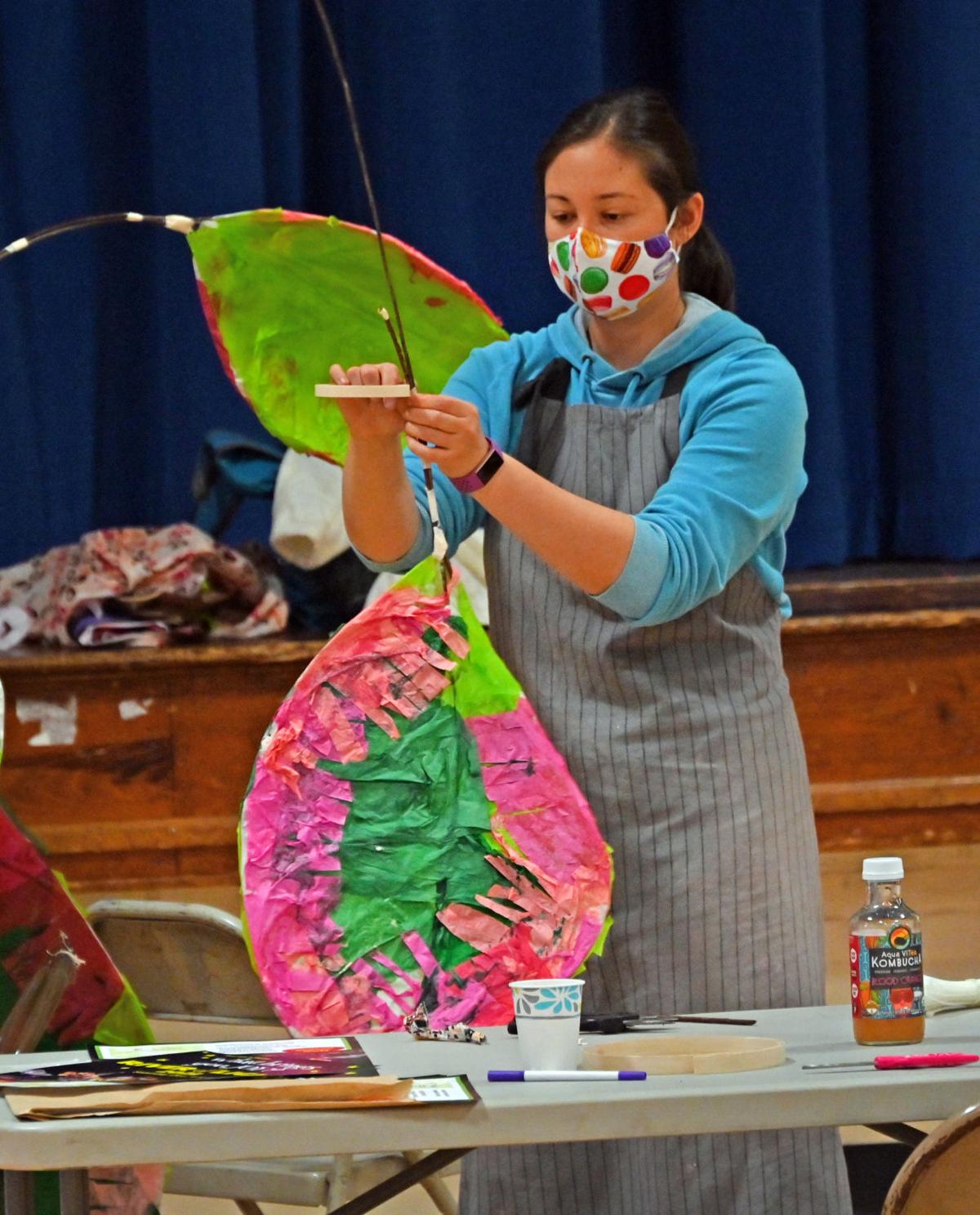 At a recent weekend workshop, Chiyomi McKibbin works on a large lantern for this year’s River of Light lantern parade set for 5 p.m. Dec. 4 in downtown Waterbury. 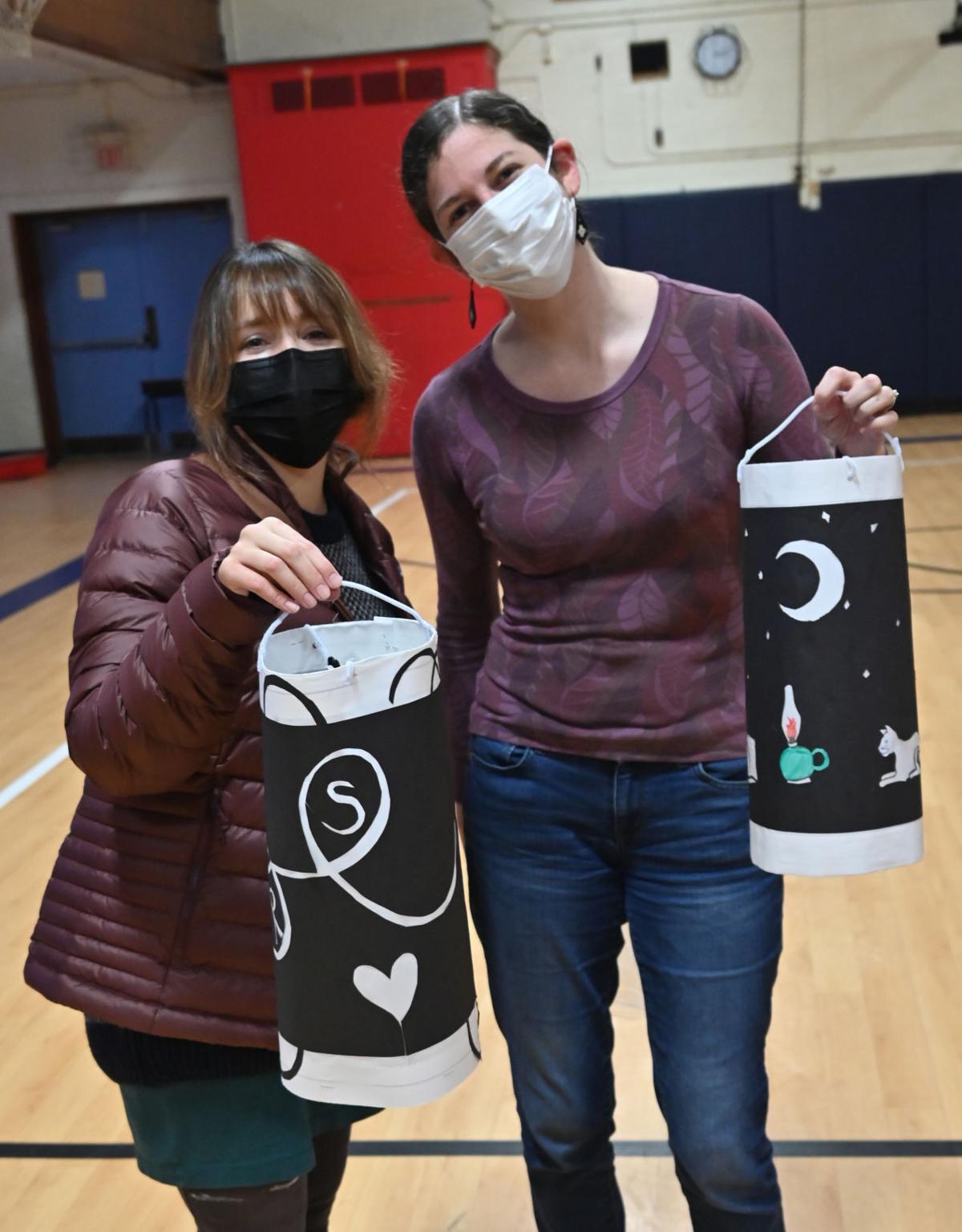 {Maxine and Cailyn McGowan are happy with their creations at the lantern workshop. 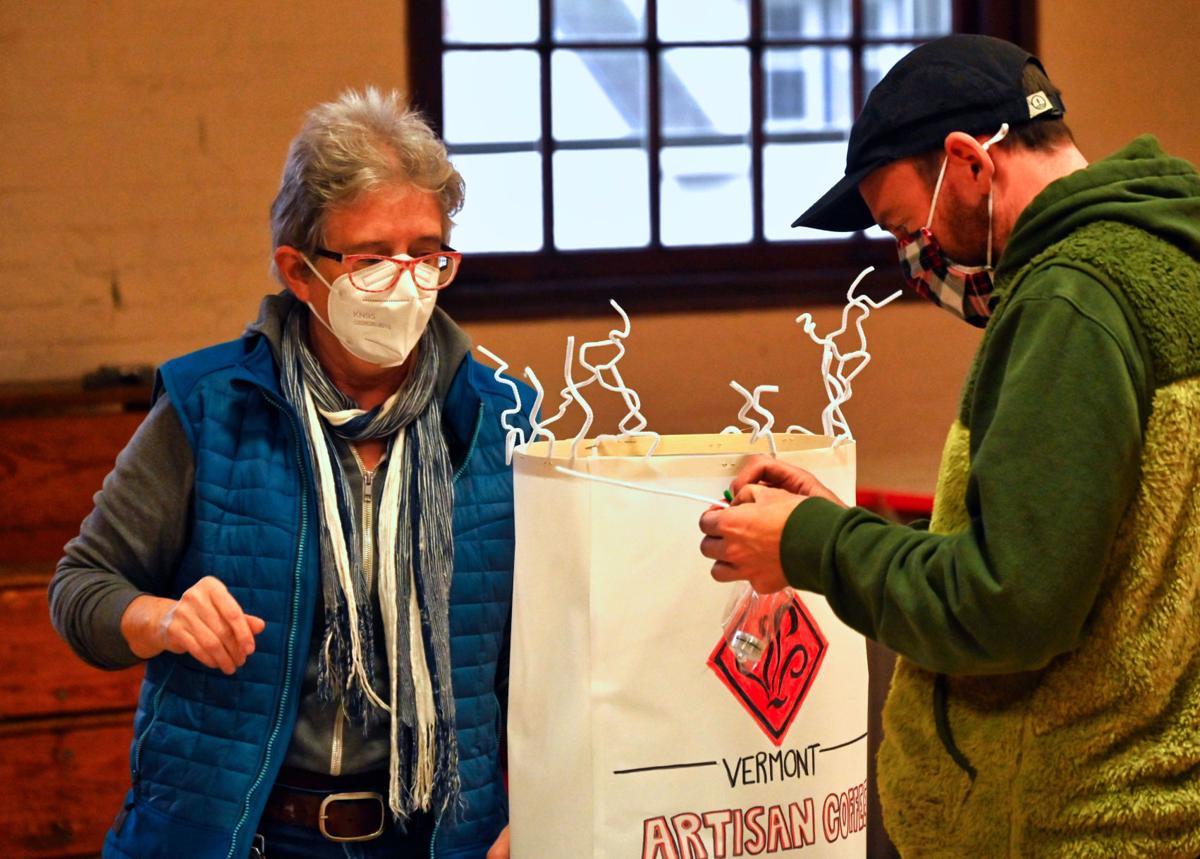 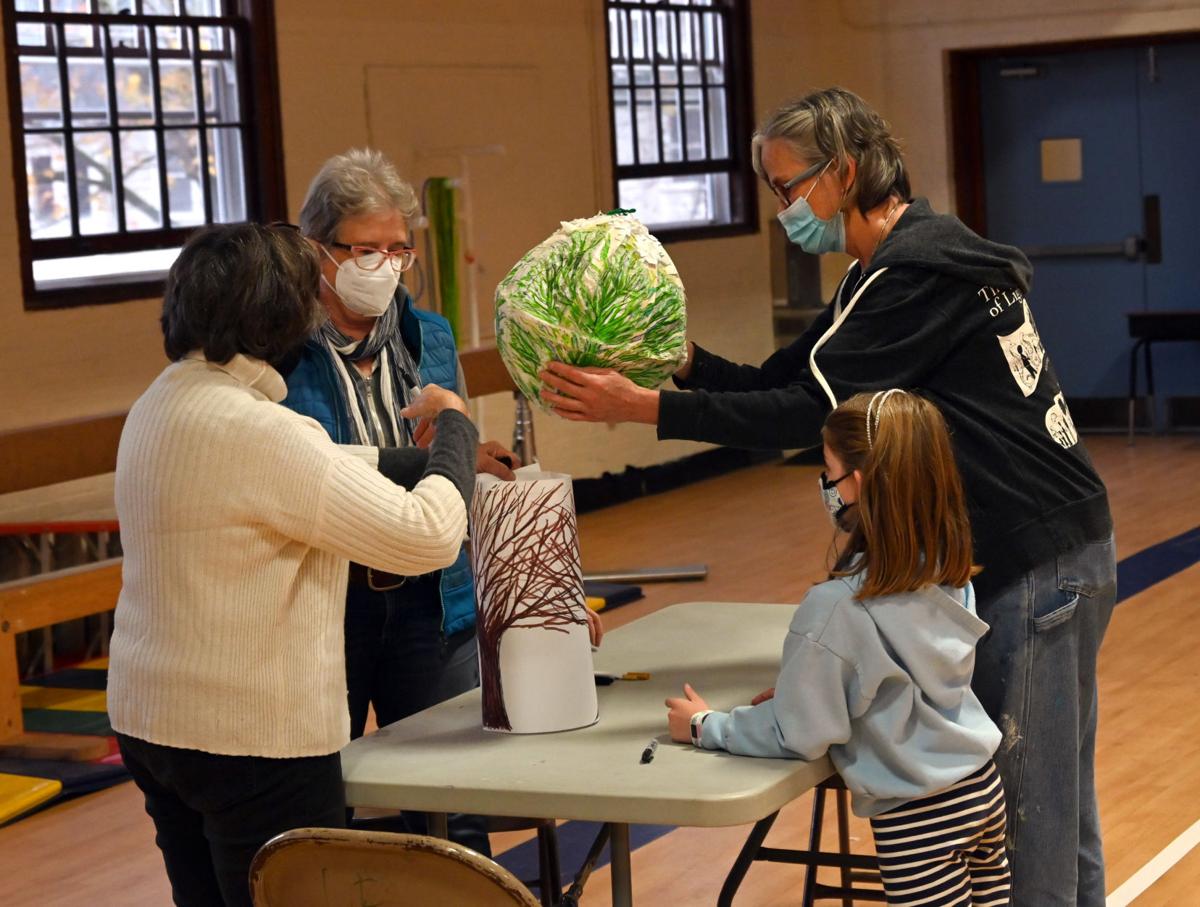 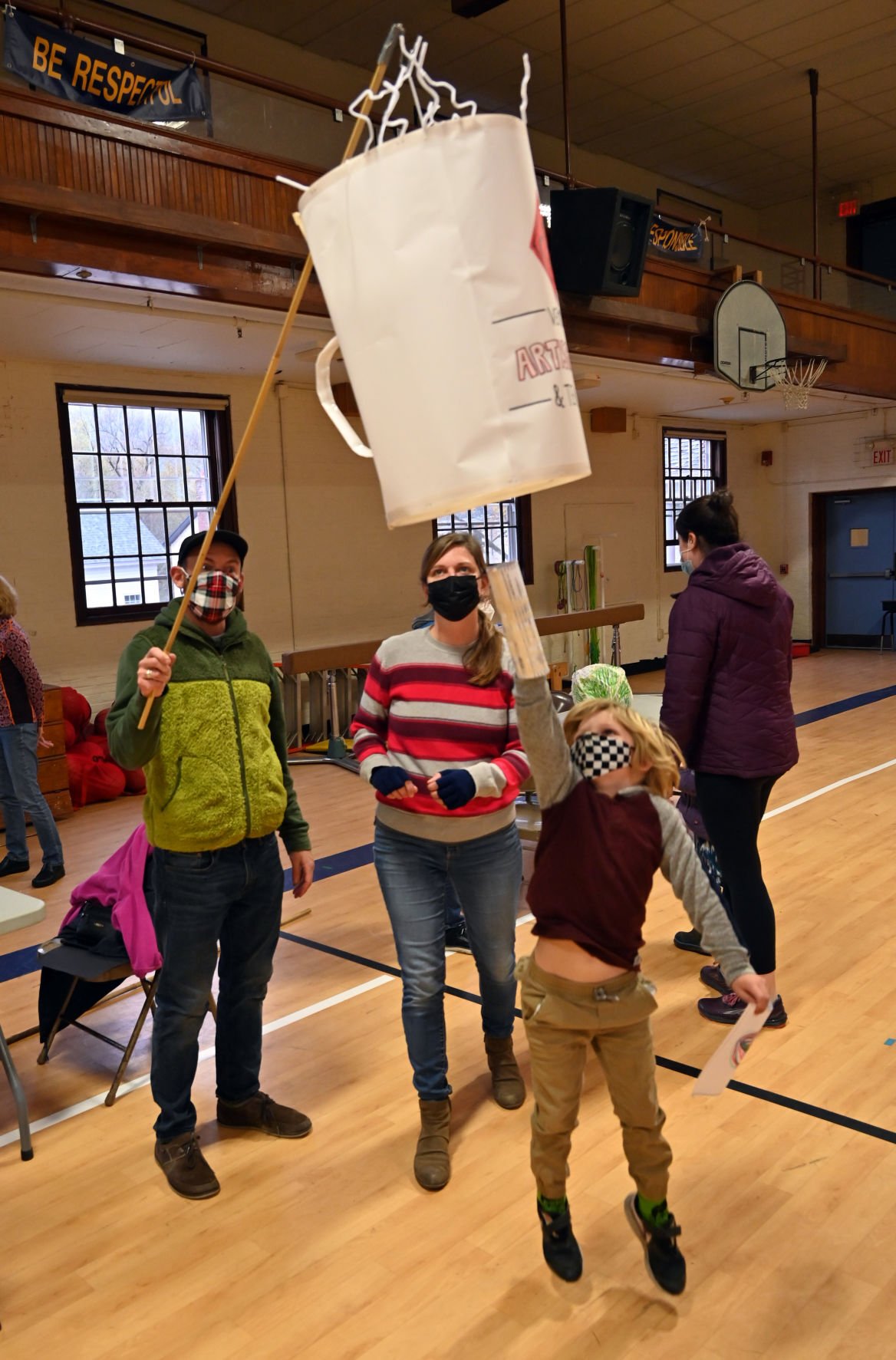 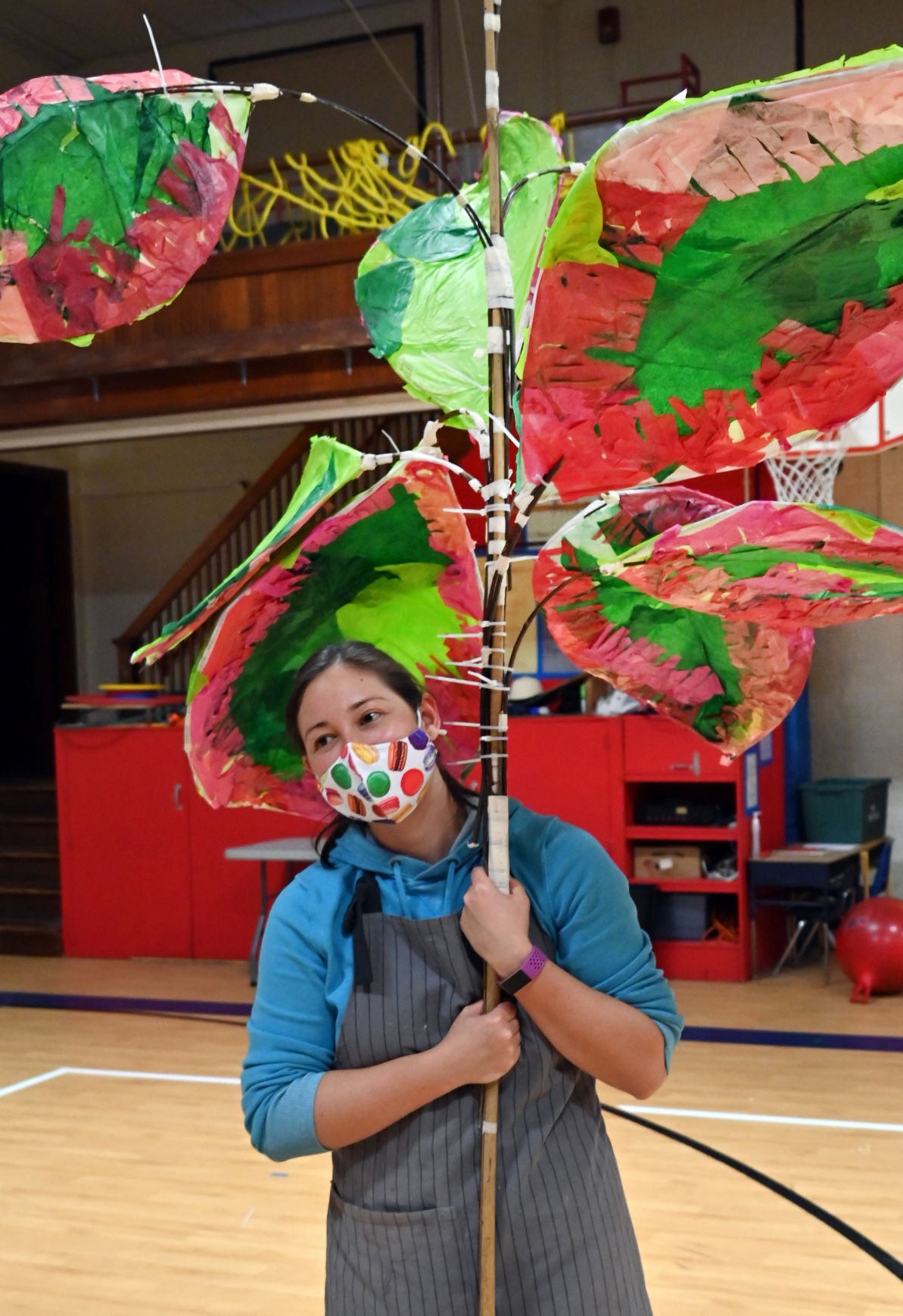 {div}Community members create lanterns that will stand out among the smaller ones made by the primary school students. Chiyomi McKibbin’s is especially colorful.{/div}

At a recent weekend workshop, Chiyomi McKibbin works on a large lantern for this year’s River of Light lantern parade set for 5 p.m. Dec. 4 in downtown Waterbury.

{Maxine and Cailyn McGowan are happy with their creations at the lantern workshop.

{div}Community members create lanterns that will stand out among the smaller ones made by the primary school students. Chiyomi McKibbin’s is especially colorful.{/div}

After last year’s drive-through event, organizers, students, and community members are excited for the River of Light lantern parade to be back in person this year with people carrying their hand-made lanterns through town.

We all could use a little joy in our lives, especially during a global pandemic. That is why this year’s parade theme — “What Brings You Joy” — is uplifting for many who have been working on making new lanterns with the parade coming up on December 4.

Now in its 12th year, the River of Light was started in 2010 by MK Monley, the former art teacher at what is now Brookside Primary School, and artist Gowri Savoor who proposed the idea for making lanterns and putting on a parade.

“I said yes to Gowri, we put on the parade in December of 2010 and the rest is history. It just kept growing and growing after that,” Monley said.

Each year before the parade, students at the primary school make lanterns in art class to go with the theme of the parade. Monley retired in June but is still working with the students and as a mentor to carry on this tradition.

In addition, weekend workshops this month have had community members making lanterns as well. The November 6 workshop was geared for those who wanted to make large-scale lanterns. Monley said about 15 people showed up, all making unique lanterns.

The only thing these lanterns have in common is that they bring a smile to the face of the person making it.

Inspiration for the theme

The theme this year was inspired by a young man by the name of Finbar Ciappara, more notably known as Santa Fin. Fin, 31, is from Central Vermont and he was born with a rare form of Spina Bifida. His mother, Suki Ciappara, explained how he is primarily nonverbal, communicating mainly with his iPad, though Suki said he can speak about 25 words.

What brings Fin joy is being Santa Claus and he has been a certified professional Santa in Vermont for four years. “Fin really wanted to be a Santa about 10 years ago,” Suki said. “About six years ago now, Fin insisted he wanted to go to Santa school. So I started looking up all the Santa schools and all of them pretty much rejected us. Except for this one guy, Santa Tim.”

Fin attended The International University of Santa Claus facilitated by Santa Tim Connigan in Philadelphia along with his mom, who calls herself the mother of Santa or “Mama Claus” as she’s labeled on Fin’s website santafin.com, created by his sister Rose. Fin and Suki graduated with bachelor’s degrees in “Santa Claus-ology” as his mother said.

His dream was to work in a mall which came true after he returned from Santa school.

“The main dream was working at the Berlin Mall because Fin used to walk around the Berlin Mall and see the Santa chair and go ‘oh that’s where I want to be,” Suki said. “And then the dream came true, he was hired. We would usually work the Black Friday weekend after Thanksgiving and all our friends with special needs in the area of Central Vermont would come and see us and it turned into kind of a thing.”

Once that dream was achieved, Fin had a new goal. “I want to be Santa in a December parade. I want to ride in my Santa’s sleigh,” Fin said.

Fin and Suki had been to the River of Light parade a few times and really enjoyed the beauty and magic that surrounds it. “I always thought it was the most beautiful parade and as soon as Fin said he wanted to be in a parade that was my absolute first choice,” Suki said.

Suki approached Monley to see if Fin could be Santa Claus in the lantern parade. Noting that the parade was nondenominational, Monley wanted to talk with her team to figure out how they could make this happen. That led to creating the theme “What Brings You Joy” as it will mean something unique to each participant.

Playing Santa Claus, Fin’s mission is to spread joy and happiness. He said he feels very honored that he could inspire this year’s theme and his excitement for the parade is clear.

“Fin just likes people to be happy. I think it’s hard for any of us to find what it is that we really love doing. Why are we here, what is our goal, and what are our reasons for doing the things we do? And I think Fin’s really found that. Like he really loves being a Santa,” said Suki.

Joy can be different for everyone. Monley mentions her love for tulips, one of her students who love video games. One youngster couldn’t decide.

On Dec. 4, Santa Fin will be riding on his sleigh in the parade with several lantern presents attached to the back. He will be accompanied by his mom as Mama Claus and his sister as “Head Elf.”

“We’ve done moon and star lanterns and I’ve built a bunch of lanterns shaped like presents and MK is going to put them somehow on the back of the sleigh,” Suki said. There are plans coming together for a few folks to dress as reindeer and even a few extra elves to walk along. “I hope and pray we can pull this off. I’m so nervous right now. I just want to see his face when he’s going down the road,” Suki said of her son.

Jen Campbell attended the large-scale lantern making workshop and is the one making the cardinal that Monley mentioned. Campbell said she hopes to make a pair of cardinals by Dec. 4. She said the idea came to her the day of the workshop as she saw her partner putting up their bird feeder. “I said that’s what I’m gonna do — I’m gonna do a bird,” she said.

A Waterbury resident, Campbell teaches art at Rumney Memorial School in Middlesex and East Montpelier Elementary School. She has been involved in the parade since 2011 after being an attendee for the first year.

“It is really satisfying making a lantern, but when you are out in the streets and walking in the parade and walking through the crowds of people that come out to watch, it is pretty exhilarating and joyful. It’s such a community event that it feels so wonderful,” Campbell said.

Explaining the lantern making process, Campbell said the materials – long strips of willow and masking tape for the skeleton of the lantern – are simple to use. Additionally, the assistance from MK and the other organizers – Sarah-Lee Terrat and Mame McKee – make the process doable.

“I was pretty successful my first year. I made a bumblebee and so the shapes were relatively simple enough for my first time doing it,” Campbell explained. “I also had guidance from the artists who started this, Angelo Arnold and Gawri Savoor, and also from MK, Mame, and Sarah-Lee were there to help guide me with how big to make my structure, how strong, or what would strengthen it.”

Puja Senning also attended one of this year’s workshops along with her daughter. Senning is a psychotherapist living in Duxbury with her husband and two daughters with a third child on the way.

“I think this is our third or fourth year doing it. The year before last I brought my daughter and then we brought her again this year because she loves art,” Senning said. “We love the parade, we’ve been going since we moved to Waterbury.”

Both Senning’s and her daughter’s lanterns are coated in silhouettes with different geometric designs, swirls, and hearts. Senning said her daughter loves to draw, so having their lanterns full of drawings and designs is what brings them joy.

“I feel that between the pandemic and the political divisiveness that enveloped our country for the last couple years it’s been pretty necessary to really cultivate and seek out those things that make us joyful,” Senning said, adding that the parade gives people an opportunity “to gather around creativity.”

“It’s really beautiful to see all these lanterns lit up and like a river moving through our town,” she said.

Monley agreed, recalling how last year’s event featured lanterns on display and people were able to drive past them to avoid gathering due to the COVID-19 pandemic. “I think it is just a fun tradition when it is really dark out and it’s winter, but people still want to get together and celebrate,” she said.

This year the parade will start at the State Complex in the front horseshoe driveway instead of the primary school. Monley said there is plenty of parking nearby. Students will take their lanterns home from school and pick up poles to carry them at the parade start. Starting time is 5 p.m. sharp with the parade ending at Dac Rowe Park. More information is online at ariveroflightinwaterbury.org.

Community News Service is a collaboration with the University of Vermont’s Reporting & Documentary Storytelling program.