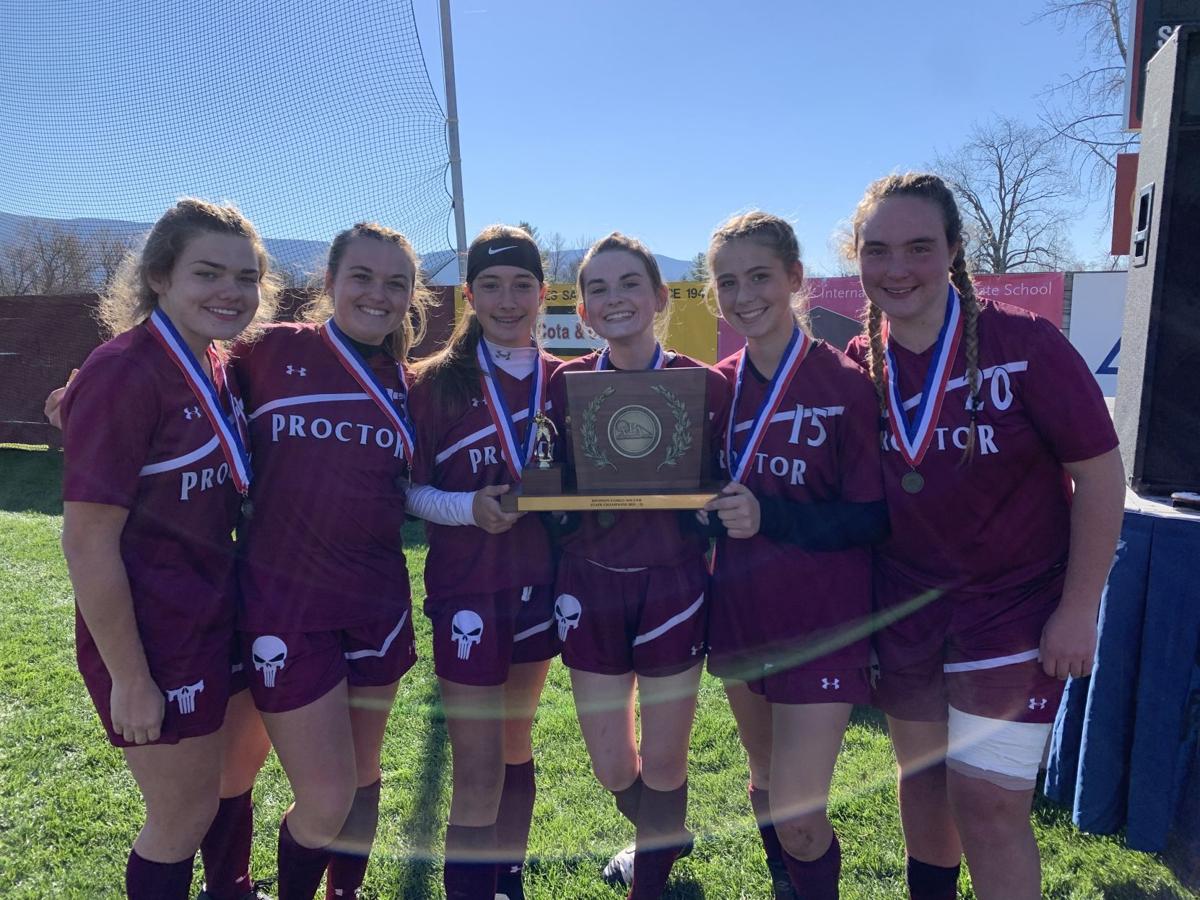 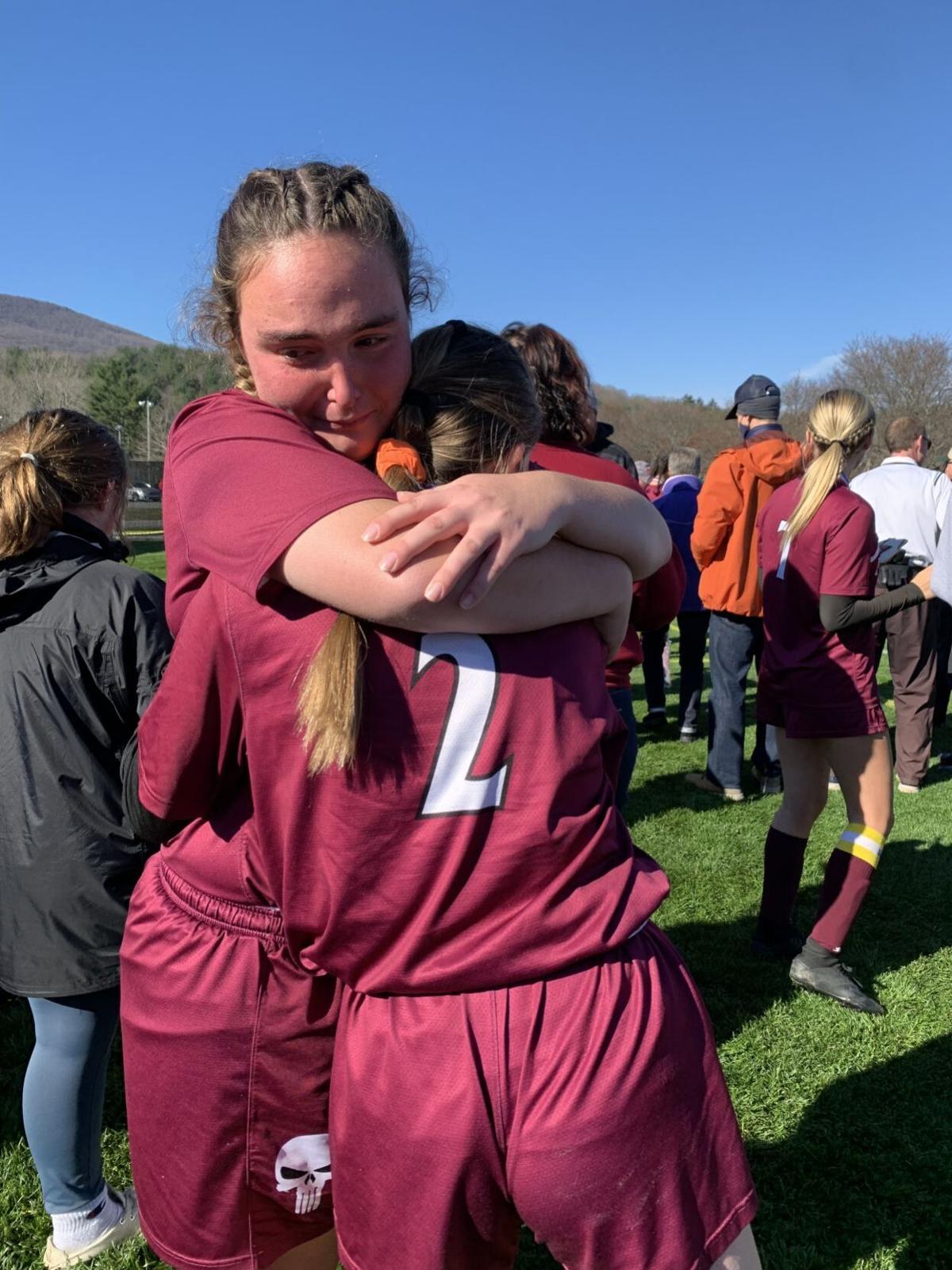 PROCTOR — If you don’t know Katelynn Regula, the first thing that strikes you about her is that her gait is different.

Then, it’s not. As you get to know her, it is not her legs or her feet that you notice. It’s her heart.

The three-sport athlete won’t give you a name for her affliction. She is totally against labels.

“I don’t want to be seen as a label. I don’t look at myself as being different,” Regula said. “It’s a weakness in my legs.”

Her parents Chuck and Becky Regula never saw her as different, either. They would not let her see herself that way. They ran the 3.1-mile segment of the Crowley Brothers Memorial Road Race with her from the time she was 9 or 10 years old.

They brought her to the Polo Fields in Rutland Town at a much younger age than that for youth soccer.

She is grateful for the way her parents treated her.

“I don’t want things handed to me,” Regula said. “I just have to work harder at different things.

She did not look at finishing the Crowley as being a greater accomplishment for her than it was for any other runner.

“I don’t think it was tougher for me than it was for anyone else,” Regula said.

“She is a great role model for a lot of other kids for her perseverance and toughness,” Proctor High School Athletic Director Jake Eaton said.

“We don’t think of her any differently. She does everything we ask,” Proctor girls soccer coach Chris Hughes.

“She also has a very high soccer IQ.”

Regula has been a member of five state championship teams with the Phantoms — three straight in soccer and two in basketball.

She regards the one that the Phantoms won in soccer on Nov. 6 as the most special so far because it was the realization that the last chapter had been written for soccer.

Soccer is her favorite of the three sports but she experienced a thrill last spring when she was the winning pitcher against Leland & Gray in softball.

“One of the challenges in coaching softball is selecting the day’s pitcher based on their strengths to go up against opponents,” Proctor softball coach Abby Bennett said. “Katelynn is a very confident pitcher and prevailed against Leland & Gray.”

“She is very dedicated and works so hard and everyone on the team loves her,” Proctor girls basketball coach Joe McKearin said.

When Regula was a little girl she was involved in both dance and soccer.

“I had to choose and it was soccer,” she said.

The choice of where to go to high school was more difficult for the Rutland Town resident.

“That was really a hard decision,” Regula said.

She quickly ruled out Rutland feeling it was too big.

It was between Mill River, where her father and brother Tyler went to school, and Proctor where her mother Becky was an outstanding athlete.

She shadowed students at each school, sitting in on classes.

“I went back and forth. I finally chose Proctor because it was so small. I could walk down the hallway and know everybody,” Regula said. “When I shadowed at Proctor, it gave me so many reasons to come here.”

This senior year, she is not walking down those hallways. All of her classes are at Castleton University where she is getting a head start on college.

She only comes to Proctor High School for the three sports and for theater. She recently had a part in the play Sleepy Hollow.

She had a goal to score this fall in soccer.

“I didn’t get a goal but I got an assist which is just as important,” Regula said.

“It was a very important assist. We were down some players for that game,” Hughes said.

Tyler was an outstanding goalkeeper at Mill River and went on to play soccer at Southern Maine Community College where he is majoring in the science of firefighting.

“My brother is my best friend,” Regula said.

When it was her Senior Day game this season, Tyler came down from Maine and surprised her by showing up at the game.

“My brother is the big reason I got into soccer,” Regula said.

She plans on majoring in Athletic Training or Physical Therapy.

“I am leaning toward Physical Therapy,” Regula said.

She has been a physical therapy patient since she was very young. She has been impressed by the way the field has benefited her and she would love to help others in the same way.

The first day of basketball practice is Nov. 29, then comes softball followed by a graduation ceremony.

Then, comes a whole new set of challenges on somebody’s campus.

You can bet on Katelynn Regula conquering those challenges. She might have to “work harder at different things” but she always reaches the finish line.