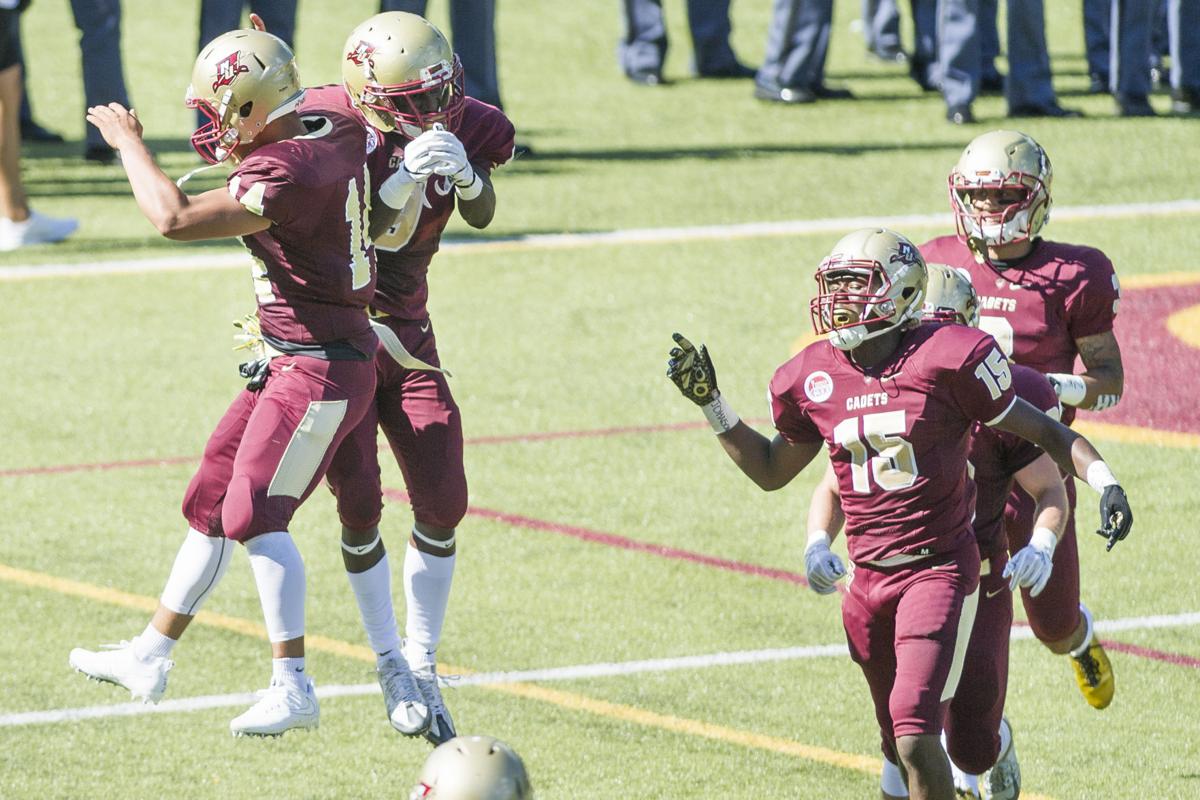 Norwich football players celebrate after a touchdown against Castleton during the 2018 Maple Sap Bucket game. 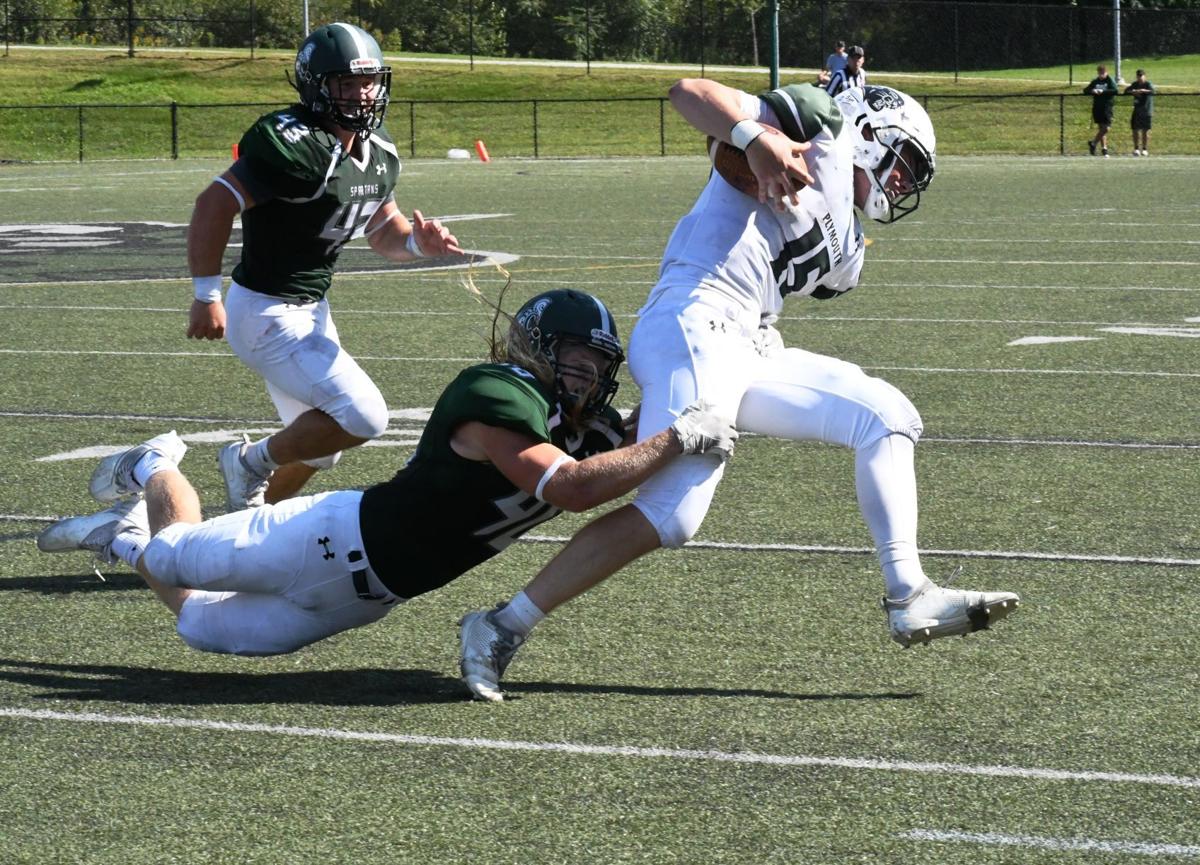 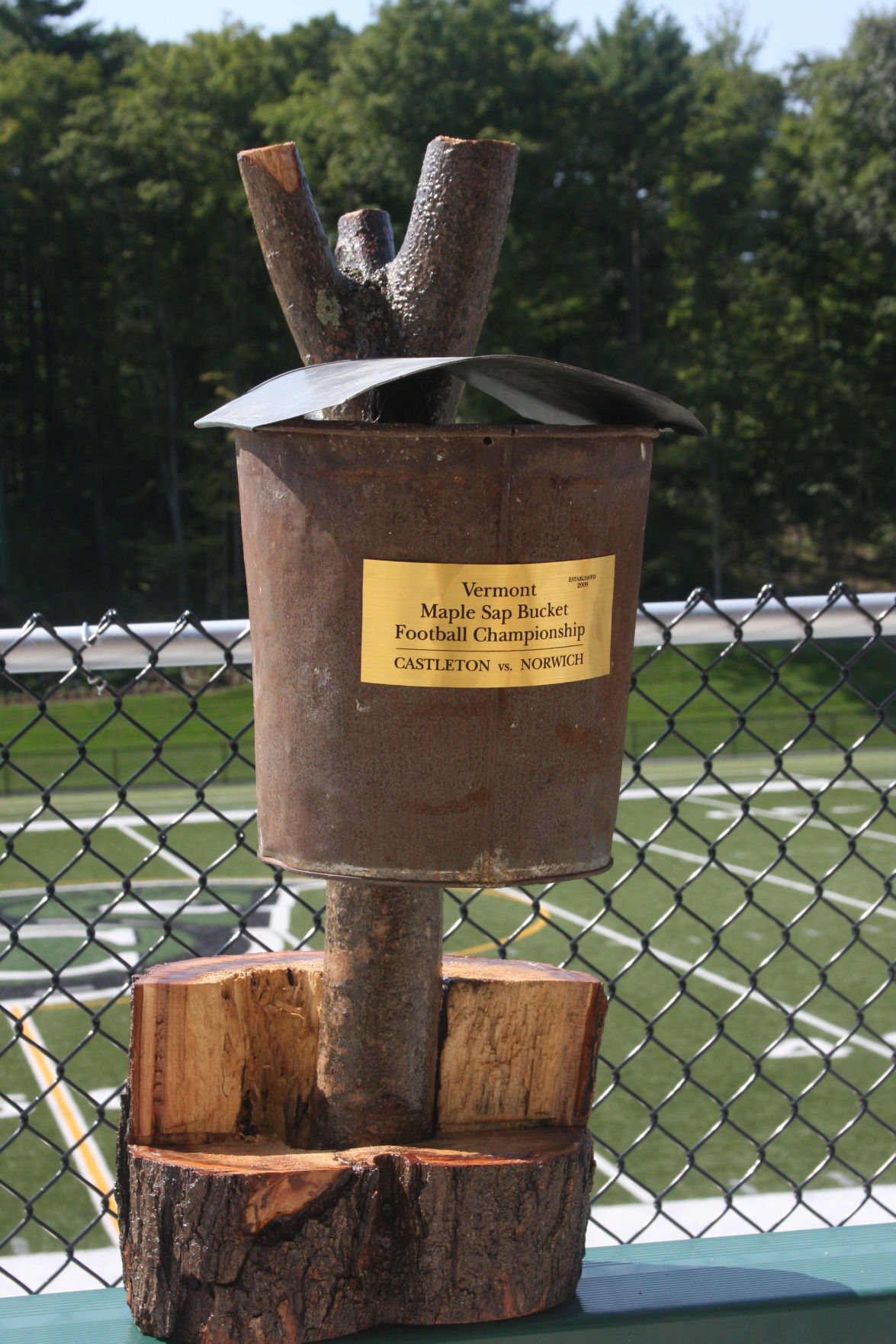 Castleton University and Norwich University face off in their annual rivalry game for the Maple Sap Bucket on Saturday.

Norwich football players celebrate after a touchdown against Castleton during the 2018 Maple Sap Bucket game.

Castleton University and Norwich University face off in their annual rivalry game for the Maple Sap Bucket on Saturday.

Justin Bryant, Trevor Chase and Sam Cartmill know all about winning football. That’s pretty much all they did was win at Marshwood High in South Berwick, Maine. The dynastic Hawks have won five of the last six state championships.

Now, they are experiencing the other side of football. They play for a Norwich University football team that is 0-2 and has been outscored 75-7.

Saturday, the “Marshwood Three” could bring back that winning feeling by upsetting 2-0 Castleton University in the Maple Sap Bucket Game at Castleton’s Dave Wolk Stadium.

It’s a tall order. Castleton has not allowed a point this season, blanking Plymouth State 13-0 and Fitchburg State 35-0.

That defense has become a source of pride but the offense is also clicking. Against Fitchburg State, quarterback Jake McCarthy completed 17 passes in 28 attempts for 242 yards and four touchdowns. He has yet to be intercepted this season.

The leading tacklers on that defense are Seth Gewanter, Chris Rice, Dustin Rock and Jayson Gilsinger.

The entire defensive unit has been a rock but CU coach Tony Volpone points to linebacker Spencer Kozlak as an example of one of the unsung members of the unit who might not get the recognition of some of the others.

“He is not going to jump out at the crowd because he is not very vocal. Every team needs to have a Spencer Kozlak. He is productive and low maintenance which is a coach’s dream,” Volpone said.

Volpone is not taking the Cadets lightly.

“You have to be concerned about a team looking for its first win and the hunger they have to get that first win,” the Castleton coach said.

“They have played two tough opponents and this is a rivalry game, and they have had our number.”

The Spartan defense has reaped plenty of recognition by pitching two shutouts but the offense has been impressive as well.

Quarterback Jake McCarthy has yet to throw an interception and threw for 242 yards and four touchdowns against Fitcburg State.

“The big thing about Jake is that he is physically and mentally tough,” Volpone said. “He took some shots against Fitchburg and still delivered the ball.”

“We are still trying to decide that,” Murnyack said when asked about his starting QB on Saturday.

He got a look at both Mitchell Theal and Grant Willard against St. Lawrence. Theal was 13 of 26 for 150 yards and a TD through the air. Willard went 5 of 13 for 34 yards and was intercepted.

“They each did some good things and both did some things we need to clean up,” Murnyack said.

Murnyack knows his quarterback will be under some pressure.

“We have got to know where Rice is. There are some special kids who play college football and he is one of them. Kids like him impact the game,” Murnyack said.

Norwich likes to throw the ball.

“They are more productive throwing the ball and we have to prepare for that,” Volpone said. “We can’t give up the easy completion. We have to force the ball to their second or third option.”

Murnyack said his players know what this game means to the state of Vermont.

“There used to be the Wadsworth Trophy game (Middlebury vs. Norwich) and now that Middlebury can’t play outside their league, this game is it,” Murnyack said.

Murnyack said that even though the scoreboard did not reflect it, the Cadets played far better in their second game last week.

McCarthy’s aerial game can be difficult to defend because it is so diverse. He has completed passes to 13 different receivers over the two games.

“We want to spread the ball around,” Volpone said. “If you have one receiver catching 75% of the passes, that person can be neutralized.

“Those receivers all deserve to be on the field.

“Saijon McIntosh is a perfect example. He was slowed down by injuries in the preseason and he caught two touchdown passes catches against Fitchburg.”

Marshwood High coach Alex Rotsko said that football fans in southern Maine are following Chase, Bryant and Cartmill and will have an interest in the Maple Sap Bucket.

“All three guys have the same thing in common and that’s a work ethic that’s second to none,” Rotsko said.

They hope to rediscover that winning feeling that came from playing with the Hawks back home in Maine on Saturday afternoon when the ball goes in the air at 3 p.m.

And the Spartans want very much to take back the Maple Sap Bucket and leave the field 3-0.

An hour before the Maple Sap Bucket kicks off, 78 miles away, Middlebury College opens its football season at Williams College.

The Panthers were 9-0 in 2029 and are the defending NESCAC champions.

NOTES: This will be the second trophy game in two weeks for Norwich. The Hoffman Cup was at stake last week against St. Lawrence. ... Castleton takes a four-game winning streak into the Sap Bucket, going back to the 2019 season. ... Dartmouth is in Indiana to open its season on Saturday against Valparaiso. ... The University of New Hampshire is off to a 2-0 start and ranked No. 23 nationally in the FCS Media Poll. The Wildcats are at Lafayette on Saturday. ... Rutland High’s Matt Creed is now on the field as a freshman at WPI. The offensive lineman is seeing action on special teams. WPI and RPI clash for the Transit Trophy on Saturday.