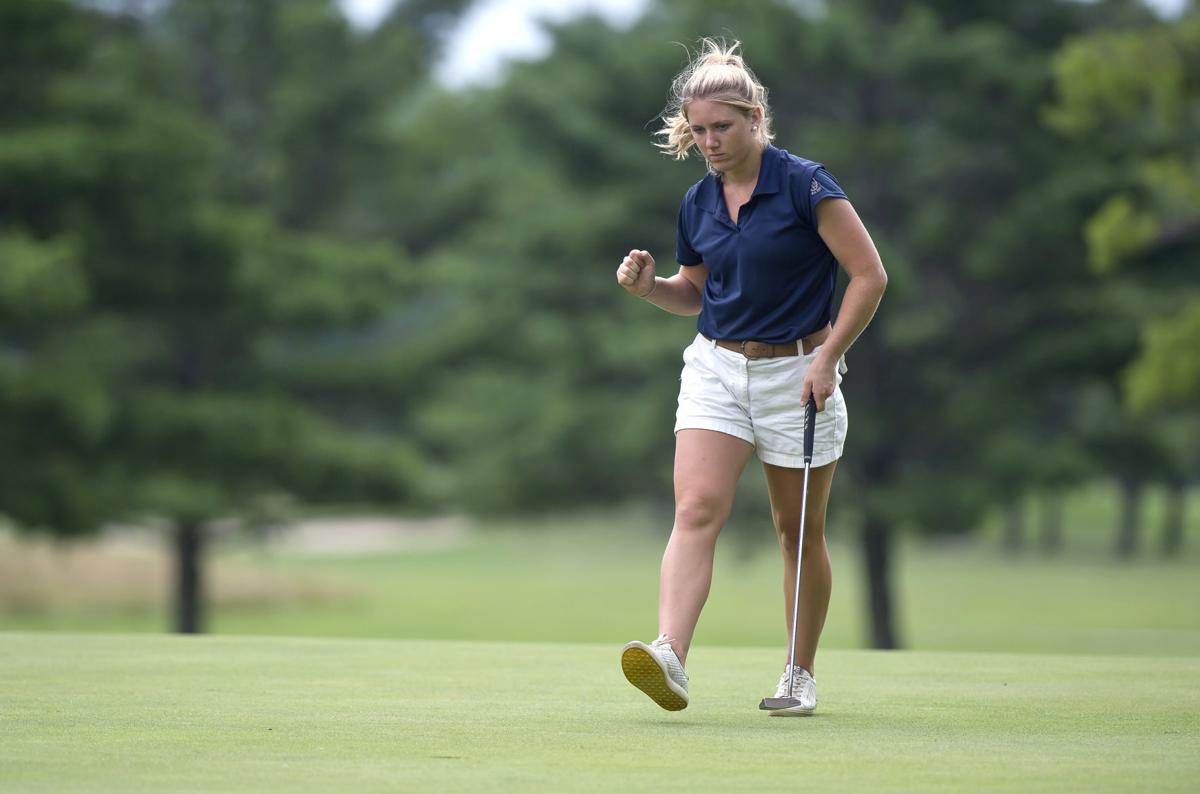 Chloe Levins reacts after rolling in a par putt on the ninth hole during the final round of the 2019 Vermont Women’s Amateur golf championship at Ralph Myhre Golf Course in Middlebury on Thursday. 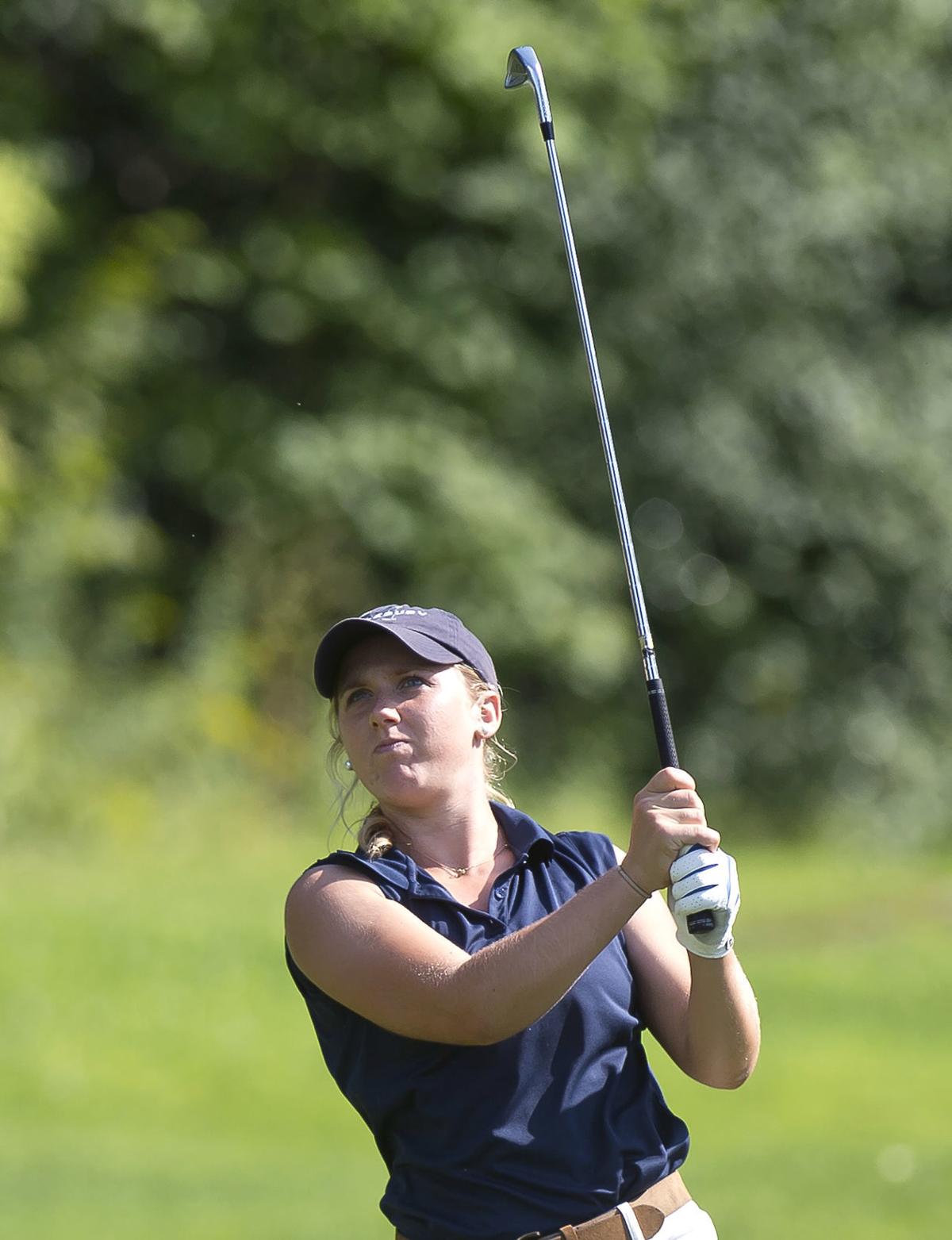 Chloe Levins reacts after rolling in a par putt on the ninth hole during the final round of the 2019 Vermont Women’s Amateur golf championship at Ralph Myhre Golf Course in Middlebury on Thursday.

Levins became the first Rutland member to win the women’s state amateur since Mae Murray in 1952, triumphing at rain-soaked Ralph Myhre by eight shots on Thursday.

“I did not know that. That’s amazing,” said Levins of Murray and her own achievement. “Cool.

“It’s satisfying because usually I have a team with me and today I was all alone,” Levins said. “I hadn’t had that big of a lead in my entire life and it was unsettling in the beginning to be sure because I like to feel pressure. Once I felt the pressure again I started to play better golf.”

That turning point in the tournament and Levins’ game came on the ninth hole, where she left her booming tee ball out to the right and under pine trees. She attempted a low runner toward the elevated green but it clipped a limb and her ball caromed into the fairway.

Levins pitched to the green and made her 12-foot par saver and, with Maurycy making back-to-back bogeys, the lead back was back to four.

“That was the hole,” Levins said.

“That punch was a little too aggressive — I wouldn’t do it again — but the wedge into that green and the recovery. ... That putt, I took a look at it and I’d already made it in my mind. I’ve had that putt before.”

Then, with Levins’ ball in the 10th fairway, the skies opened up and a driving rain appeared; moments later a brief thundershower delay was called.

But first, with the wind in her face and the ball above her feet, Levins hit a laser 7-iron from 152 yards to within tap-in range and made her only birdie.

“That was the best golf shot I’ve ever hit in my life ... it was a crazy golf shot,” she said.

Levins’ lead jumped to six shots and she was on her way.

“My partner that I play with in the Colorado Four Ball — same age — that’s exactly what she does,” Maurycy said. “She gets really aggressive and goes right for the pin for tap-in birdies or eagles. It was fantastic. You want to be part of that.”

Levins finished at 12-over 225 and Maurycy, the 2018 champion, at 233. Alburg’s Andrea Brown shot 80 for a 237 total, followed by nine-time winner Holly Reynolds, of Copley, who took fourth after shooting the tournament’s low round, a 71. She was at 239, the same number as Burlington Country Club’s Carson Laderoute, who posted 74.

Levins made her only two double-bogeys of the tournament on the front nine, losing her ball in a sea of tall grass on par-5 No. 1 after hitting her second shot off an awkward lie. She found a hazard on the par-3 seventh and took relief, then made double there as well.

Maurycy, who had birdied the sixth hole, climbed within two on the seventh and turned at 3-over 38 but tailed off in a string of five holes played at 6-over par. It could not have come at a worse time. “My longer clubs are not my strength but I’d have to say it was my chipping and my putting,” she said. “I had five three-putts (Wednesday) and a few today. It was just the feel of the greens and getting more aggressive with the putting. I just wasn’t getting the ball close enough to the hole.”

Conditions were tougher and the course played longer Thursday than any day, slowed by an overnight rain that left much of the course under water. Thursday’s play began after a two-hour delay, with the lift, clean and place rule in effect and every bunker deemed unplayable.

Levins, 21, was playing in only her second Am and it was clear the tournament is better off for having young, strong players join the fray. This year’s Am just fell at a time when she did not have to be involved in training for biathlon, where she is clearly on the way up the ladder.

She was asked if she would defend her crown in 2020.

“I don’t know my training schedule,” she said. “It all depends on biathlon training. Hopefully, I hope to, because these ladies are great.”