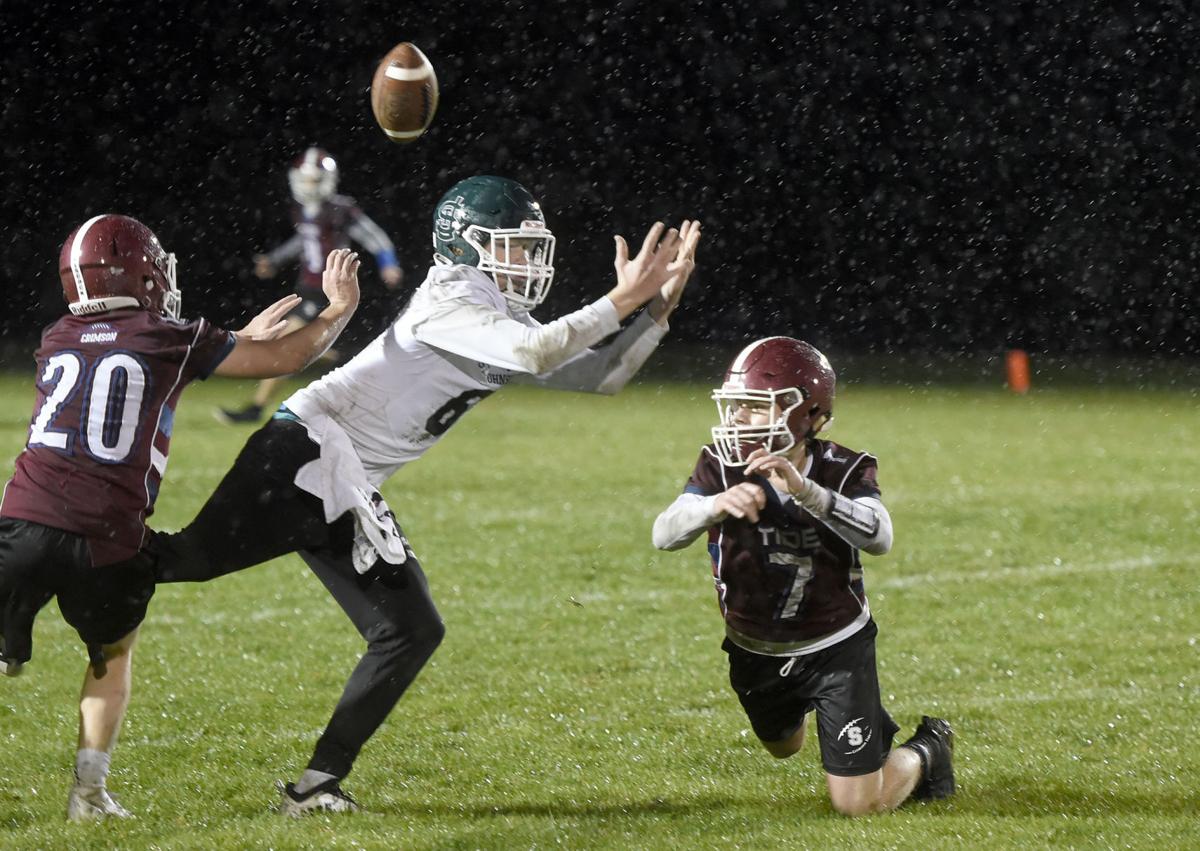 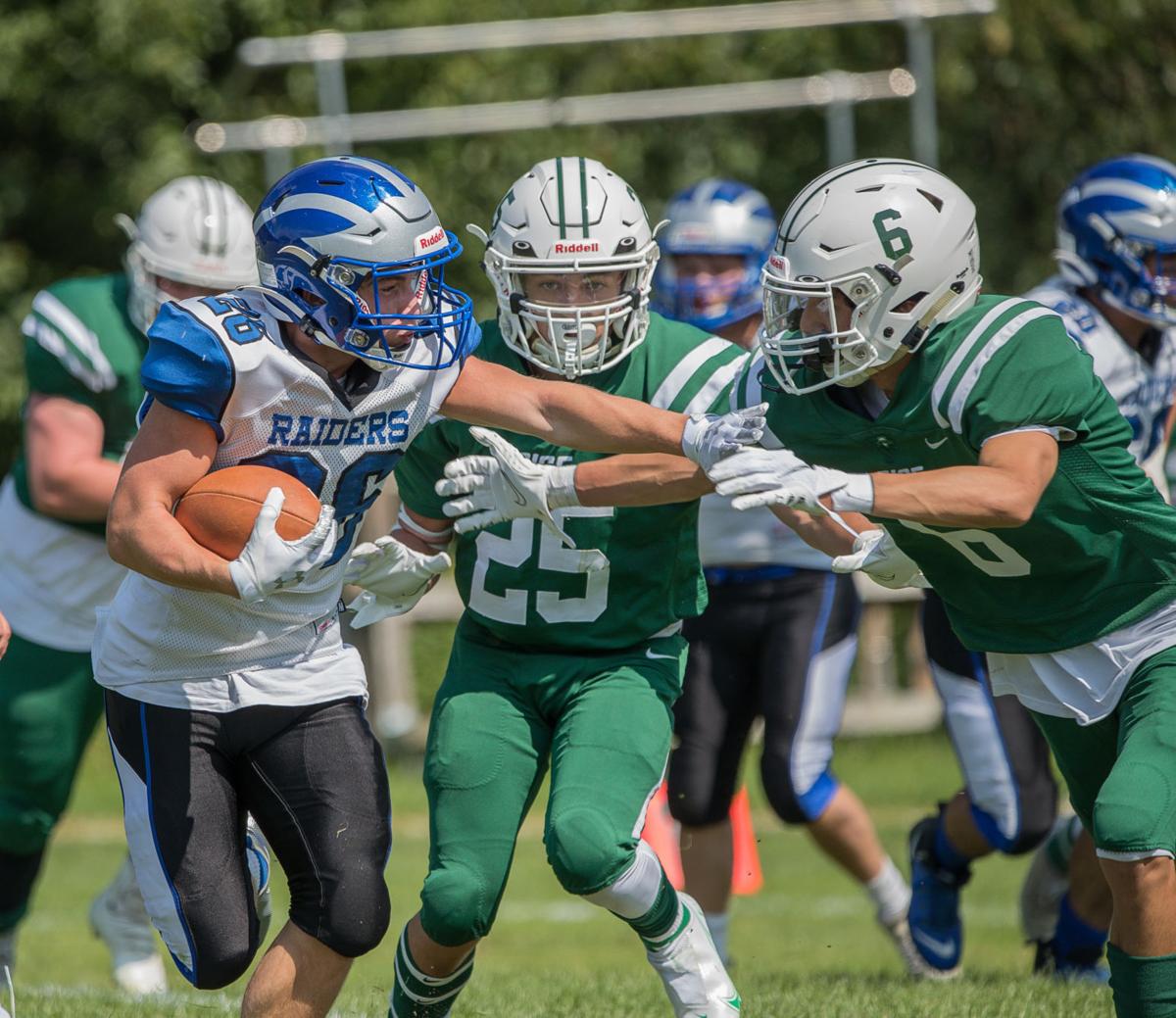 Rice players attempt to tackle a U-32 opponent during a football game.

Rice players attempt to tackle a U-32 opponent during a football game.

Don’t look now, but the halfway mark of the Vermont high school football season will arrive this weekend.

The midseason stretch is a good barometer of where a team fits in the grand scheme of the playoff push. It’s a time where a team can look at itself in the mirror and figure out how viable its championship hopes are or if the rest of their season will be focused on developing for next fall.

Teams in Vermont have run the gamut of success in the early going. There are squads like Bellows Falls and Windsor who have looked dominant every time time they have taken the field and there are others that still looking to discover a sliver of hope for the second half of the season.

Week 4 could make the picture of the playoff push less fuzzy and will help show what teams will be in the driver’s seat in each division. The calendar soon turns over to October and state championship day at Rutland High’s Alumni Field doesn’t seem as far away.

Speaking of RHS, Rutland will be competing in one of the marquee matchups that Week 4 has to offer. St. Johnsbury comes to town looking to make a statement against the undefeated Ravens.

The Hilltoppers were blown out in Week 1 by undefeated Hartford, but since then they’ve looked plenty impressive with wins against CVU and Colchester.

Last week against the Lakers, St. Johnsbury quarterback Quinn Murphy was efficient, going 20-for-23 through the air with four touchdowns.

Rutland will provide the Hilltoppers their biggest test since that Week 1 loss to the Hurricanes. The Ravens have only been getting better offensively and their defense is known for causing turnovers.

Rutland hosts at 7 p.m. on Friday.

The other big Division I matchup sees Hartford taking on Middlebury.

The Hurricanes’ 3-0 mark hasn’t been without some adversity. In their last two games, the games were close before Hartford pulled away. The Tigers hadn’t had much adversity until last week, where their defense gave up their first points and they suffered their first loss to BFA-St. Albans.

Both teams have a lot to play for on Friday in Middlebury. Hartford would love to further establish themselves as a top-tier D-I team, while the Tigers look to not fall into the middle of the pack in a division that has as much parity as any this year.

In other D-I action, BFA-St. Albans looks to build off that Middlebury win when the Bobwhites travel to play winless Burlington/South Burlington Friday night. The Seawolves are better than their record lets on though, playing Hartford even until the last two minutes in Week 3.

Burr and Burton looks to stop a two-game skid on Saturday, hosting an Essex team that is winners of two in a row. CVU travels to play winless Mount Mansfield on Saturday and Colchester hosts Division II Rice on Friday.

In Division II, Fair Haven needed a comeback to down Mount Abraham last week, but the Slaters won’t have the luxury of starting slow on Friday, hosting Bellows Falls.

The Terriers blanked Lyndon last week and before that blew out very capable clubs in Brattleboro and Mount Anthony. Fueled by a powerful rushing attack, nobody has been able to keep up with BF. It’s Fair Haven’s turn to take its best shot.

Speaking of the Colonels and Patriots, their rivalry matchup will be a highlight of the Saturday D-II slate. The Elwell Trophy will be up for grabs at Brattleboro’s Natowich Field.

Division II seems wide open, outside of Bellows Falls, so these 1-2 rivals would love to better their case for the second half of the season and win a trophy along the way.

U-32 was idle last week, picking up a forfeit win against rival Spaulding, but the Raiders are back in action Friday at Milton.

U-32’s offense has been a balanced one in early in the season led by quarterback Cameron Comstock. The Raiders would love keep their perfect record intact against a Yellowjackets squad trying to bounce back from a blowout by BFA-Fairfax/Lamoille.

Spaulding hosts winless Mount Abraham on Saturday. The Crimson Tide’s lone win came in Week 1 in a comeback win against Lyndon. Quarterback Andrew Trottier, running back Grady Chase, wide receiver Christian Titus and utility guy Zack Wilson all shined on that day and are guys to watch against the Eagles.

An unfortunate note of the D-II slate is that annual Barrel Bowl rivalry game between Lyndon and North Country was canceled due to COVID-19.

Woodstock and Poultney are teams that love to run the ball and they square off in Division III action on Saturday with the Blue Devils hosting.

The winless Thunderbirds have taken their lumps a lot this year and more lumps could be on the way. They are at undefeated Windsor Saturday afternoon. Missisquoi is a young program and games like Saturday’s will only make them better.

Springfield was the latest team to fall to the Yellow Jackets and the Cosmos hope to get back on track, at Oxbow on Saturday.

Otter Valley looks to stay in the unbeaten ranks, hosting Mill River Saturday on Homecoming weekend at the school.

Sophomore quarterback Luca Polli has picked up right where his older brother Alex left off under center. His favorite target Brady Diaz has been one of the most productive wideouts in the state.