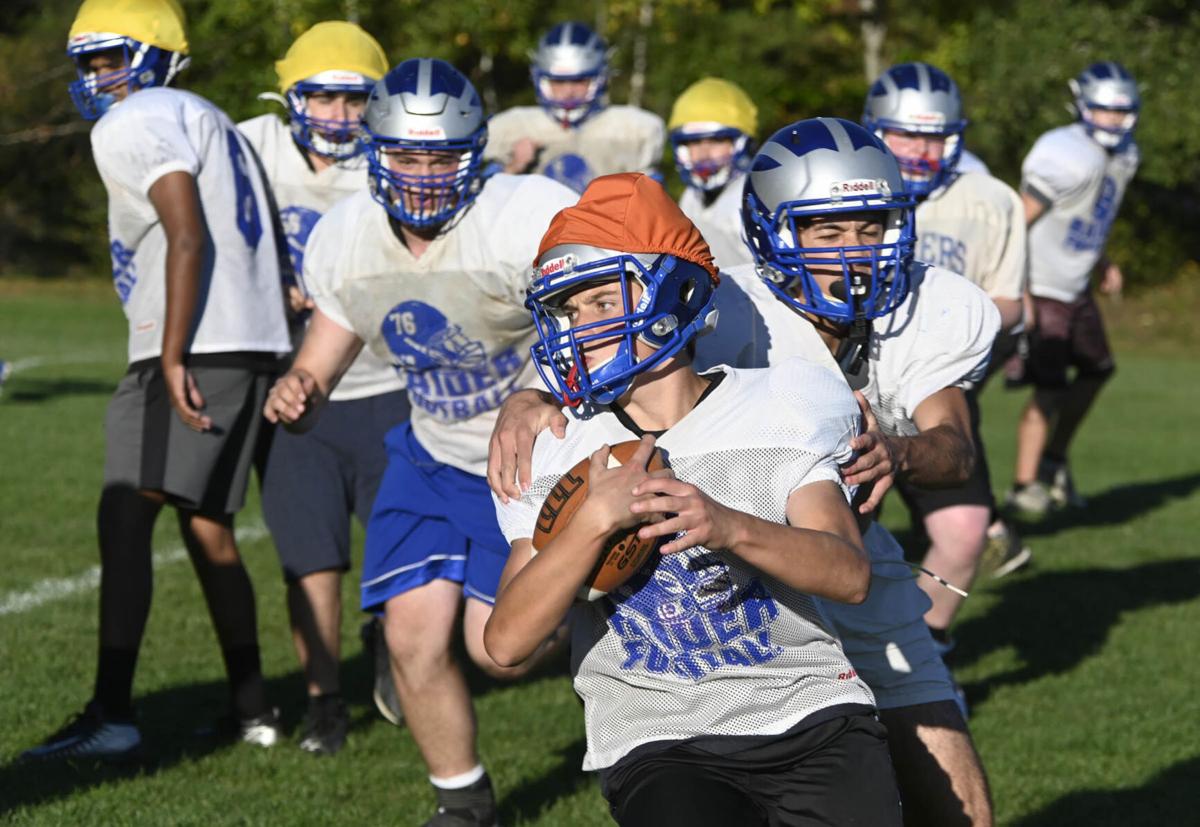 U-32’s Daniel Yaegar attempts to escape the defense of a teammate during football practice at the school. 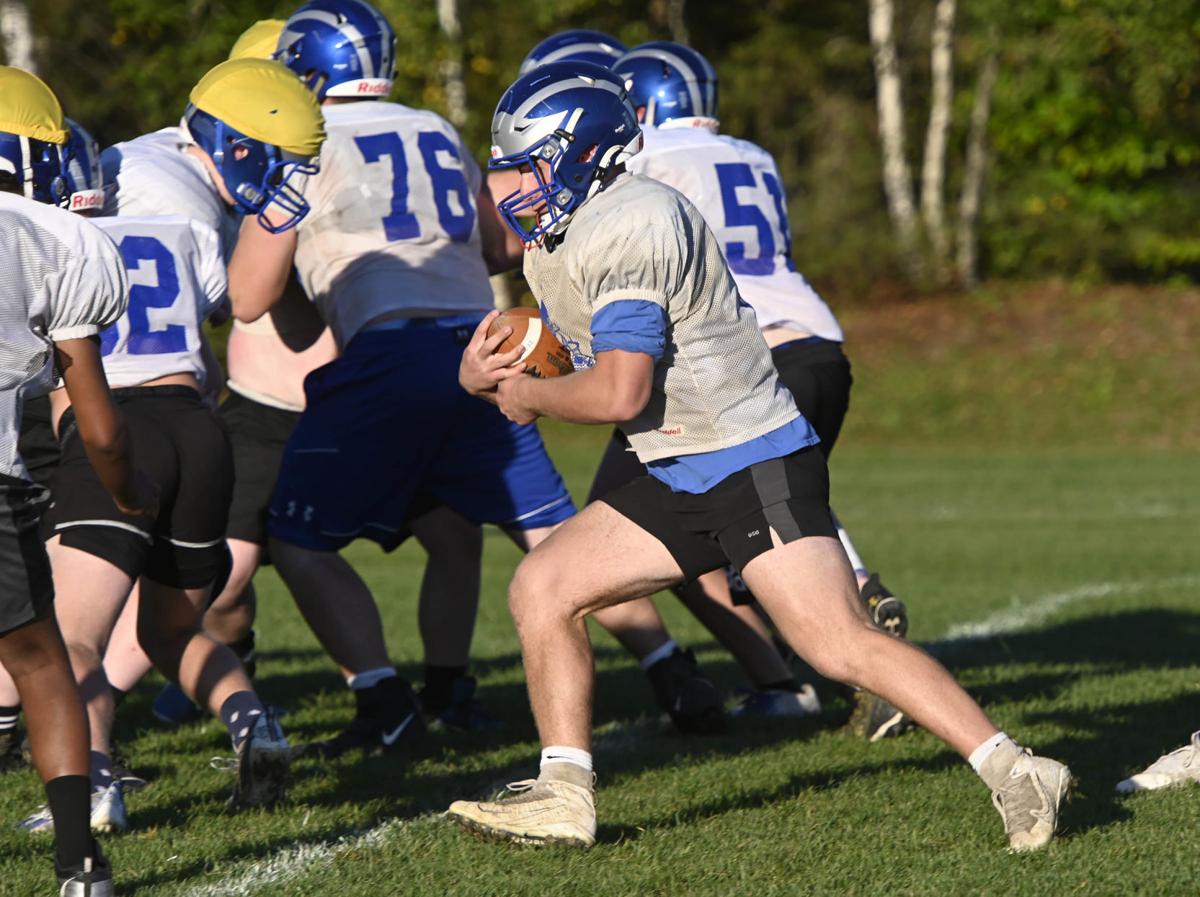 U-32’s Henry Beling looks for a hole in the line during football practice at the school. 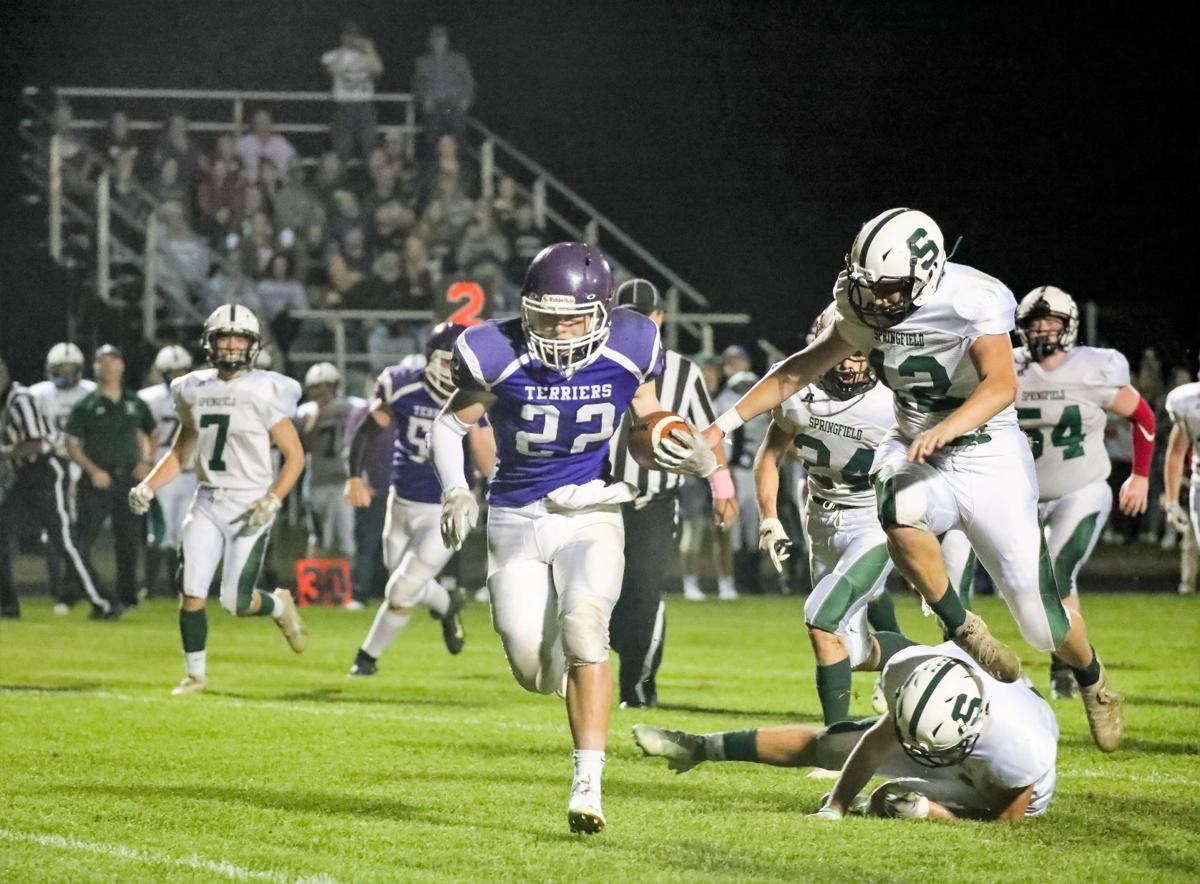 Bellows Falls’ Jeb Monier heads toward the end zone with a 31-yard run as Springfield’s Carson Clark hurdles players in an attempt to catch his opponent last Friday.

U-32’s Daniel Yaegar attempts to escape the defense of a teammate during football practice at the school.

U-32’s Henry Beling looks for a hole in the line during football practice at the school.

Bellows Falls’ Jeb Monier heads toward the end zone with a 31-yard run as Springfield’s Carson Clark hurdles players in an attempt to catch his opponent last Friday.

If you want the playoffs to run through your home field, there’s one thing you have to do – win.

Three Vermont high school football teams have done that better than anyone else this fall and look to cap off a storybook regular season this weekend.

Division I Rutland, Division II Bellows Falls and Division III Windsor have a shot at going perfect in the regular season with a win.

The Ravens probably have the toughest test of the three to claim perfection, with Hartford coming to Alumni Field Friday Night.

If Rutland has been the 1A of southern Vermont D-I football this fall, Hartford has been the 1B. The Hurricanes’ lone loss of the season came in Week 4, when they were stifled by Middlebury.

Before then, they were winners of three straight and after that they’ve been winners of three in a row. In multiple games this season, Hartford has had to battle late in close games to win, so they are as tough as they come.

Rutland coach Mike Norman noted after last week’s game against Colchester, just how well the teams know each other, so there won’t be a ton of surprises on Friday.

The Ravens will want a lot more of what they had last week with a dominant offense and stout defense. This week will provide them the biggest test yet to maintain that standard.

Both offenses can provide fireworks on the football field, so Friday could be the showdown of showdowns with so much on the line.

The Terriers have been as dominant as any team could be this fall. No team in Division II has come close to touching them. To put in perspective their dominance, the team that has arguably proven to be the next best D-II team, Mount Anthony, lost to BF by 31 points earlier in the season.

The closest margin of victory for Bellows Falls was 29 points. They are the heavy favorites in D-II and a perfect regular season would be another feather in their cap.

“Make no mistake, I want a championship,” Moore said to Shaban. “It’s as simple as that.”

Windsor has perfection on the mind in D-III and need to beat Woodstock on the road on Friday to accomplish it.

The Yellow Jackets are no stranger to this pressure, having had perfect seasons in 2016 and 2017.

Much like BF, no D-III team has really been able to hang with Windsor this season.

The team that did the best job of doing so was BFA-Farifax/Lamoille, who put up 35 points on Windsor last week in a battle of unbeaten teams.

Even then, the Yellow Jackets’ offense dominated with 54 points.

Woodstock has a lot to play for with the No. 3 seed in Division III still in sight if it wins and Otter Valley loses.

CVU looks to lock up a high seed in the Division I playoffs, playing at Essex on Friday. The Redhawks were off last week, but are winners of three straight including wins against Middlebury and BFA-St. Albans. The Hornets would love to play spoiler and build their own playoff resume in the process.

Burlington-South Burlington’s multiple-touchdown win against St. Johnsbury last week showed how dangerous the Seawolves could be if they sneak into the playoffs. They look for their third win in a row, hosting one-win Mount Mansfield on Friday.

Middlebury and Burr and Burton were both winners in Week 7. The Bulldogs need a win to keep any hope of a playoff appearance alive. The Tigers are looking to lock up a home playoff game. A win on Friday in Manchester at the beautiful Applejack Stadium would do just that.

After a 3-1 start, BFA-St. Albans has sputtered late in the season with consecutive losses. The Bobwhites’ stout defensive reputation has taken a bit of a hit, but a matchup with one-win Colchester to end the regular season could be a perfect bounce back opportunity. The Lakers host on Friday.

St. Johnsbury and Lyndon play a cross-division game on Saturday with the Hilltoppers hosting. Both clubs are coming off losses. St. Johnsbury fell to Burlington-South Burlington by a trio of touchdowns last week and the Vikings struggled to score against U-32.

A win for the 3-3 clubs would go a long way to improving their playoff seeding.

Brattleboro has surged late in the season with a pair of wins in a row. The Colonels have a tough home matchup against Rice on Friday.

Spaulding was dominant last week against North Country, but should have a bigger test this week with Milton, a team that outlasted Mount Abraham last week. The Crimson Tide host on Friday.

North Country is at U-32 on Friday. The Raiders leaned on their defense to beat Lyndon in Week 7 and will hope to do the same against a Falcons team that has struggled to score this year. U-32 hosts on Friday.

In Division III, Otter Valley’s 41-35 overtime win against Woodstock put the Otters in the driver’s seat for the No. 3 seed, but they need to take care of business this week against Springfield, and if not, get some help from Windsor, to make that a reality.

OV coach Kipp Denis notes how the Cosmos are a very similar team to his and that makes Springfield a team Otter Valley can’t take lately Saturday night in Springfield.

Mill River has found some late-season success, winning two of their last three games. The Minutemen would love to grab their third win, playing at Poultney on Saturday.

BFA-Faifax/Lamoille looks to bounce back from its first loss, hosting Oxbow on Saturday.

This time next week, we’ll have playoff football on the mind.