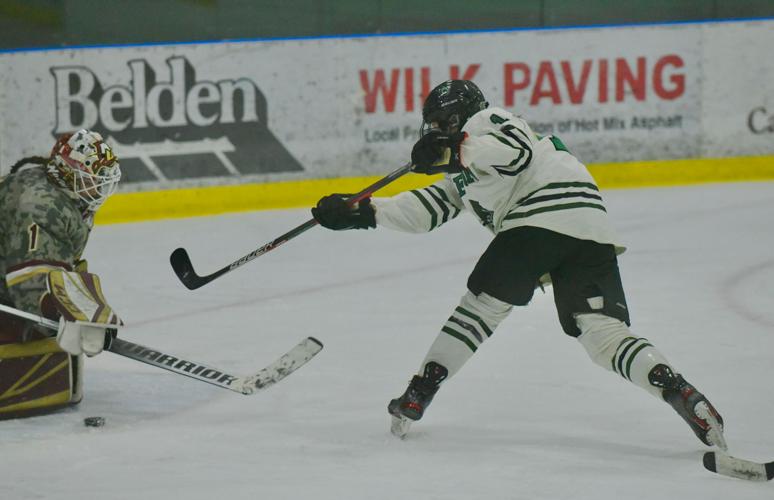 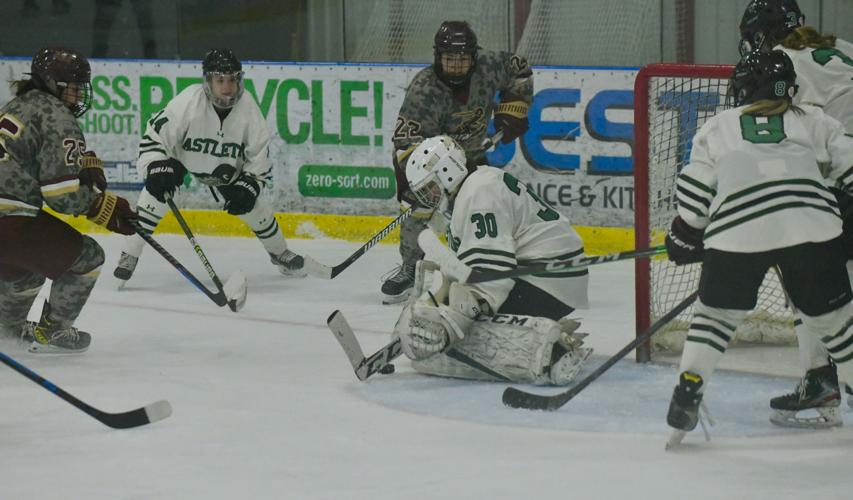 Castleton goalie Kirsten DiCicco (30) makes a save during Castleton’s matchup against Norwich at Spartan Arena in Rutland Town. 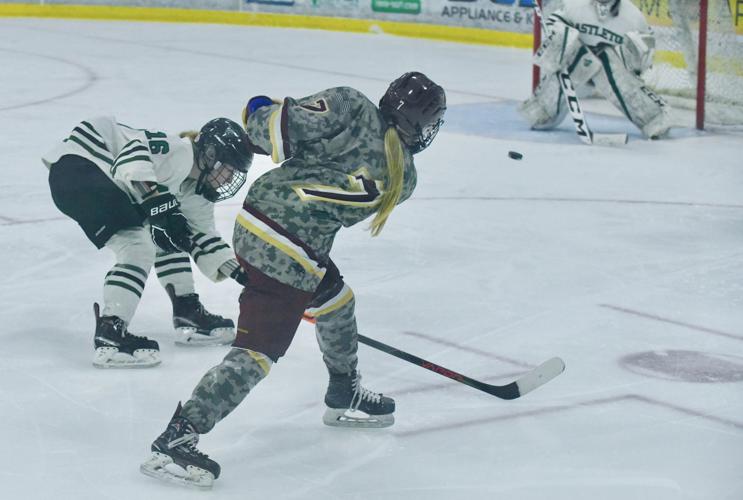 Castleton goalie Kirsten DiCicco (30) makes a save during Castleton’s matchup against Norwich at Spartan Arena in Rutland Town.

The Cadets made things look easy while skating to a 6-0 win over Plymouth State at Hanaway Rink.

Freshman forward Jillian Jackson scored twice as 13 skaters got on the scoresheet for the Cadets, who rolled to their fourth straight victory. Norwich (12-4-0, 10-1-0 NEHC) scored twice in each period as the Cadets swept the season series from the Panthers.

Senior defenseman Morgan Tefft had a goal and an assist as well, while senior goalie Alexa Berg had 12 saves to earn her third straight shutout on the week. Berg improved to 7-4-0 on the year.

Ally LaGue, Ingrid Holstad-Berge and Kenady Nevicosi each scored goals for the Cadets.

It took overtime for the Norwich University women’s hockey team to come out victorious the last time the Cadets went up against in-state rival Castleton.

The Cadets used a dominant first period to blow past the Spartans and sweep the season series.

Norwich put Castleton in a hole before the Spartans even knew what hit them.

Junior forward Ann-Frederique Guay opened the scoring with 16:34 left in the first period on a beautiful shot from the right slot that found the upper right corner of the net. Mikah Baptiste and Taylor Tom assisted on the play.

The key word in McAuliffe’s comment was ‘first goal.’ There would be more.

Just 15 seconds later, Ingrid Holstad-Berge got in on the scoring act, assisted by Baptiste and Guay.

The goals just kept on coming. Guay got a great pass from behind the net and buried a goal for her second of the day, assisted by Baptiste and Holstad-Berge, and she finished the first-period hat trick in a scramble around the goal with seven minutes in the period, with Julia Masotta assisting.

It was Guay’s third multi-goal game this year and first hat trick of the season. Her Friday output pushed her to the team-lead in goals with 10.

“Ann-Fred is a talented player and even better person off the ice,” said third-year Cadets coach Sophie Leclerc. “She makes everyone around her better and she just has that scoring touch. She’s put in the work. We hadn’t seen it yet, but it happened to pay off (Friday).”

Getting that early edge was a big confidence boost for Norwich. No matter the Cadets’ national ranking, it’s always going to be a tough matchup when they take on Castleton.

“The in-state rivalry always just creates this sense of passion that hits right from the start,” Leclerc said. “It’s easy to get up for this game. We talked about that being our bread and butter, starting off with pace and setting the tone.”

Four-goal holes no matter the opponent are tough to climb out of and it’s even harder when you’re playing a team like the Norwich.

The Spartans played much better as the game progressed.

The Cadets tacked on a goal apiece in the second (Aimee Headland assisted by Maddie Moell) and the third (Holstad-Berge assisted by Guay and Baptiste), but Castleton more than hung with its rivals.

“From there, it’s a 2-0 game,” McAuliffe said. “The effort that our group gave despite being down 4-0, and then five and six, they didn’t quit. They played 60 minutes of hard hockey.

“It’s always a battle with us and (Norwich). We love getting up to play them and I know they feel the same.”

Six goals allowed won’t do any favors for Castleton goalie Kirsten DiCicco’s save percentage, but the sophomore kept the Spartans afloat throughout Friday’s game.

DiCicco had 31 saves, including a couple really impressive stops that didn’t allow the lead to balloon even further.

“Any time you go down like that that quick, the wheels start turning of do we make a goalie change here,” McAuliffe said. “She made a glove save right after it’s 4-0 and I’m like, ‘no, she’s back.’ She kept us alive.”

Berg didn’t have the busiest night, but was solid with 17 saves.