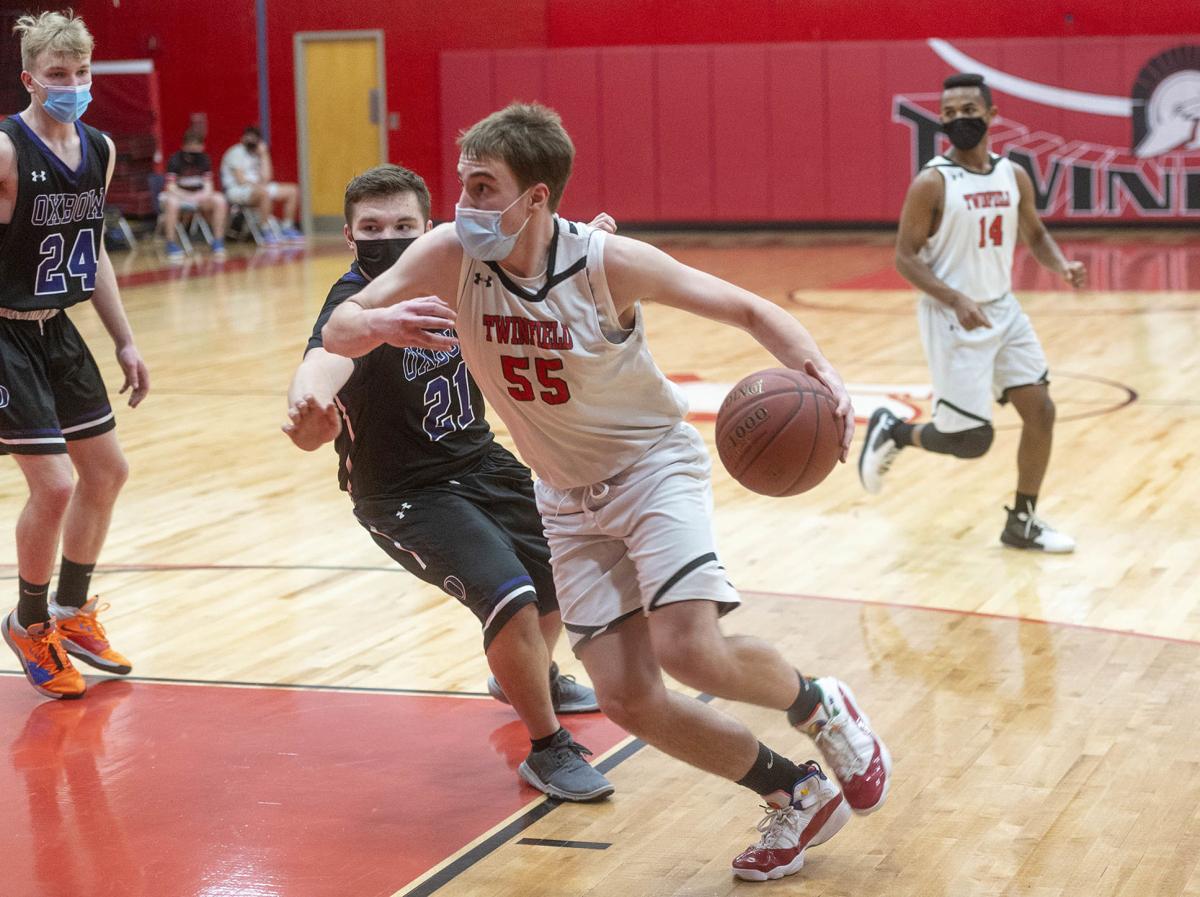 Twinfield senior Cutler Gladding drives past the defense of Oxbow junior Keghan Keyes during the first half of their boys basketball game Tuesday. 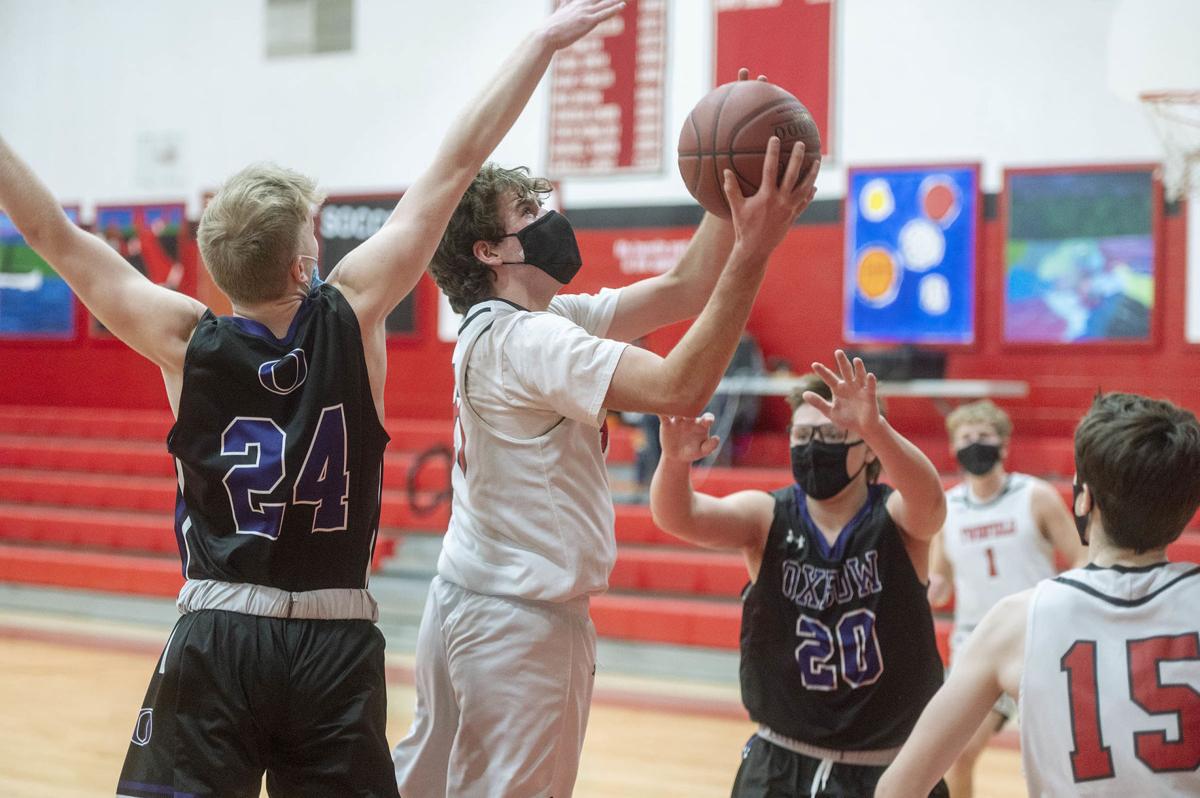 Twinfield senior Gavin Fowler goes to the hoop past the defense of Oxbow freshman Brady Nickles during the first half of their game Tuesday.

Twinfield senior Cutler Gladding drives past the defense of Oxbow junior Keghan Keyes during the first half of their boys basketball game Tuesday.

Twinfield senior Gavin Fowler goes to the hoop past the defense of Oxbow freshman Brady Nickles during the first half of their game Tuesday.

MARSHFIELD — Division IV Twinfield looked as fresh as a daisy in the first half following an 11-day break and survived a third-period letdown to secure Tuesday’s 63-45 victory over Oxbow.

“It was tough for us,” Twinfield coach Chris Hudson said. “We hadn’t played for a week-and-a-half and we were trying to get into a rhythm. We moved the ball really well at times and we played nine guys in the first half. We have six freshmen, but they all can contribute and they all can play. And you put them with the seasoned guys and we’re pretty tough. I like the makeup of the team and I like the way they learn and they listen. And we can shoot the ball well.”

“Kerrick really made the difference tonight,” Twinfield coach Chris Hudson said. “He stepped up and handled the ball really well. He looked to get the ball down to Gavin and Cutler in the paint, and the did.”

Twinfield led 16-6 after the first quarter. A layup in transition made it 26-11, prompting the Olympians to call a timeout. A Trojans putback extended the lead to 35-20 with 35 seconds left in the first half. Twinfield closed out the second quarter with a 3-pointer for a 38-20 advantage. Hudson’s team led 48-32 after three quarters.

“I told them at half that it’s 0-0 and to come out and take care of business and try to put them away,” Hudson said. “For the first six minutes of the third quarter we just kind of stood around and didn’t do anything, which surprised me. But once we got our footing again at the end of the quarter, I felt comfortable that we could hold on and even expand on our lead. I thought our speed and how much we could push the basketball would eventually tire them out — and it did.”

“Meles Gouge and Henry LaRoe made Ilsley work for everything he got,” Hudson said. “All week we were working on trying to keep him in the gaps and keep him contained. He scored 25, but they did a good job keeping him in check. And when I subbed in, he got some points there.”

Twinfield will host Stowe at 6 p.m. Friday. Oxbow will travel to play Richford the same day at 7 p.m.

ST. ALBANS — The Raiders left nothing to doubt Tuesday while defeating the Bobwhites for the third time in four years.

Owen Kellington recorded 18 points, six rebounds and three steals for U-32. Teammate Anthony Engelhard scored 12 points after going 4 of 4 from the field and 4 of 4 from the foul line. Aiden Hawkins contributed nine points, four assists and two steals in the victory.

Elvin Stowell went 6 of 6 from the foul line for the Raiders, who had lots of confidence following Saturday’s 52-35 victory over Lyndon. The Raiders led 9-2 after one quarter, 28-18 after two and 44-28 after three.

“We wanted to carry our momentum from the Lyndon game into this game,” U-32 coach Gauthier said. “And the first quarter was a stark contrast to that. BFA is really big and strong and it was super physical in the first quarter and offense was certainly at a premium. Looking at it from a positive side, I was really pleased with our defense. It took us a little while to figure things out against them and to adjust to their size and their length. And in the third quarter we were able to create some breathing room.”

Colin Jolley scored all eight of his points in the second half for BFA. Teammates Charlie Yates (seven points) and Conor Leach (six points) kept the Bobwhites in contention before the Raiders pulled away steadily. The Division II Raiders rallied to a 46-45 victory over D-I BFA in 2018 and claimed a 44-33 victory over the Bobwhiltes last year.

“Overall, that’s been a competitive matchup for us,” Gauthier said. “They’re always a big, strong and physical team. And that was really good for us to go against at this point in the season. This season the teams we’ve faced so far haven’t been at that level of physicality. And that’s the type of environment that will hopefully prepare us for the playoffs. I was tremendously proud of our team’s grit tonight when it felt like things weren’t going our way for quite awhile. And slowly but surely, possession by possession, things fell into place, shots started to fall and we made our free throws. And we competed well on the boards despite being tremendously outsized.”

U-32 made eight 3-pointers, while BFA hit a trio of shots from long range. The Raiders were 19 of 28 from the foul line. Noah McLane contributed seven points and eight rebounds for U-32.

“Noah did a great job playing our big man spot,” Gauthier said. “He was undersized tonight, but the way he competes and defends and his work on the boards was a real spark for us.”

U-32 will host Montpelier at 6 p.m. Friday. BFA-St. Albans will travel to play Missisquoi at 7 p.m. Monday.

BARRE — The Cougars went 5 of 6 from the foul line at the end to lock up Tuesday’s victory.

Spaulding was 10 of 14 from the foul line and hit four 3-pointers. The Cougars were 8 of 11 from the stripe and made a trio of 3-pointers.

Spaulding’s Cooper Diego went 2 of 2 at the foul line during the final seconds of the second quarter, slicing Mount Mansfield’s lead to 21-17. Mount Mansfield led 30-29 after three quarters. The Cougars scored four quick points at the start of the fourth quarter, making it 34-29.

“We did a good job on the boards, but they just hit some timely shots,” Spaulding coach Jesse Willard said. “The story of the season so far is we are really struggling in the paint. We’re a young team and we’re trying to figure things out. As the season progresses, I think a lot of shots will start dropping for us.”

“Coaching the game tonight, I think we’re still trying to find our identity,” Willard said. “Tonight felt like some of the things that we’ve been working on are starting to translate into the games. The first two games we were just trying to play. And tonight we played with a better sense of purpose. We were much more precise with our passing and our movement. And I think it showed when we came out of the gate and started out with a 6-0 run. But we go through these lulls where we struggle to put the ball in the basket. I truly believe we can play with these teams. We certainly had our hands full tonight. We’ve found that it’s the four-minute stretch here, three minutes there that hurts us. When we lose our focus and play without purpose, we give those teams an opportunity to pull away.”

THETFORD — Sophomore Ronnie Riby-Williams scored a career-high 17 points Tuesday as the undefeated Solons made quick work of the the Panthers.

“Ronnie is really buying into his role,” Montpelier coach Nick Foster said. “He’s going to bring a ton of energy off the bench, he’s going to fly around and he’s going to play defense first. And he was 5 of 7 from the free-throw line tonight.”

The Solons led 24-8 after the first quarter. A 38-20 halftime advantage turned into a 59-25 lead after three quarters.

“Both of our guards have been dynamite for us and the way they play defense in just incredible,” Foster said. “They’re fearless, they have great balance and great instincts, and they move their feet well.”

“We shared the ball really well,” Foster said. “We got a lot of baskets in transition out of some defensive rebounds and some turnovers. It’s nice to see them be so unselfish and make the extra pass and put the team first.”

“Dan (Gauthier) is always really good and they get even better the second time around,” Foster said. “They’re a tough matchup with their personnell and their coaching and that’s going to be a tough one for us. But we’re excited for it.”

Danville ended the first half with a 10-0 run to seize control for good.

“Brigham had 11 points in the first half and we did a better job on him in the second half,” Marauders coach Craig Tassie said. “But they hit shots and we did not.”

A 3-pointer by Isaiah Baker gave the Wildcats an early 7-3 lead. The Wildcats led 16-10 after the first quarter and were in front 33-26 after two periods. Levi West registered 22 points in the loss.

“They have all that size and they have good, athletic guards,” Hazen coach Aaron Hill said of the Ghosts. “That was a grind of a game and it was a good matchup for us. Randolph will be a dangerous team later in the season. That size and that guard play is going to make them a very tough out in the playoffs.”