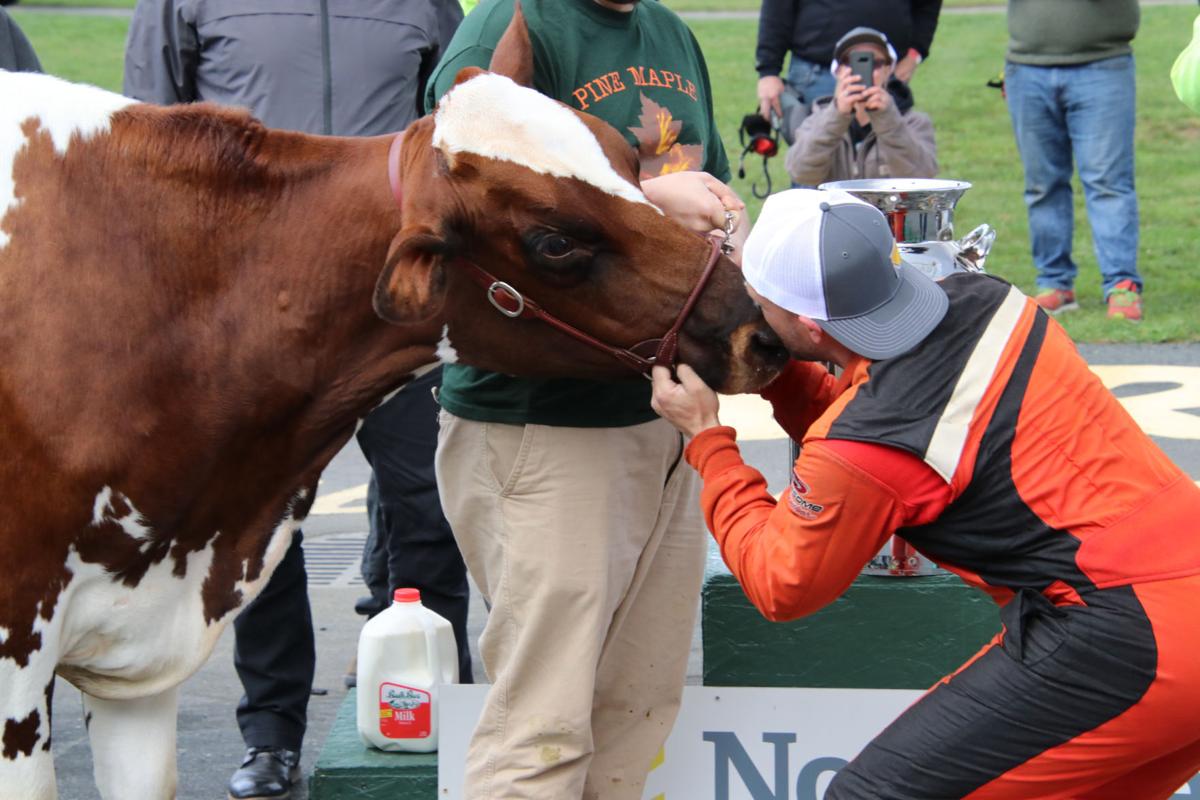 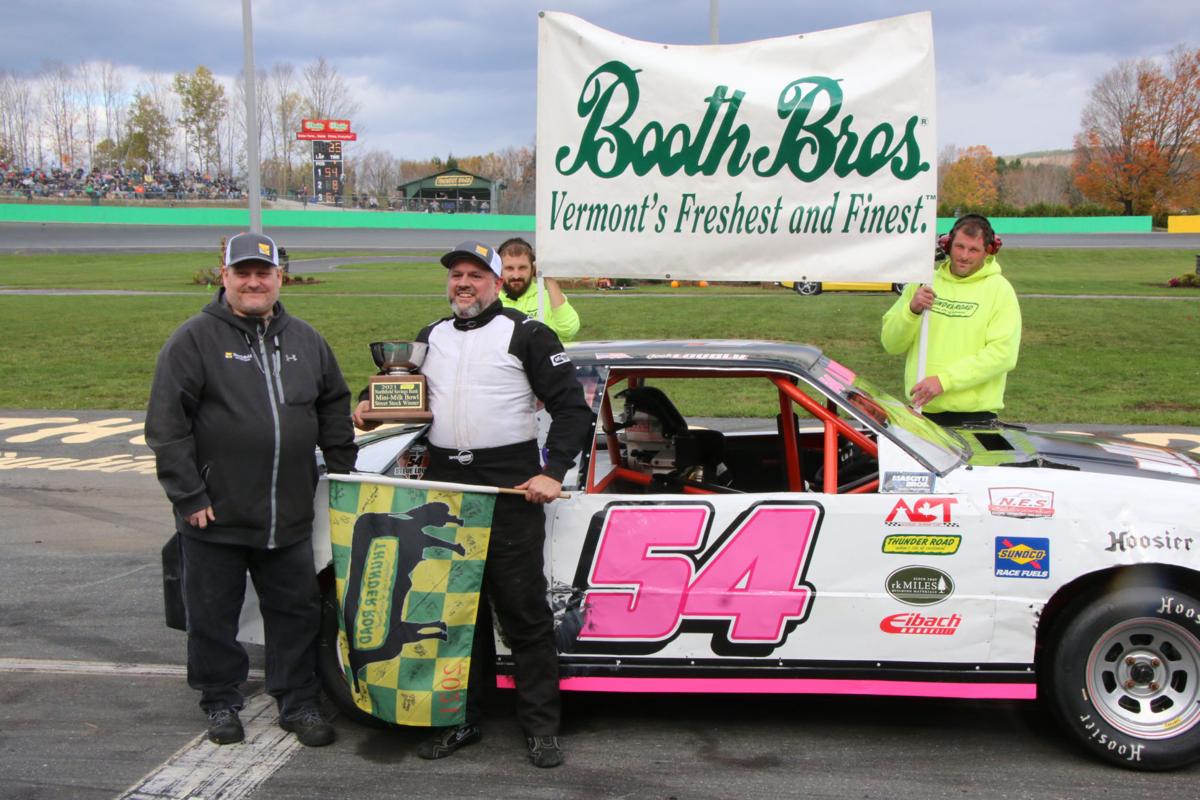 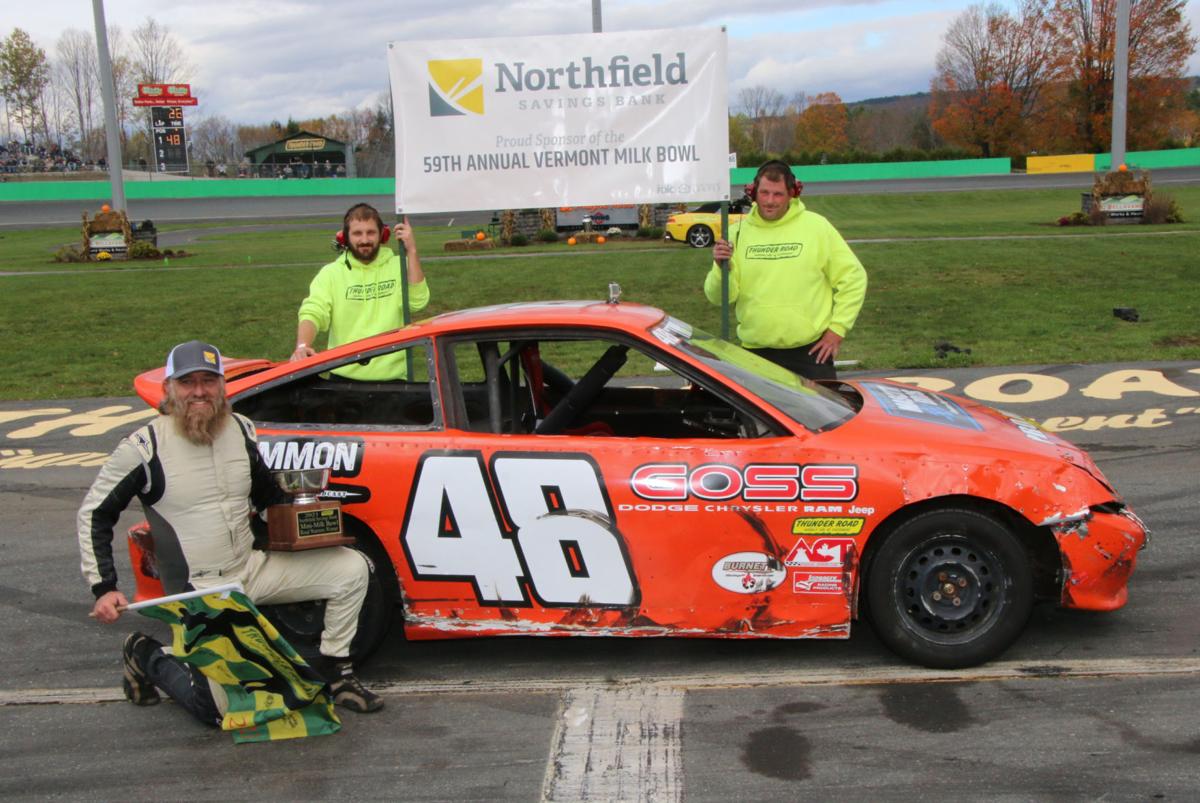 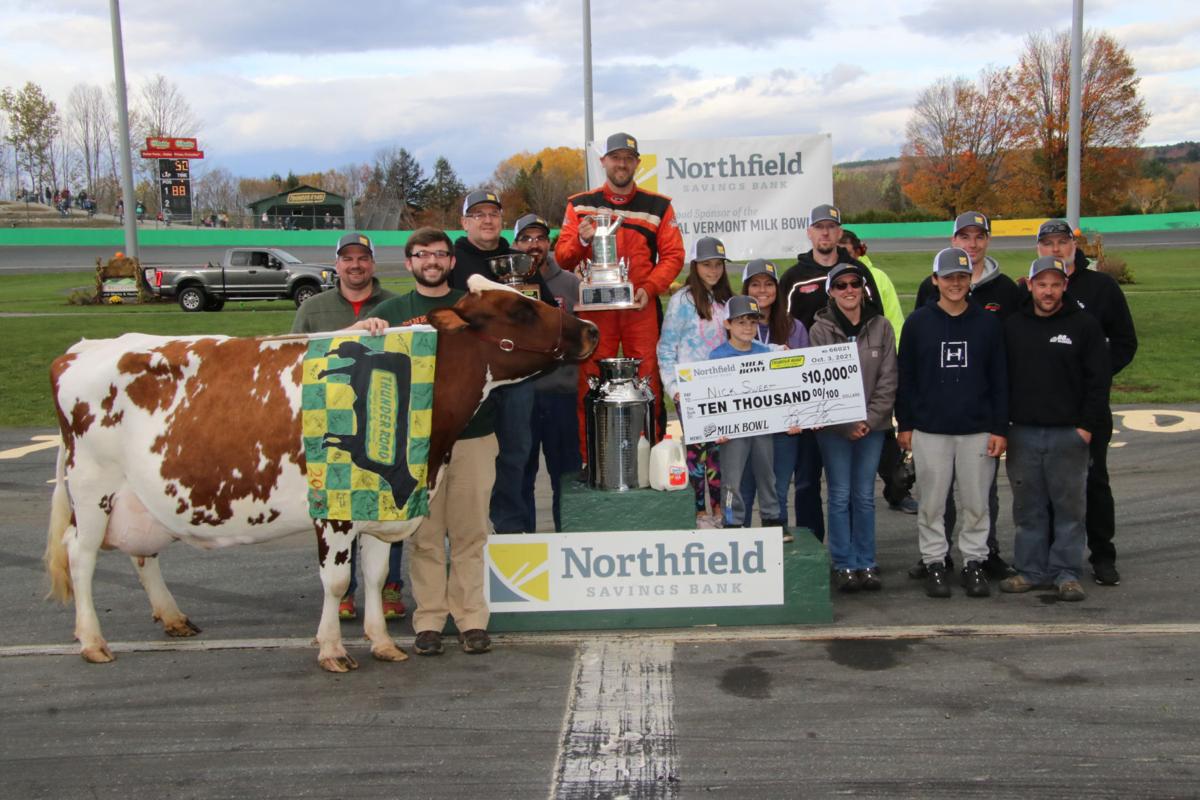 Barre’s Nick Sweet stands atop of the podium while celebrating his fourth Vermont Milk Bowl victory with his team and representatives of Northfield Savings Bank and Harvest Hill Farm. 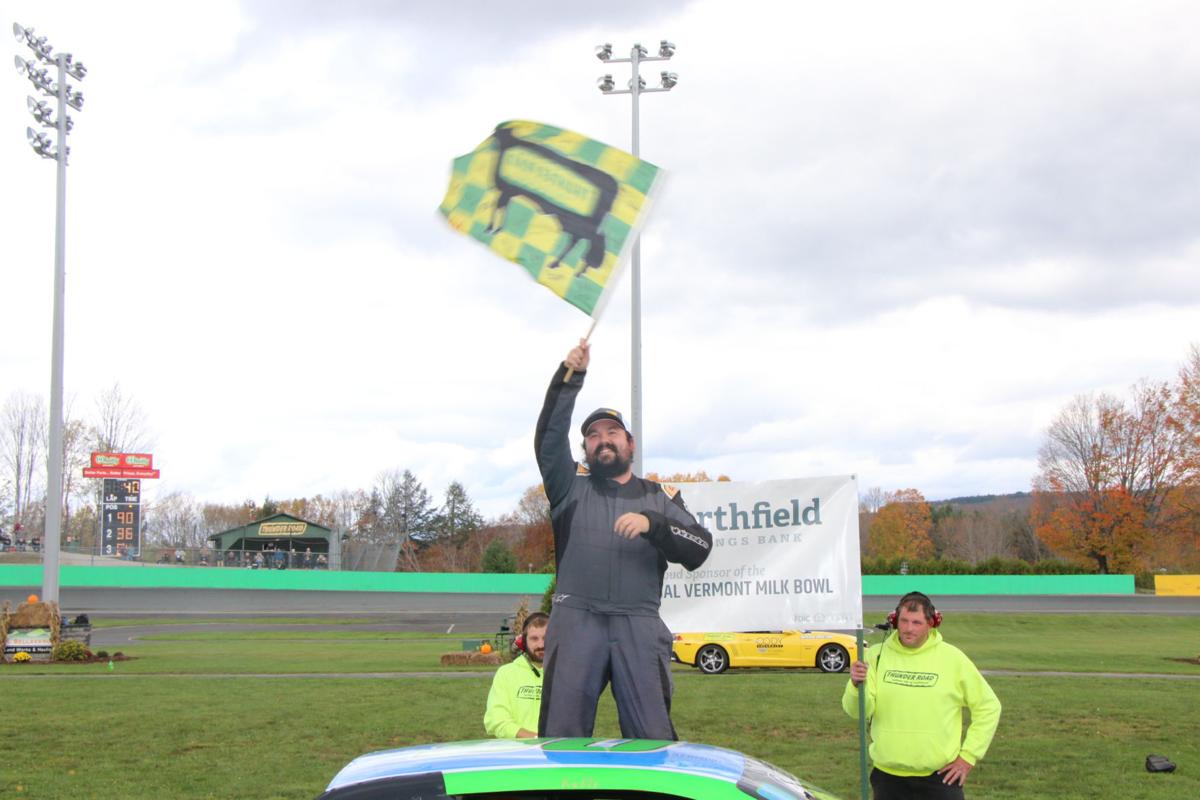 Barre’s Nick Sweet stands atop of the podium while celebrating his fourth Vermont Milk Bowl victory with his team and representatives of Northfield Savings Bank and Harvest Hill Farm.

After setting a track record during Saturday qualifying, Sweet won the first 50-lap segment and fought the rest of the way to his 23rd career Maplewood/Irving Oil Late Model victory and 12th ACT-sanctioned Late Model triumph.

Sweet originally did not enter the 59th Vermont Milk Bowl until the week before the event. He sped to victory in front of a big crowd to equal the feat of New England Auto Racing Hall of Famer Robbie Crouch. The Barre driver’s engine expired at the finish and had a puddle of oil underneath it following Victory Lane ceremonies. Following tradition, Sweet celebrated the first-place finish with an enthusiastic kiss of the Vermont dairy cow beauty queen.

Sweet faced a tall task from the beginning while competing against a stout field. Although Sweet earned a wire-to-wire victory in the first segment, he was constantly followed by Jason Corliss. The reigning track champion Corliss made a big move to challenge Sweet with 15 laps remaining, but Sweet used a lapped car to his advantage to hold on against his rival. He then darted away in a six-lap sprint to the finish following Marcel J. Gravel’s spin.

The top Segment 1 finishers started from the rear in Segment 2. Things opened up when Trampas Demers and Eric Chase got hooked while battling for third just past the halfway point. As Matthew Smith ran away to win the segment, Sweet, Derek O’Donnell and Joey Polewarczyk forged their way forward. Sweet took third for the segment in the tire tracks of Polewarczyk, with O’Donnell right behind. That gave Sweet a four-point edge over O’Donnell and Corliss entering the final 50-lap segment, while Polewarczyk sat fourth with 10 points.

The top-three spent the first half of the segment boxed in traffic, with O’Donnell even pitting during a lap-16 caution in an attempt to solve handling woes. That gave Polewarczyk a chance to make a move. And when Brendan Moodie looped it in turn four to bring out a caution with 23 laps remaining, “Joey Pole” was up to fifth. Corliss sat eighth and Sweet was ninth, setting up a showdown to the finish. A lap after the restart, Sweet made the winning move. Corliss attempted to go around the outside of Eric Chase for seventh on the backstretch. But Sweet dove under both of them while entering turn three, gaining two spots to establish a cushion over the competition.

Polewarczyk tried to keep pace by going to the high line, but could not find the grip he needed and slid back in the closing stages. Sweet settled into the fifth spot and was coasting to the victory before his car started losing power on the final lap. Knowing how close he was to a Milk Bowl trophy, Sweet kept his foot in the gas. After taking the checkered flag, he watched smoke billow from the engine after pulling into Victory Lane.

Sweet’s finishes of first, third and fifth gave him nine total points. It was the fourth straight year a single-digit score was the winning tally. Corliss, who was also pursuing a fourth Milk Bowl victory, ended up second with a score of 15 points. His segment scores were two, six and seven.

Barre’s Cameron Ouellette was the overall winner of a wide-open Lenny’s Shoe & Apparel Flying Tiger Mini Milk Bowl. Ouellette finished third in Saturday’s first 40-lap segment behind Sam Caron and Logan Powers, which put all three at the tail of the field to start Sunday’s stanza.

Ouellette, Caron, Powers and the rest of Saturday’s top 10 struggled mightily to break through the herd toward the front of the pack. With only a single caution, which came on lap 16 for Kaiden Fisher’s turn-two spin, opportunities were few and far between. That gave roughly 15 drivers a legitimate chance at the overall win as the laps wound down. With 10 laps left to go, Jason Pelkey, Joel Hodgdon and Ouellette were able to put a train together on the outside. They rolled up to the 10th, 11th and 12th positions in Segment 2 by the time checkered flag flew. After officials stopped the field on the front-stretch to tally up the points, Ouellette was declared the Mini Milk Bowl winner with a score of 15 points. It was Ouellette’s second win of the year and seventh of his career.

Williamstown’s Josh Lovely won the second segment and the overall of the RK Miles Street Stock Mini Milk Bowl. Lovely finished fourth in Saturday’s 25-lap segment and saw one of his rivals exit the race early on Sunday when Dean Switser Jr.’s car shut down. From there, Lovely waited out some first-half traffic before building some distance over Jeffrey Martin and Segment-1 winner Tommy Smith.

A spin by Smith on lap-18 moved Lovely closer to the victory. With three laps to go, Taylor Hoar and Gary Mullen made contact on the front-stretch while fighting for third. Hoar slid through the infield and was nailed by Smith when she came back on the track in turn one. Both drivers walked away from the hard impact.

That moved Lovely up to fourth for the three-lap dash to the checkered flag. Michael Gay got the jump off the outside over Will Hennequin as Lovely followed him to third. Coming into turn three of the final time, Gay and Hennequin made contact. That crossed up Gay, and Lovely shot around both of them to win all the marbles with five total points.

Barre’s Martin (3, 8) took second, with his teammate Kyler Davis (5, 10) placing third. Gay managed to hang on for third in the second segment, which gave him fourth overall in a tiebreaker over Haidyn Pearce. Jesse Laquerre, Justin Blakely, James Dopp, Hennequin and Smith rounded out the top-10.

As Mark Beaulieu and Matt Ballard competed for the segment win, the quartet behind them went at it for the overall victory. Following a mid-race restart, Maynard got around Sayers on the outside to take over the fifth position. When another caution flew with seven laps to go, Maynard cut under Fleury. And Maynard’s fourth-place segment finish gave him a winning score of six points.