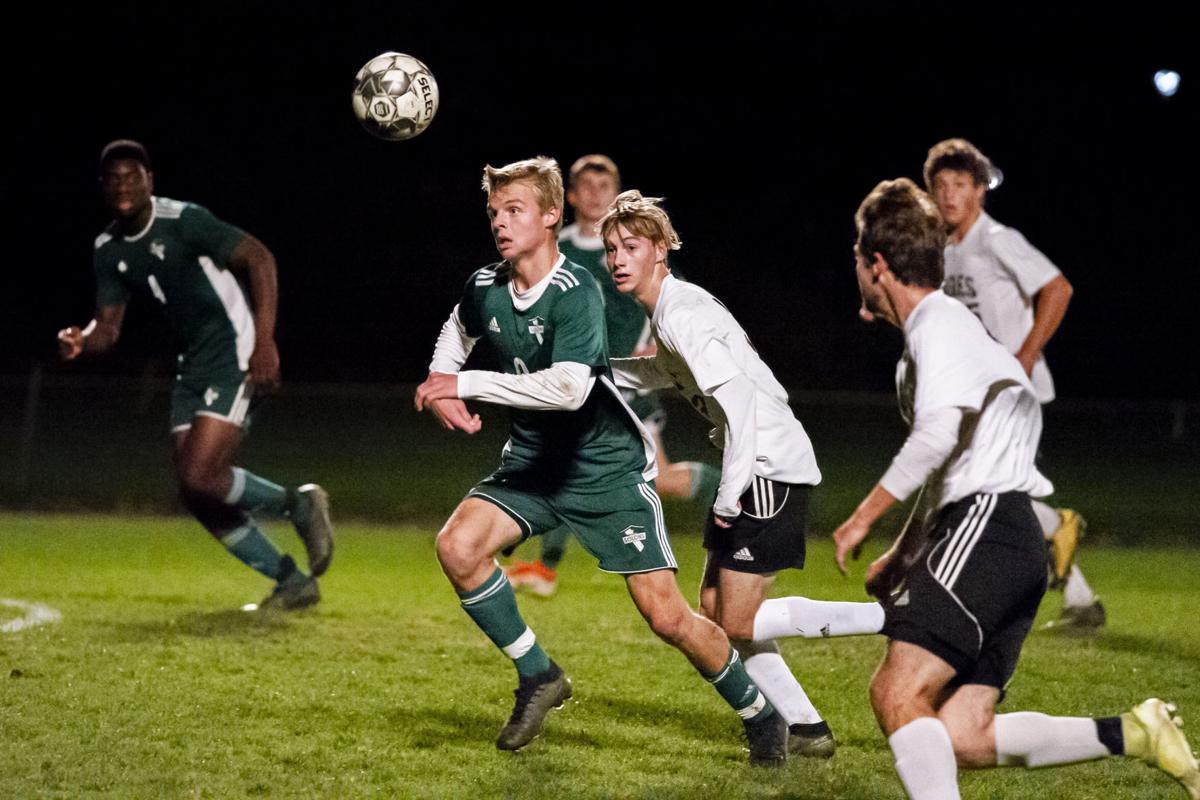 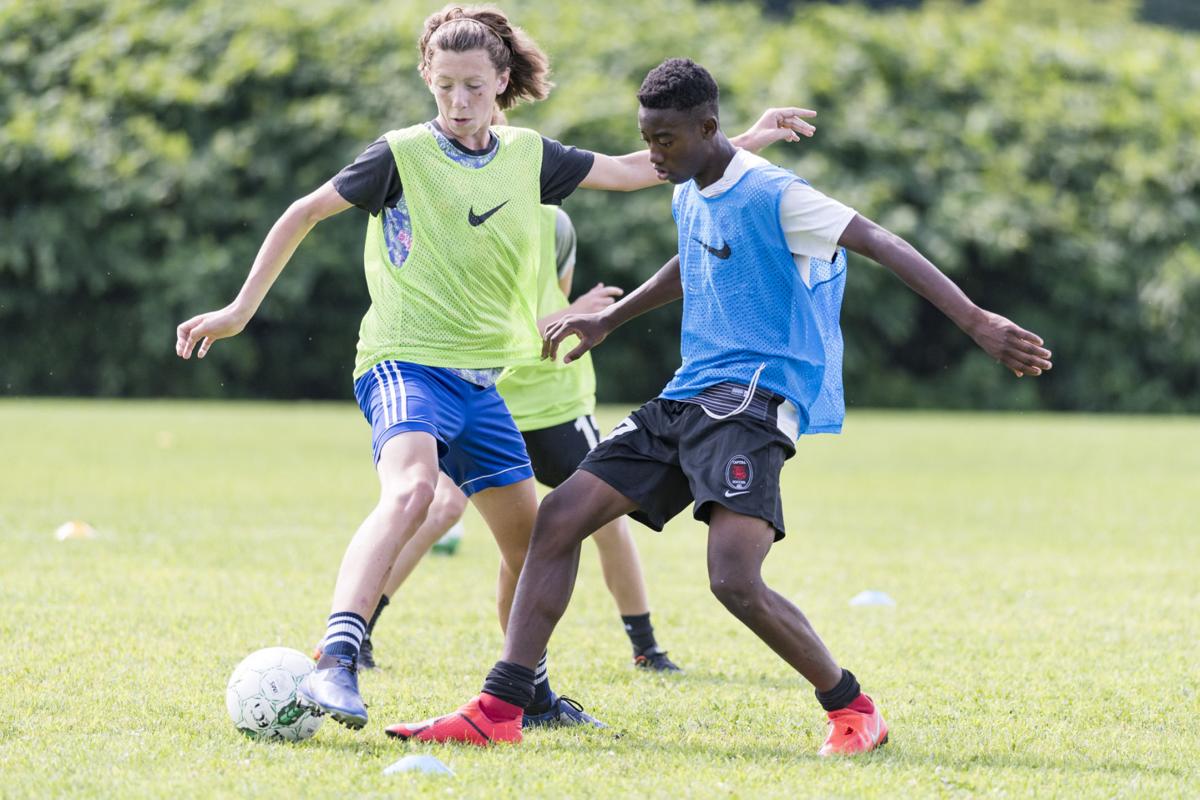 MONTPELIER — Coach Eric Bagley and the Montpelier boys soccer team are prepared to be road warriors this season as they seek the program’s first title since 1996.

Seven away matches and three home games in a one-month span will keep the Solons busy all fall. Bagley and his players are counting down to Wednesday’s opener with bated breath, and it’s no surprise that the Solons are eyeing big things for 2020.

The roster is stacked with 15 returning players, including six members of the senior group and four of the juniors. All five freshmen from last year’s varsity squad are also back on the roster.

The Solons’ 2019 back line was one of the stingiest in Vermont, and all four starting fullbacks are in the mix again this season. Montpelier’s seniors have yet to win a playoff game, so they know it’s now or never. Despite a successful 9-5-1 campaign last year, the Capital City squad was left wanting more after suffering a 2-0 playdown loss against Mount Abraham.

Sometimes a radical change is needed to make improvements, but Bagley isn’t going to tinker with too much of his lineup. He liked what he saw for most of last season and doesn’t want to impede progress.

A switch in formation could be one of the biggest differences this fall, with the Solons potentially adding a third striker while playing a 4-3-3. That could help solve some scoring issues while also giving a few younger strikers a chance to prove themselves.

Weinstein is the go-to goalie after splitting time last season. Leo Riby-Williams and Bruzzese are starting central defenders and will be flanked by Shea and Ricker. Collier will direct the flow as a center midfielder, while Hughes, Duprey and Noah Samuelsen will rotate between the other midfield positions.

Ronnie Riby-Williams, Mills and Fellahi are three proven strikers. Thomas, Cody and Duggan are also likely to see lots of time up front. Fuller and Harris add much-needed depth on defense as the Solons prepare to start the season with three straight road games.

Montpelier will visit North Country on Sept. 24 before traveling to play eight-time defending champ Stowe on Sept. 30. The Raiders won seven straight titles in Division III before bumping up to D-II last season.

Lyndon will host an Oct. 6 match against Montpelier, which will play its home opener Oct. 10 against Northfield-Williamstown. Two days later MHS will host the Green Mountain Valley School. A highly anticipated trip to St. Johnsbury is slated for Oct. 14, though details are still being finalized.

There will be no rest for MHS during the final two weeks before playoffs. A match at Harwood on Oct. 15 will lead up to the final home game of the regular season: an Oct. 17 showdown versus Peoples Academy. Montpelier will attempt to improve its seeding for the post-season with games at Randolph on Oct. 20 and at U-32 on Oct. 24. Bagley looks forward to ending the regular season against the Raiders, who eliminated the Solons during playoff action in 2005, 2006, 2011, 2013 and 2018.

Here are 10 questions for the MHS coach with six days left before the opening match.

TA: How is everything going with the guys playing in masks and following the COVID guidelines? I know everyone playing soccer in Vermont is in a pretty similar boat right now.

Bagley: “It’s obviously different. But a lot of the guys on the team play club soccer. So they’ve been used to all the health checks and the social distancing at games. The new thing is the masks, which they’ve been great about. There have been no complaints about them. The guys are just trying to find one that works best for them.”

TA: Did it seem like the guys were prepared? I know they’ve been working a lot during the summer, either in little pods or in bigger groups at times.

Bagley: “We weren’t able to do anything team-wise until the VPA sent out their guidelines, which was around three weeks before the start of the season. I know that the kids got together on their own a little bit. But once we were given the go-head, we obviously got together. The guys were pretty excited to get going and start training as a team.”

TA: What would you say about having 15 players returning? Most coaches aren’t going to lose sleep over that kind of figure. And with those 15, a lot of them have played together since kindergarten or first grade.

Bagley: “Yeah, a lot of those guys have played together for years. There’s a big senior class and those guys are really tight. They play soccer together, a lot of them play basketball together. They’re just really good friends that have been together forever.”

TA: Having seven seniors isn’t breaking any records. But at the end of the day, between quantity and quality, aren’t you’re pretty psyched to have a seven-player senior crew like that?

Bagley: “Yeah, it’s a really good class. They’re really athletic and they’re really talented. If you look at the list of seniors, for Bobby, Leo and Tyler, their last sporting event was a state championship game in basketball. So they’re obviously really great athletes. They like to compete and they’ve been successful. So it’s definitely a big advantage for me and for the team.”

TA: Because you’ve got so many returning starters, did it feel like some guys were locked in to what their position was last year? Or was it more open-ended?

Bagley: “I think our back four is pretty set. We only gave up eight or nine goals last year. Between Leo and Will and Brecken and Tyler, those four will be mainstays in the back line. And Max will be the guy in goal for the season. That’s a pretty strong back five right there. So their positions were pretty well set. One things is we may see different formations this year. Since all of these guys are really smart athletes and good soccer players, they have the ability to play in multiple positions — which gives us a lot of flexibility. The guys in the midfield, between their different roles, we can see them moving around. And whether we play three up top or two up top, we have the players to do that as well.”

TA: I know Leo is usually in the mix in the penalty box on offensive restarts and corners. And I’m guessing that your wing fullbacks are going to get forward too, right?

Bagley: “Brecken is a player from the back who loves to get forward as much as he possibly can. He’s been just about begging me to play as a forward lately, so he loves to attack. And doing that from a fullback position is such an advantage for us.”

TA: Can you say a quick thing about a few of the strikers and what they bring to the table?

Bagley: “They all bring different attributes to the table. Ronnie is very skilled, very fast and he does a good job of coming back and getting the ball. Sina is always looking to get forward and looking to get balls in behind the defense. And he’s looked really good this fall so far. Quinn, two years ago he had a great year and had around 10 goals. Last year he didn’t score as many, but I’m really expecting him to get back to scoring the way he did two years ago. And if we end up changing our formation, he’ll get a lot more chances to score goals as well.”

TA: A lot of coaches have maybe one or two kids who can reliably put the ball in the back of the net. But do you feel lucky having so many forwards? Especially with masks, guys can get a little break and it’s not like the talent level drops much when you get the subs in.

Bagley: “For the front line, we basically have two lines. I could run out one group and they could go really hard. And then I’d put the next group in and there’s really no drop-off. It would be different because they’re different players — and they have different attributes as players. But the quality would still be there. I don’t know if we’ll have one guy do the majority of scoring. Out of the six guys up front, they should score some goals. And I’m going to look for Ben Collier to score some goals this year. And I’m hoping that other midfielders as well will be able to chip in. I’m hoping that we’ll be dangerous in more than one area of the field, so other teams can’t key in on that one player.”

TA: Your personnel is mostly the same this year, but do think your style will change at all? Would you want to push the tempo more or high press a little more?

Bagley: “I don’t think our style will change. I think the way that we played last year, where we try to control the ball, suits us. Not a lot of high school teams play out of the back. A lot of times, on goal kicks when the goalie gets the ball, they tend to punt it up or kick long balls. So there’s not a lot of opportunities to press in high school soccer. So our challenge this year is to be really challenging for those long balls. When the opposing goalkeeper does hit them long, we need to do a better job dealing with those this year. And if we do that, we’ll be able to have more sustained pressure in the attacking half. And that will lead to more chances, which should lead to more goals.”

TA: It’s been since 1996 since Montpelier boys soccer won it all. Especially with the basketball guys getting so close last winter, does it seem like the hunger and confidence is there to win a championship?

Bagley: “The basketball guys made it all the way to the finals and got really unlucky in that game. As athletes and as competitors, they’re going to want to go as far as they possibly can. I’ve been fortunate as a coach at Montpelier that I’ve had a lot of really successful teams. When I was coaching the girls, we made a habit of making it at a minimum to the semifinals. I feel like last year was a turning point in the mentality of the boys program and how we played and the expectations. And I’m hoping that this year we can take it that one step further and really cement our place as one of the top teams in the state.”