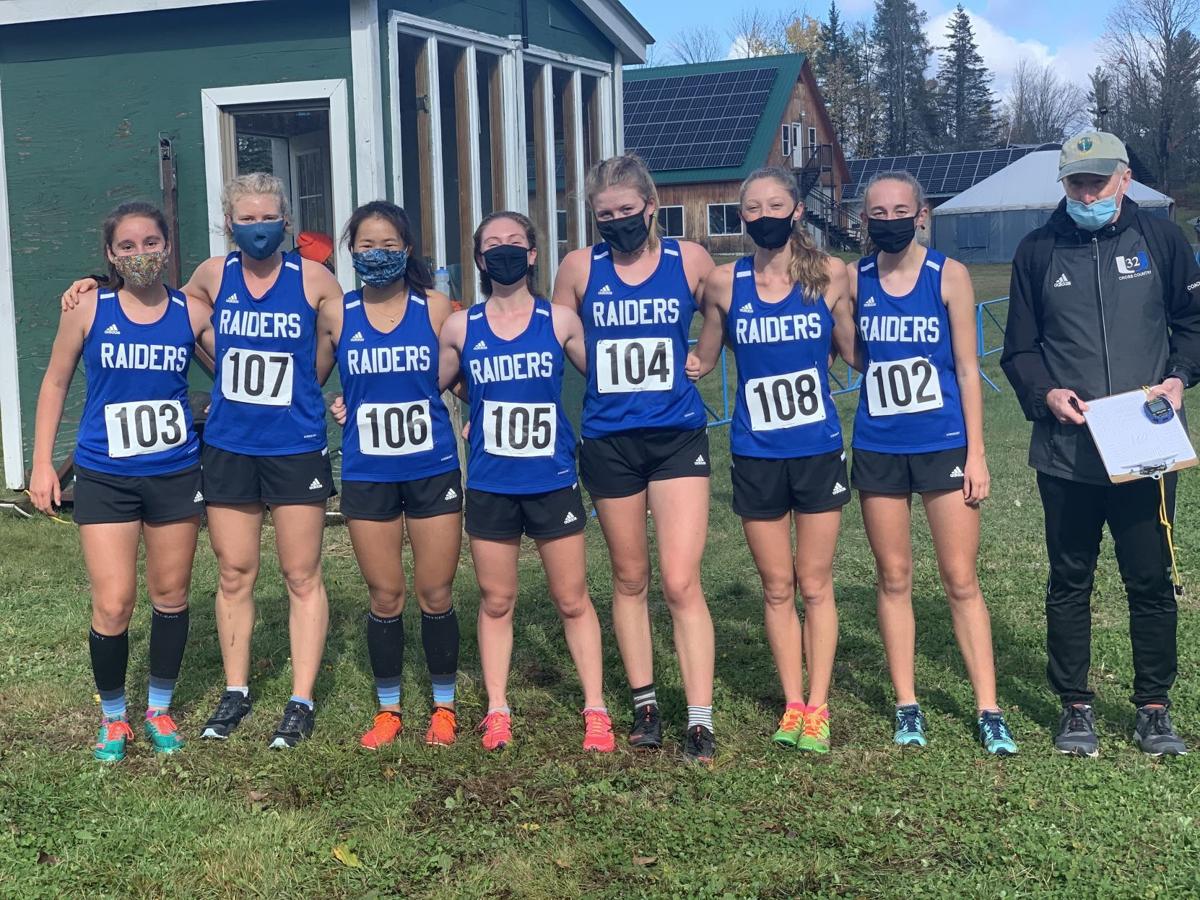 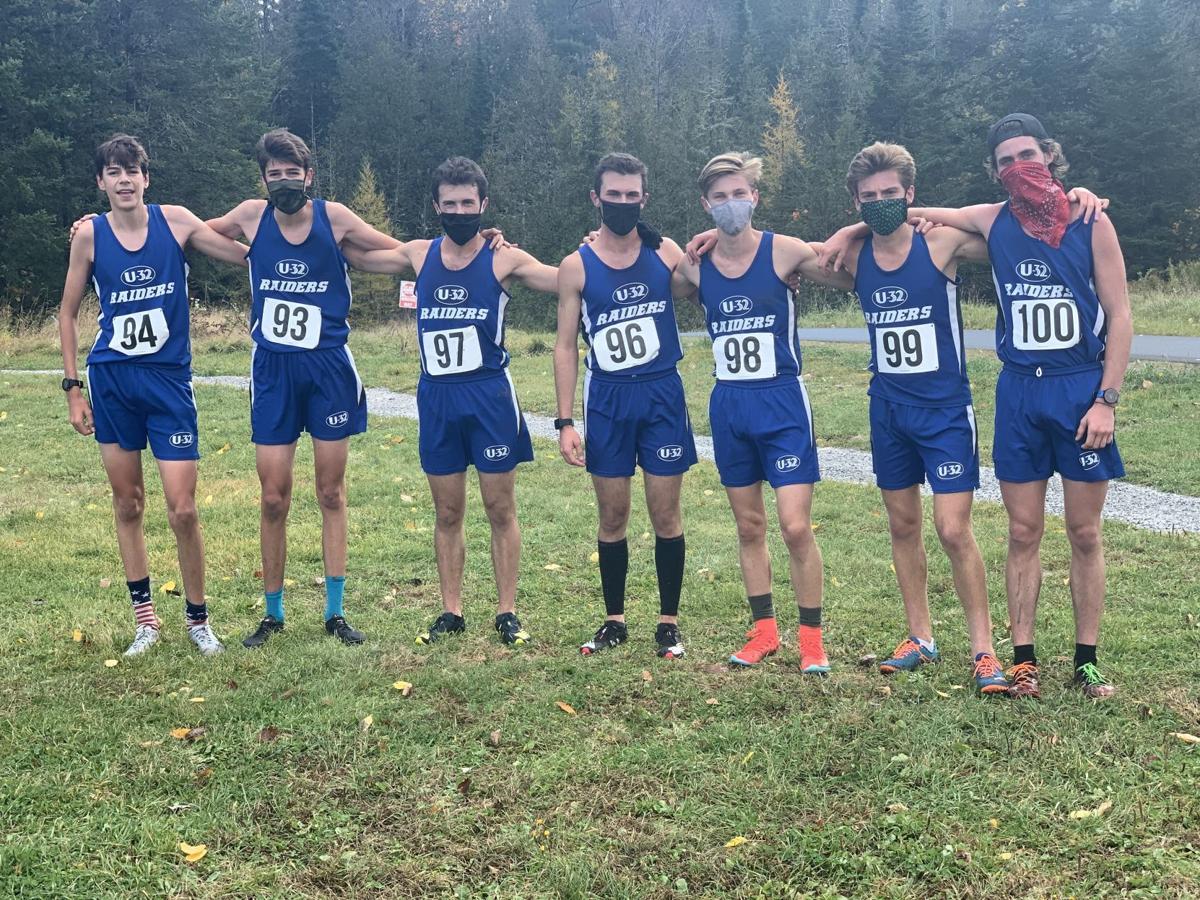 Members of the U-32 boys cross-country team pose after completing the 5-kilometer course at NVAC Mountain Division Championships. 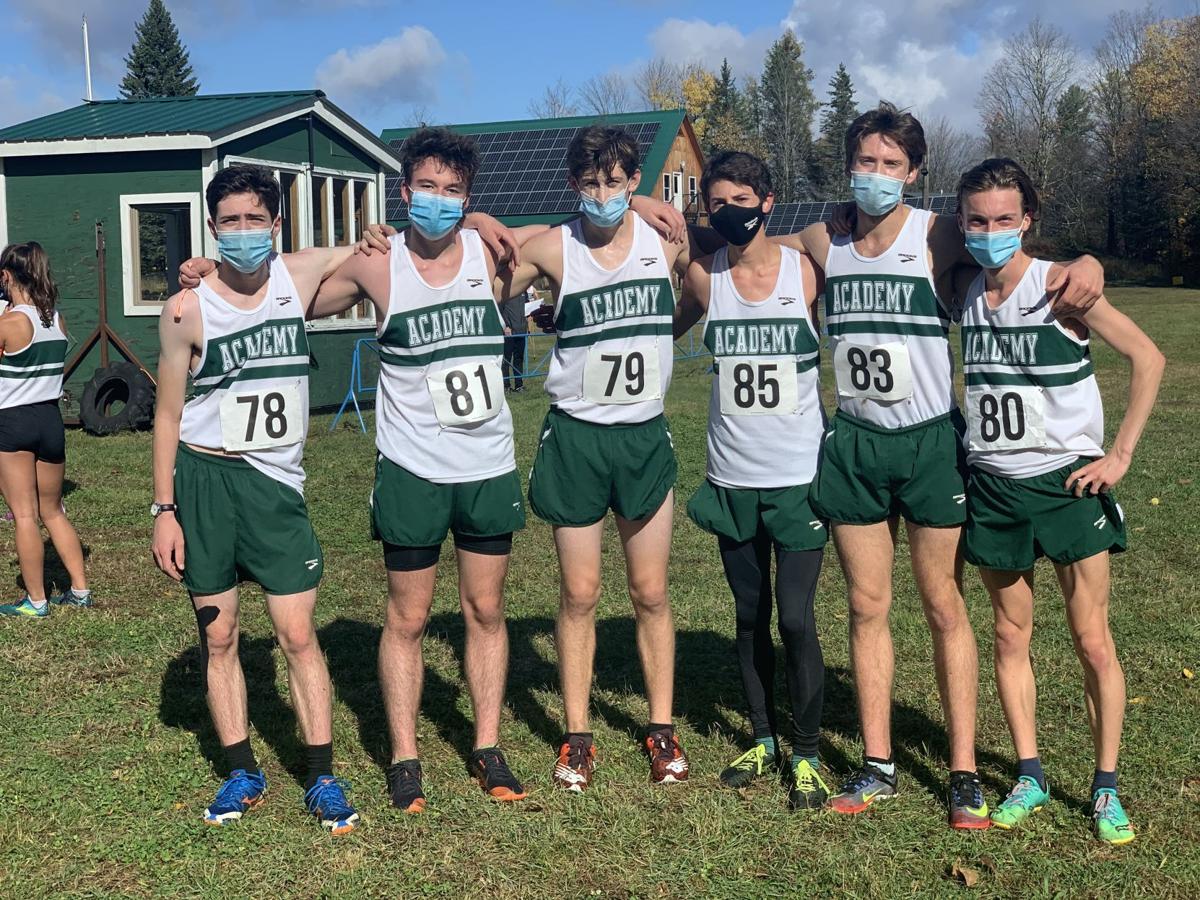 Members of the first-place St. Johnsbury boys cross-country team gather near the finish line after fending off second-place U-32 during Saturday’s NVAC Mountain Division Championships.

Members of the U-32 boys cross-country team pose after completing the 5-kilometer course at NVAC Mountain Division Championships.

Members of the first-place St. Johnsbury boys cross-country team gather near the finish line after fending off second-place U-32 during Saturday’s NVAC Mountain Division Championships.

CRAFTSBURY — Cross-country runners Aine Fannon and Hale Boyden reminded U-32 that it’s not where you’re from, it’s where you’re at.

The transfer students helped St. Johnsbury earn a clean sweep Saturday, while the Raiders settled for a close second at NVAC Mountain Division Championships. Every school had unique start times to maximize social distancing, with up to seven boys and seven girls racing together as a team.

Fannon is a Calais native who competed for the Raiders as a freshman before switching to St. J the following year. The senior placed fourth for her team and 12th overall, lifting the Hilltoppers to a one-point victory in the girls competition. U-32 would have won a tie-breaker, but Fannon’s 5-kilometer time of 22 minutes, 53 seconds prevented that scenario.

“May has been our top runner any time we’ve run an actual race,” U-32 coach Mark Chaplin said. “After that, it’s been different every time.”

“May and Jane and Shams are our speed people,” Chaplin said. “Those are the runner I wouldn’t want to be caught in a sprint with. And our strongest hill runners seem to be May, Amy and Ayla (Bodach-Turner). Amy’s strength is endurance. She’s the Energizer Bunny that just goes on and on. So a long hill at the end plays to her strength. And before today, the best that Addy had finished was sixth on the team. She was our fourth runner today, so she’s moved up into the scoring five.”

Lana Page (11th, 22:45.7) and Isabelle Serrano (14th, 23:04.4) were also in sharp late-season form. The Raiders held a run-off Tuesday to determine who would compete at the district championships. Serrano edged Bodach-Tunner for the final spot.

“Our girls ran very well compared to Camille and Maggie, who crushed them three days ago,” Chaplin said. “But, on the other hand, St. J ran even better. We edged them in a head-to-head format. In a separate time trial, they edged us. But it’s so artificial because you’re running in a vacuum and there’s nobody to compete against. So we’ll see how it goes. And the truth is that we have to beat (St. Johnsbury) in the league, but we don’t have to beat them in the state. They’re a bigger school than we are.”

Boyden is a Duxbury athlete who was a standout at Harwood in 2018. The junior transferred to St. Johnsbury last year, joining forces with Evan Thornton-Sherman to form a lethal 1-2 punch. Thornton-Sherman showed no signs of fatigue while winning Saturday’s race in 17:00.7. Boyden (17:40.4) used a strong push at the end to claim second over Craftsbury’s Cormac Leahy (third, 17:43.6). The hustle at the line helped St. Johnsbury secure a six-point victory over U-32.

“Six points is not much in cross-country in a big race,” U-32 boys coach Andrew Tripp said. “If we passed one of their guys, it can be a four-point swing. It’s been awhile since districts has been a really tight battle. It was just super close with really good racing. And it’s a hard course — I think it’s pretty similar to Thetford time-wise. Last week we beat St. J by a handful of points. And this week they beat us by a handful of points.”

“Slightly smaller runners tend to go up hills better,” Tripp said. “Evan and Hale and Braden and Gabriel don’t weigh 600 points between the four of them — probably closer to 500. They are light guys and they go uphill well. We had six guys inside of 30 seconds and that’s pretty great running. Hats off to St. J. Two really good teams raced and they beat us. They have an advantage: The bigger the race, they’re going to be harder for us to beat. We don’t have that low stick. They have two next-level guys who are overall threats at New England’s. There’s no New England’s this year — but Braden and Gabriel would also be in the hunt for top 10.”

“No 2-5, we’re very even with St. Johnsbury,” Tripp said. “With Evan off the front, any particular week it’s just going to come down to, ‘Are we 10-15 seconds faster on that day?’ And if so, we can probably win. And if they are, then they’ll probably get us. This was a challenging format today because of its novelty. But everybody had to run under the same format. And it’s a good challenge because it forces people to race with very few external variables. There’s no other teams to chase. There’s not the adrenaline of a crowd or competitors. It’s not what we’re used to. But it makes everyone stronger as racers.”

U-32 will return to action Tuesday at Oxbow.

“Unlike most schools, we’re still in an every-other-week format,” Chaplin said. “So next week all I see is my ninth- and 10th-graders at practice. Everybody comes to races, so my only chance to have a workout for the whole team is to take them to Oxbow and do a tempo run. It’s not entirely a level playing field because I know there are other schools that don’t have that kind of restriction. They get to practice with their whole team every day.”