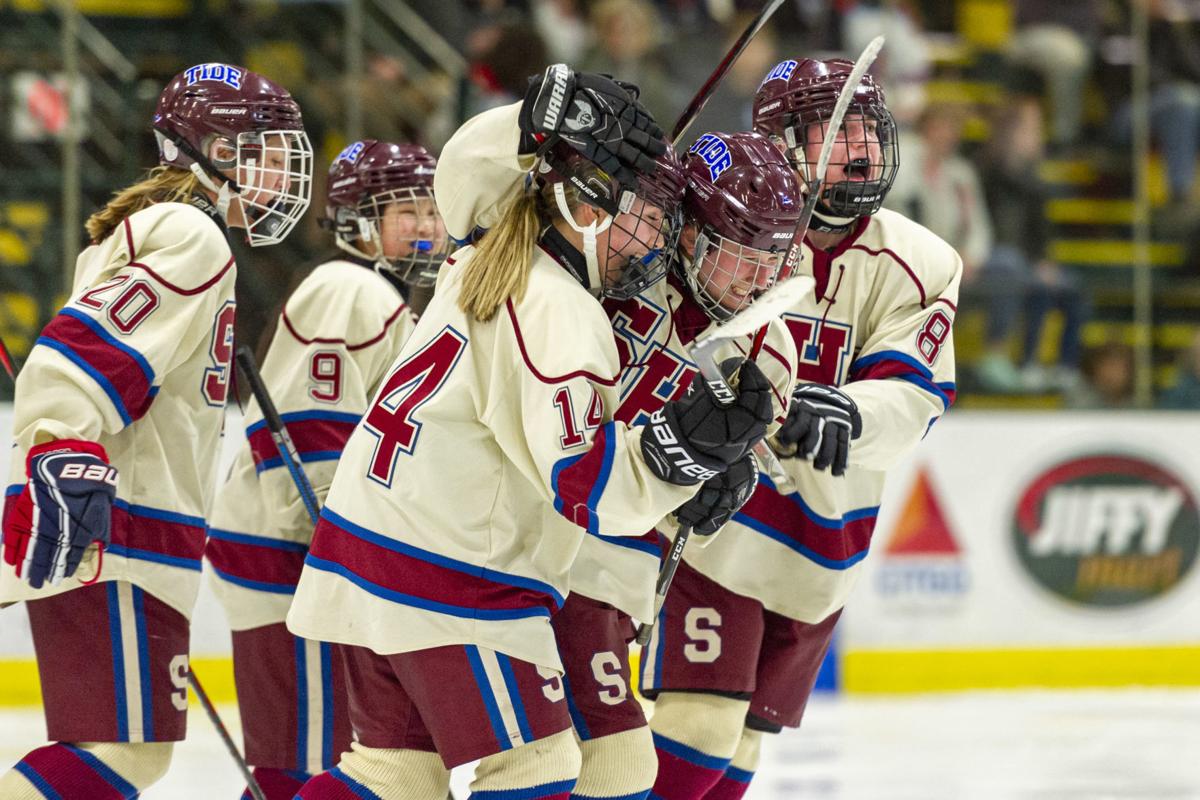 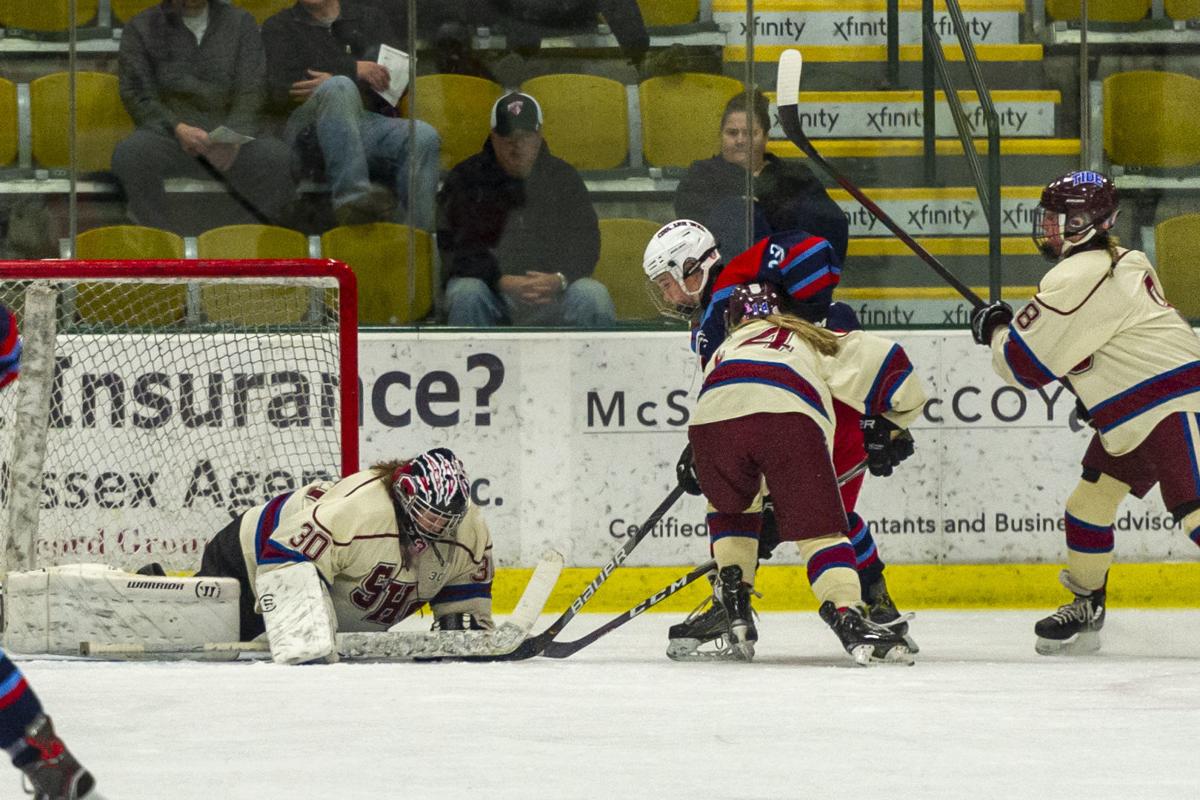 Spaulding goalie Mattie Cetin makes a save during Monday’s 4-0 championship victory over CVU in Burlington. 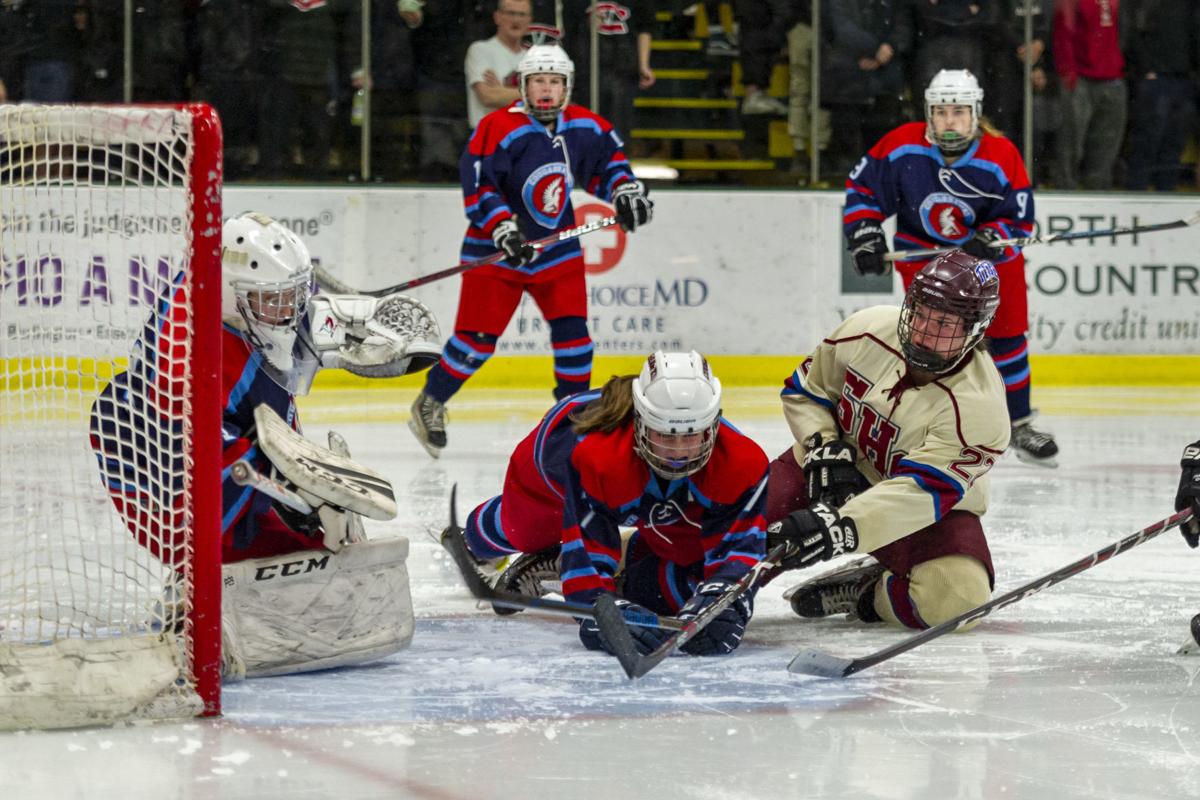 Spaulding’s Rebecca McKelvey gets low for the opening goal during her team's 4-0 championship girls hockey victory in Burlington.

Spaulding goalie Mattie Cetin makes a save during Monday’s 4-0 championship victory over CVU in Burlington.

Spaulding’s Rebecca McKelvey gets low for the opening goal during her team's 4-0 championship girls hockey victory in Burlington.

BURLINGTON — The Spaulding girls hockey team completed one of the most remarkable bounce-back seasons in Vermont history by skating to a 4-0 victory over CVU-Mount Mansfield during Monday’s Division II championship.

The Crimson Tide gave their school its first title of any kind since the boys hockey team beat CVU in the 2010 final. Coach Dave Lawrence and the Tide girls went 2-16-2 last season. But they went 22-0 this time around to become the state’s first undefeated team for girls hockey.

The University of Vermont’s Gutterson Field House was buzzing before the game. Excitement over the Granite City team has been the talk all season. The program has a strong tradition of success, but over the last few years the number of experienced players joining the team dropped. That led to several disappointing seasons, culminating with last year’s two-victory campaign.

When the puck finally dropped, the Cougarhawks had some extra jump in the first period. CVU showcased impressive speed on the Gutterson ice surface and generated a couple of excellent scoring opportunities. Kiley McClure fired a shot targeted toward the top corner, but Spaulding goalie Matie Cetin (24 saves) used her stick to deflect the shot wide. Spaulding created an excellent opportunity to get on the scoreboard when CVU was called for back-to-back hooking penalties. Spaulding had a 5-on-3 advantage for over a minute but failed to score. Their best chance was when Rebecca McKelvey’s shot from the front of the net hit Cougarhawks goalie Grace Ferguson, but a loose rebound was cleared away. The Crimson Tide relied on Cetin to keep things close early as CVU outshot Spaulding 11-8 in the opening period.

“I was stressed out,” Cetin said. “But I knew my teammates were going to be there for me, and I trusted them.”

“It took awhile to get going,” he said. “You could see they were a little tight and over-thinking it. Just like some other games this year, as the game went on, we started to get more comfortable. I think they loosened up late in the first period. Thankfully we got out of the period with no goals allowed.”

The Crimson Tide came out with more jump to their step in the second period and got on the scoreboard at 1:33. Bria Dill set things up when she fed the puck out of the corner to Rebecca McKelvey. The freshman was perched in front of the net and jammed the puck across the goal line.

The goal quickly ignited the Tide offense. And just 1:20 later, the Tide added to their lead. This time Dill received a pass from Zoe Tewksbury, who made it 2-0. Spaulding added a big third goal in the period when Cami Bell took a pass from McKelvey and buried the puck. CVU didn’t give in, and they tested Cetin with a flurry of shots late in the second period. But every chance was denied.

Spaulding added to its lead when Bell wristed home her 55th goal of the season. When the final horn sounded, the Spaulding bench jumped on the ice to mob Cetin and celebrated a state championship.

“It was amazing; I couldn’t believe it,” Cetin said. “I was glad I had my teammates with my coaches and me. It’s the best feeling in the world.”

Spaulding senior Morgan Mast, who played though last year’s two-victory season, was amazed at how far the team had come in one year.

“It feels surreal — like a dream,” Mast said. “It’s insane. I’m really speechless right now. Looking back or even at the beginning of the season, I would have never thought we would be here. I’m so proud of this group of girls. It’s such a good feeling.”

Mast, Natalie Mattson, Annie Duprey and Hailey Lafaille complete the senior class that went out champions. With the majority of the young team returning and another eager class coming up next year, Spaulding is likely to be back as a contender for years to come.

The Tide won the Division II girls hockey championship in 2002 during the sport’s inaugural season in Vermont. The Tide lost three straight Division I title games from 2009-2011, coming up short as the top seed.

Watch the Highlights from all 3 Spaulding Girls Playoff Games on the Link Above!