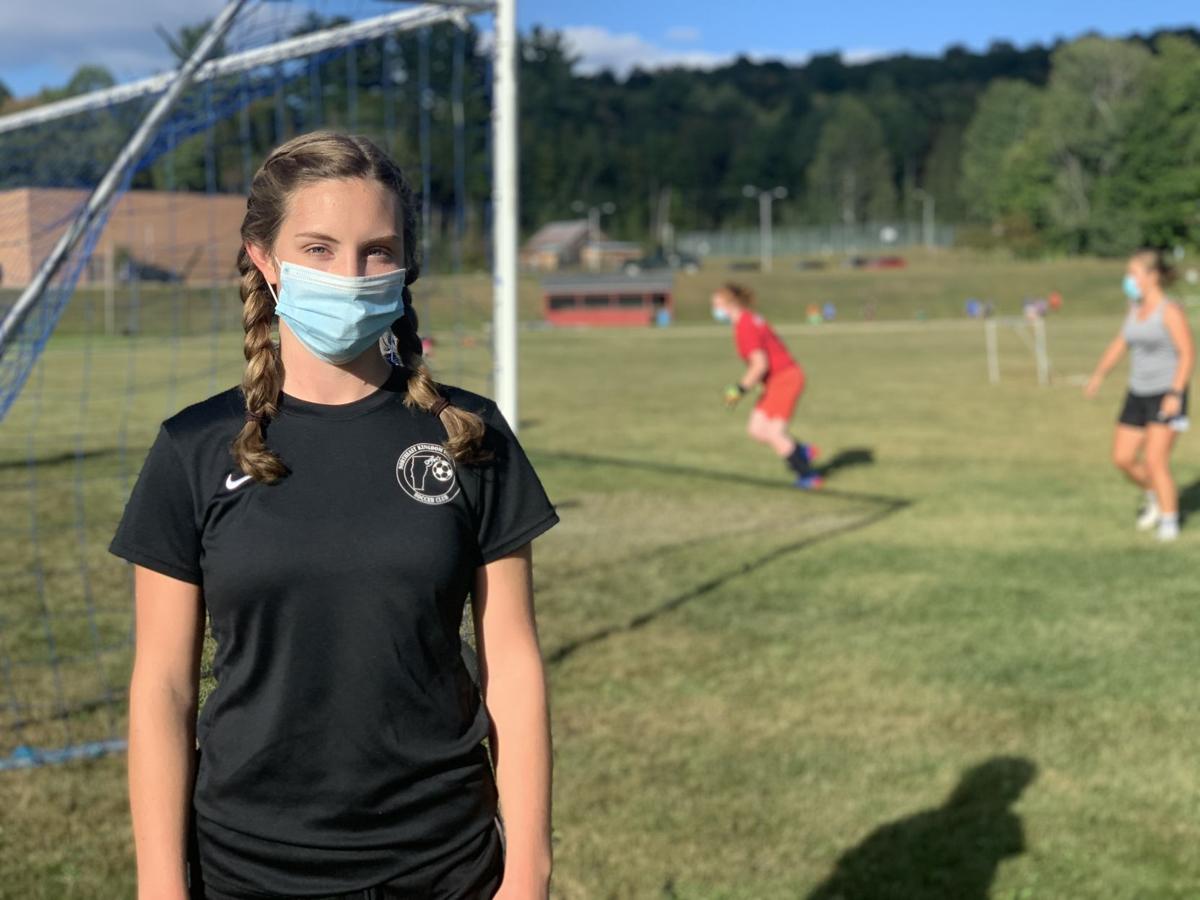 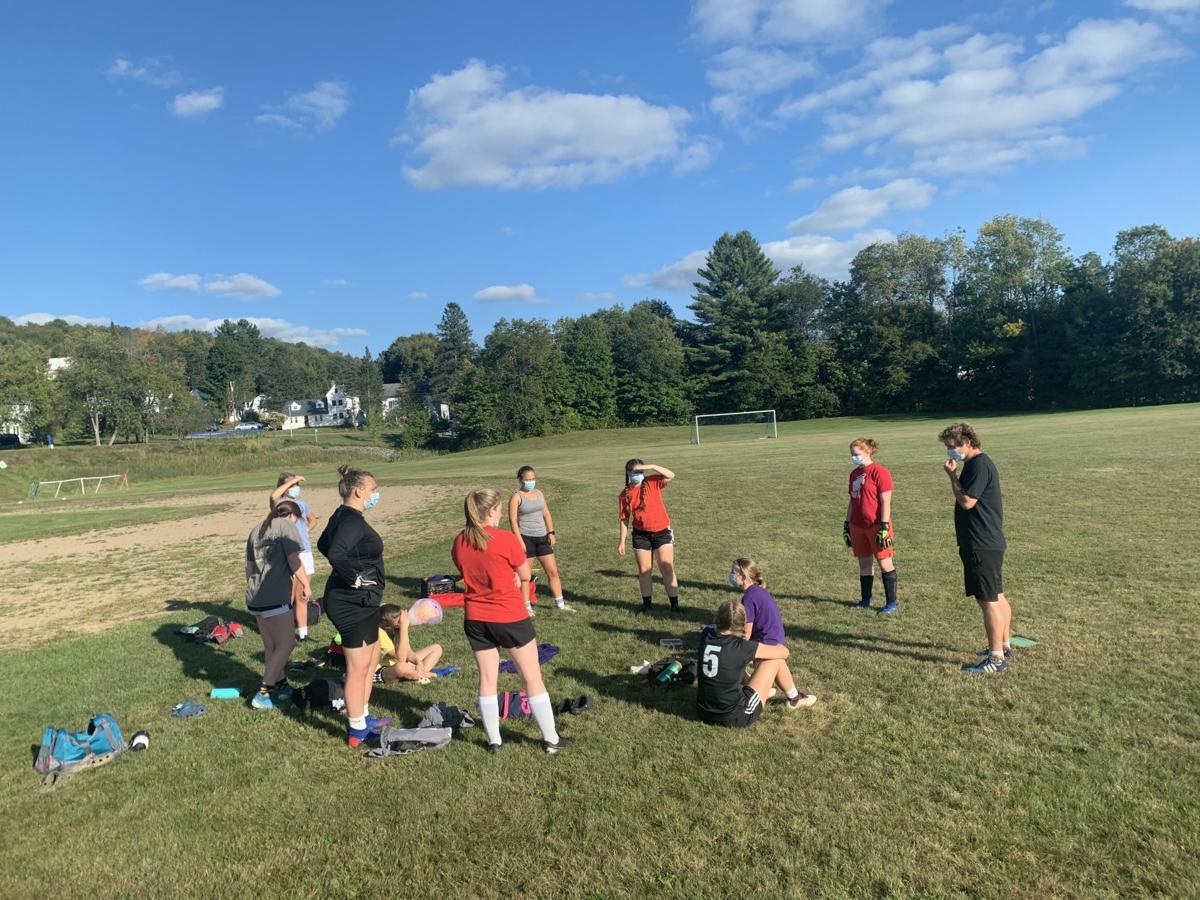 Members of the Hazen girls soccer team take a break during a recent practice in Hardwick.

Members of the Hazen girls soccer team take a break during a recent practice in Hardwick.

After earning the No. 10 seed with a 4-10 record, the Wildcats made a 3-hour bus trip to play Twin Valley and suffered a 4-0 loss in wet-and-nasty conditions.

That’s a distant memory now for coach Harry Besett, a 2006 Hazen graduate who knows that soccer seasons are not always a glorious ride.

Right now, Besett is thankful for every day he’s able to hold practice. He’s completely shifted his standards and expectations for the team heading into a first-of-its-kind school year as the world grapples with COVID-19.

One thing Besett is already optimistic about is his team’s versatility. A roster size of 14 will limit the options with subs, but the Wildcats are accustomed to playing multiple positions and they have two keepers who are skilled with their feet.

“I’m hoping that we have three subs,” Besett said. “I’m going to try and split time with my goalies, but they’re both going to be playing in the field. My hope is to utilize everyone we’ve got. And both goalies are good field players.”

Mountain Division All-Stars Macy Molleur and Natalie Geoffrey are back on the pitch, highlighting a senior group that also includes Alleigh Gabaree and Madison Bartlett. Gabaree played goalie as a freshman and sophomore before suffering an injury in 2019.

“Last year Alleigh wasn’t able play goalie because she ended up breaking her hand,” Besett said. “And Emily (Kimball) stepped up and was our freshman goalie all through the season. So she gained a ton of experience. She put in a lot of hard work and gained a lot of skills.”

Kimball is one of seven sophomores who will help offset the lack of any juniors. Alexis Christensen, Bethany Conway, Cassidy Cochran, Gabriela Stanciu, Lily Castle and Maverick Murphy round out the sophomores. Freshmen Tessa Luther, Emma Badore and Sarah Collier are expected to be impact players right out of the gate.

“The girls that are out are all solid, really great players and we’re all meshing well,” Besett said. “I wish I had twice as many of them — I wish I could double each one of them. But they’re all great, so I’m looking forward to a positive season. It’s always tough when you have freshmen playing against a team with 11 17-year-olds. But it’s just the reality of the area that we’re playing in and we’ll make the best of it.”

Defense should be one of the Wildcats’ greatest strengths, with Geoffrey returning to a starting role as a central defender.

“Natalie is a really fast, aggressive player,” Besett said. “She’s really competitive and she’ll do great for us in the middle of the field. Lily Castle was an outside fullback last year and she’s probably going to move to the center fullback role this year to support Natalie. She’s kind of like Natalie’s protege: She’s aggressive, she gets her body in front of the ball and she’s not afraid to be physical.”

The Wildcats have earned 10 semifinal appearances, punching a ticket to title games in 1985, 1986 and 1987. This year they will face Danville twice in addition to matches against Enosburg, BFA-Fairfax, Missisquoi, Oxbow, Winooski and RIchford. The season kicks off Sept. 29 at Enosburg and will wrap up Oct. 23 with a home match against Danville. Normally teams play 14 games in the regular season, but this year the Northern Vermont Athletic Conference pushed opening matches back to Sept. 28 at the earliest due to the pandemic.

“It’s definitely hard to miss half of your season,” Molleur said. “Missing out on summer soccer and then preseason, and now games are pushed back and there are only half as many. But I’m feeling positive. I’m just glad I’m able to play and I’m going to try and make the most of it. We have a few new freshmen who are forwards, and a couple defenders that are going to fill in for our seniors that we lost last year. Alleigh played goalie two years for us before last year, and she’s coming back into it.”

Gabaree and Kimball will both be key defensive assets when they’re not playing goalie. Luther, Badore and Collier are also likely to contribute as fullbacks, and all three will face a steep learning curve as they prepare to make their varsity debuts. Luckily for the Wildcats, Geoffrey will offer composure and organization as her younger teammates adjust to the speed of varsity play.

“Natalie is our most aggressive defender,” Molleur said. “And Lily and Bethany both played outside defense last year, so this year it won’t be anything new. Gabby and Maverick are strong midfielders who played last year for us. Madison is a strong striker and also a strong playmaker, so we switch back and forth. Sometimes we do two strikers, and one of us falls back and plays that playmaker.”

Besett plans to utilize Molleur at a few different positions in order to mix things from game to game.

“Macy is hungry for goals, but she’s also great at assisting,” the Hazen coach said. “She has some good vision and she can play some good through balls. And I think she’s going to pair up with a few of our really good sophomores that gained a lot of skills last year as freshmen. And more offensive freshmen came out this year.”

Even if Hazen suffers a few early losses, it will be easier for players to stay upbeat as they focus on the long-term goal of earning a victory in the Division IV playoffs. During past years the prospect of playing D-III powerhouses like Stowe or Peoples Academy could be daunting, but now the post-season brackets are likely to be more balanced.

It’s clear that 2020 won’t be a normal fall for any team in Vermont, and Hazen’s first-year players are going to have to learn a lot on the fly. There may be some matches where every member of the Wildcats has to play the full 80 minutes, so conditioning should improve naturally over the course of the season.

“I told them during the first practice that obviously it’s hard to run in a mask,” Besett said. “And I’m not telling them that they have to because I’m making stuff up. It’s the rules. And we’re lucky that we have a season. Yeah, it’s uncomfortable to do it and it’s not fun. But if we can get beyond being annoyed that we have to do it, and just say, ‘Well, at least we get to do it.’ We just took that mentality and there hasn’t been much griping or complaining. They’re doing a great job.”