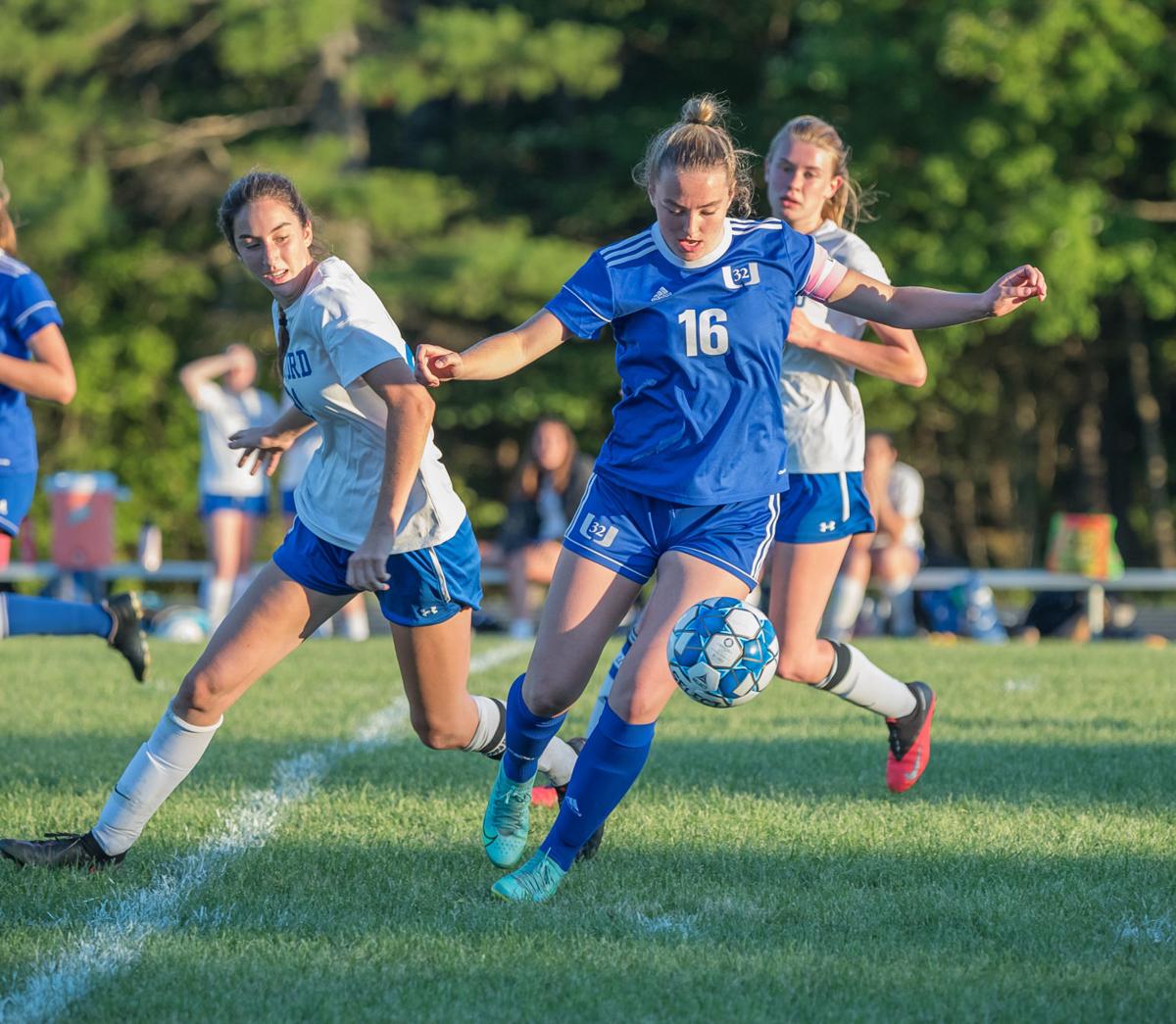 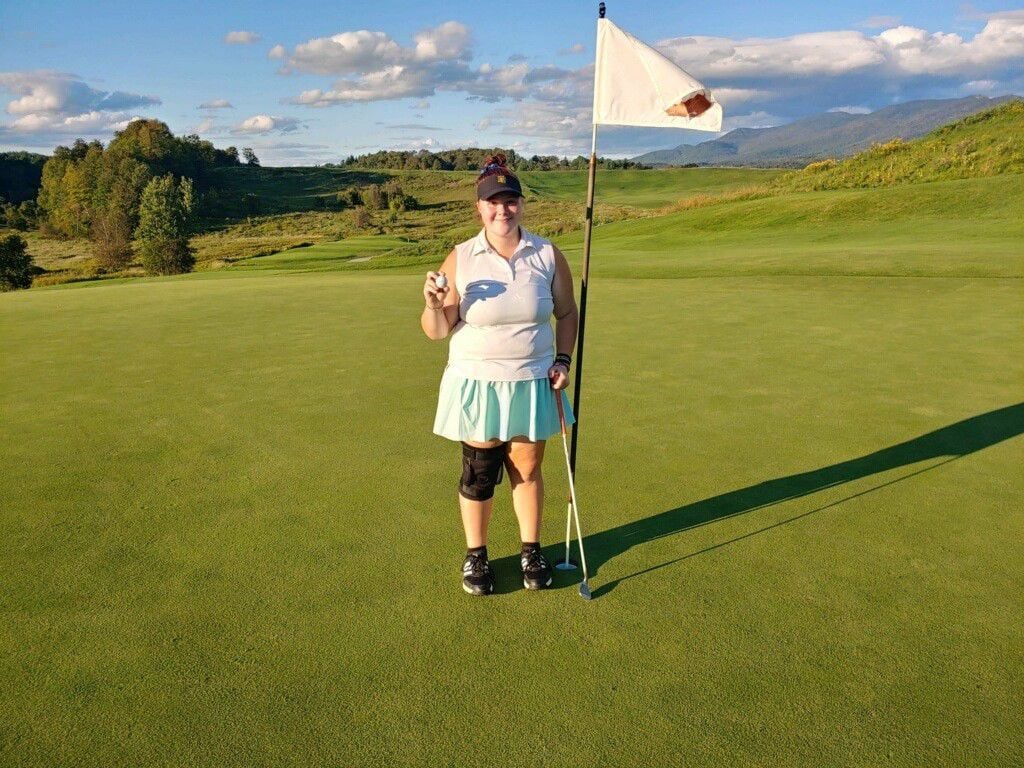 Harwood golfer Jordan Hunter poses on the eighth green after recorded a hole-in-one Monday at the Country Club of Vermont. 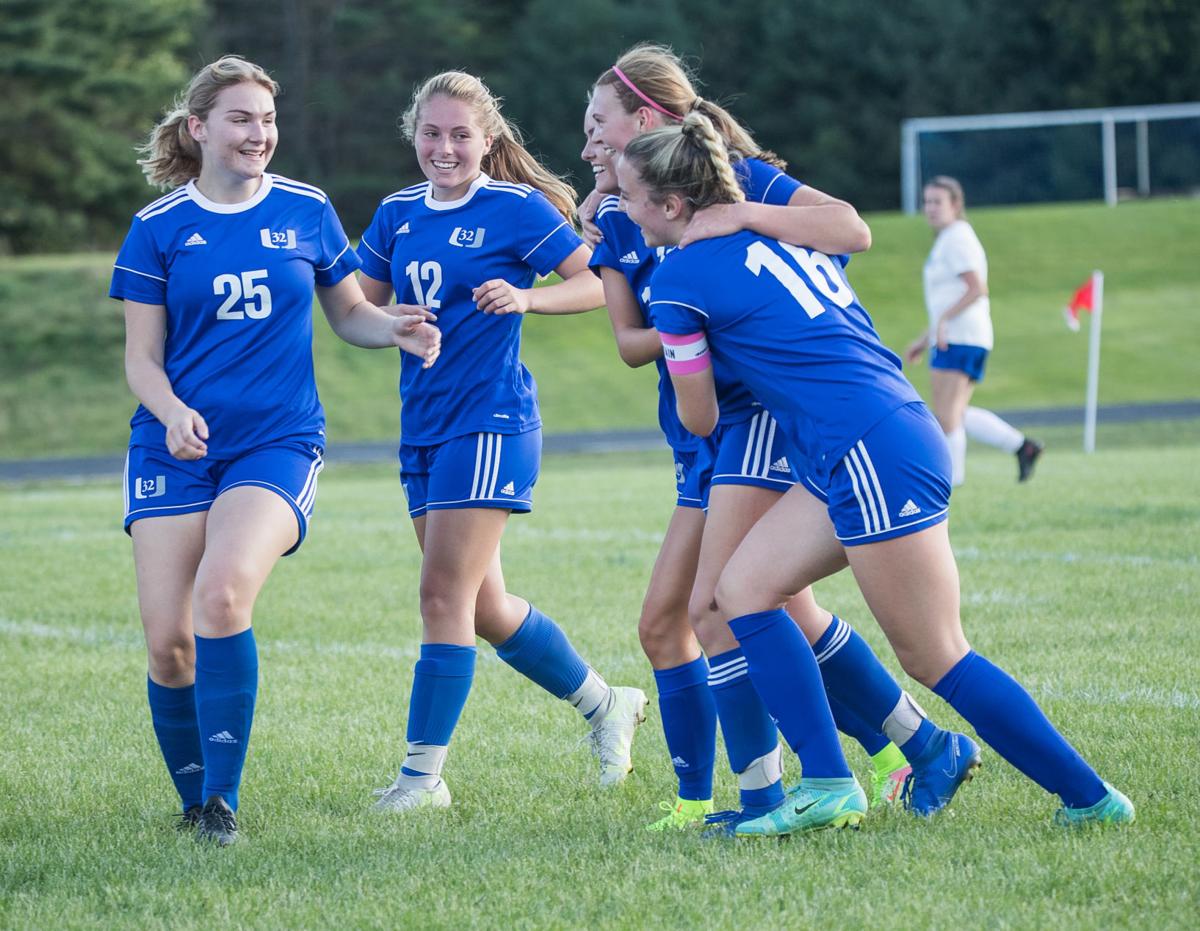 U-32 players celebrate after their team scored the opening goal during Monday's 1-1 girls soccer draw with Thetford. 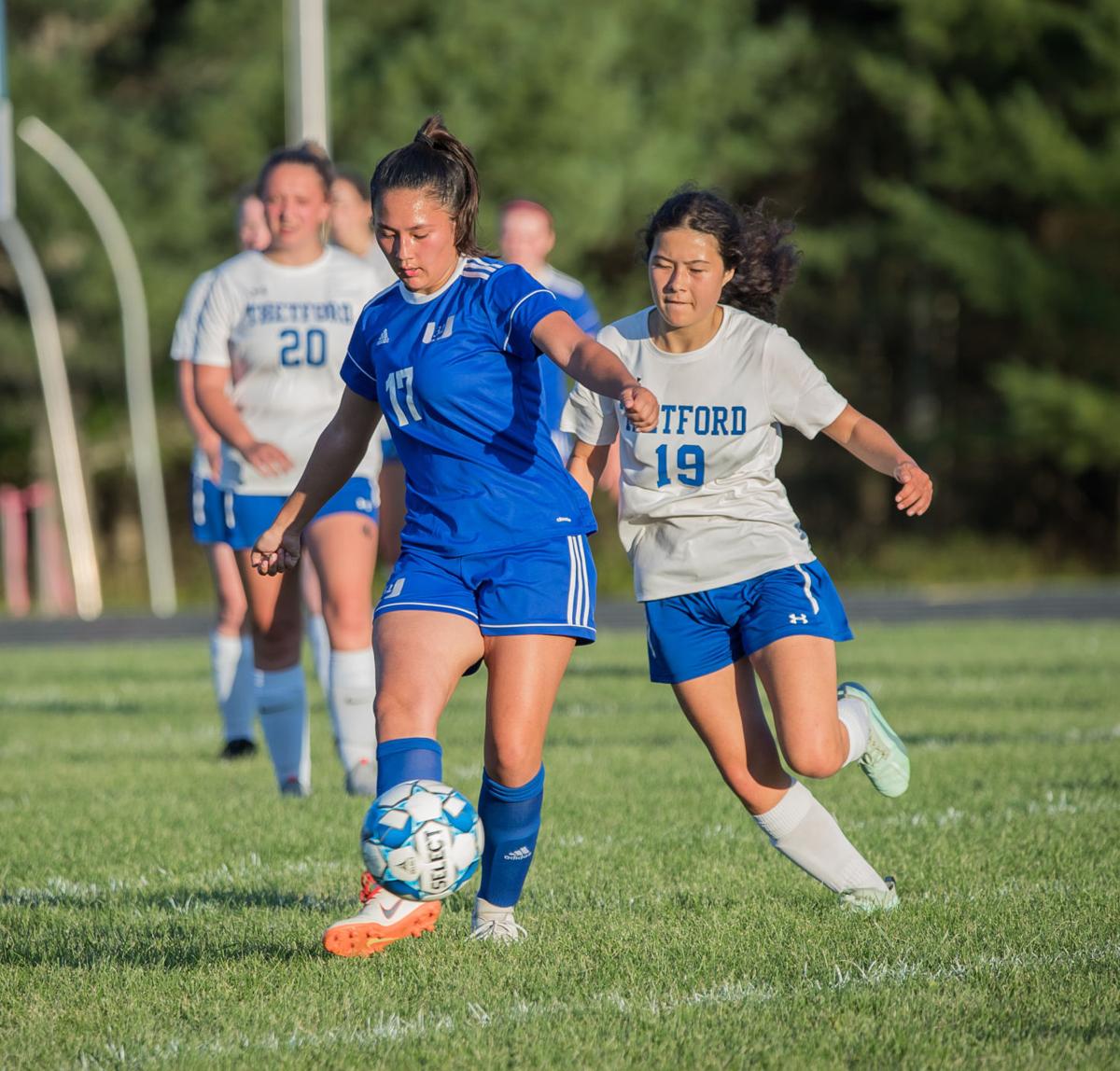 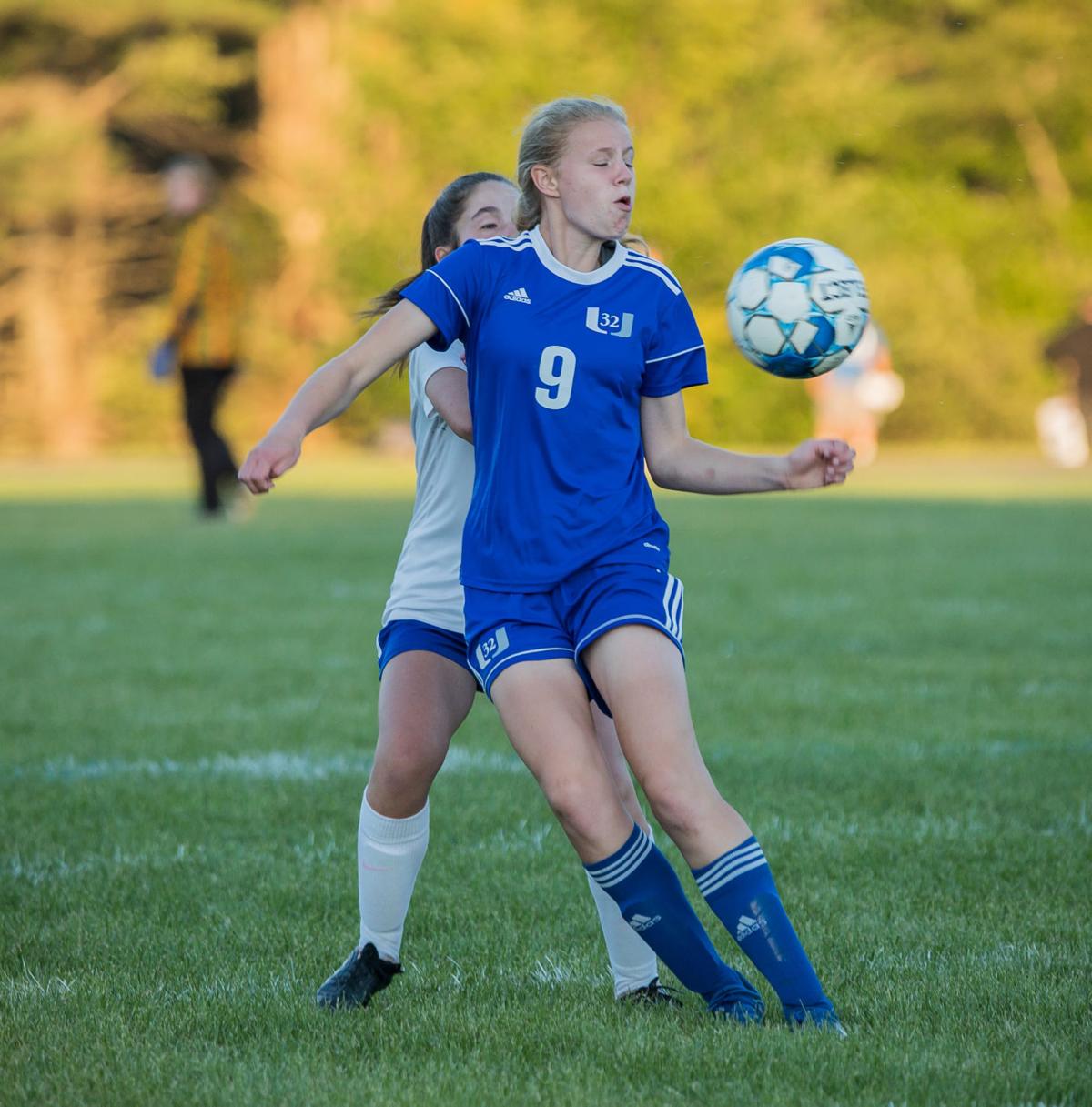 Harwood golfer Jordan Hunter poses on the eighth green after recorded a hole-in-one Monday at the Country Club of Vermont.

U-32 players celebrate after their team scored the opening goal during Monday's 1-1 girls soccer draw with Thetford.

Goalie Evie Moore made four saves for the Raiders, who led 1-0 at halftime after Tegan O’Donnell set up Alyssa Frazier. The reigning Division II champs tested Hewes late in regulation and during extra time, but the D-III Panthers held their ground.

“We had more opportunities into overtime, especially the second period,” U-32 coach Steve Towne said. “We had a couple balls where if their goalie didn’t hold onto it, we had players coming in. And we hit it just wide of the post a couple times at the end.”

The Raiders earned shutout victories over Hartford and Lake Region at the start of the season and carried that momentum into Monday’s clash. U-32 pulled ahead in the 18th minute when Frazier collected an O’Donnell pass and curled a shot inside the far post.

“Tegan had the ball and slotted it outside right,” U-32 coach Steve Towne said. “They were up in the final third, near the right corner. And from 20 or 25 (yards) out, Alyssa cracked a shot that dipped over the keeper’s head.”

U-32 headed into halftime with the one-goal lead and continued to limit Thetford’s chances after the break. The Panthers happily took advantage of a slight defensive miscue by the Raiders to knot things at 1 midway through the half.

“The ball was hit in and it bounced around a little bit and she volleyed one in,” Towne said. “We didn’t get a foot or a clear on the ball, it bounced to her and she smashed it.”

U-32 (2-0-1) will host Harwood at 7 p.m. Saturday for Homecoming. The Raiders eliminated the Highlanders during last year’s semifinal.

“We held up pretty well fitness-wise for our first overtime game,” Towne said. “The game wasn’t super physical, but both teams ran hard. They’ve been strong for a lot of years now, and you know that games against them are going to be tough no matter what.”

Thetford (2-0-1) will travel to play Lake Region at 11 a.m. Saturday. The Panthers kicked off the season with a 4-0 victory over Enosburg and a 4-3 win vs. Peoples before containing the Raiders.

“It was just back and forth in the midfield a lot,” Towne said. “A lot of the shots we had on target were from out a ways — and the same for them too. Nobody really broke each other down in the defensive third. I knew they had a strong offense, so we put some players in defensive roles to match up. And I give credit to a few of the younger players who stepped up: Sun Meehan, Yvette Petrella and Jin Clayton. I asked all three of them to take on a lot of responsibility. Yvette and Sun are brand new to varsity, and Jin played a little bit last year. They’re going into each match with not a lot of experience, so they did a good job.”

Weslie Carlson and Baranyay scored in the second half before PA capped the scoring on a Wildcats own goal. Mia Smith and Anna Isselhardt recorded assists and teammate Emma Courtemanche recorded a three-save shutout. Goalie Madeline Kaiser stopped 13 shots for Hazen.

“After the break (we) fought to get back into the game,” Hazen coach Harry Besett said. “But multiple attempts at tight passing in the midfield ultimately ended up being thwarted by the stalwart Wolves back line. …We will have eight days to figure out how to bounce back against Enosburg at home again next Tuesday. “

DUXBURY — Tanum Nelson and Louisa Thomsen combined to score six goals during a blowout victory over the Vikings.

Sophomore Tessa Jernigan found the back of the net twice. Maeven Cattanach tallied her first varsity goal, while Cierra McKay and Emma Ravelin also scored. Goalies Cierra Fiaschetti and Poppy Woods combined efforts in the shutout The Highlanders (1-0-1) will travel to play Lamoille at 4:30 p.m. Tuesday.

Cloutier gave Stowe a 1-0 lead in the 43rd minute before Hailey doubled the lead in the 66th. Allen capitalized on a free-kick opportunity in the 80th minute.

WATERBURY CENTER — Medalist Jordan Hunter used a gap wedge off the eight tee box and recorded a hole-in-one Monday for the Highlanders.

The sophomore fired a 48 after acing the 127-yard par 3 at the Country Club of Vermont. It was the second hole-in-one of her golfing career.

“It’s an uphill hole and it goes out of sight,” Harwood coach Brian McCarthy said. “She was playing with two other girls — one from Lake Region and one from Peoples — and the coaches were behind her. When she teed off, one of the girls said, ‘That could be in the hole.’ And when they got up there, they saw that it was.”

McCarthy has coached for 20-plus years at Harwood and only had one other golfer — Jarek Hammerl — ace a hole during competitive play.

“The game of golf can be so humbling and rewarding, almost in the same day,” McCarthy said.

“We were very consistent and it’s how I’m hoping we’ll perform this year,” McCarthy said. “One of our golfers was sick, and he might be our No. 3 or 4 guy. So I have five boys that are going to be fairly consistent. It’s a tough game, but I’m happy with where we’re trending. This was a nice bounce back from our performance at the Country Club of Barre last week.”

Harwood will return to action Wednesday at Northfield Country Club.

RANDOLPH — Five Harwood girls cracked the top-10 during a 31-point victory over runner-up CVU at the Randolph Invitational.