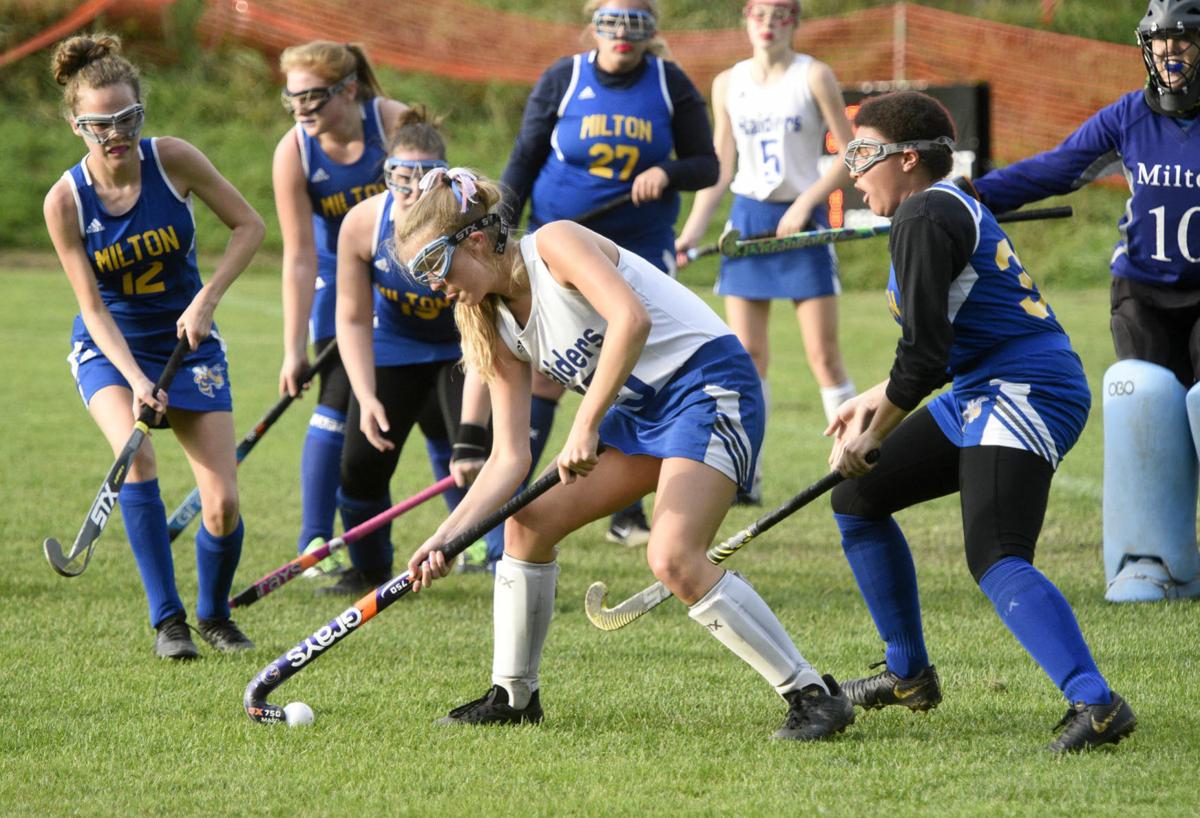 U-32’s Alaina Beaugard dribbles away from the defense of Milton’s Angie Rivers during the first half of Thursday’s game. 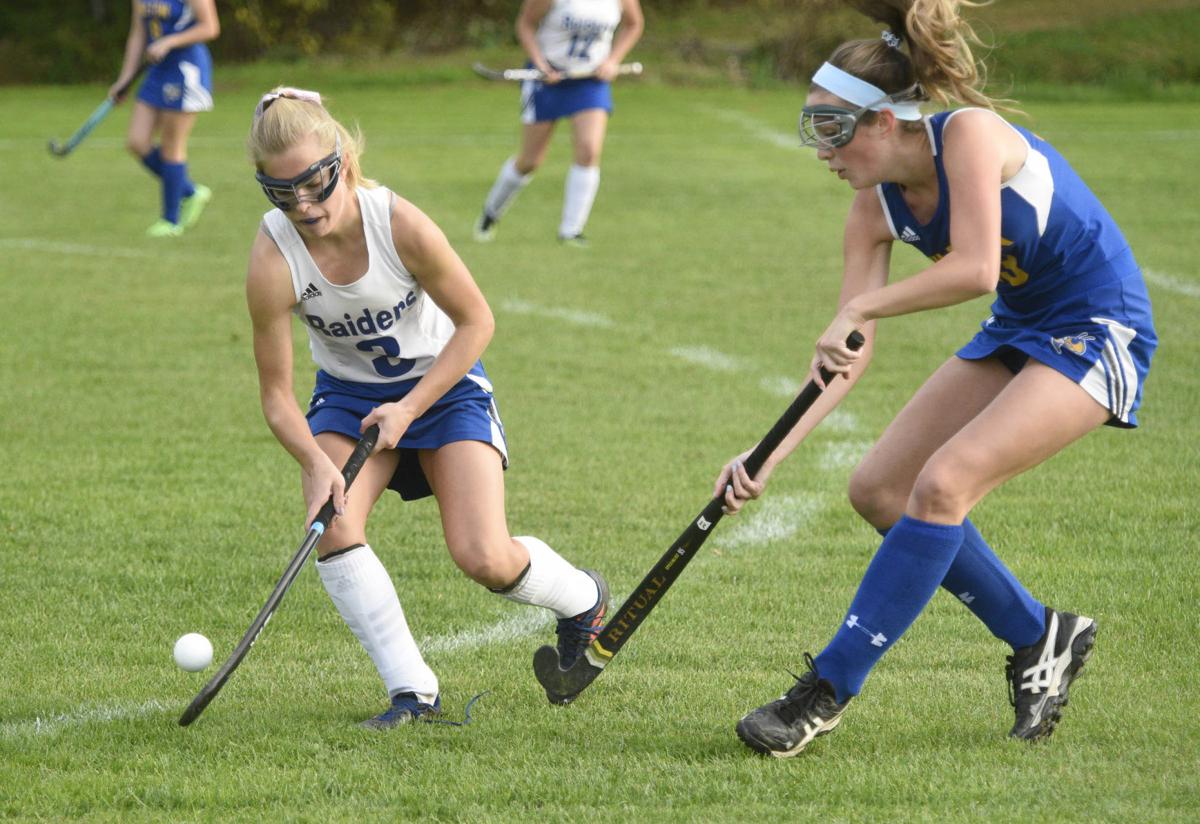 U-32’s Megan Ognibene intercepts a pass from Milton’s Molly Toner during the first half of Thursday’s game.

U-32’s Alaina Beaugard dribbles away from the defense of Milton’s Angie Rivers during the first half of Thursday’s game.

U-32’s Megan Ognibene intercepts a pass from Milton’s Molly Toner during the first half of Thursday’s game.

“Overall the team has strong leaders and the players have really been showcasing their stick skills to play good field hockey,” U-32 coach Rosie Kreis said. “I’m very proud of how they have meshed together throughout the season.”

BARRE TOWN — Goalie Abigail Stacy netted her fifth shutout Thursday and the Crimson Tide earned their most impressive result of the season.

Zoe Tewksbury, Lexi Royce and Morgan Mast scored for Spaulding, which gained key points in its quest for one of the top four seeds in the upcoming Division II playoffs. The Tide improve to 8-1-2, while the Raiders fall to 8-3. The teams will face off again at 3 p.m. Saturday in Stowe.

Stowe outshot Spaulding 8-6 but the Tide held a 10-5 advantage on penalty corners. Tewksbury scored with 5:53 left in the first half for a 1-0 advantage at the break. Neither team generated many quality scoring chances for the opening 20 minutes of the second half. Spaulding’s Lexi Royce found the back of the cage with 8:59 left to play, extending the lead to 2-0. Tide scoring leader Morgan Mast added the final goal with 25 seconds on the clock.

Claire Obeldobel tucked away one goal in the victory. Amy Yando scored both goals for PA on assists by Anna Isselhardt.

“We played really well in the first half, but they just have some scorers that we had a difficult time stopping,” PA coach Jim Eisenhardt said. “Outside of that, we did well. I wasn’t unhappy. But you can’t give up five goals and expect to win. We came out in the second half, let a girl get by us and took her down from behind — so we gave them a penalty kick. We scored two goals and had other chances, but defensively we have to get better. We’ve got to be able to beat Thetford, and they’ve got some girls who are also good offensively.”

Keeper Evie Moore blocked six shots for the Raiders, who led 3-1 at halftime. Goalie Josie Simone recorded nine saves for the Wolves. U-32 (10-1) will host Stowe at 11 a.m. Saturday. Peoples (7-3) will travel to play North Country at 10 a.m. Saturday.

”I start six freshmen and a sophomore and we’re learning,” Eisenhardt said. “But playoffs aren’t far away and we’ve got to get up to speed quickly.”

MARSHFIELD — The Trojans were tasked with playing two games in 24 hours and suffered their second straight one-goal loss Thursday. On Wednesday, Twinfield endured a 1-0 defeat against Mid-Vermont Christian, and the recovery time was minimal before the Trojans laced up their cleats again.

“It was our third game in three nights, so everyone is a little fatigued, and we’ve also suffered several key injuries in the last week,” Twinfield coach Peter Stratman said. “Despite those obstacles, the boys actually moved the ball well and created several beautiful passing sequences. We just had trouble scoring. Christ Covenant finished their attempts, and we didn’t.”

Twinfield led 2-0 at halftime following goals by Remy Maas and Gavin Fowler. In the second half, Nathan Mulligan and Michael Mulligan scored for Christ Covenant to power the comeback effort.

”We controlled most of the possession in the first half and fired 12 shots on goal,” Stratman said. “We shifted positions a little in the second half, which disrupted our momentum. Ultimately, Christ Covenant played a good game. They worked hard and capitalized on our miscues.”

BELFAST, Maine — Harwood sophomore Ava Thurston set a program record by finishing the Maine Festival of Champions with a 5-kilometer time of 18 minutes, 16.72 seconds. She placed third out of 207 finishers in the girls seeded race.

In 2015, Harwood’s Erin Magill posted a time of 19:09 at the same race to eclipse the previous record of 19:10 set in 1998 by Caitlin Compton at the Burlington Invitational. Magill returned to Maine in 2016 and finished in 19:04. Thurston was close to that time two weeks ago at the Manchester (N.H.) Invitational, crossing the line first in 19:09. Her time at the Festival of Champions beat her freshman PR by 43 seconds.