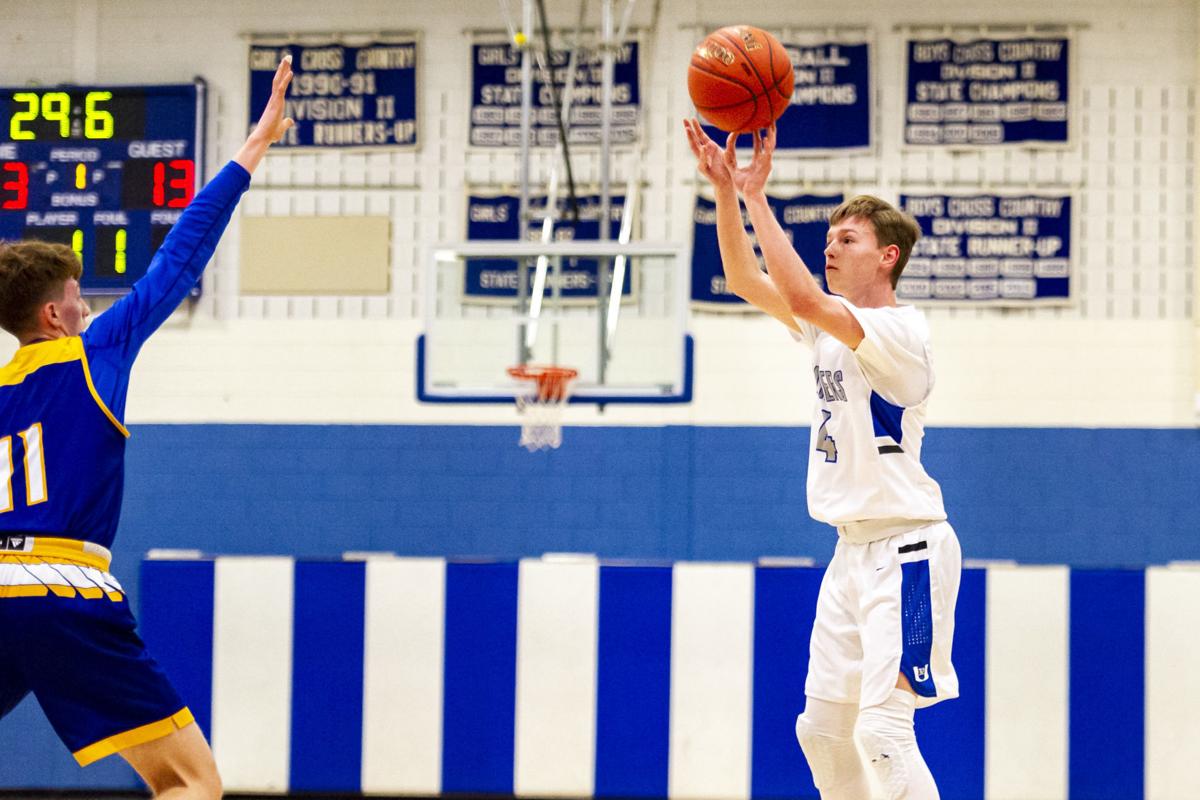 U-32’s JP McGinley, right, puts up a 3-pointer at the end of the first quarter of Monday's boys basketball matchup with Lamoille. 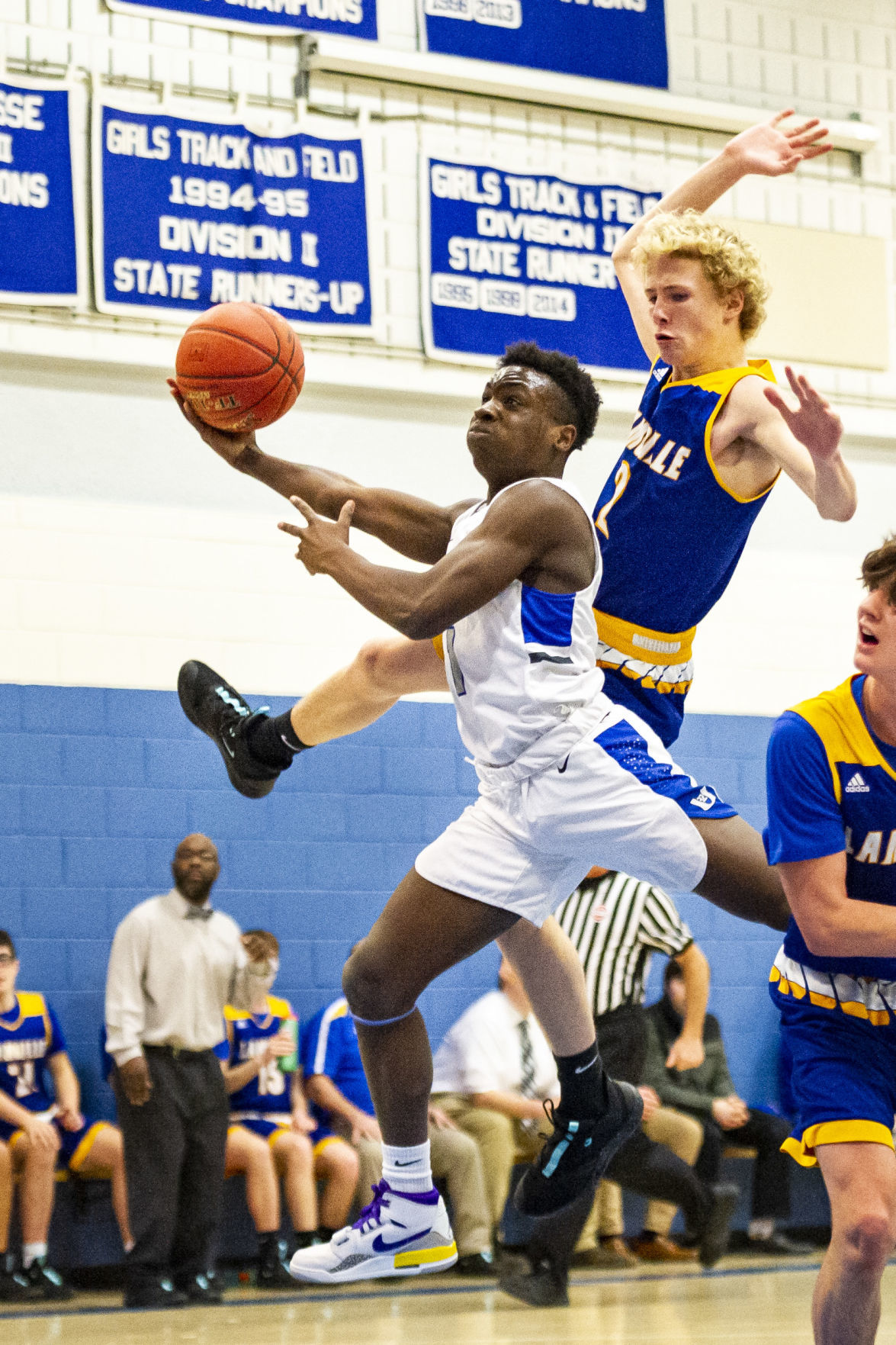 U-32’s Aiden Hawkins rises to the hoop past the high-flying defense of Lamoille’s Ethan Alexander during Monday night’s matchup. 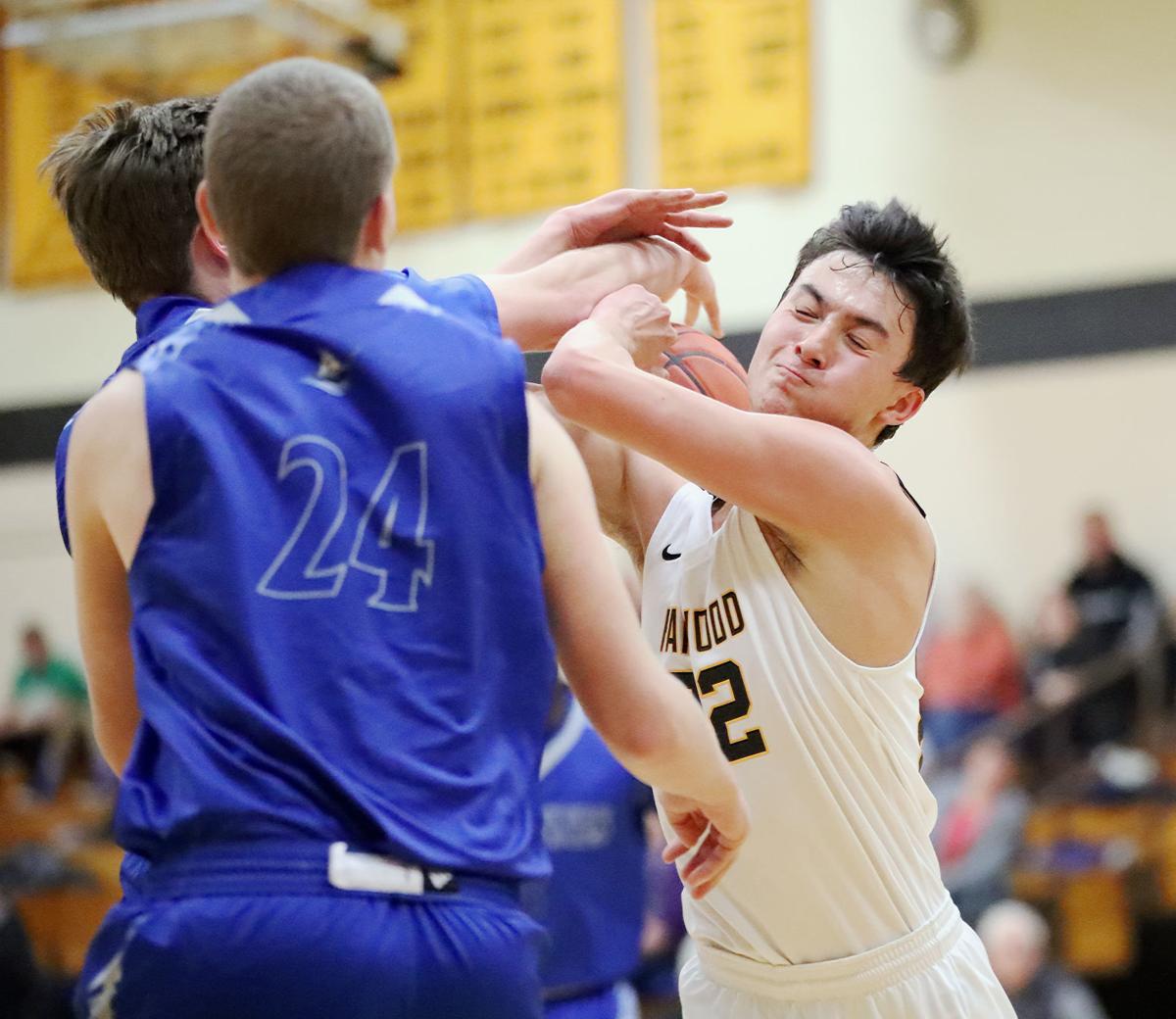 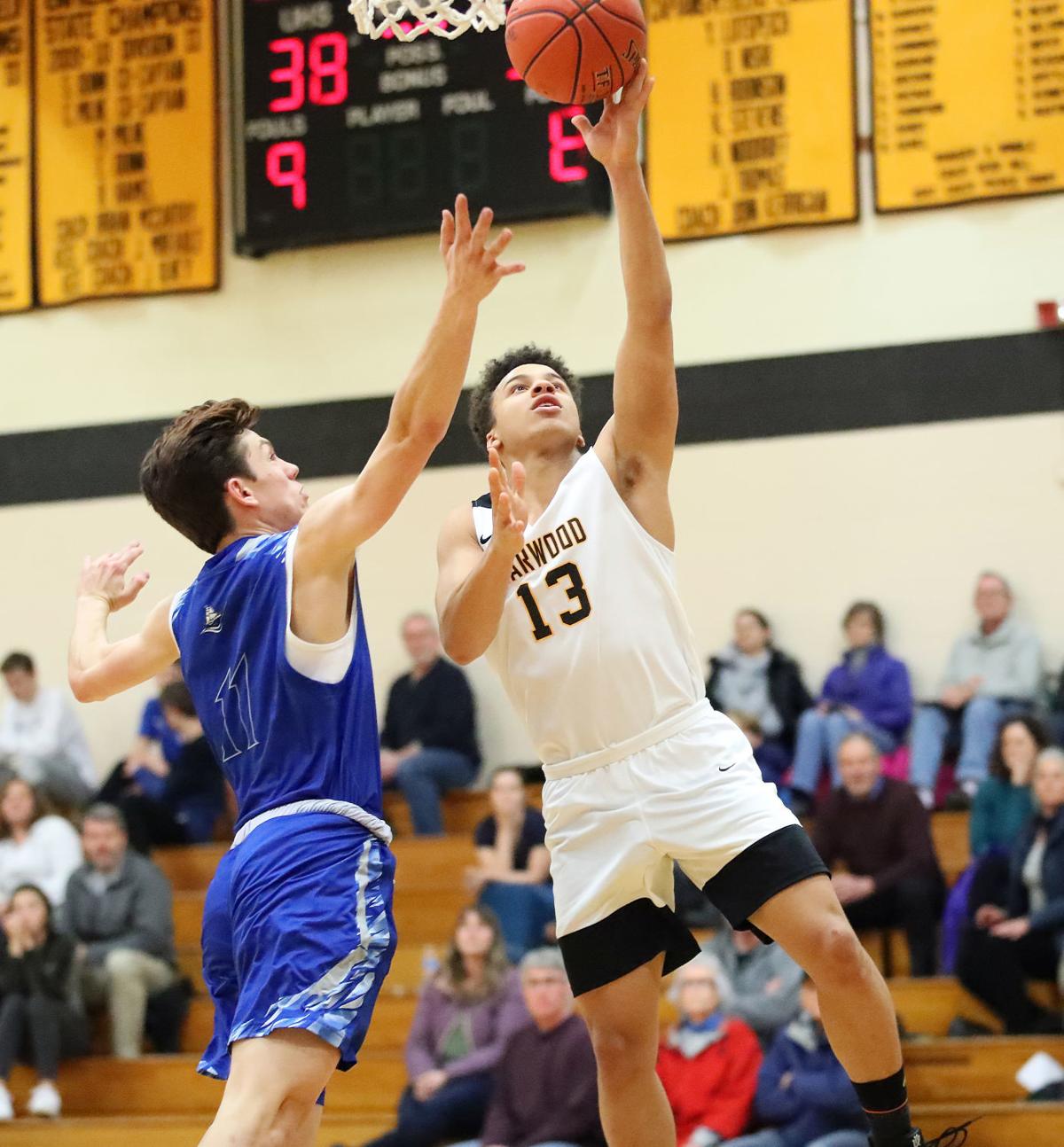 Harwood Ezra Samuel, right, goes up for a layup during Monday's boys basketball victory over Vergennes. 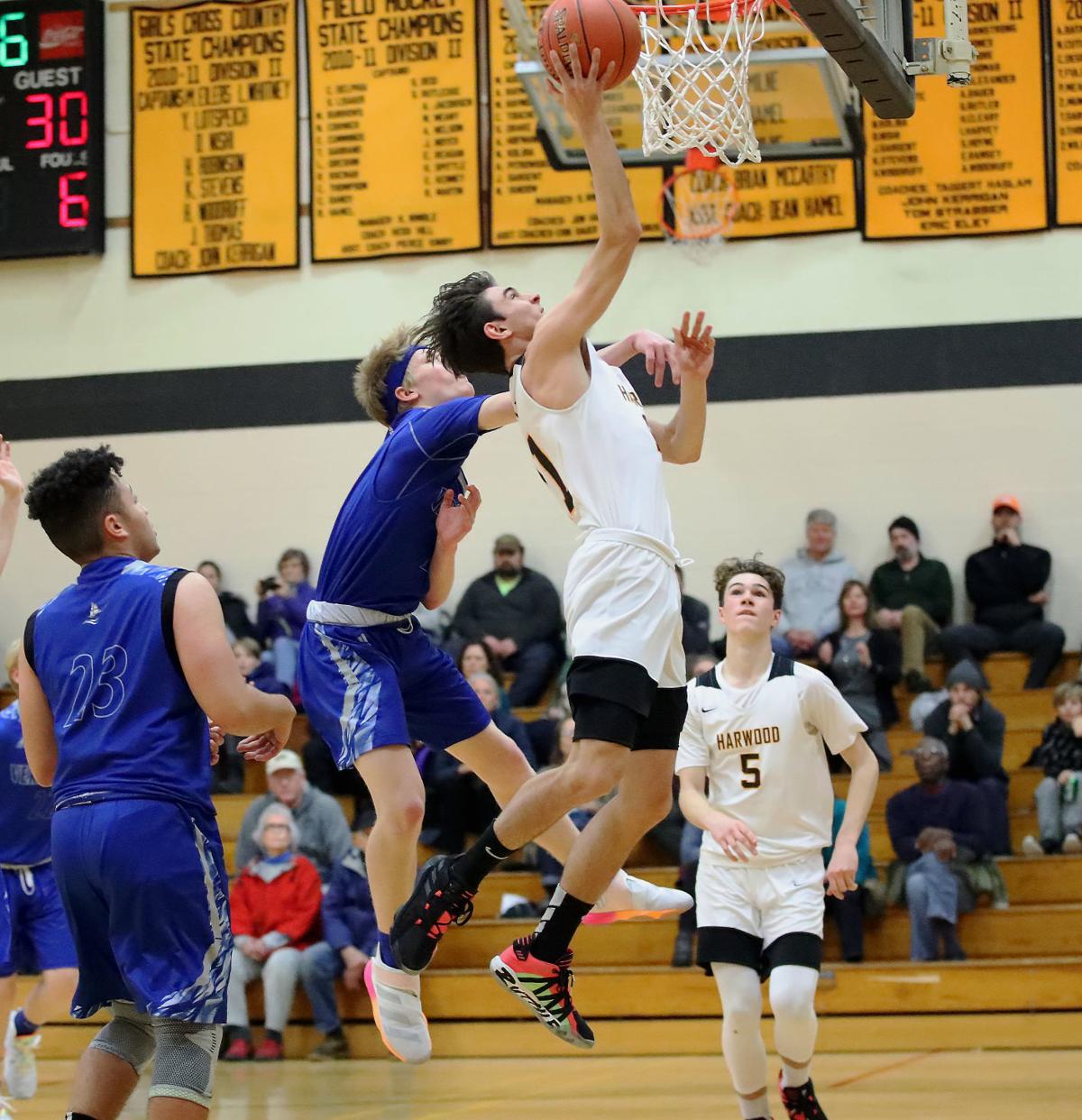 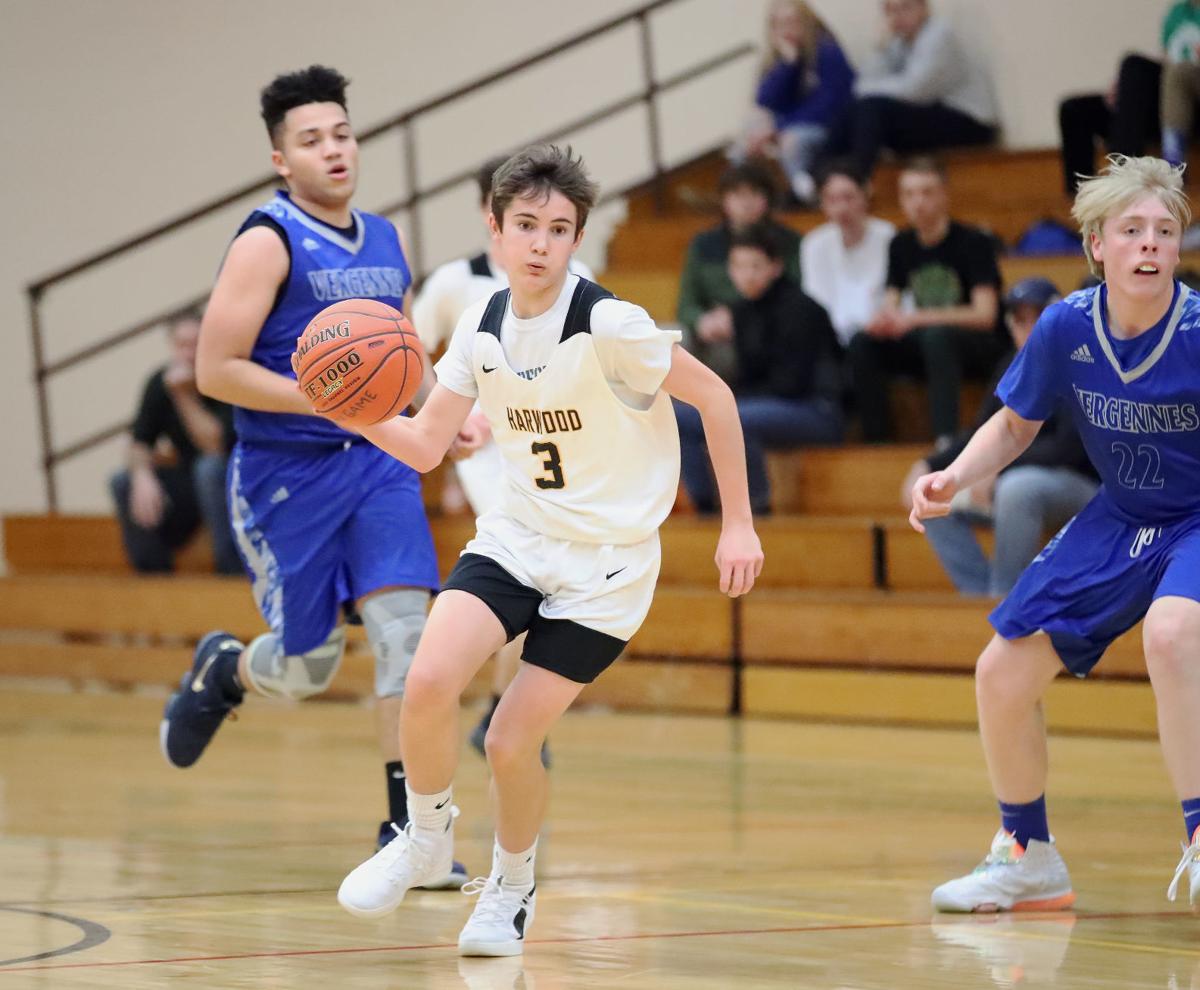 Harwood guard Cooper Olney dribbles up the court during Monday's boys basketball victory over Vergennes. Olney made a pair of 3-pointers for the Highlanders.

U-32’s JP McGinley, right, puts up a 3-pointer at the end of the first quarter of Monday's boys basketball matchup with Lamoille.

U-32’s Aiden Hawkins rises to the hoop past the high-flying defense of Lamoille’s Ethan Alexander during Monday night’s matchup.

Harwood Ezra Samuel, right, goes up for a layup during Monday's boys basketball victory over Vergennes.

Harwood guard Cooper Olney dribbles up the court during Monday's boys basketball victory over Vergennes. Olney made a pair of 3-pointers for the Highlanders.

EAST MONTPELIER — The undefeated U-32 boys basketball team has made a habit of playing lock-down defense in the first half before sealing the deal offensively in the fourth quarter.

The top dogs in Division II did it again Monday, outlasting Lamoille 57-46.

Alec Lemieux (six points, six rebounds, three assists) and Anthony Engelhard (six points, five rebounds) were also sharp for U-32. Kellington grabbed 12 rebounds for the Raiders, who made 11 of 17 attempts from the foul line. Lamoille was 5 of 11 from the stripe. Jackson Stanton scored 16 points for the Lancers and teammate Shane Royer added 15 points after making a trio of 3-pointers.

“Lamoille is scrappy and they move the ball well,” U-32 coach Dan Gauthier said. “We came out a little lackluster on the defensive end to start, and Jackson Stanton gave us some issues getting into the paint. In the second quarter we talked about getting back to our defensive principles, and our guys did a great job with that. Their five points came on two shots, and it’s hard to ask for more than that at the varsity level. It was an evenly played second half and we were able push things out of reach in the fourth quarter. We did a good job job getting to the basket and knocking down some free throws.”

“Essex is a physical team that’s running with all the rest of the teams in Chittenden County, so I’m sure that will be a competitive matchup for us,” Gauthier said.

BURLINGTON — Jensen Daly poured in 20 points and the Seahorses used a 22-6 run in the third quarter to deny the Crimson Tide on Monday.

“We played immensely hard,” Spaulding coach Jesse Willard said. “The effort that we put into this game was pretty solid. We were just getting beat with positioning on the boards and we were giving up a lot of size to them. But there were moments where I thought we played well. In the first half they would open up a lead with some pretty good runs, we’d get it back to four or five and then they’d open it up again. But nobody really took control.”

DUXBURY — Freshmen Cooper Olney and Cole Hill combined for nearly half of their team’s offensive output to help the Highlanders snap a seven-game losing skid Monday.

“Ezra hit a couple big foul shots to end the game,” Harwood coach Jay Bellows said. “We’re setting screens and the team is moving the ball around well. And we had big rebounding tonight from Michael Fuller and Chris Fuller.”

Harwood closed out the first quarter with an 8-6 advantage. The Highlanders built a 21-12 halftime lead before the Commodores trimmed the deficit to 28-27 at the end of the third quarter. Vergennes struggled to score down the stretch and watched Samuel slam the door from the free-throw line.

“We’re making so many big changes this year and they’re finally starting to live in the moment a little more,” Bellows said. “The old offense, a lot of it was outside the 3-point line. Now we’re having a lot of screens and a lot of motion. It’s hard to get fluid in that kind of offense when you’ve never done it. But nobody likes to play against a team that sets good screens. And Michael Fuller has been the engine for us with that. He’s one of the our three great senior leaders along with Ezra and Brian (Gilhuly).”

MARSHFIELD — Alycia Dickinson made her first start of the season for the Blue Devils and scored the opening six points of the game, setting the tone for Monday’s victory.

“We really did a nice job of making the extra pass and getting the best shot available,” Williamstown coach Sid Sweet said. “We stressed team defense and playing within ourselves. And it was our most complete team effort this season. Grace Brink came up from JV and gave us good minutes. She got an assist and played strong defense.”

“Like almost all of our games, we were in it at halftime,” Twinfield coach Jason Cushing said. “We came out flat again in the third quoter, and most teams have capitalized and beat us in the third quarter.”

“It was a nice quality road win against a good Division II team,” Thetford coach Eric Ward said. “We gave Springfield their first loss, and they gave us quite a game. I am very happy with the girls tonight. We were making adjustments as we needed to. We did some adjusting on Wardwell, with Emma Colby doing a nice job defending her.”

Thetford (7-1) will host Lyndon on Saturday. Springfield falls to 5-1.

ESSEX — Paige Winter (12 points) led the Hornets past the Raiders on Monday. Adrienne Noyes added nine points Essex. Teammates Mary Finnegan and Noelle Lyone scored eight points apiece. Eliza Garland (12 points) led U-32. The Hornets enjoyed a 14-5 lead after the first quarter and were up 31-17 after two. Essex carried a 47-25 lead into the final quarter.