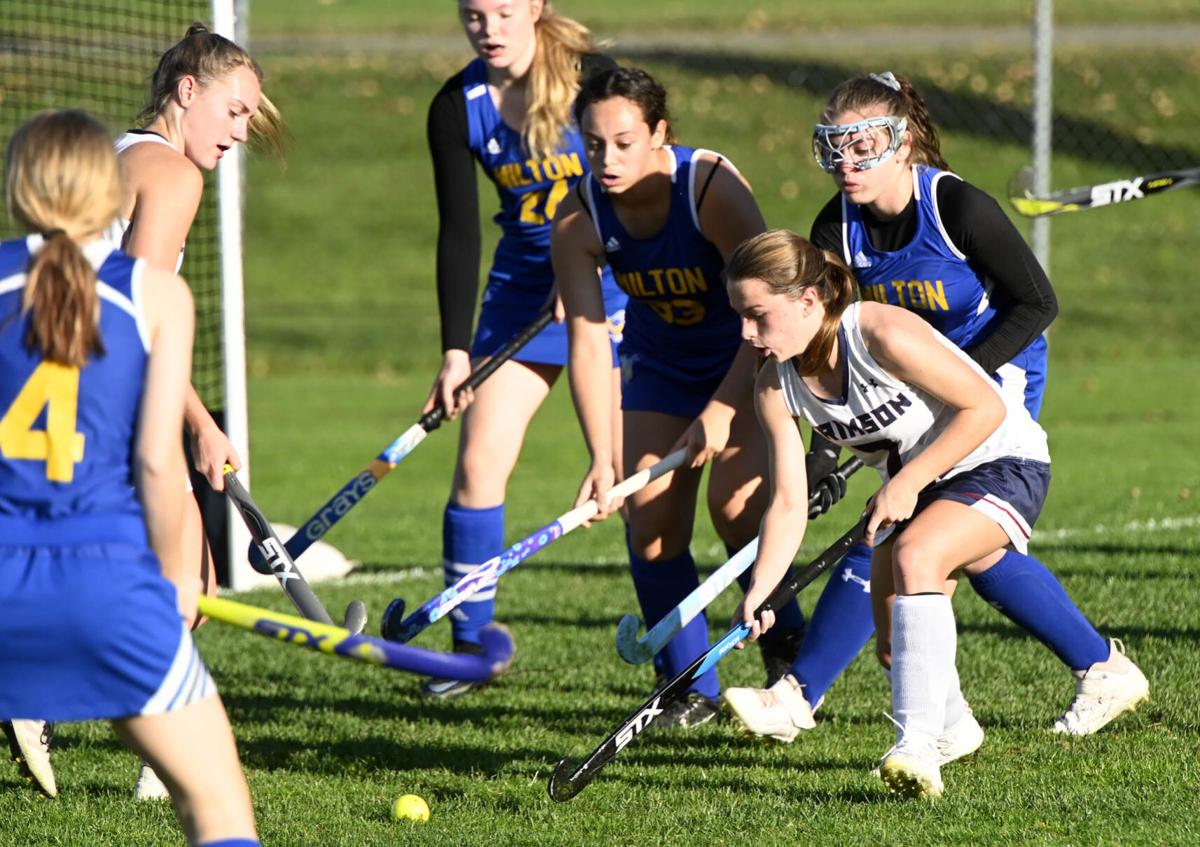 Spaulding sophomore Ruby Harrington attempts to get a shot on goal during the first half of the Crimson Tide’s game against Milton on Tuesday. 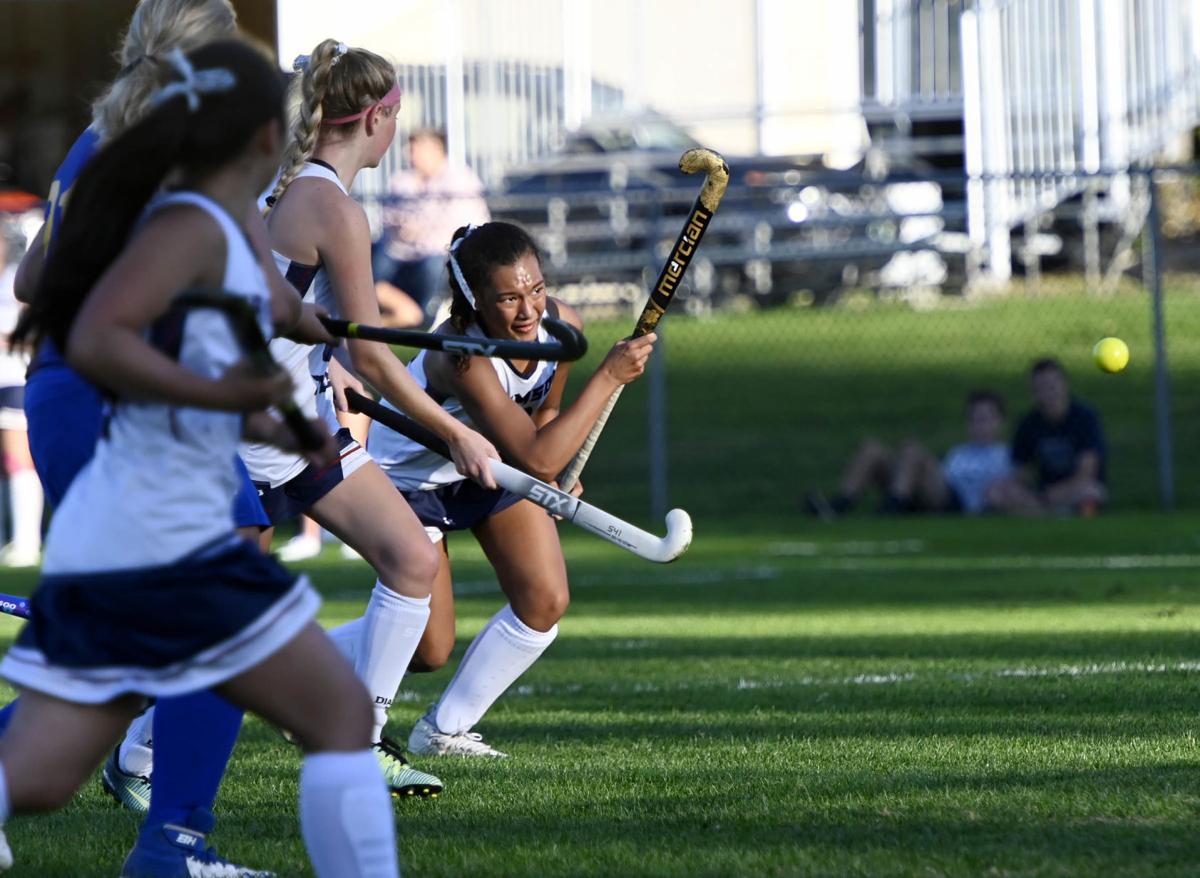 Spaulding sophomore Corrina Moulton takes a shot on goal during the second half of the Crimson Tide's game against Milton on Tuesday. 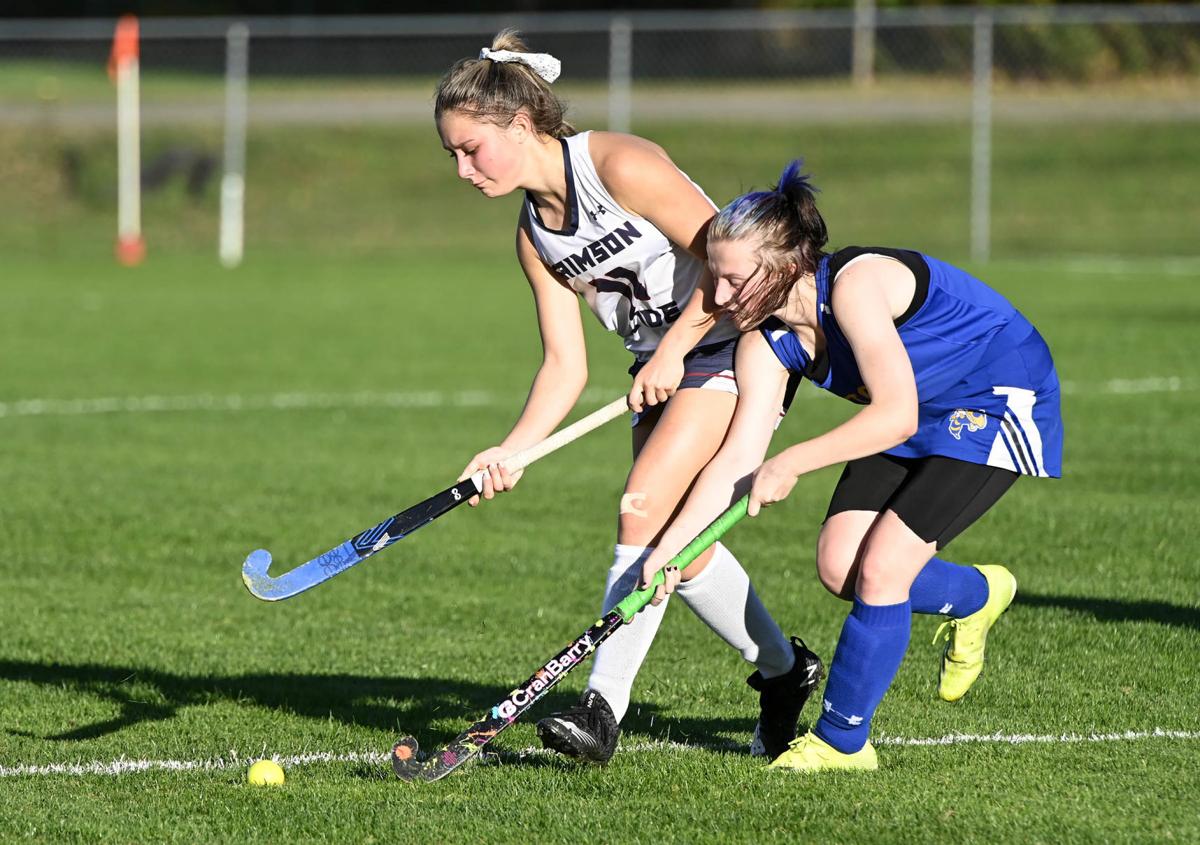 Spaulding sophomore Addison Pinard and Milton sophomore Kailey Hedman battle for the ball during the first half of their game Tuesday.

Spaulding sophomore Ruby Harrington attempts to get a shot on goal during the first half of the Crimson Tide’s game against Milton on Tuesday.

Spaulding sophomore Corrina Moulton takes a shot on goal during the second half of the Crimson Tide's game against Milton on Tuesday.

Spaulding sophomore Addison Pinard and Milton sophomore Kailey Hedman battle for the ball during the first half of their game Tuesday.

“These athletes continue to amaze me with their abilities,” Spaulding coach Tabitha Lord said. “Every one of them showed up and played a game of field hockey as a team.”

MONTPELIER — The Solons held their own despite playing with just a handful of subs during Tuesday’s loss to the Hilltoppers.

“We have a very small team to begin with, and later in the season you have injuries and it’s always kind of a shuffle,” first-year MHS coach Sydonia Axis said. “But everyone has been showing up and bringing everything they have.”

Goalie Maddie Hurlbert made one save for the Hilltoppers. Izzy Jackson stopped four shots for the Solons while making her debut in front of the cage.

“Izzy Jackson played goalie today for the first time ever and did incredible,” Axis said. “We were cycling through defense and everyone shifted positions. So everyone played new positions and tried out different spots and they all did really amazing. Ella (Averbeck) and Amelia (Currier) do play defense (most games). And we had Ava (Thurston) and Iris (White), who are freshmen and normally mids. But they stepped up for defense.”

Clara Andre opened the scoring in the second quarter and her team led 1-0 entering halftime. Montpelier nearly held the visitors scoreless in the third quarter, but Madigan Maurer broke through to double the lead with 1:06 on the clock. Hannah Angell capped the scoring with 5:26 left in the fourth quarter.

“Eli (Muller) is our center mid and he’s always incredible,” Axis said. “Hannah (Grasso) is our center forward, and they’re our two captains. And the two of them both really brought it today. All the rest of the forwards and mids shuffled around and all had incredible passes and stops.”

The Solons opened the season with a 4-1 victory over Missisquioi and also earned a 2-1 win at Milton and a 4-1 victory against Harwood. Montpelier (3-5) will return to action Thursday with a 4 p.m. game at North Country. St. Johnsbury (7-4) will host North Country at 2 p.m. Saturday.

EAST MONTPELIER — Goalie Kiki Hayward closed out her seventh shutout of the season Tuesday and Caitlyn Fielder tucked away a pair of clutch goals on corners in the fourth quarter.

“Caitlyn is the Isaiah Thomas of our team,” U-32 coach Dillon Burns said. “If you are playing down late and you get her the ball, she always brings you out of the hole.”

“Harwood’s defense played really well today,” Burns said. “They took a lot of shots from us and kept us out most of the game.”

“We were able to rotate a lot of guys through and give some guys some rest,” Montpelier coach Eric Bagley said. “We’re still missing Noah (Samuelsen) and Sina (Fallahi). So it’s good to get another win without those guys, who are obviously very important to us.”

Ben Collier opened the scoring on a Tyler Thomas assist. Ronnie Riby-Williams doubled the lead on an Aidan Quinn assist, giving MHS a 2-0 advantage heading into halftime. Clayton Foster tallied his first varsity goal in the second half, thanks to a well-placed service from Brooks Duprey.

“Clayton has done a good job this year and he’s come close to scoring on a couple of corner kicks,” Bagley said. “He has a habit of finding good spaces on our corner kicks and he’s a magnet to the ball.”

Quinn tallied the final goal on an assist from JV call-up Josiah Phillips. Goalie Hayden Cheever made 12 saves for Lamoille, while Brio Levitt recorded his seventh shutout for Montpelier (10-1). The Solons will host Paine Mountain at 6 p.m. Friday.

“We’re going one game at a time,” Bagley said. “We came off a pretty busy stretch of five games in two weeks, so the season is a grind at times with all these games so close together. We’re trying to stay healthy and not develop any bad habits. And hopefully get ready for playoffs.”

Xavier Brookens gave HU a 1-0 lead in the 15th minute on a feed from Shullenberger. Leif Brouillette made it 2-0 in the 24th minute, with Shullenberger notching another assist.

Shullenberger stretched the lead to 3-0 in the 44th minute after capitalizing on an Adam Porterfield assist. Brookens set up Shullenberger in the 61st minute for a 4-0 advantage.

A penalty kick from Jack Birmingham gave HU a 5-0 lead in the 67th minute. Harwood closed out the scoring on a rebound shot by Brouillette in the 60th minute and a Shullenberger goal on a Zach Smith in the 73rd minute. Shullenberger now has 18 goals and six assists this season.

“We tried to be really focused on simple play all game,” Highlanders coach Joe Yalicki said. “We had a sequence where we threw the ball in near our own corner and completed eight passes, 10-15 yards each, involving nine players and got into their box at the end. We also played the long ball at dangerous times and kept possession after a lot. To me, both of those styles make for good soccer. We need to find the ability to play both ways and do both really well. Our second half was a lot better than the first and we worked the ball around more. Keeping the clean sheet was a must today and we had great decision-making in the midfield.”

THETFORD — A trio of unanswered goals in the first half allowed the visitors to spoil the Panthers’ Senior Game on Tuesday.

A second-chance opportunity by Travis Robillaird gave Paine Mountain a 1-0 lead in the 8th minute. An 18-yard left-footed shot by Logan Amell into the corner of the net doubled the lead four minutes later.

Italian exchange student Pietro Cie scored on a Caiden Crawford-Stempel assist for a 3-0 lead. Elliot James scored for Thetford at the end of the half before both teams were held scoreless after the break.

Thetford keeper Mack Briglin made five saves, while Ethan Miller stopped one shot in the victory.

“Oxbow played tough,” Cabot-Twinfield coach Peter Stratman said. “They held us to two goals in the first half and played quality team defense. We created a couple of exciting chances early, but then our pace fell a bit flat for much of the match. The boys picked it up late in the game and manufactured some quality goals. It was nice to get another team win.”

Twinfield (7-2) will travel to play Blue Mountain at 4 p.m. Thursday.