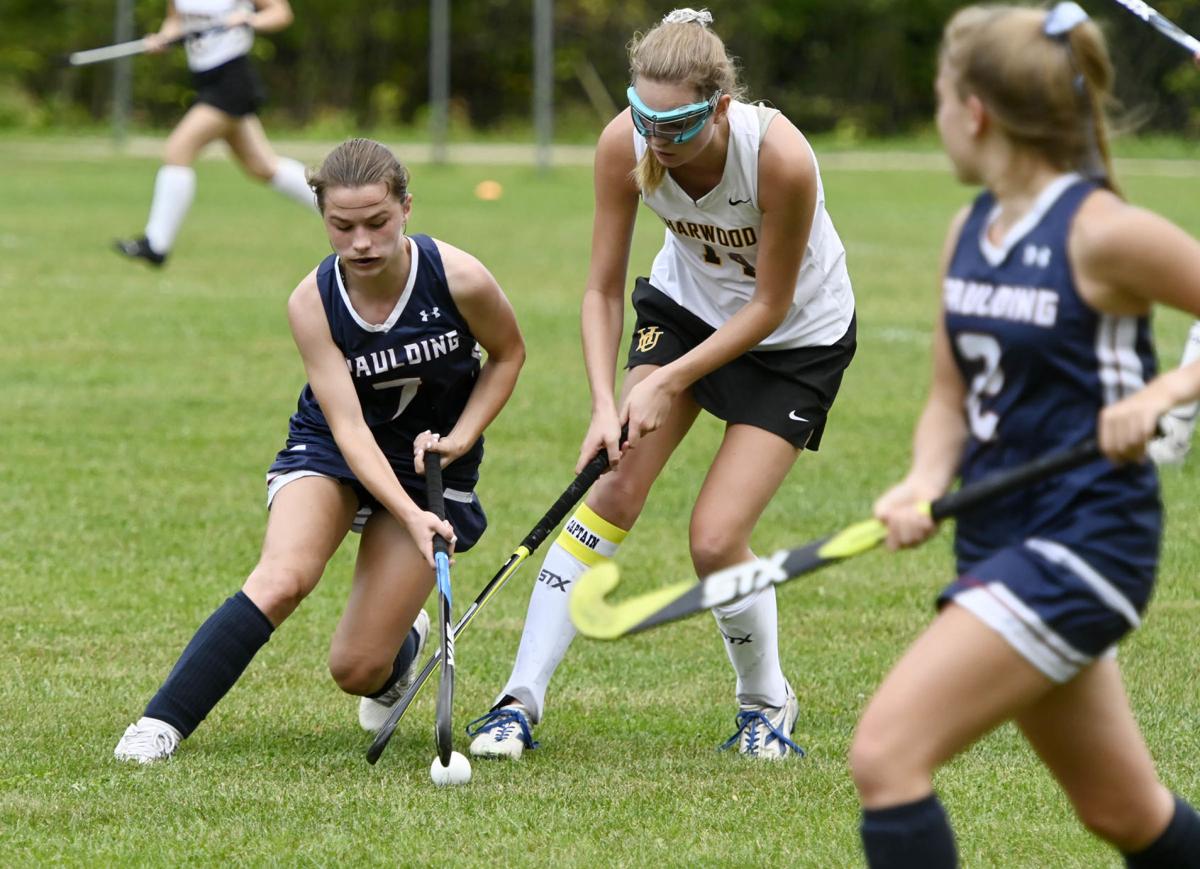 Spaulding’s Ruby Harrington controls the ball as Harwood’s Merry Smith defends during the second half of their field hockey game Tuesday. 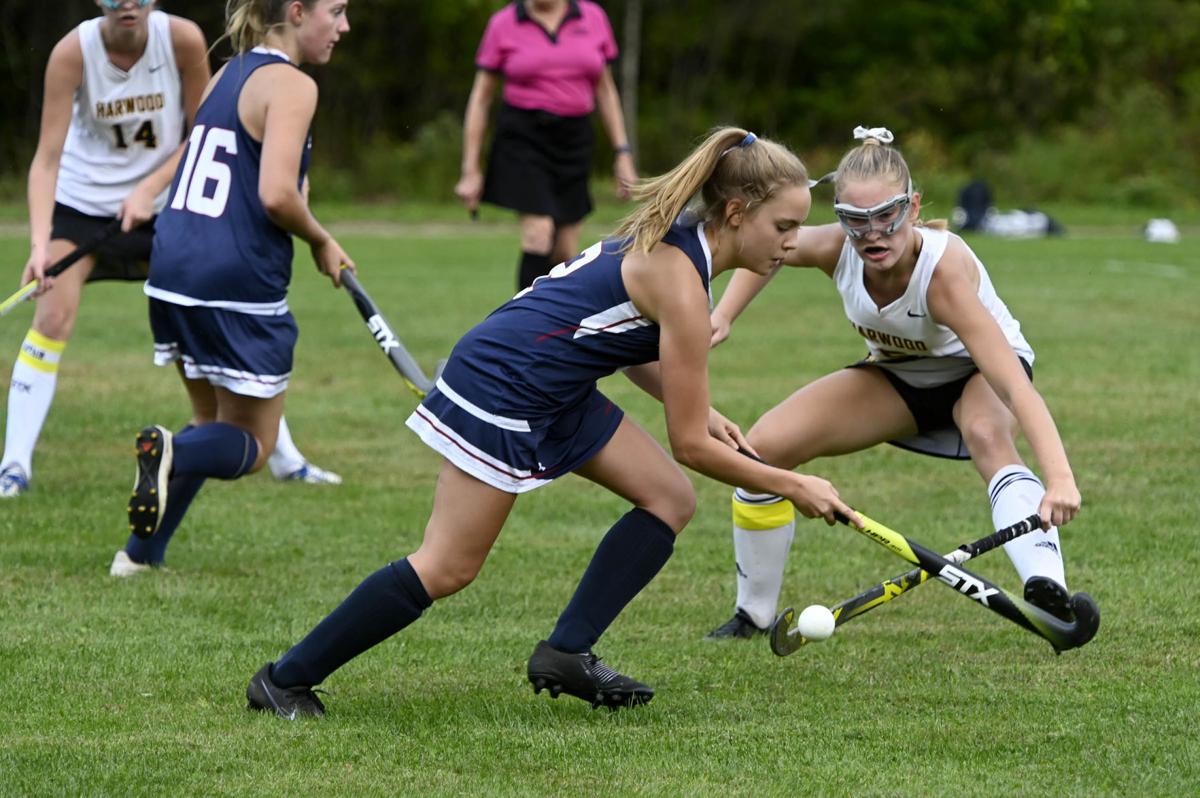 Spaulding’s Ashley Morrison advances the ball as Harwood’s Maggie Aiken defends during the second half of their field hockey game Tuesday. 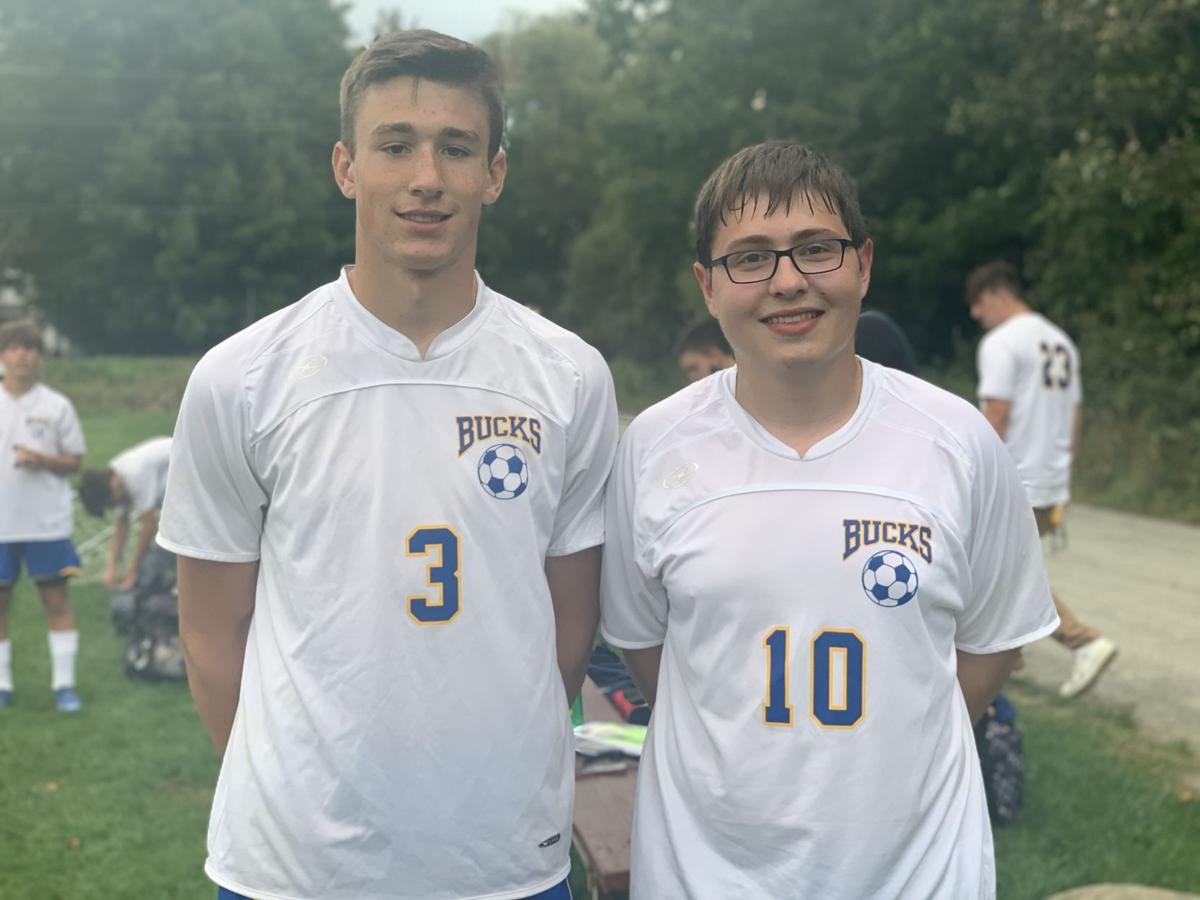 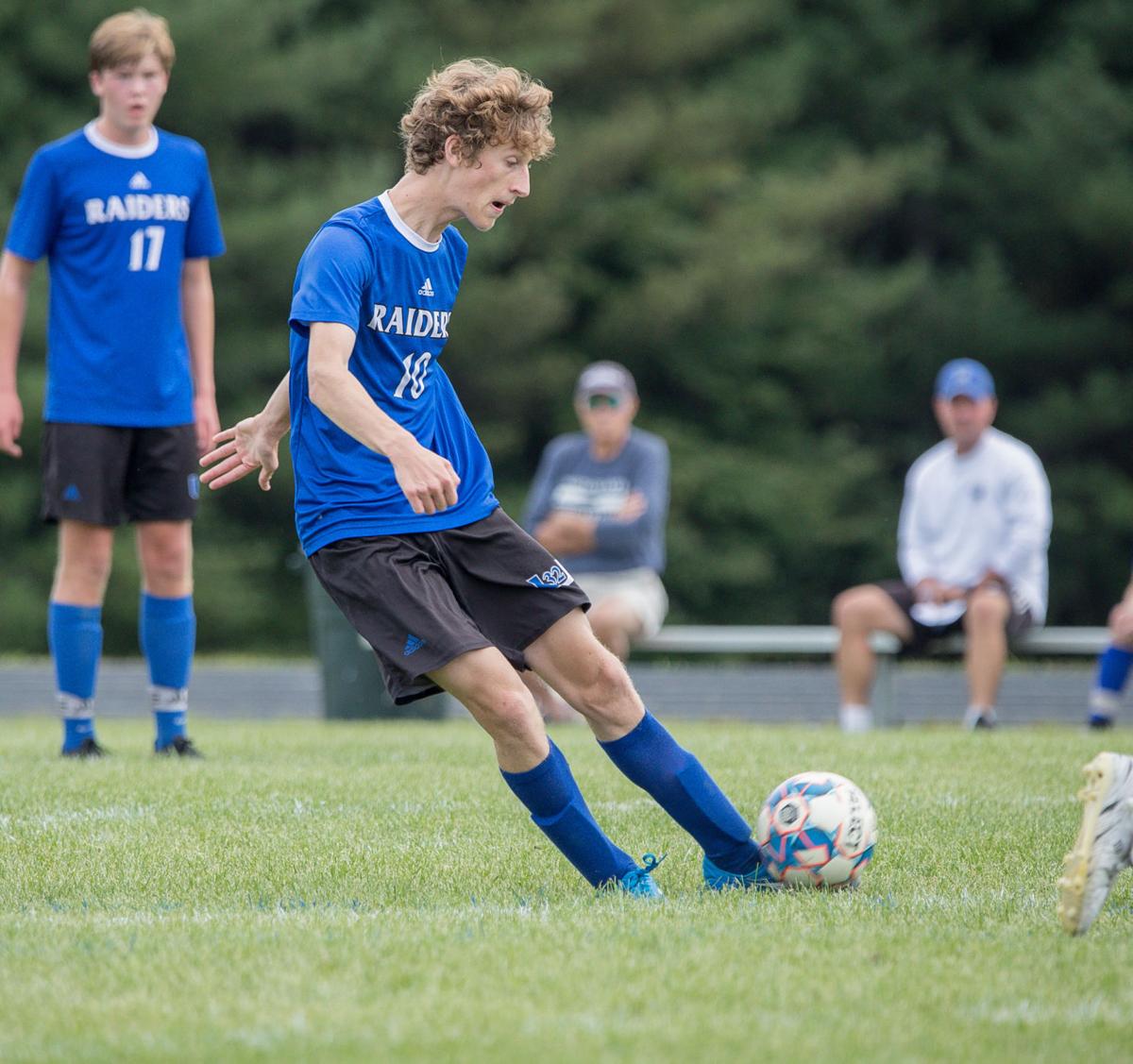 Spaulding’s Ruby Harrington controls the ball as Harwood’s Merry Smith defends during the second half of their field hockey game Tuesday.

Spaulding’s Ashley Morrison advances the ball as Harwood’s Maggie Aiken defends during the second half of their field hockey game Tuesday.

DUXBURY — Spaulding outshot Harwood 14-0 Tuesday but needed a pair of goals in the final seven minutes to secure a 2-0 field hockey victory.

The Crimson Tide held a massive advantage in scoring chances and penalty corners for the first three quarters and still didn’t have anything to show for their efforts. The non-stop pressure finally resulted in a goal when Bella Bevins redirected a Zoe Tewksbury cross into the back of the cage. Bevins scored again on a Hannah King assist to cap the scoring with 47 seconds left to play. Goalie Abigail Geno wrapped up the shutout after easily clearing a handful of Harwood advances into the circle.

Goalie Kate Wilkesman made 12 saves for Harwood, while teammate Anna Kudriavetz was a standout in the field.

“Anna played defense and some midfield and was very aggressive and played smart,” Harwood coach Sophia Tretiak said. “We had a much stronger outing as a team this afternoon.”

Harwood will host Montpelier at 4 p.m. Thursday. Spaulding will travel to play U-32 at 3 p.m. Saturday.

Ribolini (there goals) and Alaina Beauregard (two goals, two assists) showed off their polished finishing skills inside the circle. Fielder set up both of Alaina Beauregard’s goals, while teammate Natalie Beauregard assisted Ribolini’s final goal in the fourth quarter.

Goalie Kaelyn Hayward stopped three shots for U-32. Emma Philbrook made 20 saves for Milton. The Raiders will host Spaulding at 3 p.m. Saturday.

MORRISVILLE — Tuesday’s clash between reigning champs was decided by a penalty-kick goal from Ben Collier in the 31st minute.

“We had a corner kick, we won the initial ball and their goalie made a save,” MHS coach Eric Bagley said. “The rebound was going toward the goal and one of their payers blocked it with their hand. So it was a penalty kick and a red card.”

Collier instinctively stepped up to the spot and delivered under pressure. He resisted the urge to overpower the ball, lining a low shot to the back corner to beat Wolves keeper Chandler Follensbee (21 saves)

“Ben made a couple (penalty kicks) last year and he had one in the first round of playoffs,” Bagley said. “And he had a few the year before too. …I leave it up to the guys on the field. Ben is our free-kick taker, so he just grabs the ball and step up and hits it.”

Goalie Brio Levitt recorded two saves to earn his second straight shutout for the Solons. Will Bruzzese took charge defensively for the D-II Solons to neutralize the defending D-III champs.

“Will had a great game,” Bagley said. “Peoples pushed Oliver Nigro forward in the second half and Will did a great job of keeping him in check and making sure he wasn’t able to have any good looks on goal. Brio had one save on a free kick that went right to him. But especially after the red card, they didn’t have many chances. The ball was mostly played in the midfield.”

“Peoples always plays hard and they’re going to be tough, no matter what,” Bagley said. “They played a different system than they have in the past, which caused us some problems in the first half before the red card. They played a 3-4-3, which you really don’t see from anybody in high school soccer. And it was a nice challenge for us.”

“Peoples has good midfielders and they’re a really tough team to play against, especially when they’re playing at home,” Bagley said. “For the most part, we had a few good moments throughout the game. We obviously had quite a few shots. Sina (Fallahi) and Felix (Seiler) did a great job of putting their back line under a lot of pressure. But overall is was not our greatest performance. It was pretty sloppy and we gave some unnecessary balls away. We’ll have to be tougher when the next games roll in.”

Lothe scored on a Cameron Thayer assist in the 20th minute before Owen Schulz made it 2-0 in the 26th minute on a feed from Rosalbo. Spaulding answered in the 36th minute to make it a 2-1 match entering halftime.

The Tide pulled even in the 44th minute before Lothe scored on a Sam Mason assist a minute later. Reagan Papp extended the lead to 4-2 in the 69th minute, only to watch Spaulding score in the 70th. Lothe set up Rosalbo in the 75th minute and Rosalbo found the back of the net again in the 79th.

“It was definitely a back-and-forth game, with both teams having their fair share of opportunities,” Randolph coach Chris Rivet said. “It feels like finally we were able to generate the type of offense that we thought we are capable of. We were able to get better control of the ball in the offensive end than in previous games, which allowed us to have more opportunities. Despite a couple lapses in the back leading to Spaulding goals, I thought we were generally pretty solid. There are still things we need to take from the game to learn and improve on. But overall I’m glad to have a good performance and a good win.”

NEWPORT — Jordan Shullenberger scored in the 75th minute and assisted Jack Birmingham with less than a minute to play Tuesday. Goalie Liam Combs made eight saves for HU, which outshot North Country 10-4.

“Overall, I have a lot of respect for the way North Country plays,” Harwood coach Joe Yalicki said. “We had to earn that result. It’s nice to win a tight game and I was really happy with the win.”

North Country falls to 1-2, while Harwood improves to 2-1. The Highlanders will host Lamoille at 4:30 p.m. Friday.

HARDWICK — Finn O’Donnell got things started early for the Raiders and Shiloh Weiss slammed the door on the Wildcats’ comeback attempt in the second half during Tuesday’s victory.

O’Donnell gave U-32 a 1-0 cushion by firing a shot past Hazen keeper Tyler Rivard (10 saves) in the 1st minute. O’Donnell buried a penalty kick in the 26th minute, giving his team a 2-0 lead entering halftime.

The Wildcats made it a one-goal game again in the 44th minute when Lincoln Michaud scored off a free kick. Weiss answered 10 minutes later with the final goal of the match. Goalie AJ Moore made three saves for the 3-1 Raiders, who will host Thetford at 5 p.m. Saturday for a Homecoming match.

CRAFTSBURY — Seven players found the back of the net Tuesday for the Bucks, who rallied from a two-goal deficit to earn their first victory of the season.

A pair of early goals by Chargers junior Cole VanWinkle gave his team a 2-0 lead. The Bucks nearly conceded another goal, but shots by VanWinkle and eighth-grader Owen Skorstad hit the crossbar. Blue Mountain caught another break midway through the first half when VanWinkle blasted a breakaway attempt a few inches wide of the right post.

A 30-yard free kick by Blue Mountain’s John Dennis sailed into the upper-right corner of the goal late in the first half, closing the gap to 2-1 entering the break.

Evan Dennis and Jacob Dube scored two goals apiece for the Bucks after halftime to open the floodgates in a flash. The Bucks kept the pressure on offensively, resulting in additional goals by Kason Blood, Cameron Roy, Gavin Longmoore and Kristofer Fennimore. Craftsbury starting keeper Jas Zendik made nine saves before teammate Dylan Washer (four saves) finished up in goal.

HYDE PARK — The Highlanders were unstoppable for 80 minutes while waltzing past the Lances on Tuesday.

A through ball from Scout Vitko set up Ravelin for a clinical finish to the bottom-right corner for a 1-0 lead in the 10th minute. Jernigan fired home a rebound shot after an initial attempt by Tanum Nelson in the 20th minute to make it 2-0.

Tanum Nelson headed home a follow-up bid in the 22nd minute after Lilley fired a shot off the crossbar. Harwood pulled head 4-0 in the 34th minute when Tanum Nelson assisted Lilley. Tanum Nelson set up Cattanach for a delicate finish that gave HU a 5-0 cushion entering halftime.

Nelson collected a pass from Ravelin in the 47th minute and showed off her power for a 6-0 advantage. Quinn Nelson capitalized on an assist from her sister for a 7-0 lead in the 49th minute. Louisa Thomsen’s assist to Ravelin set up the final goal in the 57th minute.

NORTHFIELD — The defending Division III champs scored three times in the second half to walk away on top after Tuesday’s shootout.

“Stowe played really well in the second half,” Paine Mountain coach Stephen LaRock said. “Their skillful midfielders came to life in the second half and controlled much of the play. We found ourselves under a lot of pressure and we worked hard to win the ball and clear it away. But the quality of Stowe’s attack was too much to handle at times.”

“I was happy to see the effort and energy the team brought to today’s match,” LaRock said. “They never gave up and endured some tough moments. It’s never fun when you watch one-goal leads slip away. We held one-goal leads twice, so that was tough on the team. But Stowe made solid adjustments and were just a little quicker and more decisive with their possession. There was a lot of good, quality soccer. And that’s what you’ll see from all the Capital League teams this season.”