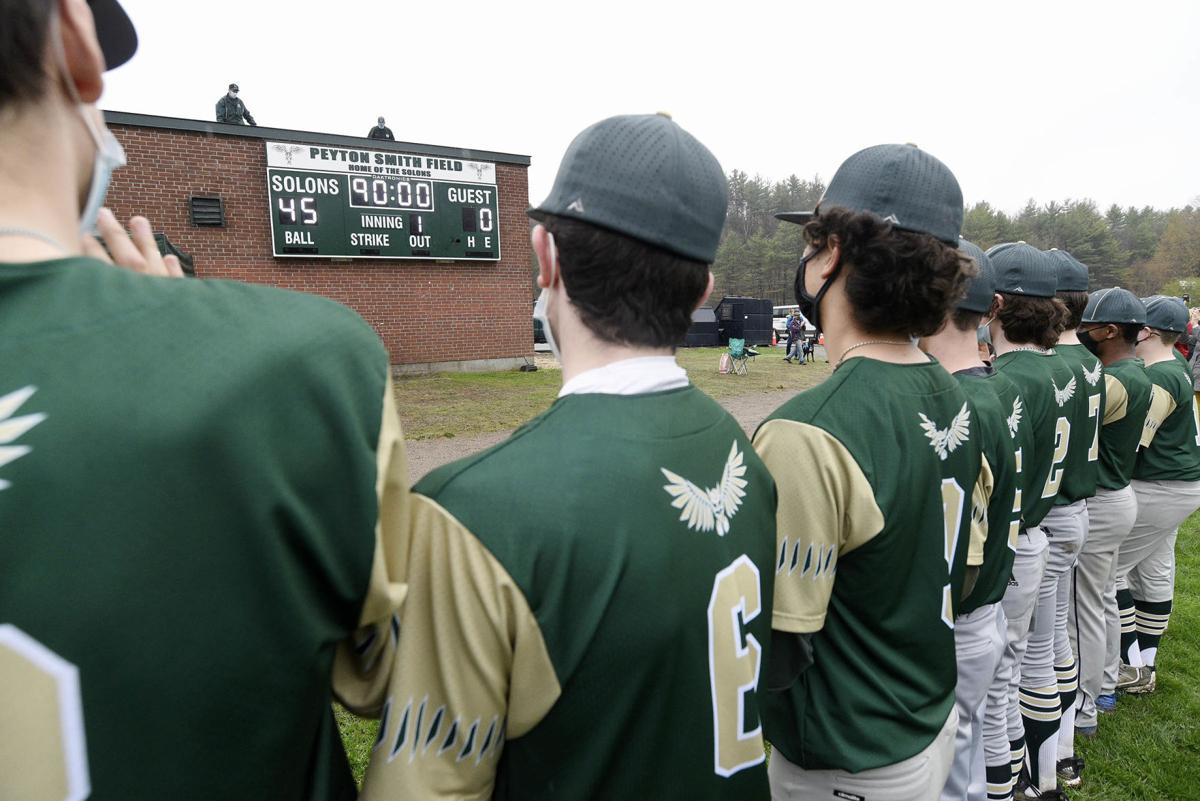 Montpelier High School baseball team members applaud after a new scoreboard dedicating the field to teammate Peyton Smith was unveiled Thursday at the school. Smith was a senior last year on the baseball team and passed away from cancer last October. The school also presented his parents and brother with two of Smith’s framed jerseys. 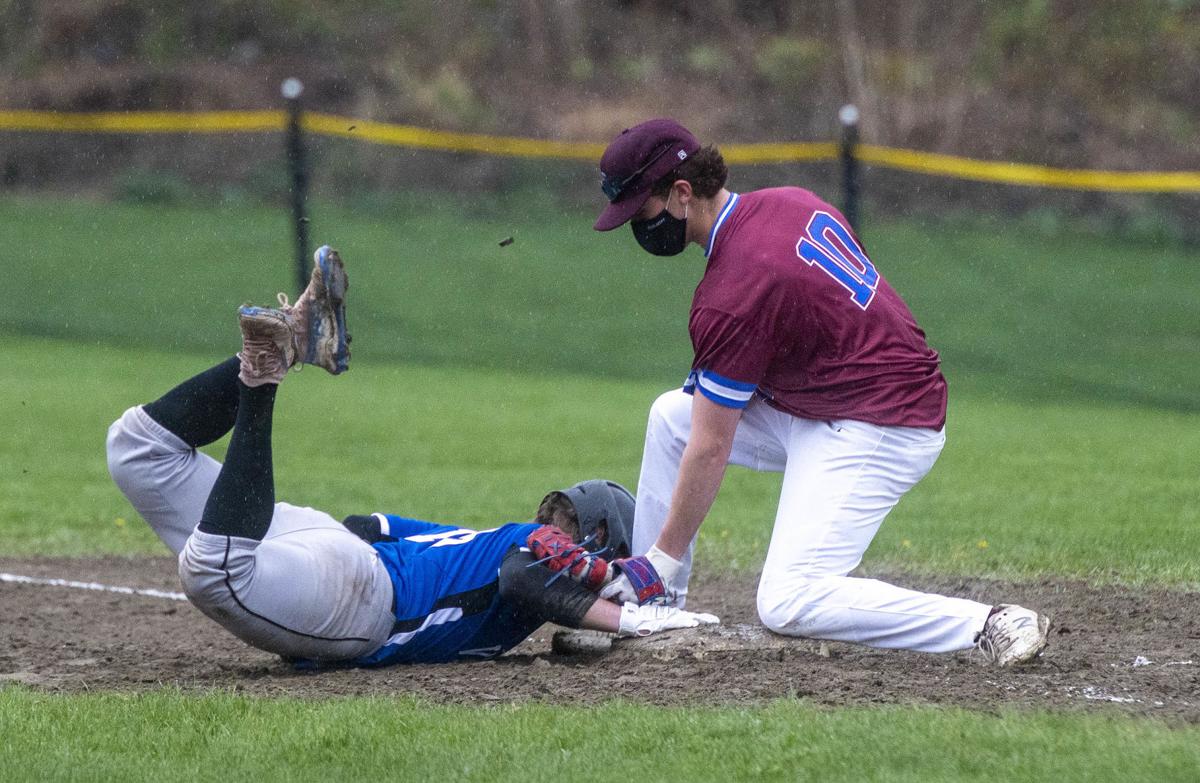 Spaulding sophomore Kieran McNamara applies the tag as Vergennes senior Tucker Stearns dives back to the bag at first base during their baseball game Thursday.

Montpelier High School baseball team members applaud after a new scoreboard dedicating the field to teammate Peyton Smith was unveiled Thursday at the school. Smith was a senior last year on the baseball team and passed away from cancer last October. The school also presented his parents and brother with two of Smith’s framed jerseys.

Spaulding sophomore Kieran McNamara applies the tag as Vergennes senior Tucker Stearns dives back to the bag at first base during their baseball game Thursday.

MONTPELIER — Keegan Smith followed up an emotional pre-game ceremony Thursday by leading the Montpelier baseball team to an inspirational victory.

Smith’s older brother, Peyton, died last October at the age of 18 following a long battle with pediatric bone cancer. Prior to the Solons’ 13-5 victory over Oxbow, Montpelier held a ceremony paying tribute to Peyton and dedicating the field and scoreboard in his honor. Athletic director Matt Link presented Peyton’s No. 45 jersey to the Smith family in remembrance of what he meant to MHS baseball.

The game began in spite of some rain, and Keegan Smith made contact on the first pitch to ignite a big first inning.

“Keegan had been working super hard in practice,” MHS coach Logan Cooke said. “He’s a freshman and he’d been putting together good at-bats in our first few games. He went 2-for-3 with a hit on the first pitch of the game, which was really special considering that we had just come from his brother’s dedication. Sometimes the universe does magical things. And there was something super special going on there. It was a solid line drive and he was able to score. He’s a utility guy for us. He’s a lefty and he’s been getting reps at first base and outfield. And he made a diving catch on a sinking line drive today in the third inning.”

Keegan Smith added another clutch hit in a four-run fourth inning, helping MHS close out the victory during a game that was called after five innings due to challenging conditions. Both teams scored two runs in the first frame before Montpelier pulled ahead with a seven-run second inning.

“We got the W in the rain,” Cooke said. “It was on and off. It had its spurts where it would pick up and then it would let off. And then right as the game finished, it really started to come down.”

Nate Groff’s three-run double in the second inning allowed the Solons to pull ahead and stay ahead against the perennial Division III power.

“Nate had the biggest hit of the day,” Cooke said. “The bases were loaded and the game could have gone either way at that point. And he hit a double down the line and it cleared the bases for us.”

“Andrew had a different routine and that threw him off a little, but he was able to find it eventually,” Cooke said. “He’s got a good mix of a couple pitches. He’s been working on being able to dial his velocity up and he’s finding that starting-pitcher groove. Even late in counts, he can dial it up and step it up a lot. Right now, young kids are stepping up on the mound for us. Andrew worked through some bad weather and did enough to give us a quality outing. And we have a lot of guys who still haven’t seen a lot of time on the mound. We have a lot more depth than people have seen and that’s going be really important the rest of the season.”

“We ask a lot of these guys,” Cooke said. “They’re getting reps at multiple positions and expected to learn it. We’re still trying to find out where everyone fits. And we’re trying to use our bats to carry us in these games.”

Vergennes scored three runs in the first inning, thanks to RBIs by Jarret Muzzy, Tucker Stearns and Barret Barrows. Spaulding grabbed the lead in the bottom of the frame. Zach Stabell and Kieran McNamara delivered doubles before Danny Kiniry and Zack Wilson added singles.

Spaulding added six more runs in the fifth inning. Singles by McNamara (3-for-3, four stolen bases) and Kiniry got things started before Cole McAllister reached base on a walk. An error on a ball put in play by Dylan Blachand combined with a double by Chase gave the Tide lots of momentum.

Trevor Arsenault pitched the final inning for Spaulding, which recorded 14 stolen bases as a team. Muzzy took the loss for Vergennes (0-4).

Spaulding (3-0) will travel to play Mount Abraham for a doubleheader beginning at 11 a.m. Saturday.

BARRE — The Commodores thrived in challenging conditions during Thursday’s high-scoring shootout against the Crimson Tide.

“We were supposed to be home but our field wasn’t in good shape,” Spaulding coach Tara Simpson said.

EAST MONTPELIER — It took awhile before the Highlanders pulled away Thursday.

But when it rained, it poured.

The Highlanders held a 1-0 advantage after the first quarter before extending their lead to 4-0 entering halftime. An 8-0 cushion after three quarters allowed the defending Division II runners-up to fire away and spread the wealth in the final quarter.

“We started out slow, but our defense played so well,” Harwood coach Russ Beilke said. “The midfield was great too and it was a whole team thing.”

MONTPELIER — The Solons cut down on some careless mistakes Thursday and took care of business against the Wolves.

“Our goal was to improve our efficiency and have fewer turnovers than our last two games,” Montpelier coach Nolan Benoit said. “We did that in a huge way with only three turnovers in the first half and nine turnovers for the whole game. That’s less than one turnover per point scored. For context, in our first win of the season we averaged over four turnovers per point. That efficiency, our tight defense and reliance on our solid offensive systems helped us secure the win.”

Montpelier will travel to play BFA-Fairfax at 5:15 p.m. Tuesday.

Mary Fowler, Zhi Howes, Maggie Anderson and Mckenna Brochu gave St. Johnsbury a huge boost in singles action. Howes rallied to a 5-7, 6-4, 10-7 victory over Tovah Williams at the No. 3 position. Anderson won another tight match at No. 4 by holding off Caitlin Dodge-Prescott, 6-4, 6-4.

Ellie Coyle and Kay Connor didn’t lose any games at No. 1 doubles. Julia Chadderton and Maya Balcowski triumphed at the No. 2 spot.

Raiders senior Lucy Krokenberger prevailed at No. 1 singles. U-32 (1-1) will host North Country at 4 p.m. Monday.