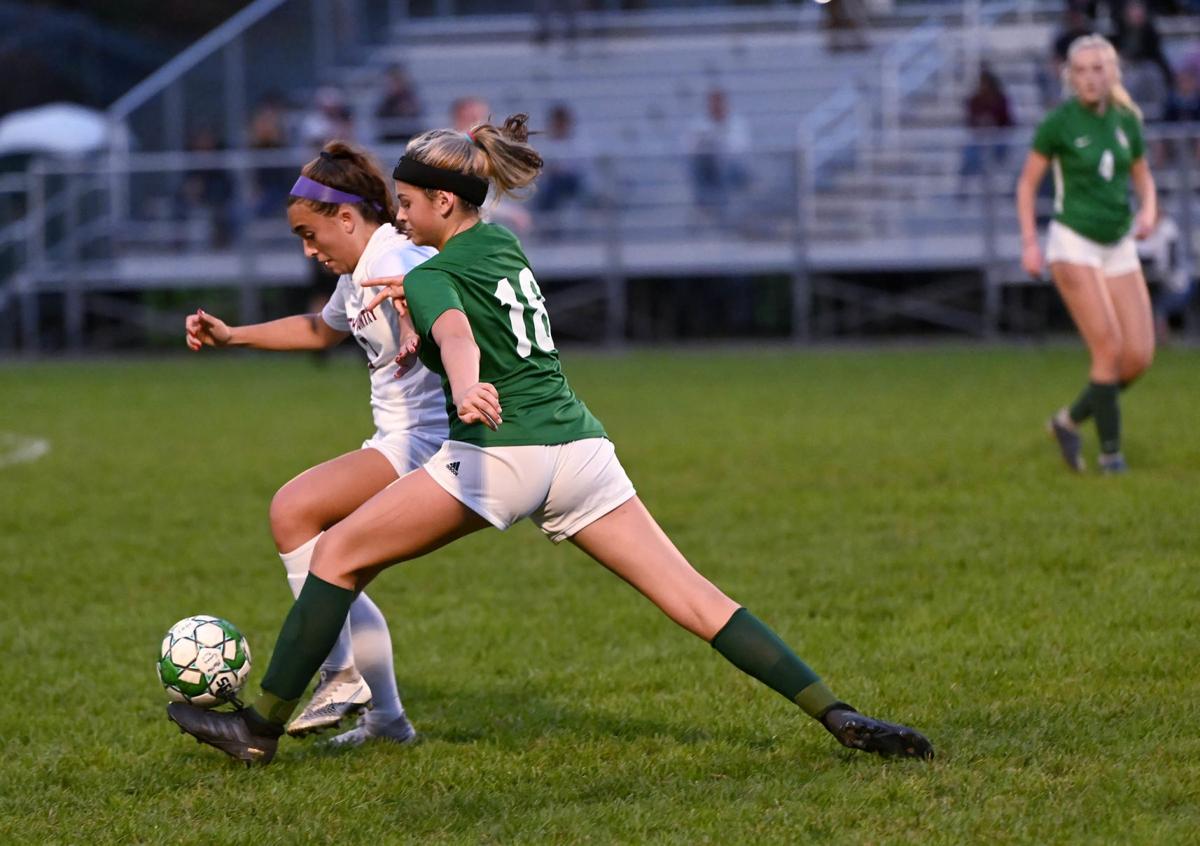 Montpelier sophomore Zoe Plummer-Tripp and North Country sophomore Charli Kellaway battle for the ball during the first half of their game Wednesday. 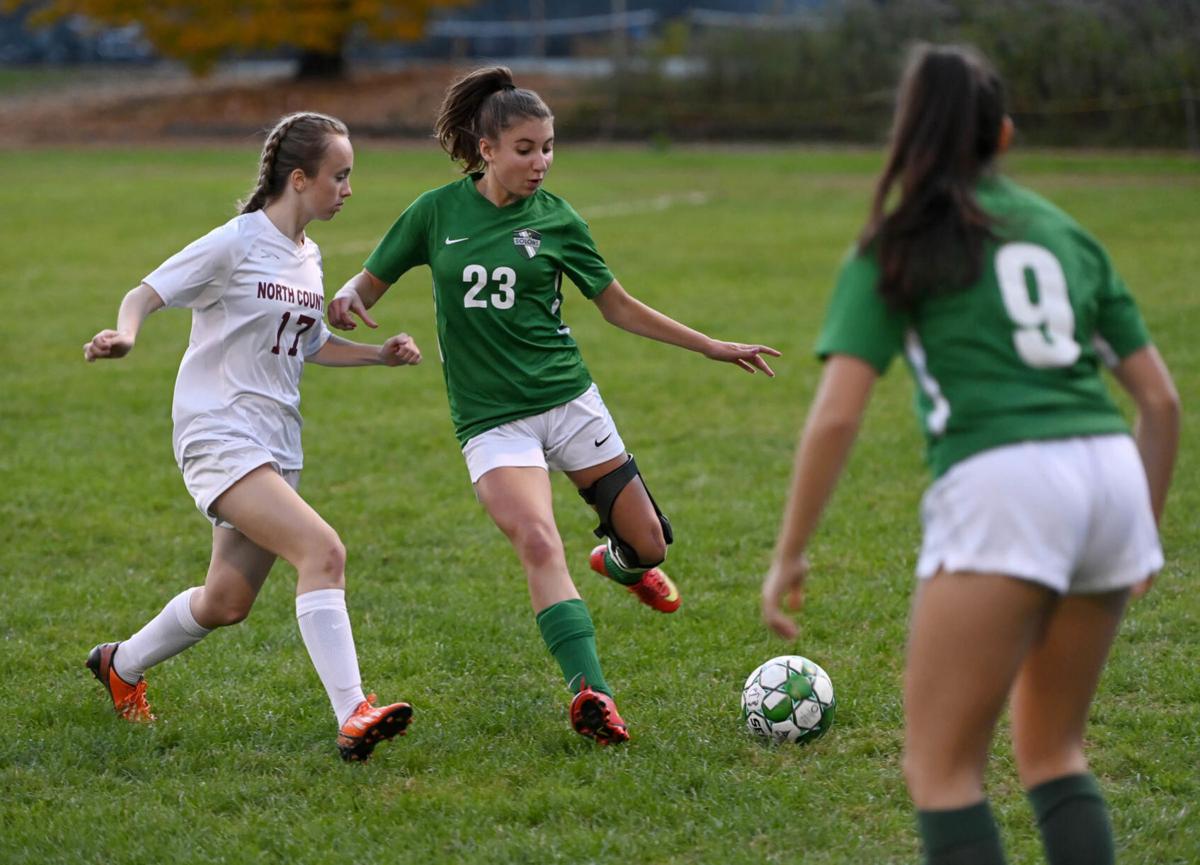 Montpelier junior Molly Hutton looks to clear the ball as North Country senior Tristin Colburn defends during the first half of their game Wednesday. 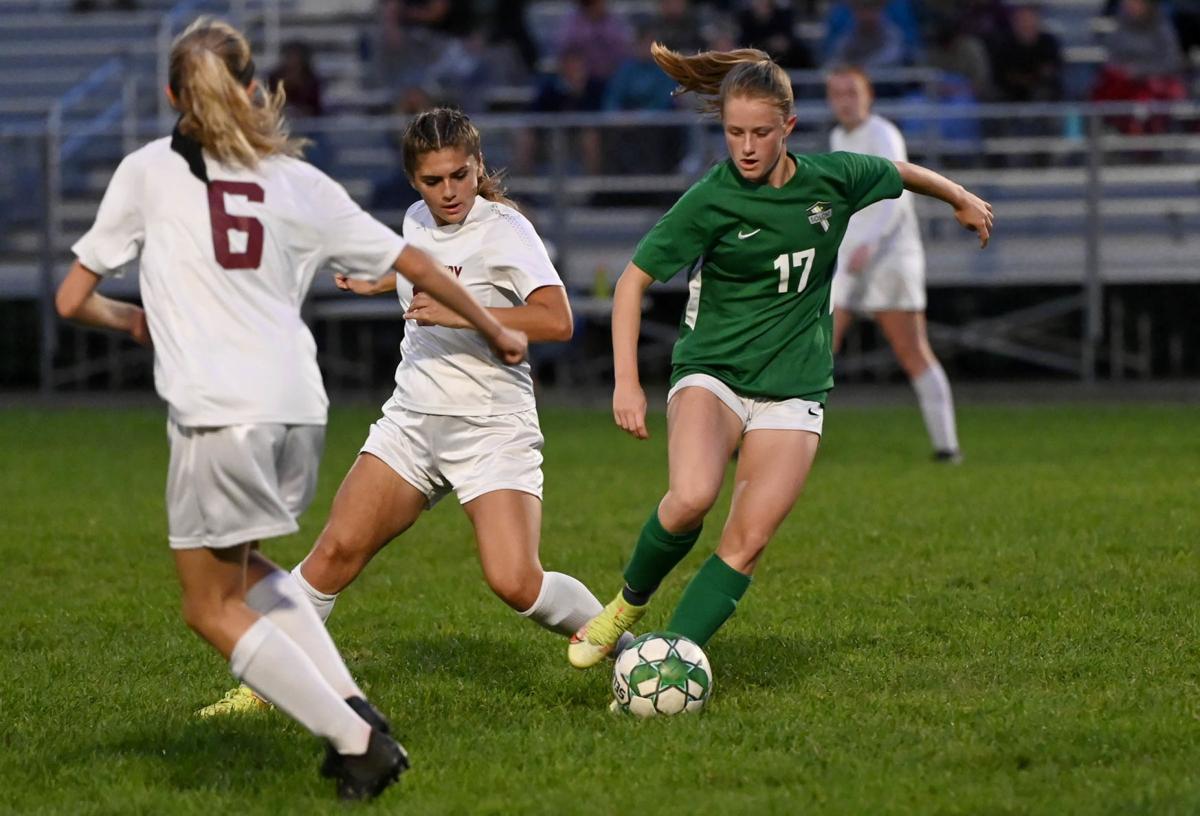 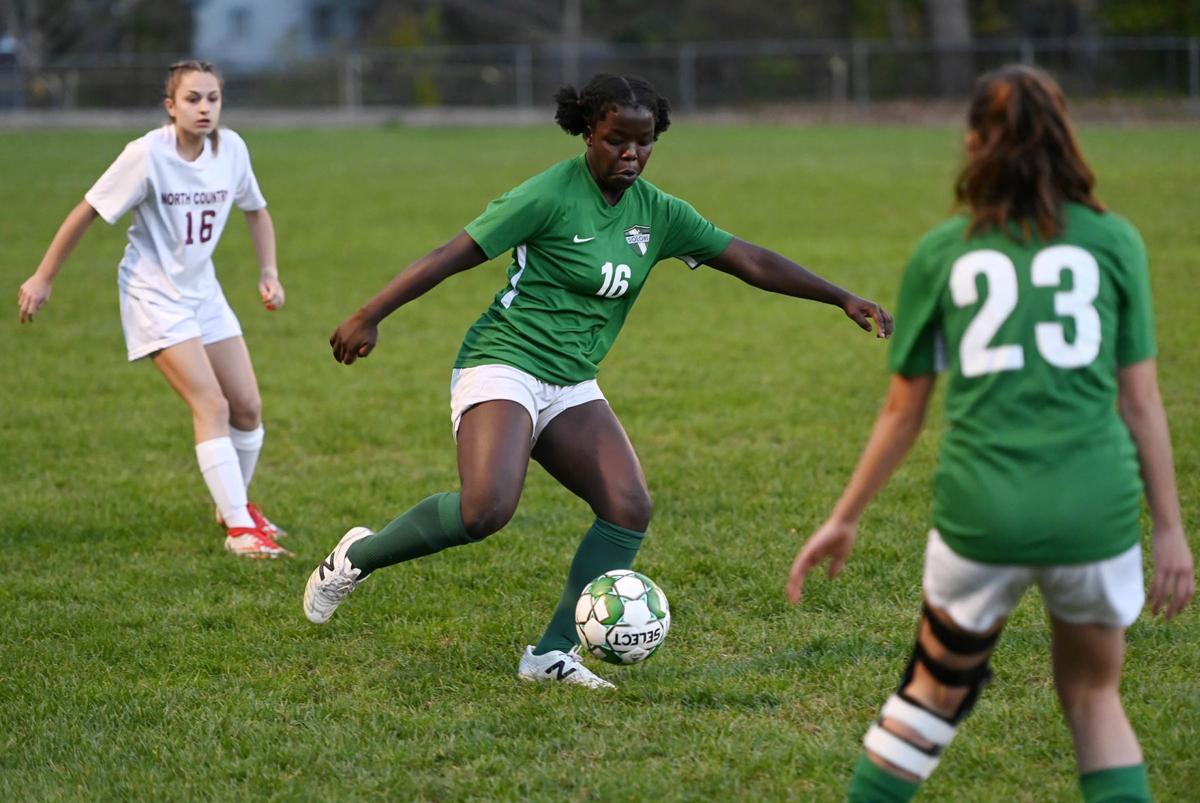 Montpelier sophomore Estherline Carlson looks to pass to a teammate as North Country junior Opal Beauchesne contains during the first half of their game Wednesday.

Montpelier sophomore Zoe Plummer-Tripp and North Country sophomore Charli Kellaway battle for the ball during the first half of their game Wednesday.

Montpelier junior Molly Hutton looks to clear the ball as North Country senior Tristin Colburn defends during the first half of their game Wednesday.

Montpelier sophomore Estherline Carlson looks to pass to a teammate as North Country junior Opal Beauchesne contains during the first half of their game Wednesday.

“We had more shots on goal — probably 10 or 12,” MHS coach Jay Geibel said. “We had a few chances in overtime and put a lot of pressure on them, so we felt we had the momentum.”

Solons keeper Sophia Flora made five saves in the shutout. She helped MHS (6-3-1) snap a two-game losing skid by recording the first clean sheet of her varsity career.

“North Country had one or two shots that just sailed over the bar and they were a little scary to watch,” Geibel said. “And there were a couple scrambles in the box on corner kicks and set pieces. This is (Flora’s) third game in goal and she looks a lot more confident than she did that first.”

The Falcons (9-2-1) were shut out for the second time this season and are winless in their least three matches. The Solons relied on a few key reserves to keep North Country in check.

“Zoe Colvin and Amelia Woodard are two players who came off the bench for us and had a huge impact in the center of the field,” Geibel said. “They both played substantial minutes and really stepped up in a competitive varsity game.”

North Country recorded its fifth shutout after making it a mission to limit shots by Montpelier’s Sienna Mills. The junior striker leads an MHS offense that’s scored 33 goals this fall.

“They were focussed on (Mills),” Geibel said. “Every time she touched the ball, their coach was yelling to contain. And our back line did a tremendous job of cleaning things up and not letting them get dangerous chances in behind. Grace Nostrant was in the center back spot, and she’s normally in the midfield. And she did a fantastic job of really dominating their attacking players.”

Nostrant and fellow central defender Emily Fuller were standouts along with outside backs Pilar Abele and Molly Hutton. Plummer-Tripp was also a powerhouse in the defensive third of the field.

“We were on our heels momentarily in the beginning of both halves and they had a little bit of momentum,” Geibel said. “They came out firing and they came out running hard and putting a lot of pressure on us. And in both halves we were able to lean back on our possession and slow down their movements. …We had two people in new starting roles in the back and they did a tremendous job.”

The Falcons opened the season with nine straight victories, including a 2-0 win over Milton and a 3-1 victory over BFA-St. Albans. The Falcons’ streak ended last week with a 4-2 loss to Harwood. The Solons entered Wednesday’s match on the heels of a 3-1 loss at Stowe and 4-1 defeat at Harwood.

“We knew we were going into the meat of our schedule,’” Geibel said. “At the end of the game tonight, they were saying, ‘That’s a D-I team.’ They played Harwood to a real tight game and they have a pretty good record. The momentum we had felt good. We felt like the stronger team and the more dangerous team for a fair bit of the match. …We’re a little beat up. But for the way the season is going, we stayed positive. Today wasn’t a ‘W’. But it was a positive. We feel good coming out of these three games and being able to face the rest of our schedule.”

DUXBURY — Tanum Nelson pushed her season total to 29 goals and was one of six scorers Wednesday.

Harwood (10-0-1) will travel to play Paine Mountain at 7 p.m. Saturday under the lights at Norwich University.

“We had some strong defensive performances from Avery Knauss, Nora Wilcox, Greta Little — and splitting time centrally was Tovah Williams and Victoria Krismejer,” U-32 coach Steve Towne. “Our midfield also did a great job winning balls in the air and keeping possession. Lauren Towne played a central role, along with Tegan O’Donnell, Alyssa Frazier, Clara Wilson and Meredith Wilcox.”

DANVILLE — Eva Hebert scored off a throw-in from Ruby Wilson in the 98th minute Wednesday, lifting the Trojans to a wild victory in the second period of overtime.

Annie Dunlop scored the Trojans’ first goal, fueling her team’s fifth straight victory. Sophie Mancini made five saves in goal for Twinfield, which held a 14-6 advantage in shots on goal.

“It’s not easy to play almost 100 minutes, but the girls stayed the course the whole game and never gave up,” Twinfield coach Seth Wilmott said. “We dominated them with possession. The girls did a great job at keeping the ball on the ground and progressing up the field together as a team, instead of trying to rely on a hopeful long ball. I couldn’t be more proud of the way the girls competed tonight. They displayed aspects of their characters that you just can’t teach.”

THETFORD — Becca Dupere scored her 18th goal of the season in regulation Wednesday and tucked away her 19th in overtime.

The junior striker scored on a Piper Mattsson assist in the 30th minute to give her team a 1-0 halftime advantage. Thetford equalized in the 73rd minute on a second-chance opportunity after Paine Mountain goalie Erin McGinnis (11 saves) made an impressive save on a free kick.

“Erin saw a lot of shots come her way today,” Paine Mountain coach Steven LaRock said. “She did well to position herself for every shot that came in from the outside. That free kick was a rocket. She did really well to make the initial save, but just couldn’t hold onto the ball. It happens. Erin is a good goalkeeper and continues to get better. I’m proud of how she played today and I know her teammates appreciate what she does for us.”

Dupere was fouled inside the 18-yard box during the final minutes of overtime. She showed off her power with a shot into the right corner to end things. Paine Mountain (8-3) will host Harwood at 7 p.m. Saturday under the lights at Norwich University.