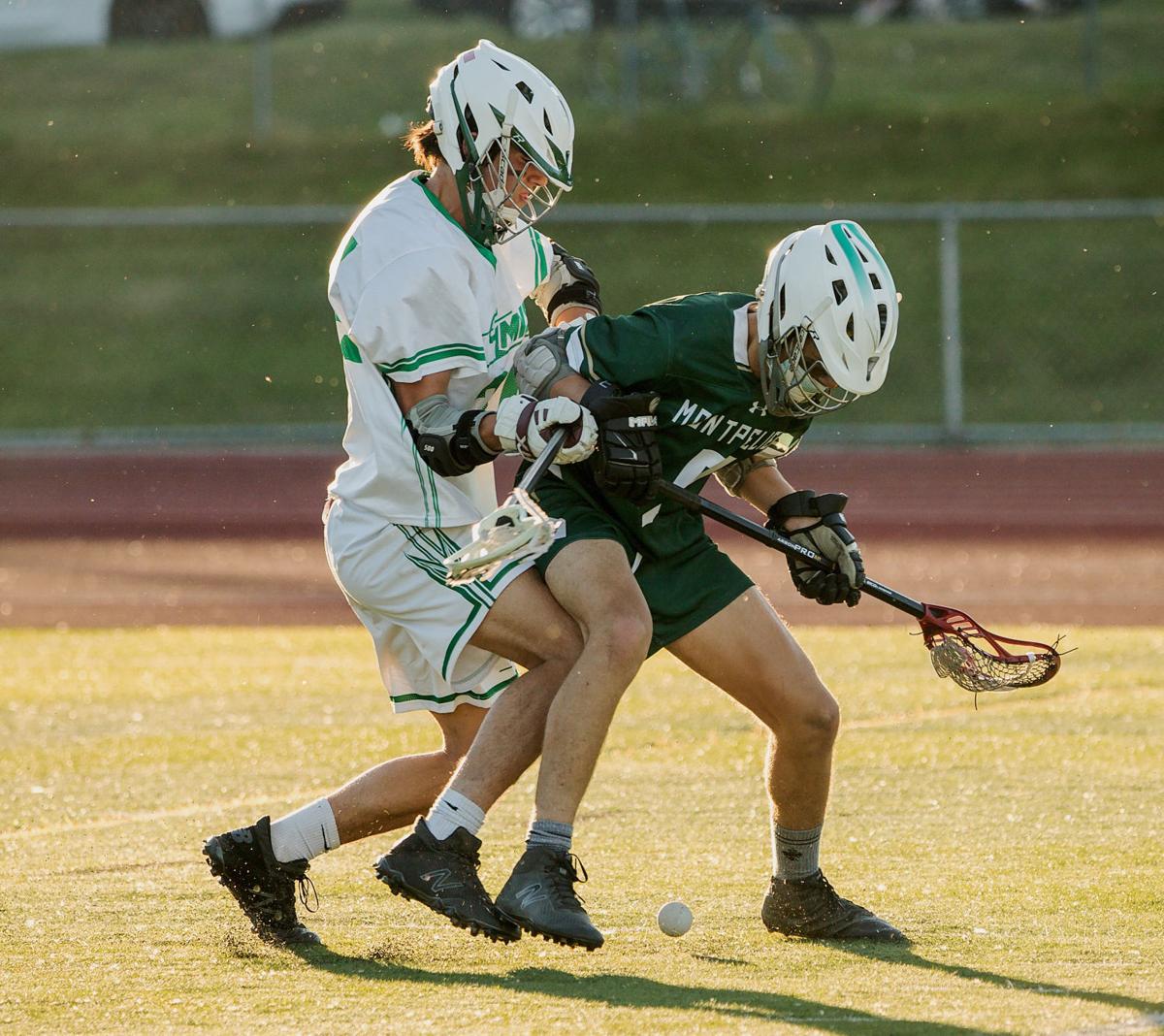 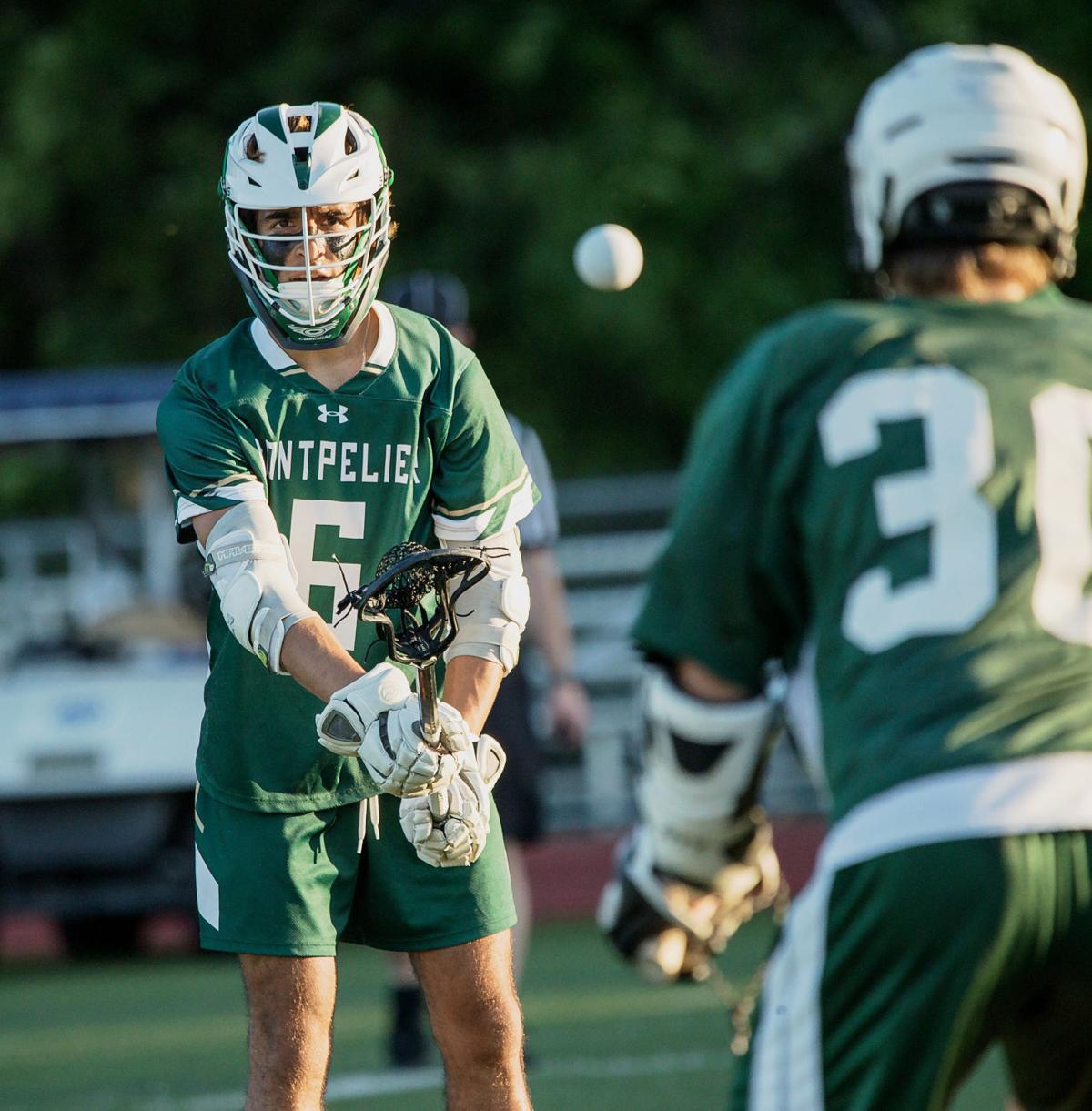 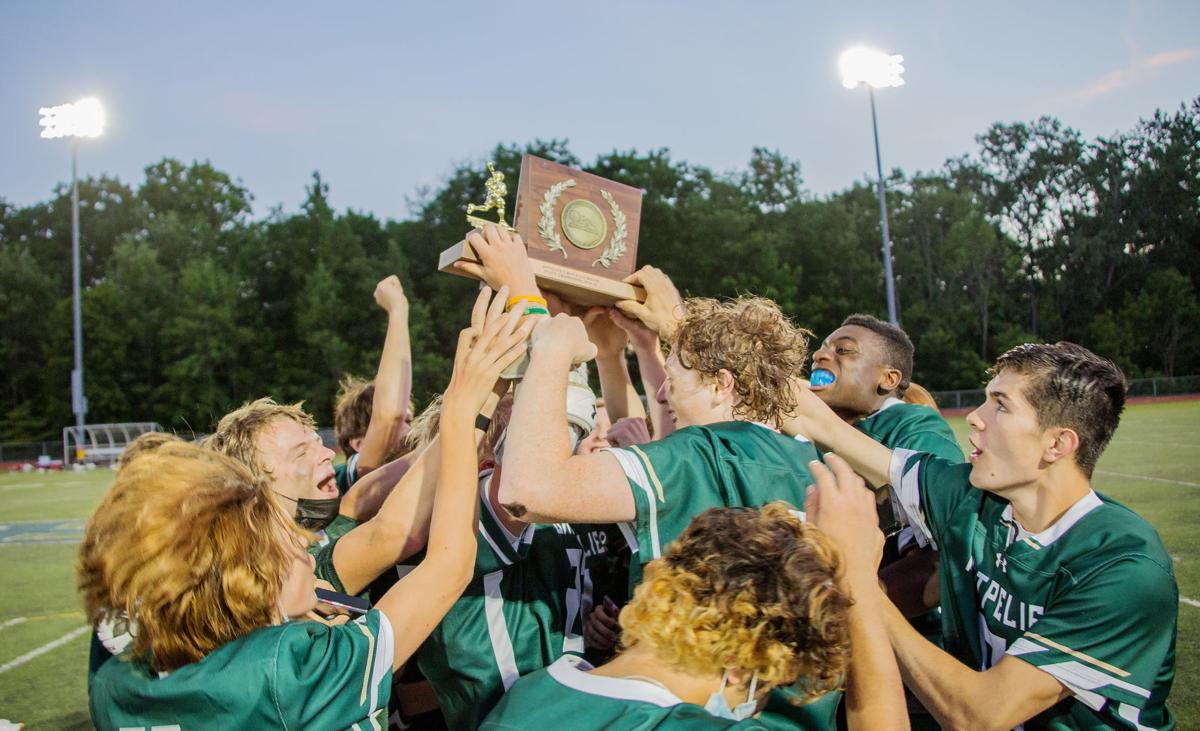 Members of the Montpelier boys lacrosse team hoist the Division III championships trophy after earning an 8-6 victory over the Green Mountain Valley School. 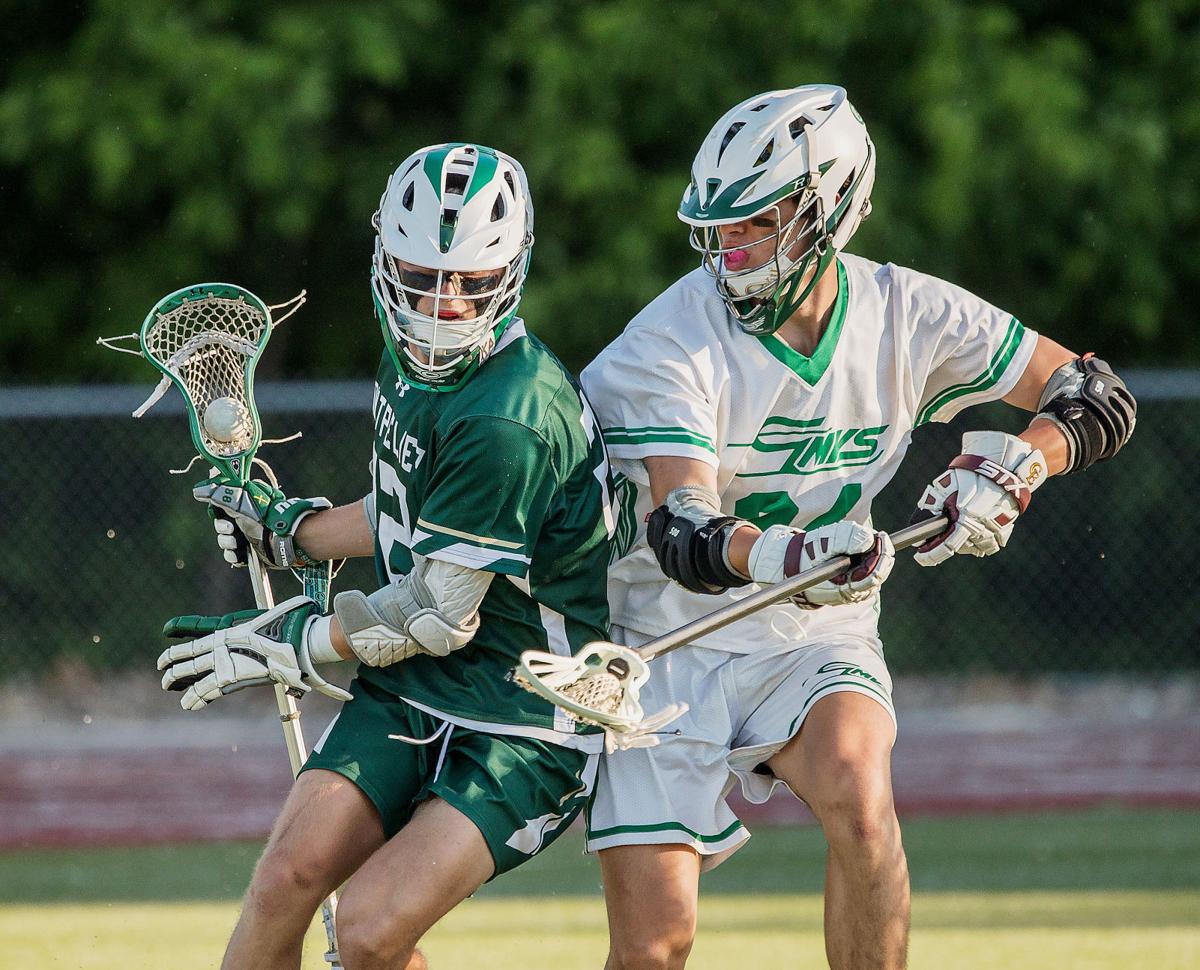 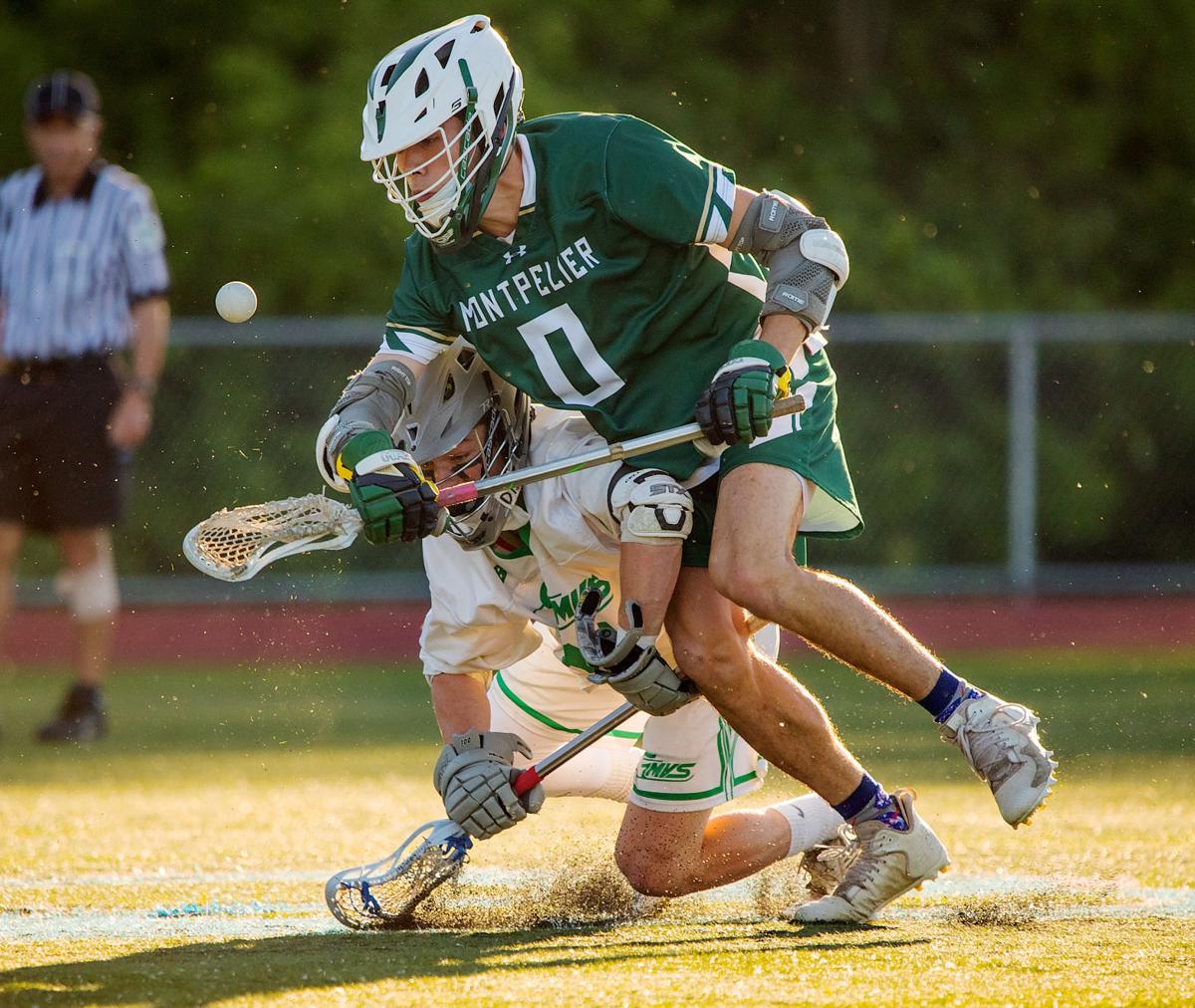 Members of the Montpelier boys lacrosse team hoist the Division III championships trophy after earning an 8-6 victory over the Green Mountain Valley School.

BURLINGTON — Montpelier added a boys lacrosse title to its trophy case for the first time in 21 years with Wednesday night’s 8-6 victory over GMVS in the Division III championship.

The No. 2 Solons (7-3) outlasted the No. 1 Gumbies (6-3) down the stretch, thanks to some clutch saves by goalie Winslow Monde (eight saves).

“Winslow was making the right saves at the right moment and he came up huge in the fourth quarter,” Montpelier coach Nate Noble said.

“Quinn was drawing the slides, which opened up everyone else,” Noble said.

The Solons claimed their only other title in 2000 with a 20-2 victory over U-32. This year’s MHS team opened the season with a 19-3 loss to D-II finalist Rice before rattling off six straight victories.

“Winslow Monde didn’t even start out as a goalie his freshman year,” Noble said. “He was kind of forced into it and sacrificed his body everyday for this team. Neil and Evan Rohan and Evan Smith played lights-out on the defensive end and worked hard to contain the speed of GMVS. It truly was a great championship and GMVS is just one of those teams that you want to play against.”

Montpelier had not won a playoff game or recorded a winning season since 2013.

“Today it really set in,” Noble said. “I started coaching this program four years ago with this group of seniors. And it just really seems like, ‘Mission accomplished.’ Everything came together at the right time. My hat goes off to the seniors and also to the guys who stepped up today. I kind of lost track that Sinah had four goals, but he was really a great playmaker.”

HARTFORD — Ace Owen Kellington (17 strikeouts) threw a three-hitter during Wednesday’s Division II semifinal, lifting the No. 5 Raiders (13-3) past the No. 1 Hurricanes (16-1).

“It certainly played out the way we hoped it would,” U-32 coach Geoff Green said. “We struggled to get anything going in the first three innings because we were striking out too much. But once we refocussed and got back to making solid contact and getting the bat of the ball — hunting fastballs and being aggressive — is when things really started to turn around. I think we struck out five times in the first three innings. And then only once in the next four. So that was really the story of the ball game. Once we were able to get back to just making contact, things started to go our way.”

Concessi went 3-for-4 and recorded one stolen base. Cioffi wound up going 2-for-3.

“It was great to see Peter and Tony cash a couple runs in,” Green said. “We have confidence in our lineup, top to bottom. Tony hits second for a reason. And we would have felt comfortable with Peter batting second as well. They’re two guys who maybe haven’t had their names in the paper as often as some of the other guys on our team. But I have total confidence in them, particularly in clutch situations. We sacrifice bunted, knowing Peter was on deck. We were confident in Peter’s ability to come through, and he did exactly that.”