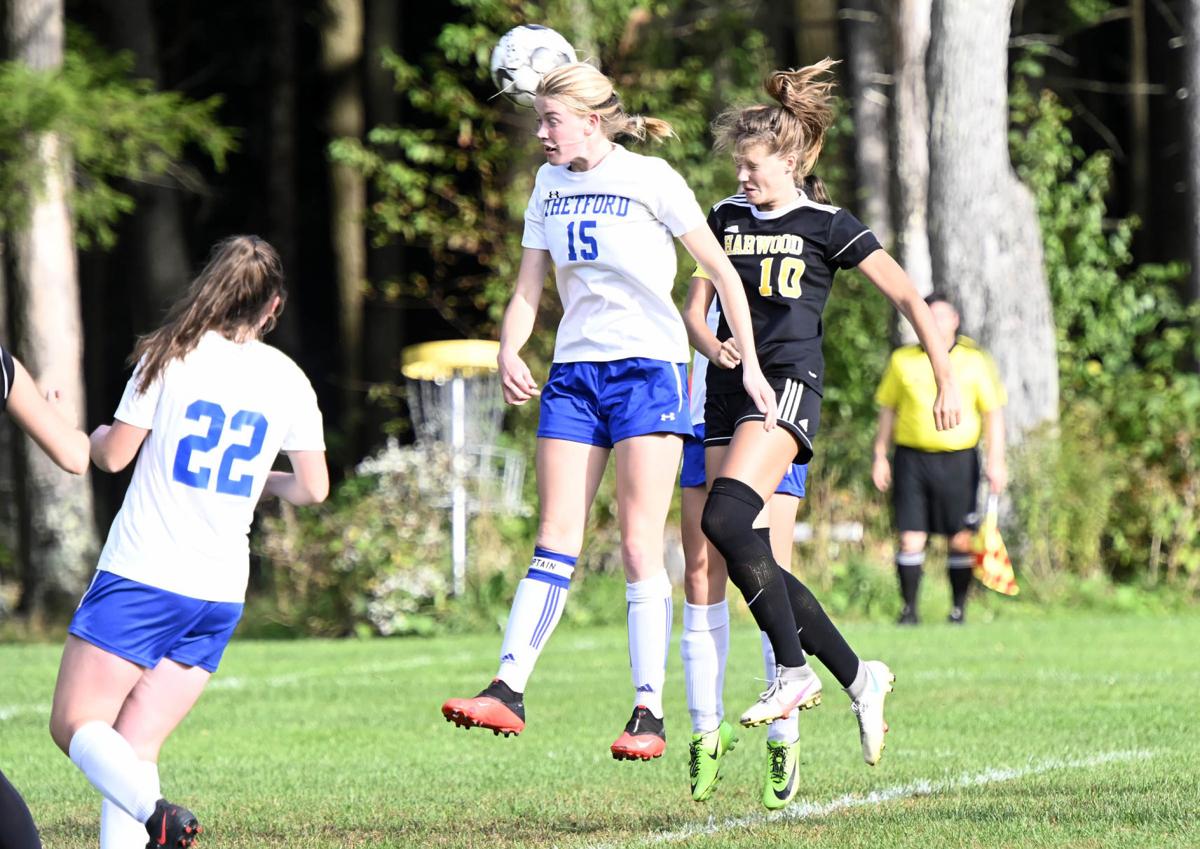 Thetford’s Kiran Black and Harwood’s Tanum Nelson vie for a head ball on a corner kick during the first half of their girls soccer game Thursday. 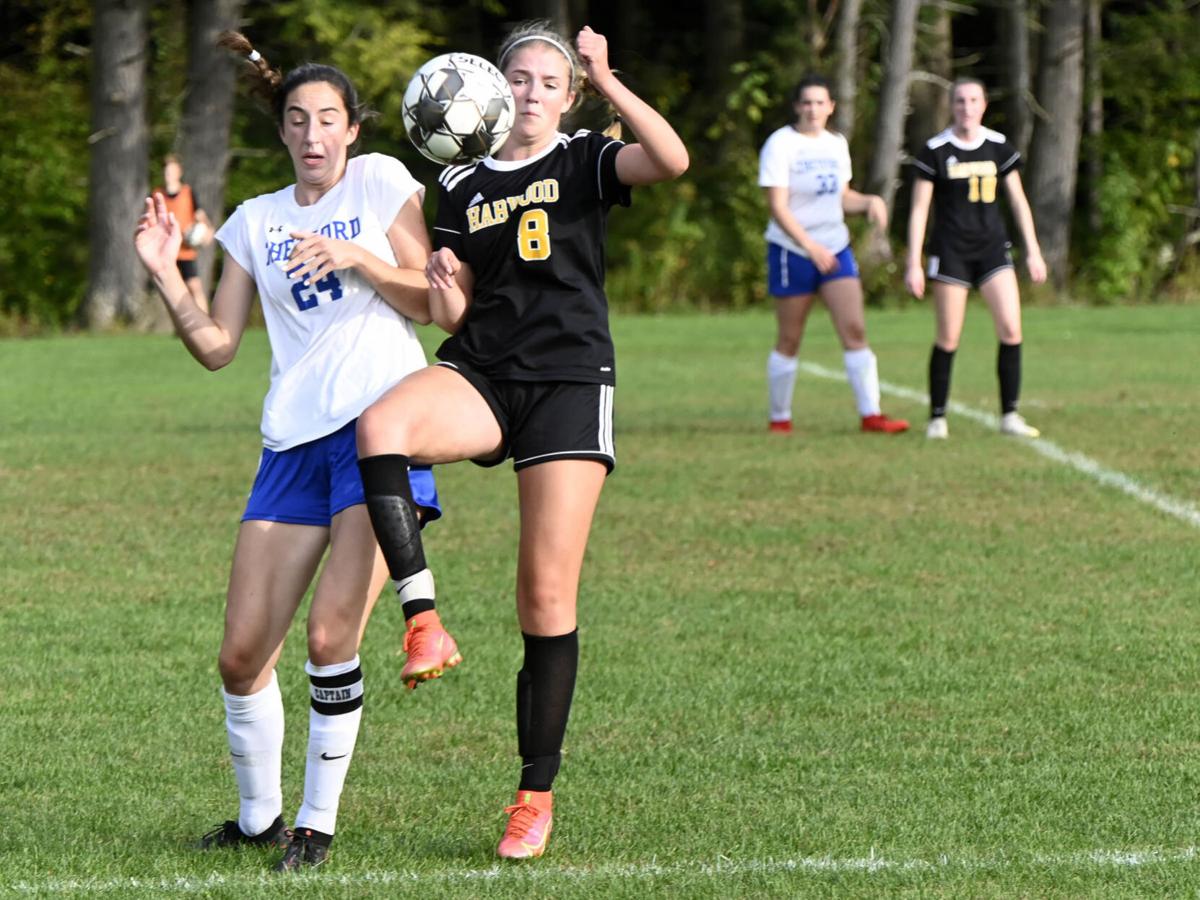 Thetford’s Madison Powers and Harwood’s Cierra McKay battle for the ball during the first half of their girls soccer game Thursday. 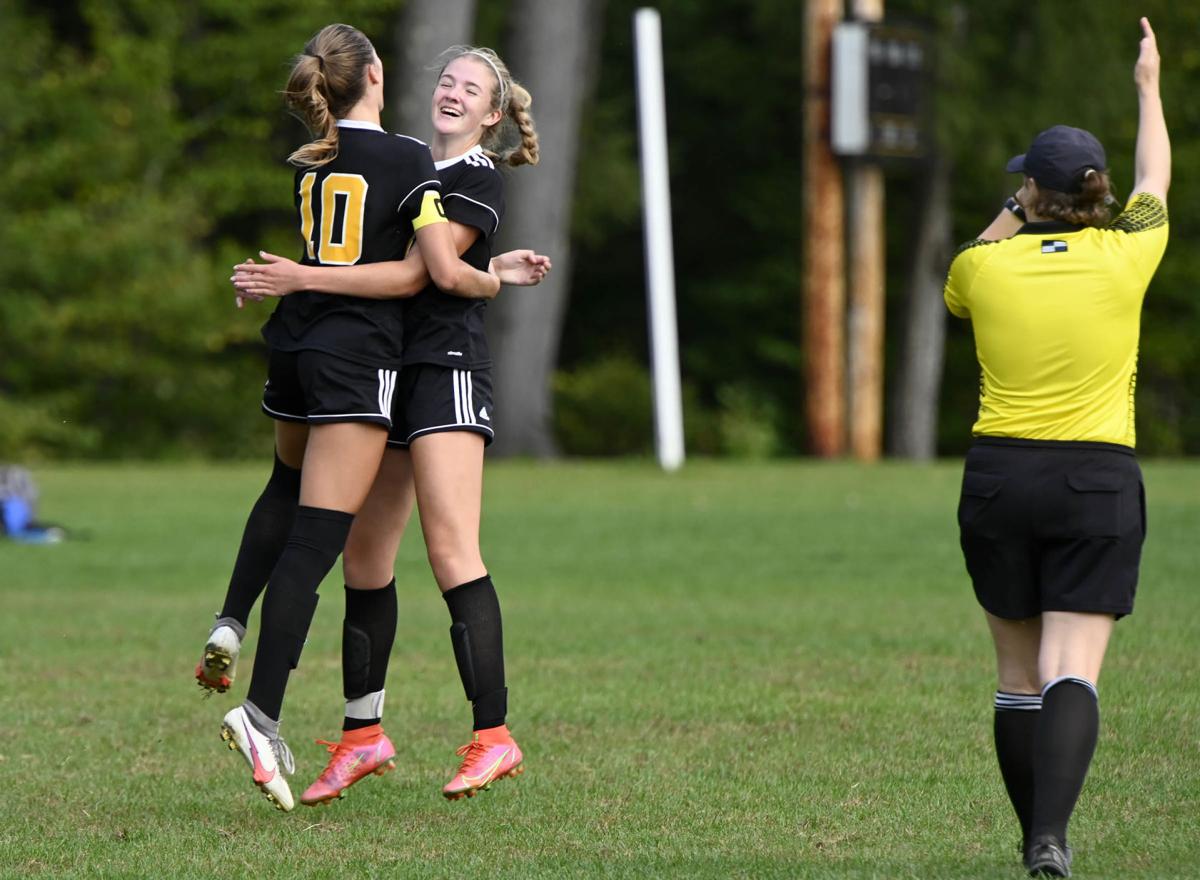 Harwood's Tanum Nelson and Cierra McKay celebrate a first-half goal during their girls soccer game against Thetford on Thursday. 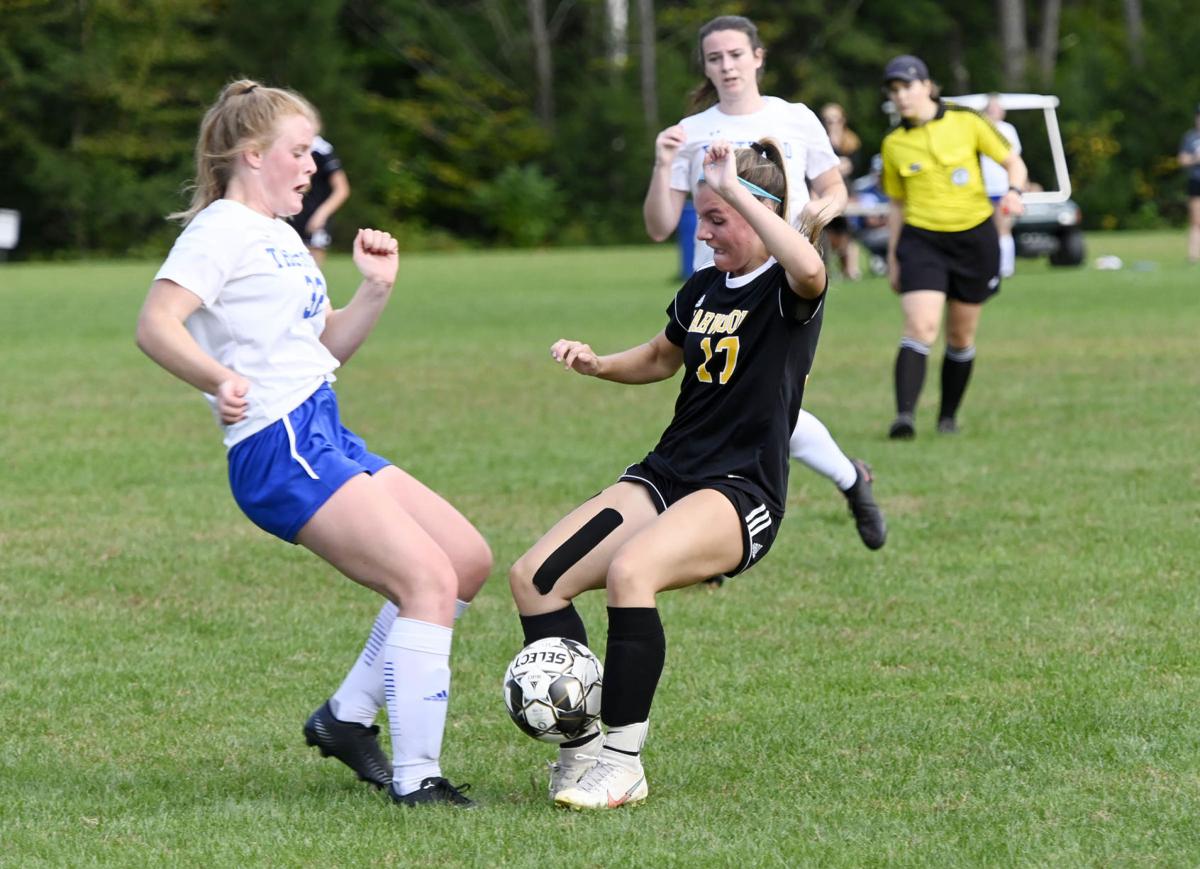 Thetford’s Whitney Lewis and Harwood’s Carmen Lafayette charge at a loose ball during the first half of their girls soccer game Thursday.

Thetford’s Kiran Black and Harwood’s Tanum Nelson vie for a head ball on a corner kick during the first half of their girls soccer game Thursday.

Thetford’s Madison Powers and Harwood’s Cierra McKay battle for the ball during the first half of their girls soccer game Thursday.

Harwood's Tanum Nelson and Cierra McKay celebrate a first-half goal during their girls soccer game against Thetford on Thursday.

Thetford’s Whitney Lewis and Harwood’s Carmen Lafayette charge at a loose ball during the first half of their girls soccer game Thursday.

DUXBURY — The Harwood girls soccer team pumped in a half-dozen unanswered goals in the second half while waltzing past Thetford, 7-1, on Thursday.

“We’re moving the ball and we’re giving a lot of people opportunities to go to net,” Harwood coach Mike Vasseur said. “The more members of the team we can get involved in the scoring and the assists, obviously the stronger we’re going to be.”

Madison Powers scored for Thetford in the 15th minute to open up a 1-0 lead. Lafayette assisted McKay in the 24th minutes, resulting in a 1-1 deadlock entering halftime.

Rand set up Tanum Nelson for a 2-1 advantage in the 46th minute. Tanum Nelson headed in a free kick from Thomsen to make it 3-1 in the 48th minute.

Quinn Nelson assisted her older sister in the 62nd minute, extending the lead to 4-1. Less than two minutes later Thomsen settled a pass from Nordle and showed off her foot skills and shooting power for a 5-1 cushion. McKay set up Tanum Nelson for a delicate finish midway through the second half. A left-footed blast by Thomsen capped the scoring in the 70th minute.

“We played completely different after halftime,” Vasseur said. “At the start of the game we played slow and we weren’t as aggressive as we needed to be. The captains talked about how we needed to be more aggressive and play faster, and that’s exactly what we did. We played much better in the second half and we played more our style. We just needed to get our breath at halftime.”

“Thetford had beaten us twice in the last four years and I’m not taking anybody lightly,” Vasseur said. “You only need to go on the back of your heels — as we saw in the half today — and it becomes a much different game when you’re not playing your style.”

POULTNEY — The Proctor girls soccer team extended its record to 6-0 by beating Poultney 6-0 on Thursday.

“We were a little flat coming out but we stepped it up after about 15 minutes,” Proctor coach Chris Hughes said.

SHELBURNE — Garret Cameron shot a 42 for the Crimson Tide during Thursday’s double-digit victory at Kwiniaski.

Spaulding’s Brady Lamberti, Dylan Bachand and Jamison Mast all wound up with a 43, while teammate Ned McCarthy added a non-scoring 45. The top performers for BFA were Darik Gregoire (44), Camden Piper (44), Carter Veronneau (47) and Cael Gonyeau (48). Leading the way for South Burlington were Kiefer McGrath (40), Evan Marchossault (43) and Andrew Bouffard (48). Hugo Crainich shot a 49 to pace Burlington.

MIDDLEBURY — Mount Mansfield broke through for its first field hockey victory of the season on Thursday, blanking Middlebury 3-0.

WESTMINSTER — Division I Bellows Falls flexed its muscles with a 15-0 win against Springfield.

Zada Grant made 26 saves in goal for the Cosmos.

“Bellows falls is a wonderful team to play against. They are pure talent,” said Springfield coach Alex Nikolovski.

“We have a young group and these are the teams that are going to make us better. The girls are improving every day.”

Springfield (0-5) are at Otter Valley for the Otters’ Homecoming game on Saturday.

Norwich senior goalkeeper Kim Watt made 11 saves, but it wasn’t enough as NU (2-3, 1-3 GNAC) had its two-game winning streak snapped by the Lasers.

Alyssa DeOliveira made it 2-0 with a rocket from 25 yards out that beat Watt to the far post off an assist from Maria Henriquez in the 39th minute. Speight capped the scoring in the 67th minute with a goal off an assist from Narissa Libby. Speight buried the ball into the left corner of the net from outside the penalty box.

The Cadets will host Johnson & Wales University as part of Norwich Homecoming Weekend at 6 p.m. Saturday.

CASTLETON — The Castleton field hockey team scored the most goals it has this season, beating Sage College at Dave Wolk Stadium.

The Spartans scored all five first-half goals, with Kaitlin Bardellini scoring three times and Emily Harris twice in the first. Assists in the first half came from Haley Corlew and Harris, both doing so twice.

Sage’s Kyndra Riche scored quickly in the third quarter, before Harris and Corlew extended the Castleton advantage. Bardellini assisted on the Harris goal and Payton Barlow assisted on Corlew’s tally.

Ashlee Billert scored for the Gators, before Harris scored twice more, with Bardellini assisting on the latter, making it 9-2 heading to the fourth.

In the fourth quarter, Corlew scored the first two goals and Barlow added the next. Harris’ dream night kept building with her sixth goal, before a goal from Amelia Wilson off a corner.

Harris’ six goal night brings her total to 14 for the season.

Castleton (3-5) is at Eastern Connecticut State on Saturday.