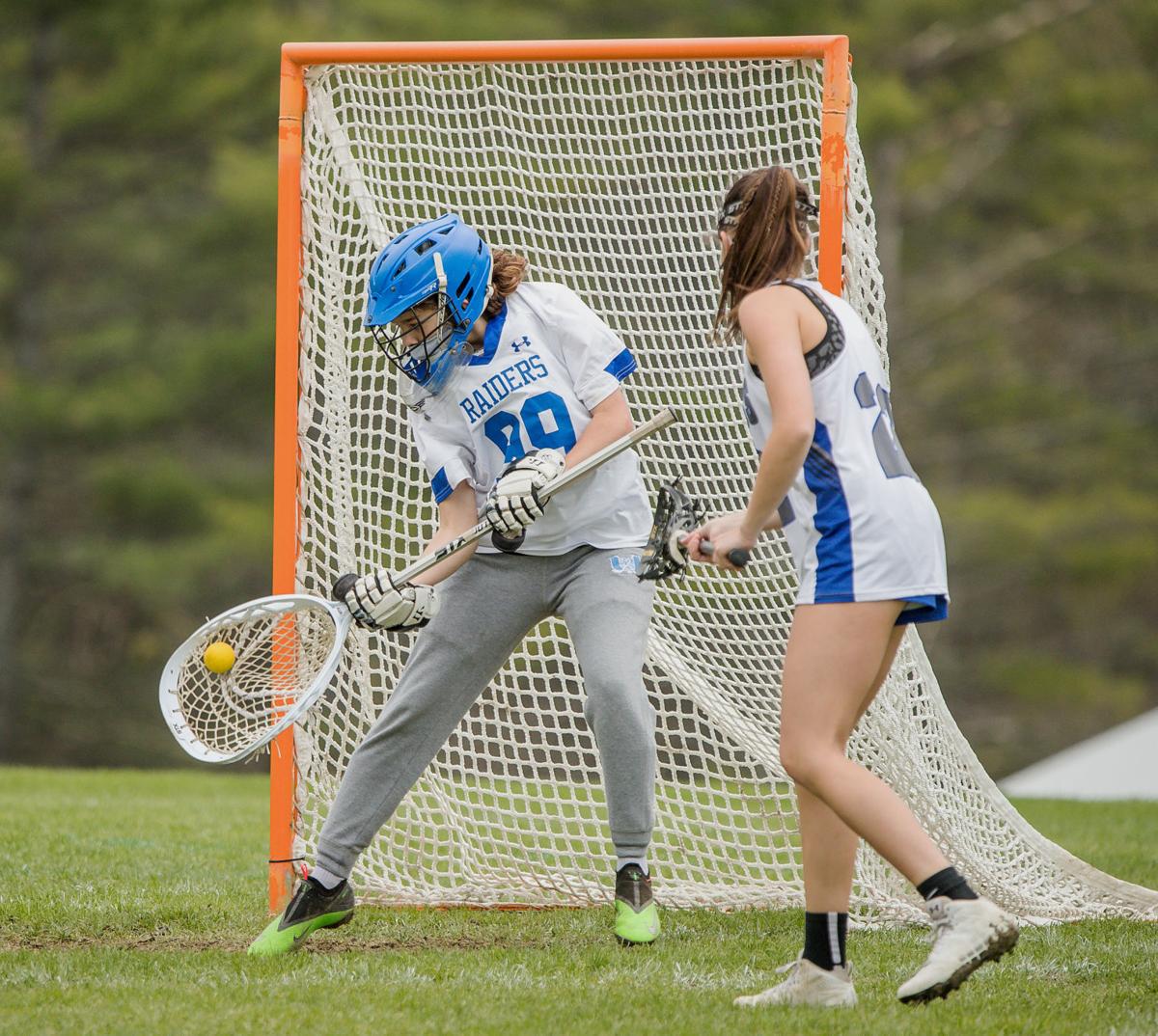 U-32 goalie Emily Fuller makes a save during Monday’s girls lacrosse victory over Stowe. 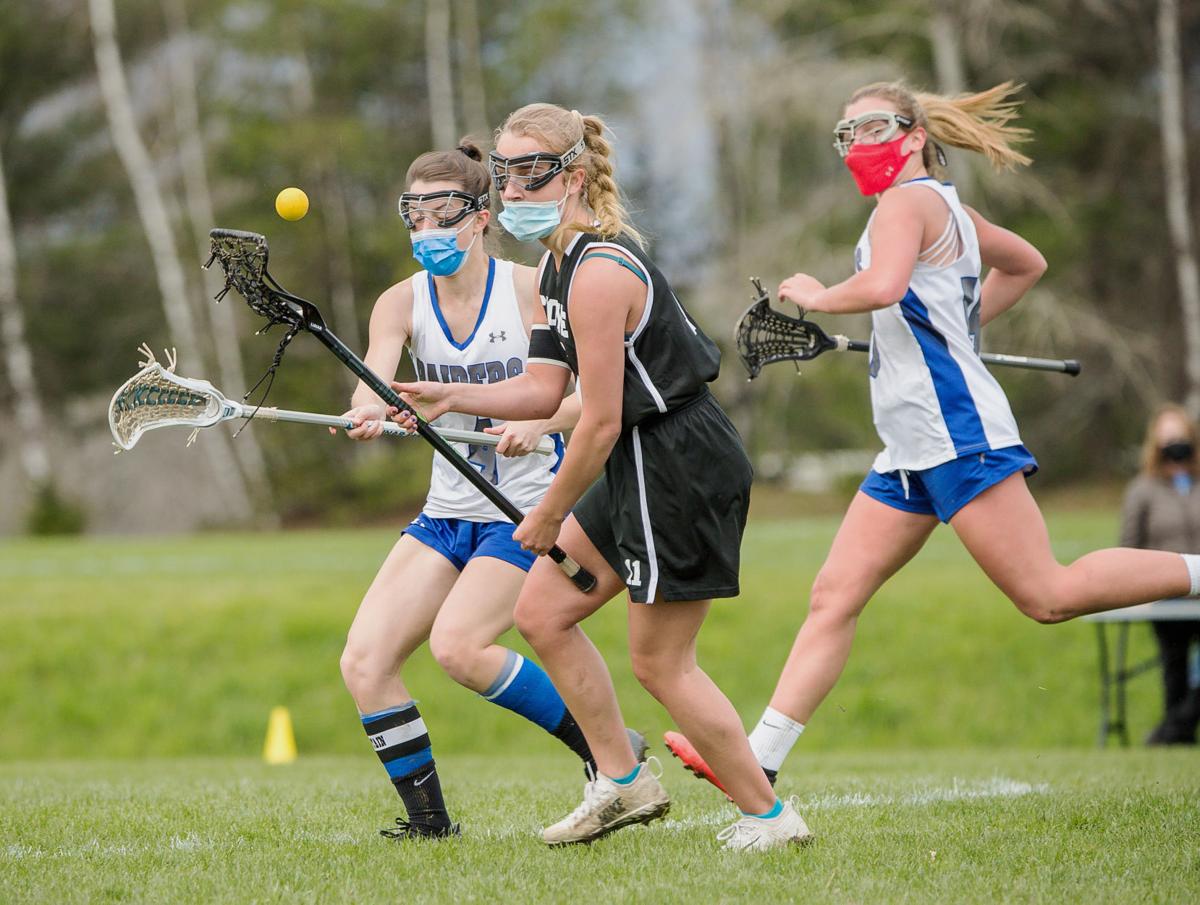 Spaulding and U-32 players compete during Monday’s girls lacrosse game in East Montpelier. 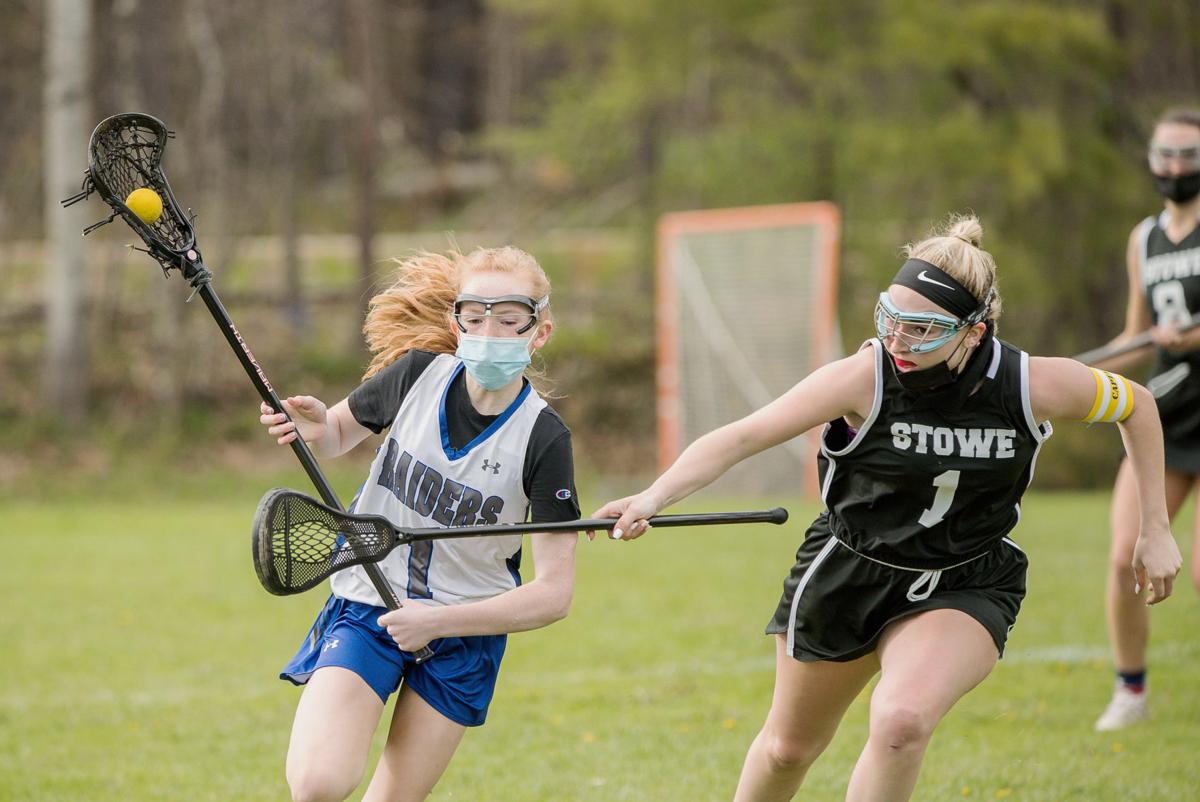 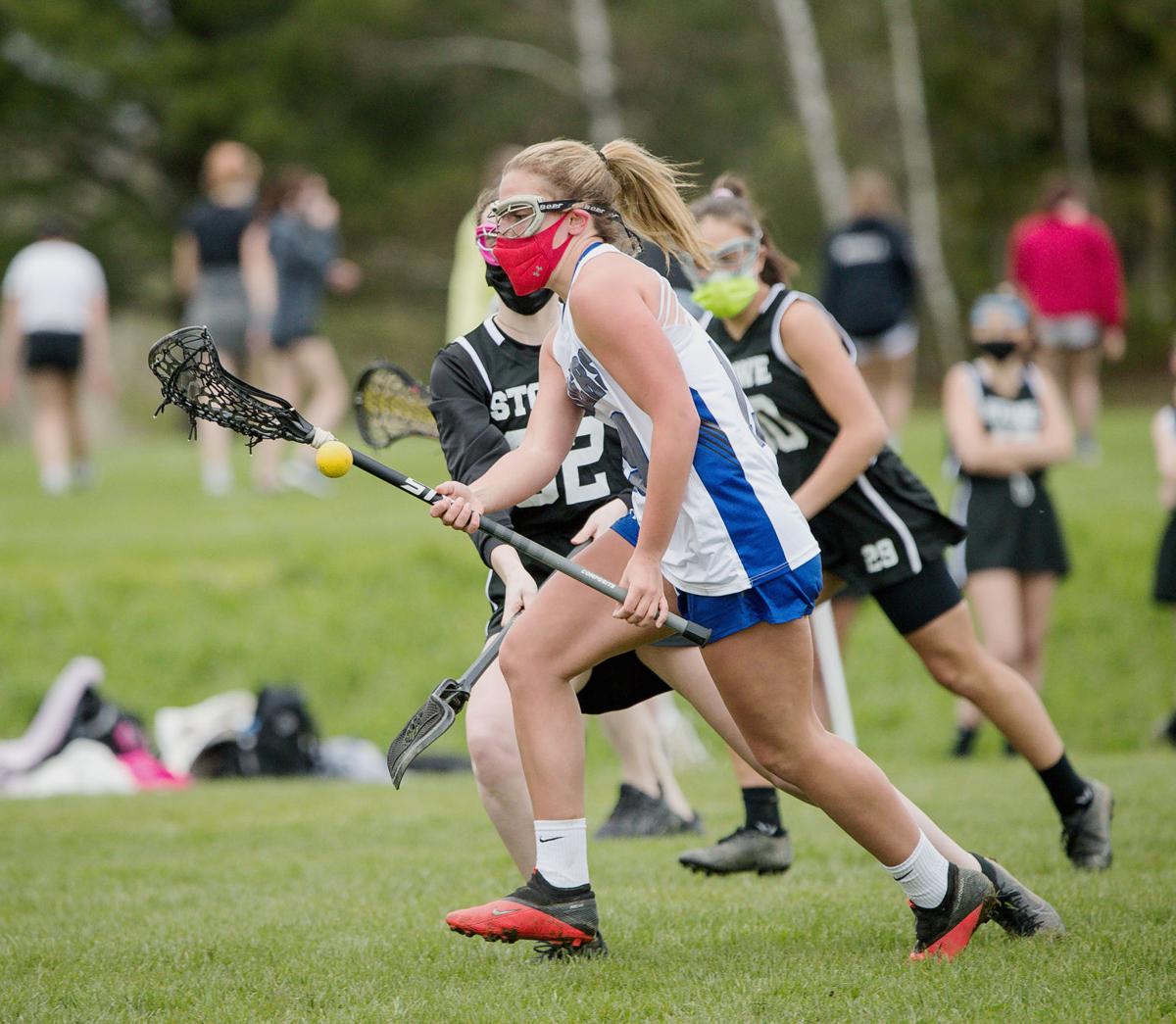 A U-32 player sprints toward the goal during Monday’s girls lacrosse game against Stowe. 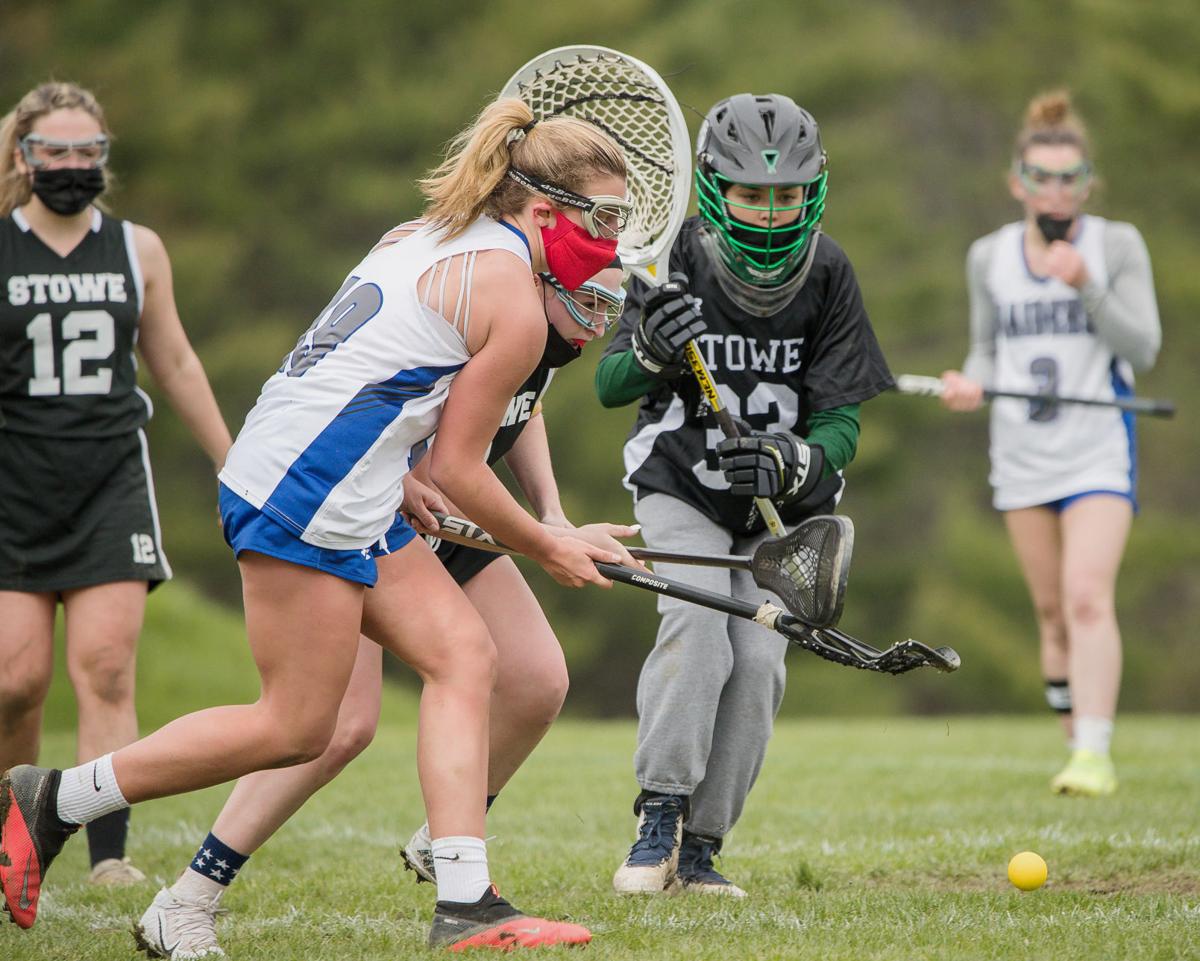 U-32 and Stowe players attempt to scoop up a ground ball Monday during girls lacrosse action in East Montpelier. 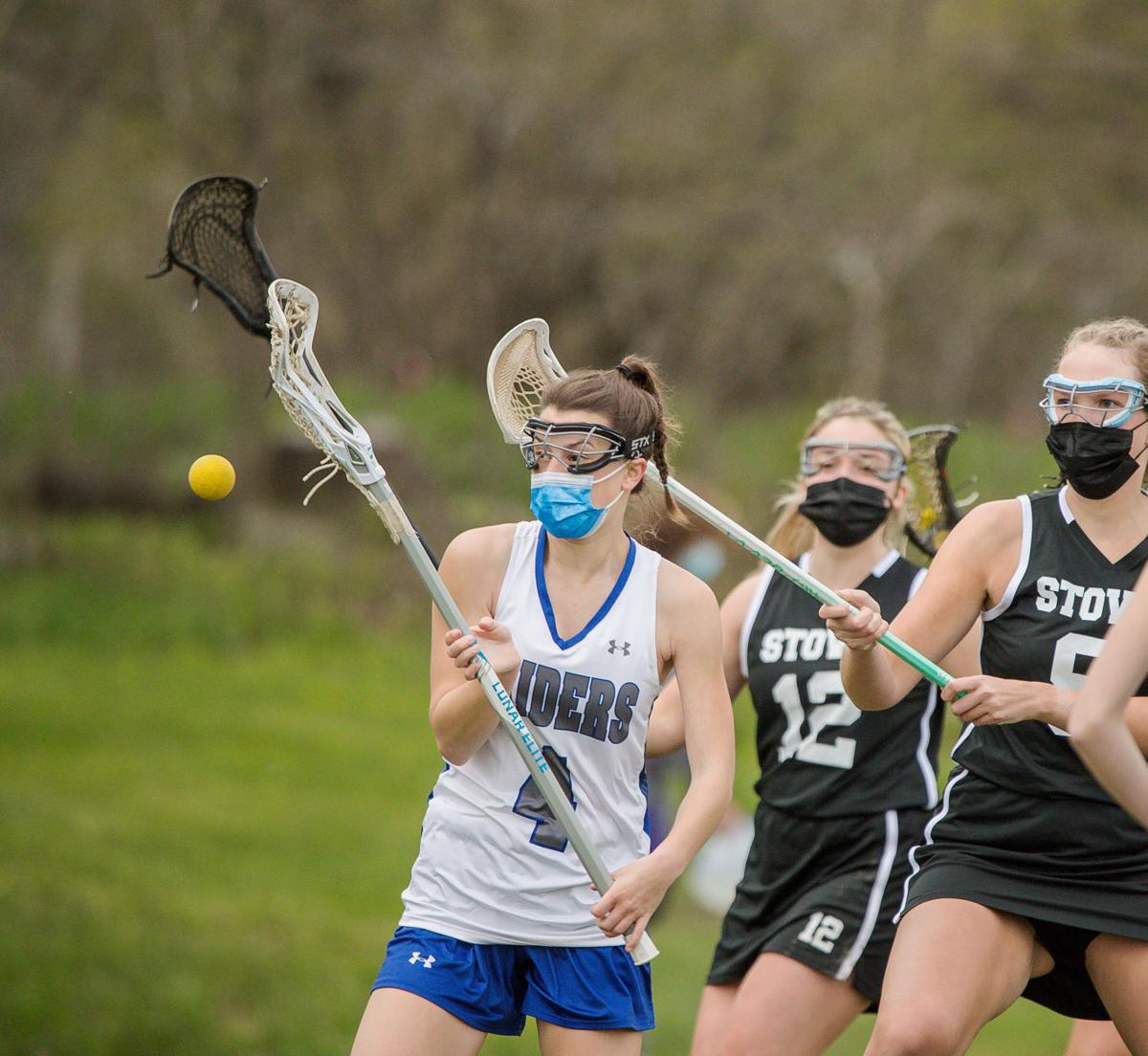 U-32 goalie Emily Fuller makes a save during Monday’s girls lacrosse victory over Stowe.

Spaulding and U-32 players compete during Monday’s girls lacrosse game in East Montpelier.

A U-32 player sprints toward the goal during Monday’s girls lacrosse game against Stowe.

U-32 and Stowe players attempt to scoop up a ground ball Monday during girls lacrosse action in East Montpelier.

EAST MONTPELIER — U-32 is no stranger to the highs and lows of girls lacrosse after the first three games of its spring season.

The Raiders endured a pair of early double-digit losses but were finally on the winning end a lopsided outcome Monday.

Strong performances by Caitlyn Fielder and Emily Fuller lifted U-32 to a 16-5 victory over Stowe, giving their team a timely boost during a busy stretch. The Raiders will play their third game in four days Tuesday before taking the field again Friday.

“Caitlyn really stood out today and took control, which I expect her to do a lot this year,” U-32 coach Emily Connor said. “And Emily stepped up in goal and stopped some hard shots. She was the star of the game.”

“It took us a little while to get going and it was 2-2 for a bit,” U-32 coach Emilie Connor said. “And then we finally came out stronger on attack. We barely won the draw control battle, 12-11. So they won quite a few draws, but we were forcing turnovers. Our defense improved a lot from playing two hard first games against two of the top teams in the division. So that benefitted us a lot today.”

Ella Murphy and Reagan Smith scored two goals apiece in the losing effort. Their team trailed 8-3 at halftime and struggled to get anything past Fuller after the break. Stowe opened the season with a 15-7 victory over Colchester and will host Rice at 4:30 p.m. Wednesday.

U-32 bounced back from a 13-2 loss to GMVS and a 16-5 defeat at Vergennes. Saturday’s loss to the Commodores wasn’t a surprise to Connor after the defending champs dominated the draw control battle, 17-6.

“Draw controls usually predict the outcome of the game, and that was spot on,” she said.

“Vergennes was strong on attack, so it was good practice for our defense,” Connor said. “They have a lot of returning talent from their team two years ago.”

The Raiders will host Harwood at 4:30 p.m. Tuesday before traveling to play Lamoille on Friday.

“It’s a lot, but we need the experience playing other teams in order to develop who we are on attack,” Connor said. “We need to settle in and learn each other’s habits and work together on offense and defense. Our first two games were super challenging and we were outplayed pretty consistently. So it was nice to play a competitive game against Stowe. …Our field is a little soggy, but there’s such good grass right now and that made a big difference.”

ST. JOHNSBURY — The Hilltoppers’ offensive balance wore down the Crimson Tide during a comfy win Monday.

Eight players scored for St. Johnsbury, which led 7-2 at halftime.

“They’re very good passing-and-catching team,” coach Pinard said. “They’re athletic, skilled, well-coached and there’s no weaknesses out there. They move the ball super well and you can’t key on one kid.”

GMVS goalie Molly Quinlan stopped eight shots. St. Johnsbury’s Clara Andre and Maddie Hurlbert combined to make 26 saves in front of the cage. The Gumbies were unstoppable during an 18-5 victory over Harwood and will return to action Wednesday at Woodstock.

MILTON — The Crimson Tide held the Yellowjackets scoreless during three quarters to secure a double-digit victory.

“We moved Jon back up to long-stick middie today and it definitely made a difference,” Spaulding coach Ian Thomas said. “We’ve been having him play close defense for the start of the season, just to shore up the defense because we’re pretty young back there. We made the decision to move him to middie and it was a good decision. He’s a dynamic player between the restraining lines. He picked off passes on defense and was trying to get into the offense. And he had a big momentum goal in the second quarter.”

Spaulding led 4-0 after the first quarter before heading into halftime with an 8-4 advantage. The Tide scored four unanswered goals in the third quarter before finding the back of the cage twice in the final quarter.

“The whole mission of the day was to see if we can complete a four-quarter game and respond to whatever happens,” Thomas said. “We wanted to play cool, calm and collected and stay tight on defense and not let anything happen in transition. We came out of halftime and the mission was to finish out the game and stay as focussed as we were. We didn’t want to let them crawl back into it. And we wanted to run our systems cleanly and not think about the score. When we focus on the moment, we’re a great team.”

“In the second quarter, almost all of Milton’s goals were in transition,” Thomas said. “At halftime we talked about staying tighter in transition on defense. I honestly didn’t even realize that we had a shutout in the second half — it didn’t really click right away. And to have three shutout quarters is really impressive.”

Owen Kresco won 14 of 15 face-offs for the Tide. He had help from Malnatti, Berard, Jamison Mast and Ryan Glassford on the wings.

“Owen won a lot of face-offs cleanly, but there were also a lot of scrums,” Thomas said. “And our wing play helped a lot.”

Goalie Addison Dietz made seven saves for the Highlanders, who have outscored opponents 43-10. Harwood will host Burr & Burton at 4:30 p.m. Thursday.

The team of Logan Markie and Josh Markie and the team of Dan Cole and Frankie Sanborn finished out the prize-money winners. The event’s 2019 champs, Eric Lajeunesse and Chris Antonez, finished in 16th.