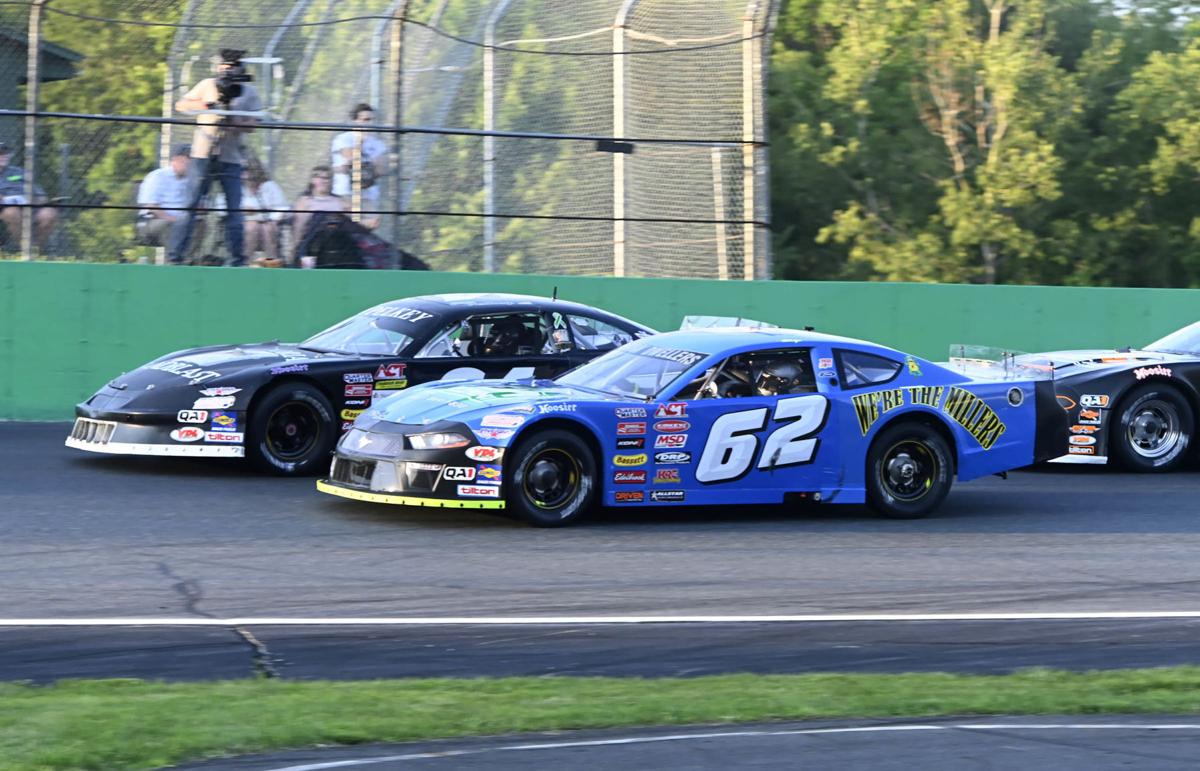 Chris Pelkey, of Graniteville, gets around the outside of Chip Grenier, of Orange, during racing action a Thunder Road on Thursday. Pelkey won the double-point feature event for the Maplewood/Irving Late models at the Times Argus Mid-Season Championships. 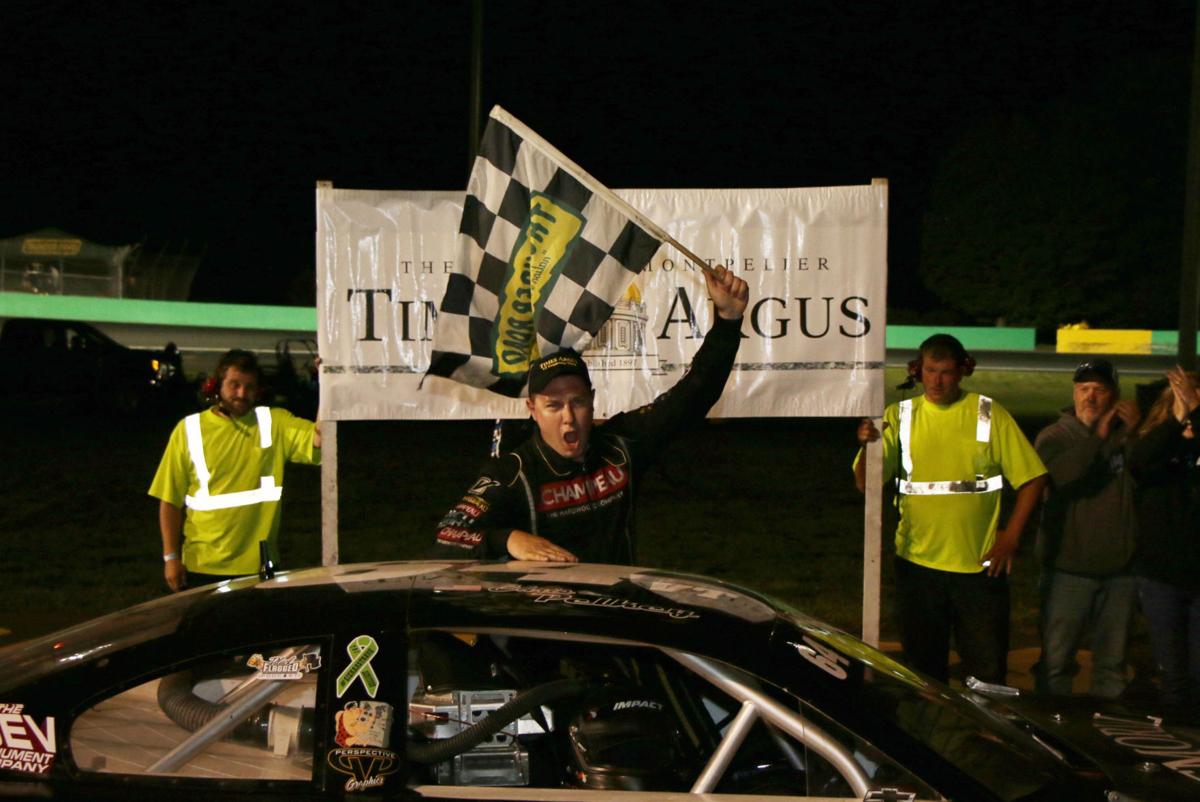 Christopher Pelkey emerges from his car after winning the Maplewood/Irving Oil Late Model feature at the Times Argus Mid-Season Championships on Thursday. 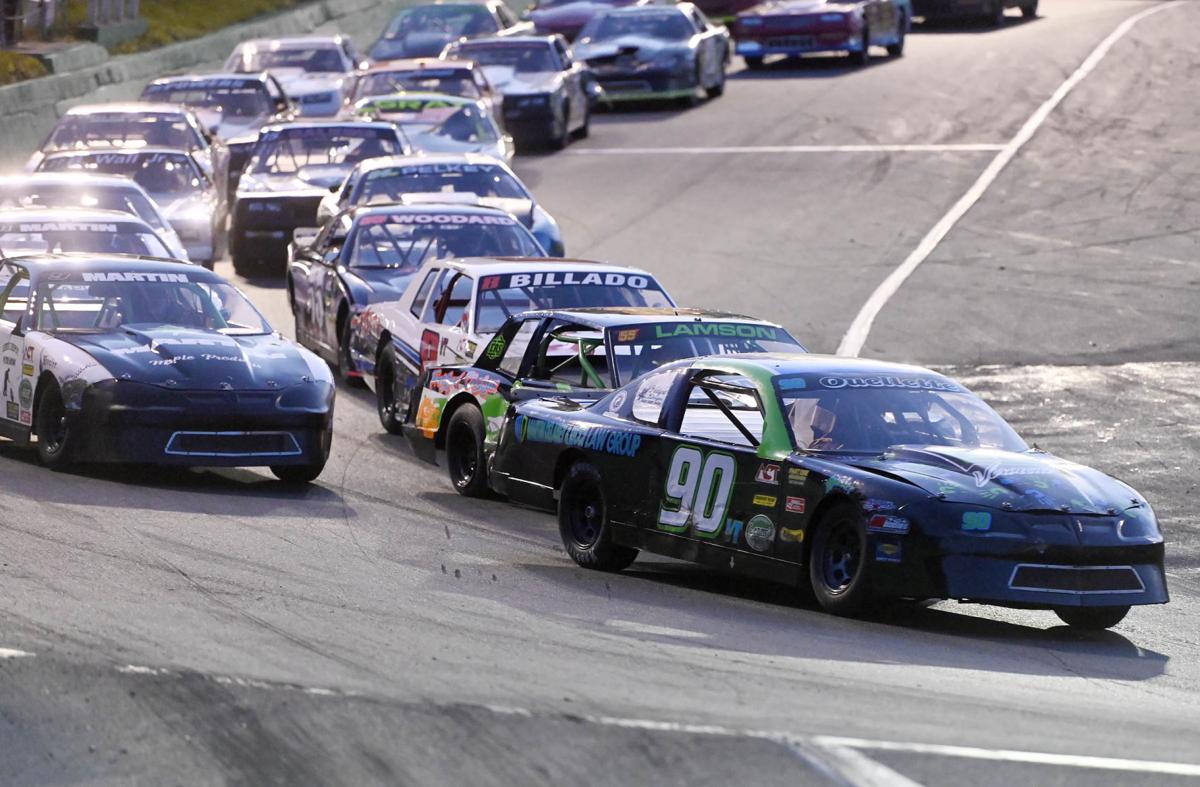 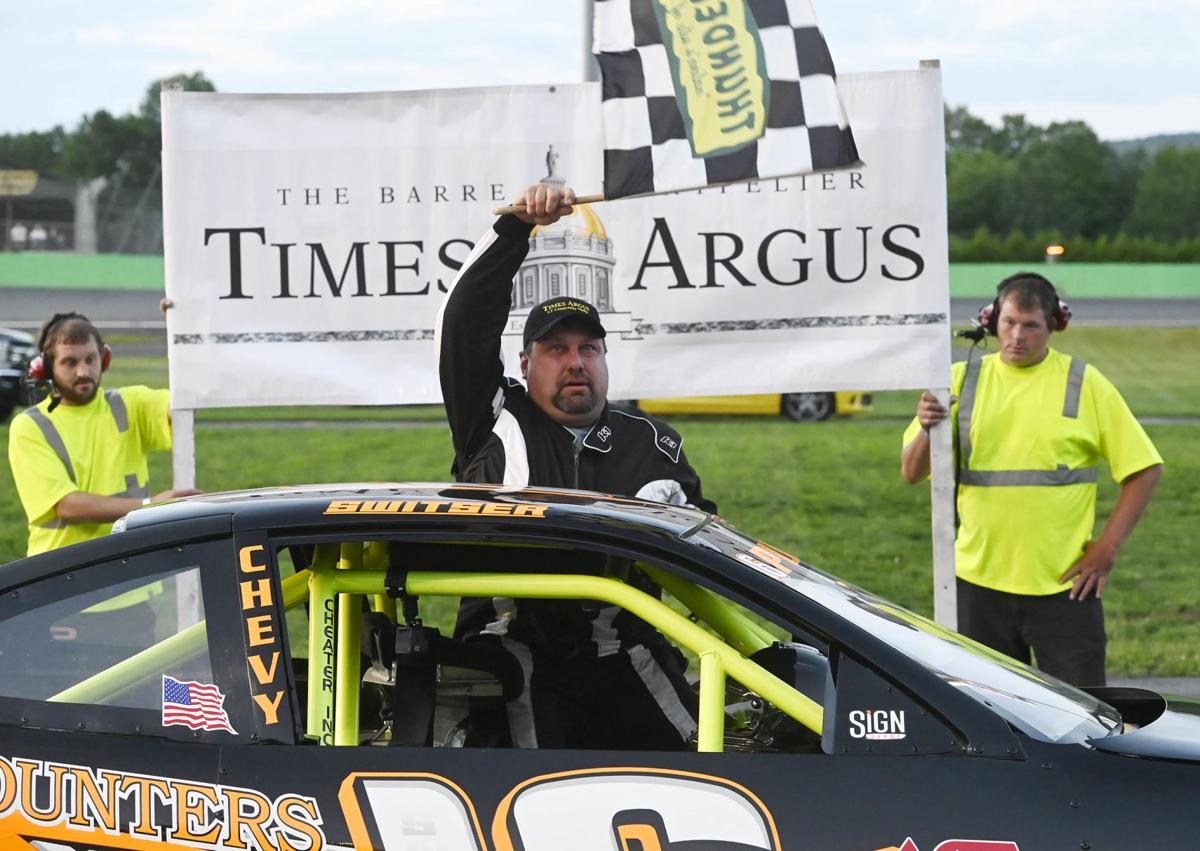 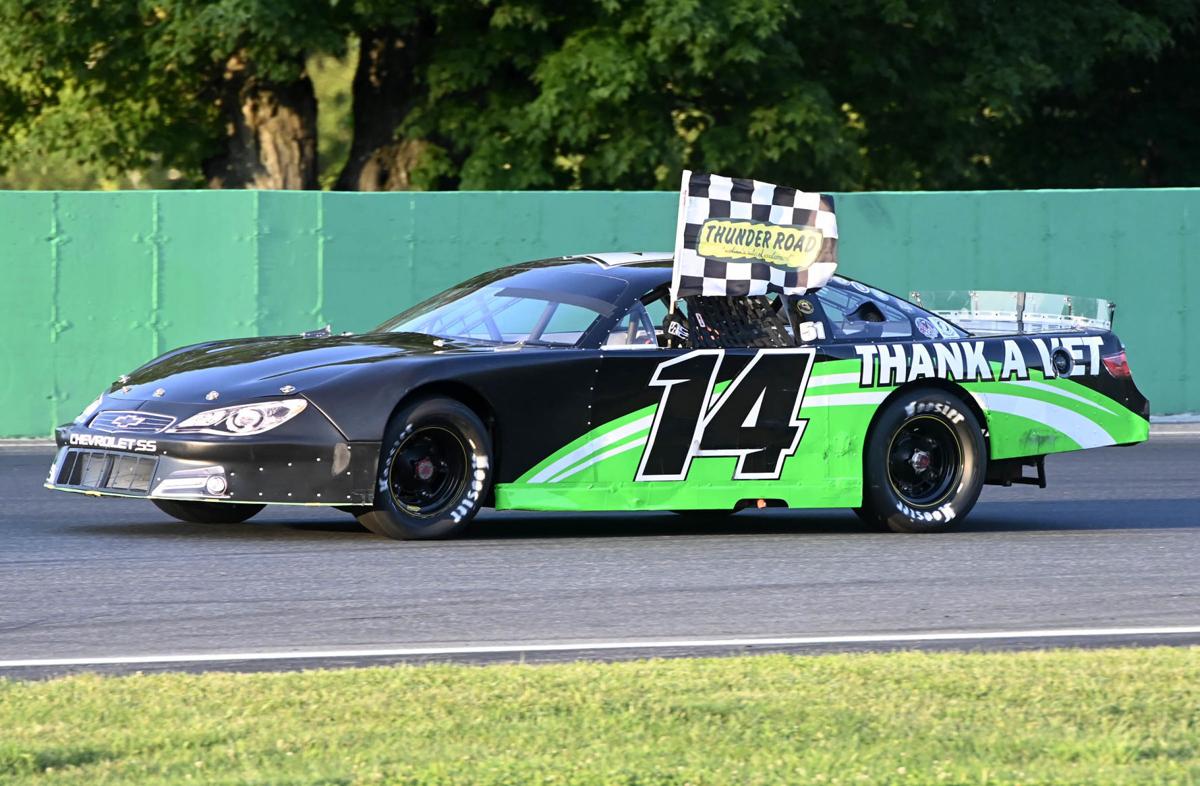 Chris Pelkey, of Graniteville, gets around the outside of Chip Grenier, of Orange, during racing action a Thunder Road on Thursday. Pelkey won the double-point feature event for the Maplewood/Irving Late models at the Times Argus Mid-Season Championships.

Christopher Pelkey emerges from his car after winning the Maplewood/Irving Oil Late Model feature at the Times Argus Mid-Season Championships on Thursday.

Graniteville driver Christopher Pelkey had the car, the skill and the luck to triumph Thursday night during the Times Argus Mid-Season Championships at Thunder Road.

Pelkey grabbed the lead from Wolcott’s Marcel J. Gravel just before halfway mark in the 75-lap main event to earn his second Maplewood/Irving Oil Late Model victory of the season.

The first-place trophy was worth double points and double prize money, thanks to FloRacing. It also came on a night where championship leaders Jason Corliss and Trampas Demers were slowed down by on-track carnage, allowing Pelkey to grab the points lead under a full moon.

Front-row starters Phil Scott and Gravel went back and forth in the early laps before Gravel made a decisive move to the front with seven complete. Six laps later, Grenier attempted to use the inside lane to pass Scott for second place on the backstretch.

Grenier had to check up entering turn three. And with the field inches apart, things stacked up quickly. Stephen Donahue spun around entering turn four, and Corliss, Demers and Kyle Pembroke all piled in with nowhere to go.

All three were able to make it back for the restart following a long caution period for water clean-up.

But the craziness was far from over.

Scott had trouble on the restart and lost ground. One lap after going green, Chris Roberts lost a right-front tire entering turn one and pounded the barriers. At that point, Corliss was forced to drop out of the event due to ongoing complications from the previous crash. Demers made multiple pit-road trips in an attempt to repair his machine.

When the green flag flew again, Chip Grenier put his bumper out front to lead lap 15. Gravel took the top spot back one lap later. Tyler Cahoon sped below Grenier for second place before Grenier lost control entering turn three. Eric Chase and Darrell Morin also caught a piece of the accident, sending all three drivers out of the event.

Cahoon was able to set the pace for one lap following the restart before Gravel grabbed the lead. Pelkey slid under Cahoon for second and spent the next 15 laps hounding Gravel. He finally made his move on the outside, snatching the lead with 36 laps complete. Gravel hung to Pelkey’s bumper for awhile to keep things interesting. But with 59 laps of green-flag racing at the end, Pelkey’s long-run power paid off for his second victory in three weeks.

Gravel’s second-place finish was still impressive given the circumstances. The youngster hit the wall during practice after a right-front failure. With his car unfixable at the track, Gravel borrowed a ride from Scott Coburn to record his third podium finish of the year.

Ouellette put the nose under Lamson with 30 complete, just as Colin Cornell spun in turn two to bring out the caution flag. The yellow negated the pass and put the field double-wide for a restart. Ouellette got the jump, but a car dumping fluid entering turn one prompted another caution.

The third time was the charm for Ouellette, who got the break on the second restart attempt. The field quickly jumbled up as Lamson slowed with a flat right-rear tire, allowing the Martins to jump to second and third. Stephen kept the pressure on Ouellette for the rest of the event but could not get around him. It was Ouellette’s first victory since returning to Thunder Road racing in 2020 following a kidney transplant.

Waterford’s Dean Switser Jr. picked a great time for his first win of the year by capturing the 35-lap RK Miles Street Stock feature. Switser slashed his way from ninth on the grid to move into second following a lap-18 caution for a Jamie Davis spin. He immediately set his sights on leader Derek Farnham.

Switser worked the outside line multiple to times, but to no avail. With nine laps to go, he switched things up and sped to the inside of Farnham to grab the lead. No one could catch Switser from there as he rolled to the double-points victory.

Milton’s Bert Duffy had just enough to grab his first career Burnett Scrap Metals Road Warrior victory. Duffy started on the pole for the 25-lap feature and ran away early. After a trio of mid-race crashes, he again put the pedal down and took off with authority.

Duffy’s car began showing smoke in the closing laps. At the same time, Graniteville’s Frank Putney — who had been last on the track after an opening-lap scuffle — chased toward the front. Williamstown’s Nate Brien also made a move. Putney caught Duffy first and got alongside his passenger door on the final circuit. Despite his car coughing and wheezing, Duffy prevailed by a fraction of a second.

Thunder Road will begin the second half of the season July 29 with WDEV Radio/Calkins Windshield World Night. A full card of racing is scheduled for all four divisions along with the return of the Port-A-Potty Grand Prix.