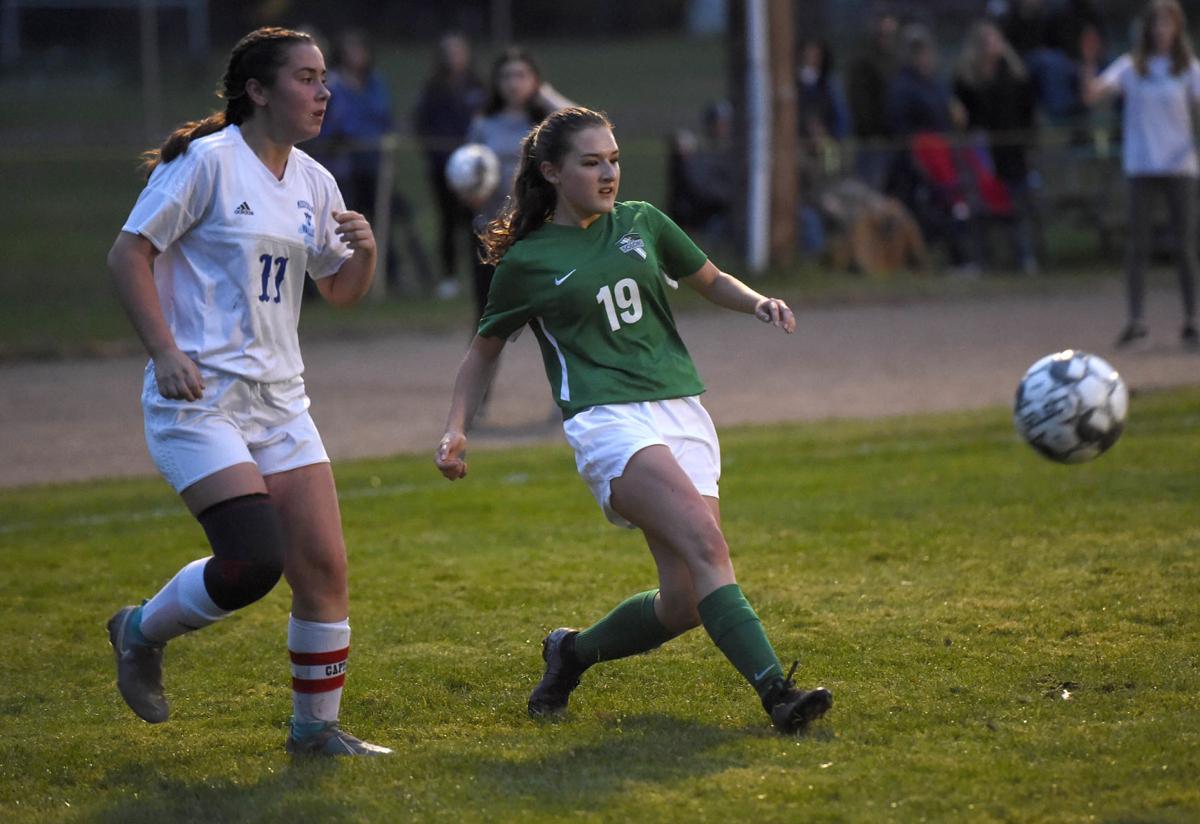 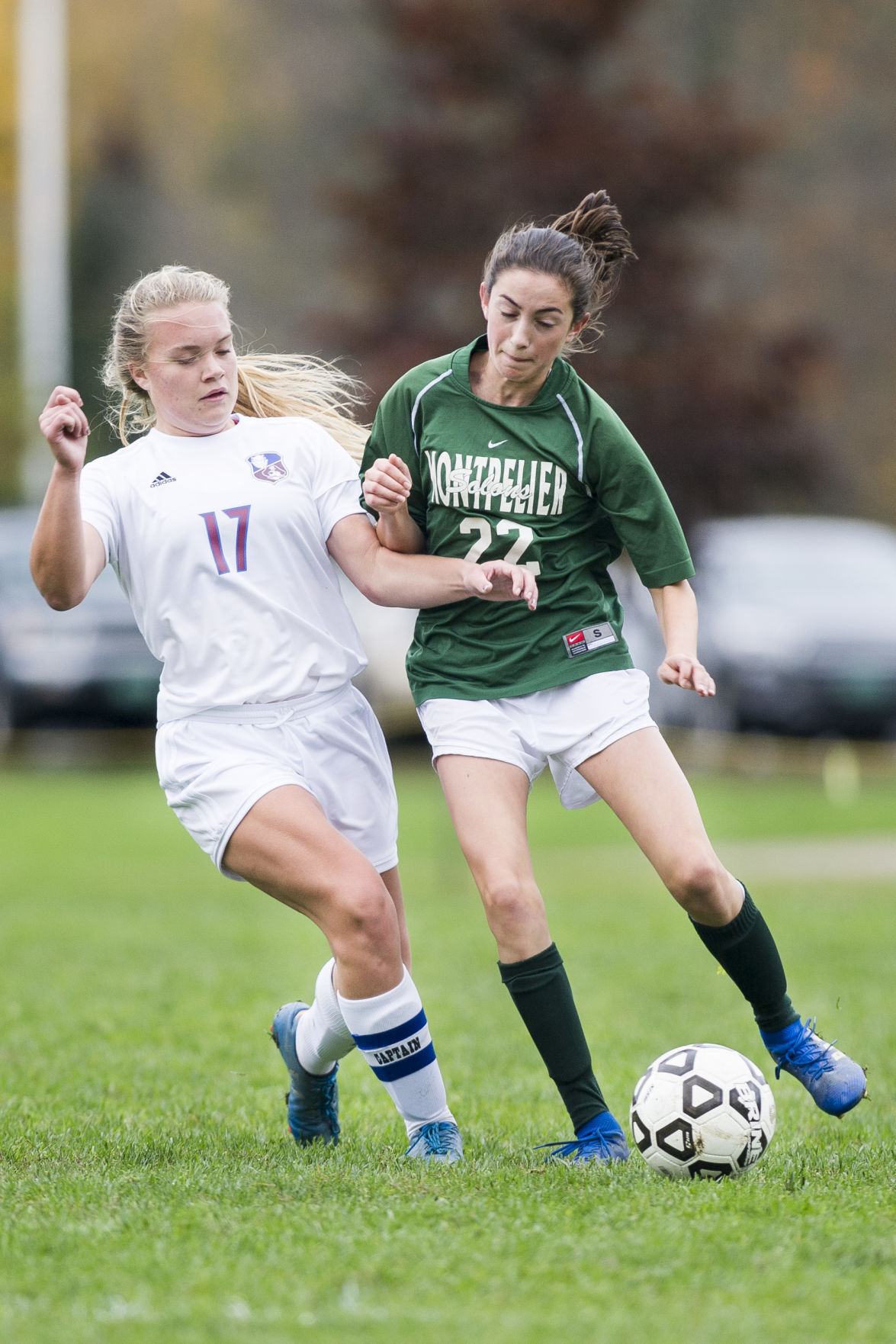 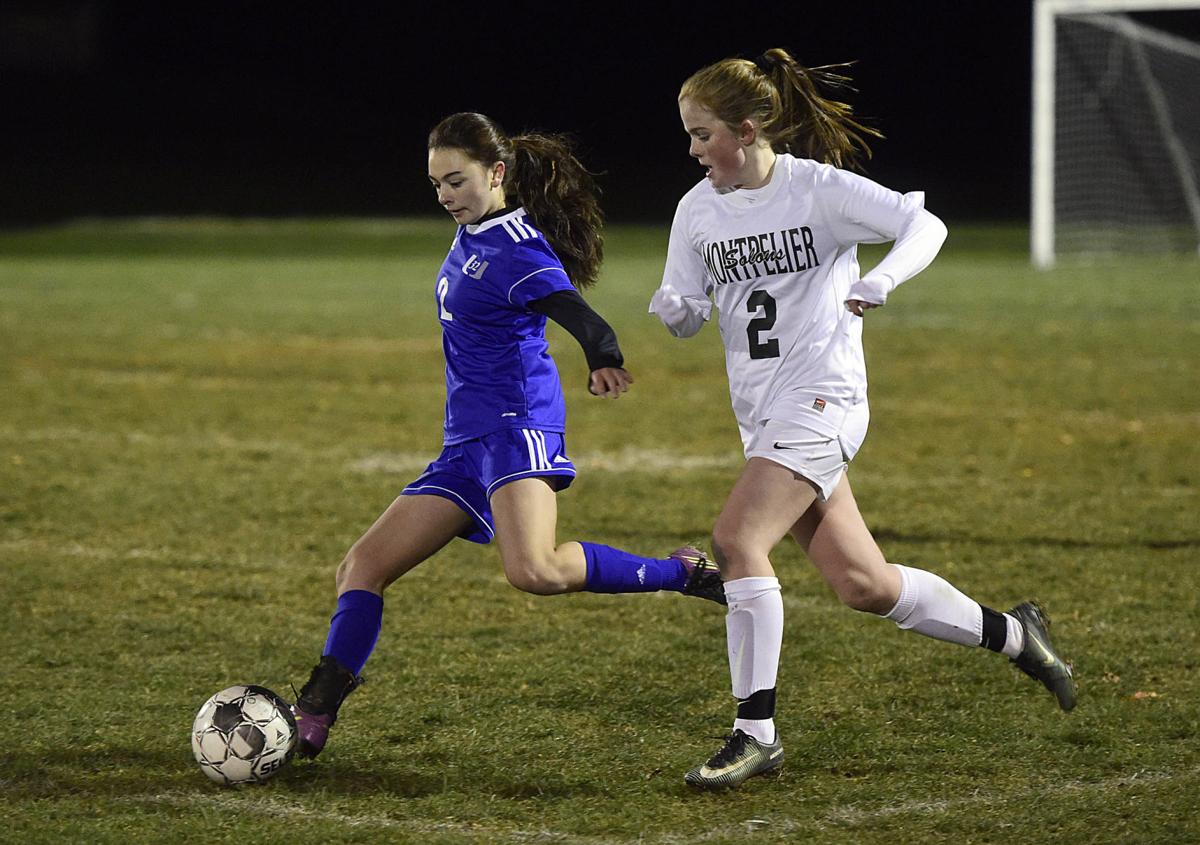 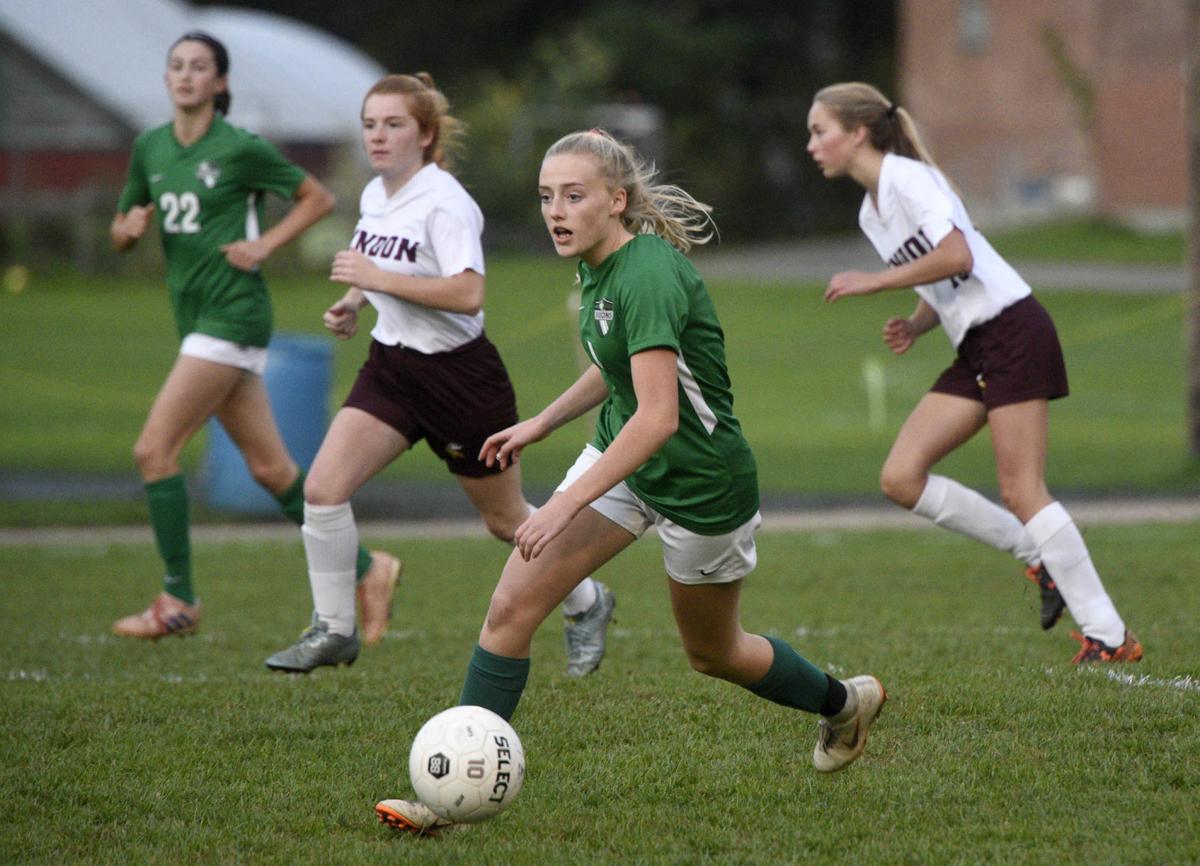 Montpelier’s Sienna Mills dribbles the ball during a girls soccer game against Lyndon.

Montpelier’s Sienna Mills dribbles the ball during a girls soccer game against Lyndon.

The lack of any juniors might be devastating to most programs, but a surplus of 12th- and 10th-graders gives the Solons a fighting chance against the best teams in Division II. Montpelier went 12-2-3 last fall and will attempt to record its 16th winning season in 17 years.

During one stretch last year the Solons rattled off 22 unanswered goals while holding opponents scoreless for nearly 700 straight minutes. Assembling a sturdy back line is the main mission for 2020 after Capital Division All-Stars Cypress Levitt and Jenna Krussman graduated last spring. Former goalie Georgia Schiff is focussing on ice hockey this year, creating another defensive void.

The positive news is that Sydney Dunn, Megan Krussman, Melanie Winters, Mia Preston, Sadie Smith and Lucia McCallum all return as seniors. And sophomore Sienna Mills is back after scoring a team-high 10 goals and dishing out five assists in 2019.

The Solons will host Lake Region on Oct. 2 in the season opener. An Oct. 7 match at Lyndon will be followed by a 6 p.m. home game Oct. 10 against Northfield-Williamstown. Montpelier will travel to play Harwood on Oct. 13 and will host Peoples Academy on Oct. 16. The team’s regular season will wrap up with an Oct. 22 game at GMVS and an Oct. 24 contest at U-32.

Since 1998, the Solons have only had two losing seasons: a 6-8-1 campaign in 2003 and a 6-7-2 season in 2014. The program has made 15 semifinals appearances and seven trips to the championship. Montpelier claimed its first crown in 2007 and cruised to an 8-0 victory in the 2012 title game. The Solons went undefeated during the regular season in 2008 and 2010, establishing a high bar for the next generation.

Megan Krussman is poised to start in the center of the midfield and will help out with some defensive chores as well. Winters and McCallum are also top contenders for starting midfield spots. Both have experience at wing, cover lots of territory and punish opponents in the attacking third.

Rand and Fuller could also make key contributions as midfielders, while Mills and Dunn are dangerous up top. Smith and Nostrant are central defenders who will work alongside a rotating crew of outside backs. Wawrzyniak and Stephens share goalie duties.

Here are eight questions for Englund as his team gets fired up for the fall:

TA: You had heard a little bit about the team, but what were some of your first thoughts during the opening week?

Englund: “It’s apparent that they have been well-coached. It’s very apparent that Montpelier is a soccer town and these girls have worked hard to get where they are.”

TA: Six of the seniors were on varsity last year. Did it feel like you had a pretty experienced group when you got here?

Englund: “Absolutely. It’s obvious that we graduated the two senior backs. That is the one spot that we’re going to have to work on: filling the roles of those two seniors that graduated. Other than that, all the the other seniors that are on the field have great leadership. And you can tell that they’ve played a lot of soccer. They know how to move the ball around the field. They know how to play well with each other. So it’s going to be fun.”

TA: With so many seniors and sophomores, has that been a good relationship? Does it feel like one big bunch?

Englund: “Yeah, it does. They all seem to get along really well. Other than some of the menial tasks — like who gets to carry the ball out to the field — I think everybody is treated pretty equally.”

TA: How would you rate the team’s overall fitness?

Englund: “It’s good. They were getting together as a group during the summertime with optional practices. And through that, they came into preseason in good shape.”

TA: Some of the seniors were probably used to playing certain positions the last year or two. Will those positions stay mostly the same?

Englund: “Absolutely. I don’t think we’ll switch that up too much. The trick will be trying to fill the void at the center back position. The defense is where we’re going to have to work things around a little bit. Other than that, I think that people will be in the spots where they’ve played before. It’s funny how with a new group, even when you’re not playing full-sided, you can tell who has played where. Just in small-sided games and the way they play in general, you can tell who’s used to what.”

TA: How is it going with the goalie situation?

Englund: “We have Mara and Isabella. Last year Isabella was the backup, and then this year Mara just stepped forward. They’re still picking up the craft, but I’m working as much as I can 1-on-1 with the two of them after practice. We have to put in some time and do some work.”

TA: “Does it seem like your formation is flexible?

Englund: “Yeah, I think there is some flexibility. Because they are good soccer players, a number of them could show well at different spots on the field. We plan to start with a 4-3-3 and we’ll see how that looks.”

TA: Do you have any other thoughts or early impressions after the first few weeks of preseason?

Englund: “It’s really fun to see that they work so well together and they really are an inclusive group. And that they’re soccer nuts. Especially because there is that big group of seniors, they’ve been working hard for a lot of years to get to the level that they’re at. Kudos to them and hopefully we can get them a good last season.”