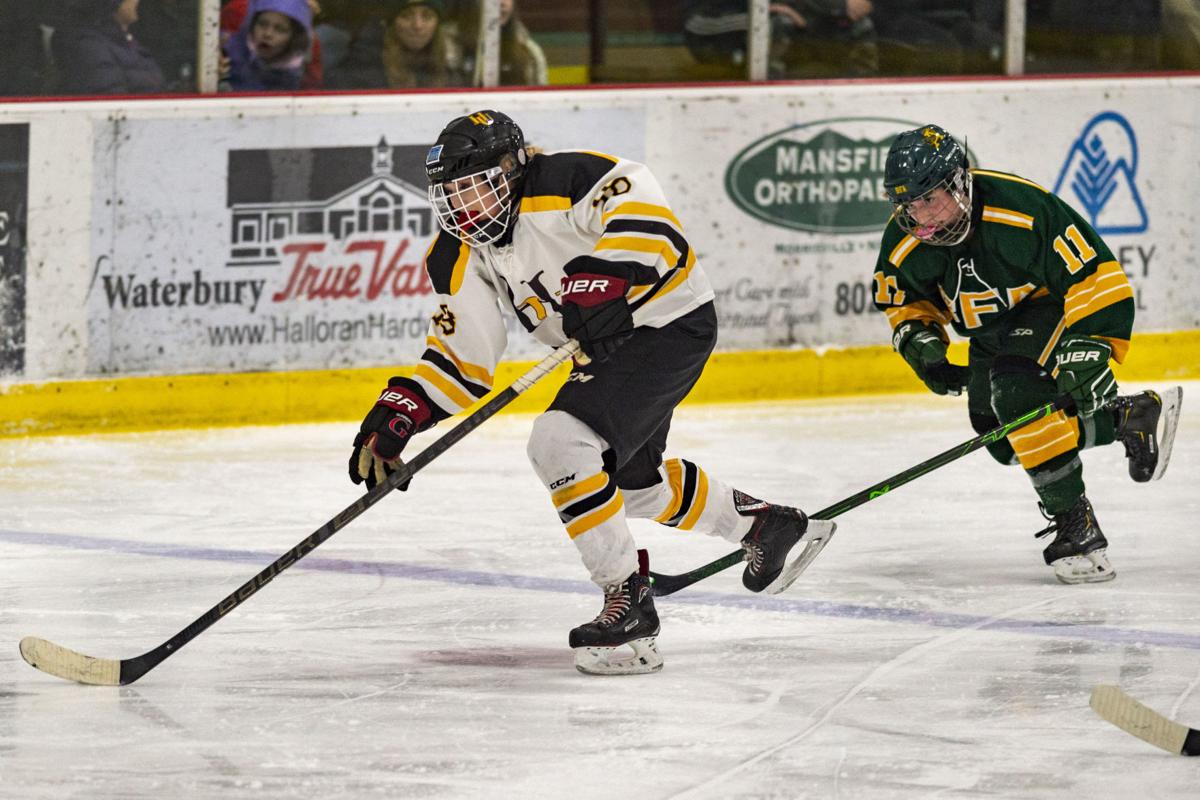 Harwood’s Clara Griffin skates toward the goal during a breakaway scoring chance while competing against BFA-St. Albans during girls hockey action last year in Waterbury. 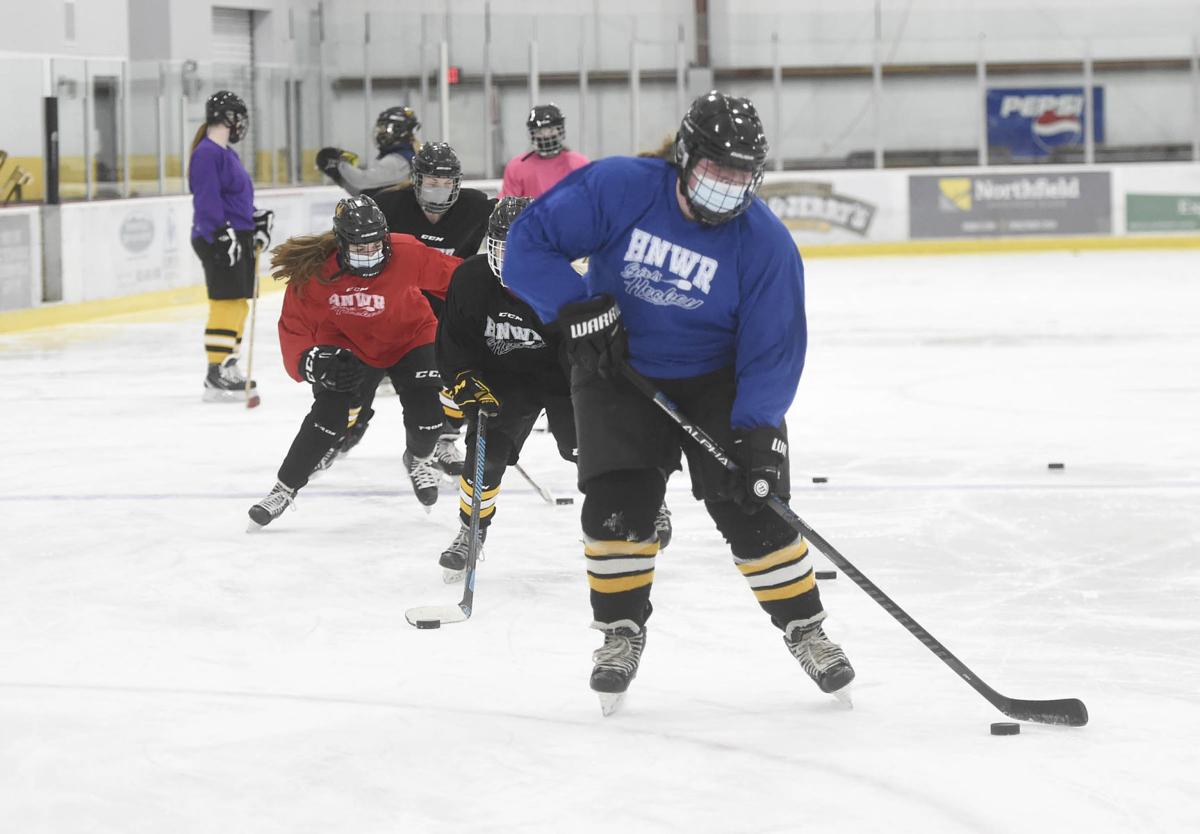 Harwood’s Clara Griffin skates toward the goal during a breakaway scoring chance while competing against BFA-St. Albans during girls hockey action last year in Waterbury.

Girls hockey programs across Vermont are struggling with numbers as a cloud of uncertainty hangs over the winter season.

In some areas, it takes a village just to field a full team.

The Highlanders are joining forces with Paine Mountain for the third straight year, carrying on the legacies of two powerhouse programs. Northfield advanced to nine semifinals and three championships from 2002 to 2018. Harwood played its first varsity season in 2006 and earned four semifinal berths in addition to a Division II championship.

Athletes from Williamstown and Northfield have excelled for Harwood, which draws talent from Waterbury, Moretown, Duxbury, Fayston, Waitsfield and Warren. Northfield went 7-10-1 its final year in 2018, while Harwood was 3-17-1.

The cooperative team made a strong debut in 2019, going 9-10-2 and advancing to the Division II semifinals. Last year’s 14-5-2 squad skated to a 2-0 quarterfinal win over Middlebury before falling to top-ranked BHS-Colchester, 4-2, in the D-I semifinals.

Vasseur is focussed first and foremost on rebuilding in 2021. His team is starting from scratch in some areas because of big graduation losses and a small turnout. What began as a marriage of convenience at the Waterbury Ice Center is now a union of necessity.

This year’s regular-season format is the same as last year’s, with teams placed in either Tier 1, 2 or 3. The Tier 2 teams play opponents at every level. Tier 1 teams do not face many Tier 3 opponents in order to improve the quality and enjoyment level of games for players and fans.

All Tier 1 teams compete in Division I for the post-season. Coaches will place a limited number of the most successful Tier 2 schools in D-I for playoffs. The remainder of the Tier 2 squads will join all of the Tier 3 field in the Division II post-season.

The Division I contenders last winter were South Burlington, Rutland, Rice, Middlebury, Harwood, Essex, BFA-St. Albans and BHS-Colchester. The Hornets secured their eighth championship with a 4-2 victory over BHS-Colchester. The Comets have advanced to 15 finals in 19 years, claiming 10th crowns.

Teams in the D-II field were Hartford, Burr & Burton, Brattleboro, Stowe, Woodstock, U-32, CVU, Missisquoi, Spaulding and the Kingdom Blades. The Crimson Tide won it all with a 4-0 victory over CVU.

The Blades and BHS-Colchester have shown lots of potential as cooperative programs, securing a top-three seed for playoffs the past two years. The merger between Stowe and Peoples paid off in 2018 when the Raiders and Wolves outscored playoff opponents 16-0 en route to winning the D-II crown. Montpelier’s last season was in 2011, but since then many Solons have skated for two-time champ U-32.

Vasseur’s team advanced to the D-II championship in 2011 and claimed its only title in 2013 with a 2-1 victory over North Country. Hayley Martini scored the game-winner in overtime and goalie Siena Damon stopped 17 shots.

Here are a handful of questions for the HU coach as teams await approval from state officials to begin competition:

TA: How is stuff coming together in preseason? Just slow and steady?

Vasseur: “Everything is going pretty well. The kids are having fun and they’re excited to be back on the ice. We have a very mixed group. We have five or six kids with a lot of experience, and then we’re learning to skate. Molly Yacovoni and Hailey Brickey will be two of our go-to defensemen, and Kaylee Cameron will be back as a goalie. She lost all last season to an injury from field hockey and she is still coming off her rehab. But she always tries really hard and she’s improved every year.”

TA: What are the big differences for your team now that you can have contact in practices?

Vasseur: “For the first week you weren’t allowed any scrimmaging or anything. So it was all just purely personal skills. And a lot of times you don’t spend as much time on those, particularly at a varsity level. So you actually had some forced edge work, some forced individual puck-handling and those sort of things.”

TA: Has there been some discussion with the hockey committee or anyone about how the actual schedules will look?

Vasseur: “I think the schedule was already pretty much set. They split it into three divisions. Now there’s not as many teams that are definitely D-I. There are a whole bunch that are in Tier 2, and then very few that are in the bottom tier. So it’s similar but very different this year. And I don’t know how they’re really going to do it toward the end. Say you only have six games, but they’re all played against some of the weaker teams. Are they going to push you up to Division I? It’s not like you have 20 games to play everybody and see where you really belong. That’s gone. So if we play is one question. And who are you going to play if things come around? I’m assuming you’re just going to pick up the schedule wherever it is. If we miss 14 games, then there’s six games left and this is who you’re going to play. Well say those six games are against teams like Essex and BFA. So we just don’t know how these things are going to work out and how quickly they’re going to make a decision. Hockey is fairly safe compared to some of the sports. And the outdoor sports are probably even safer. I think what coaches need to concentrate on now is good exercise and good times. We just have to make it fun.”

TA: Now that we’re a few years into the three-tier format, how would you grade it? You guys have been the guinea pigs, but has it worked?

Vasseur: “I think it has. The only real exception was Spaulding last year. They should have been in the middle tier, not the third tier. And that was an aberration because they suddenly got the best player in the state and they got some other players that came along. It was just the perfect storm. As far as us, we got moved up to D-I a couple times. But quite honestly, last year we were one period away from going to the state championship. We were in the right spot. We didn’t win, but we were in the right grouping. It’s glorious to win a state championship. But if you have one of the two or three best teams in the state, and you’re going to the Division II state championship, that’s not where you belong. We’re fighting to keep programs afloat, so we need it to be competitive and fun. And what people don’t sometimes understand is that, for BFA and Essex, it’s no fun for them to go play somebody who they beat badly. So I think the committee has done a good job of making it competitive. Last year our second game against Spaulding was an incredibly fun and competitive game. They beat us, but it was a great game. And that’s what people are looking for. Who wants to drive 2 hours on the bus and say, ‘Well, only the third and fourth lines are going to play today.’ And we’re rebuilding this year. We lost a lot.”