Skip to main content
You are the owner of this article.
Edit Article Add New Article
You have permission to edit this article.
Edit
Welcome, Guest
Home
News
Obituaries
Opinion
Sports
Features
Community
Classifieds
1 of 7 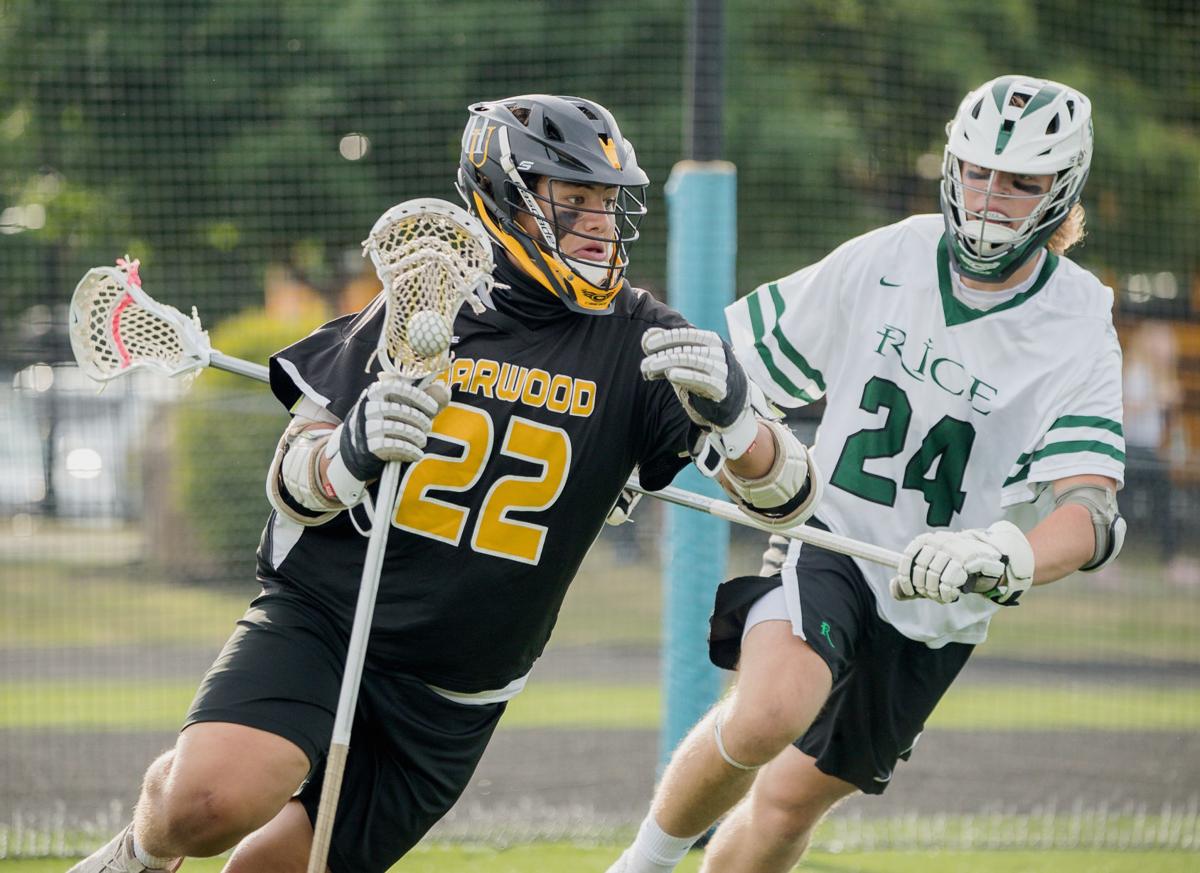 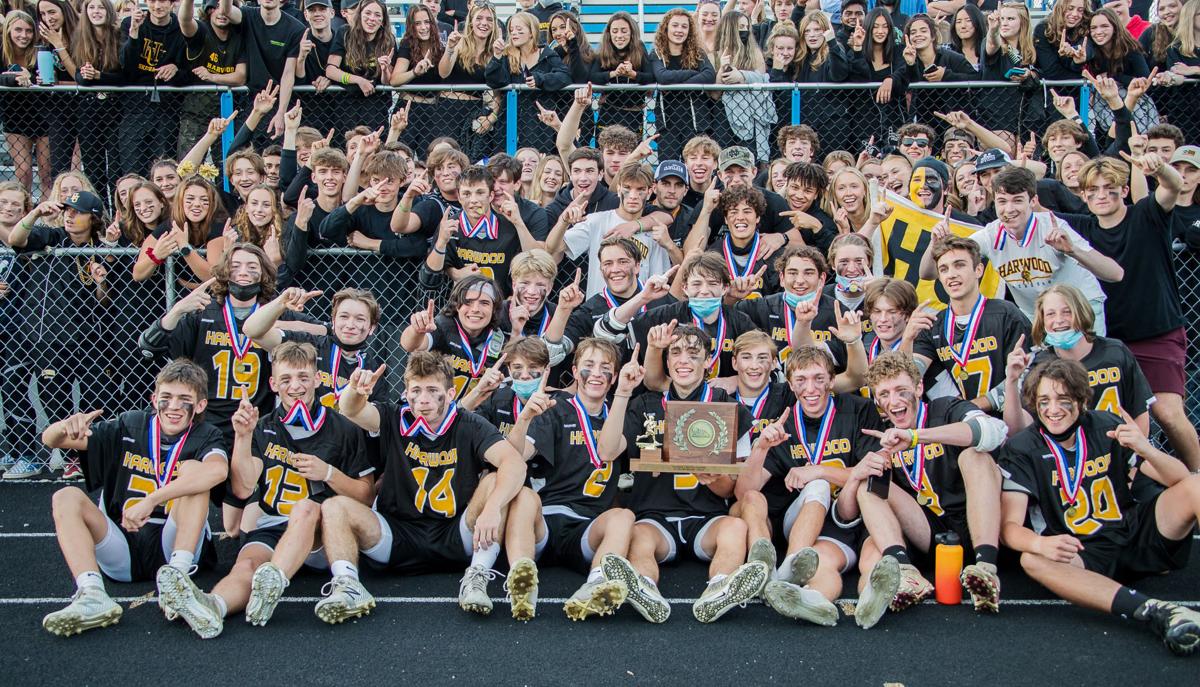 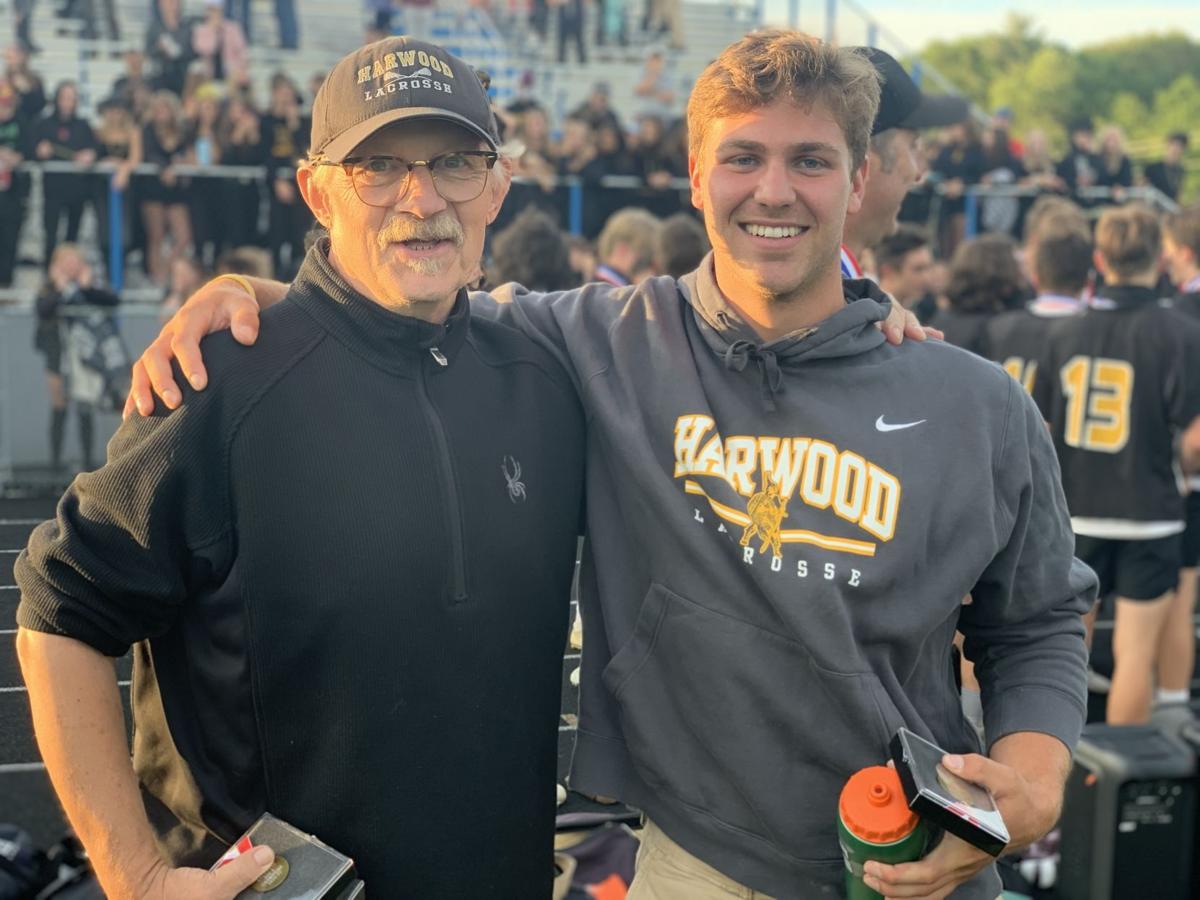 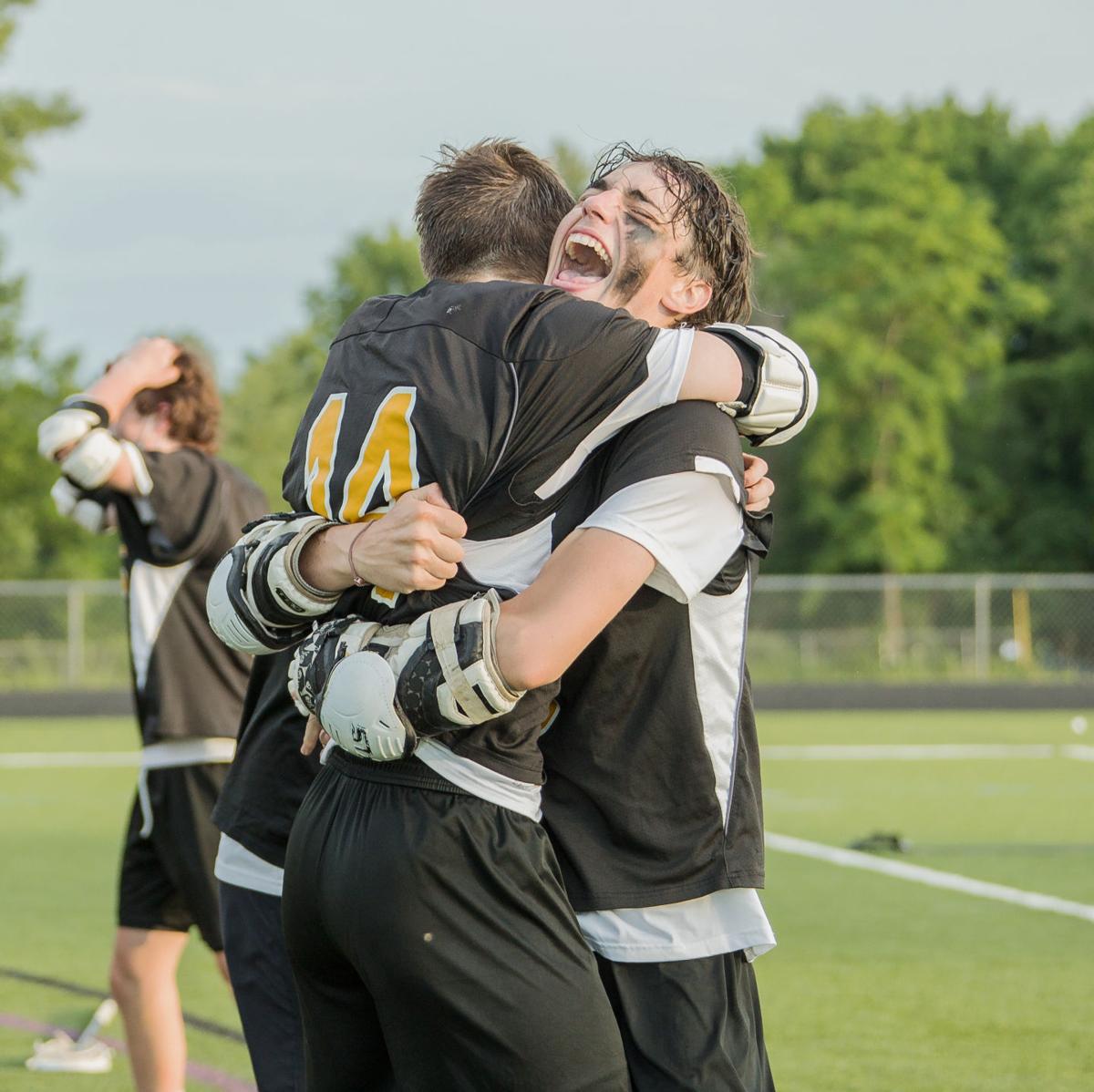 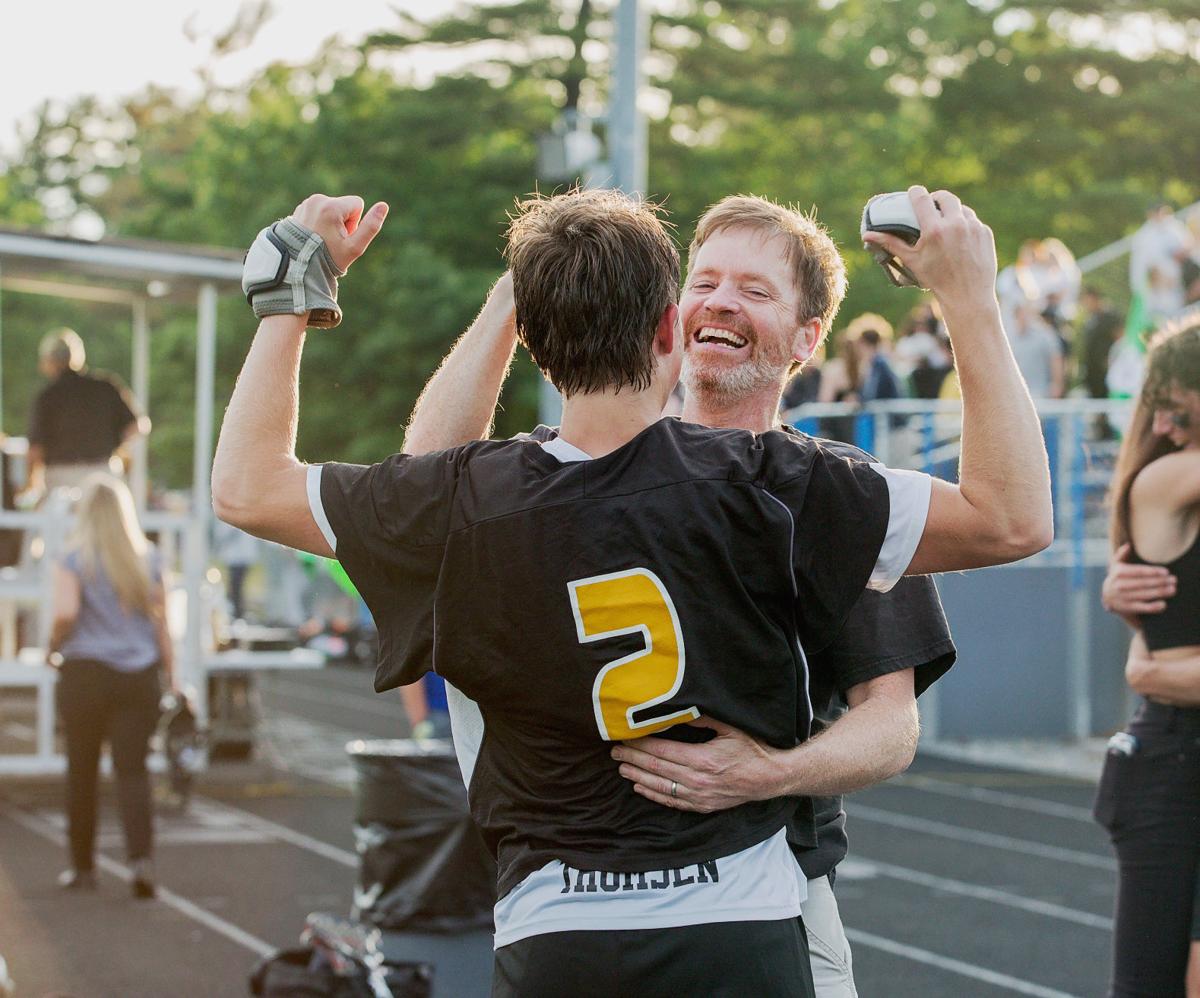 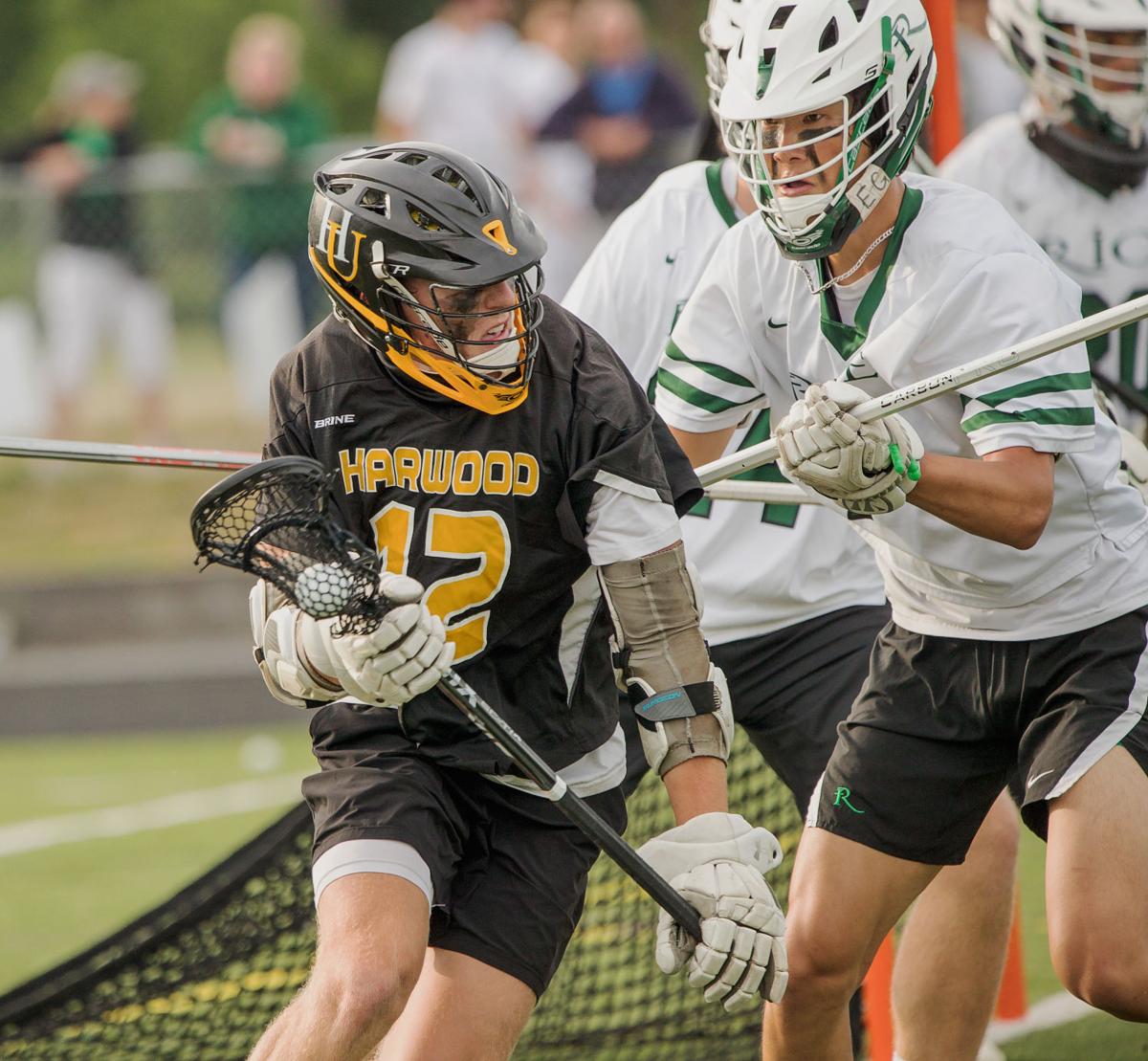 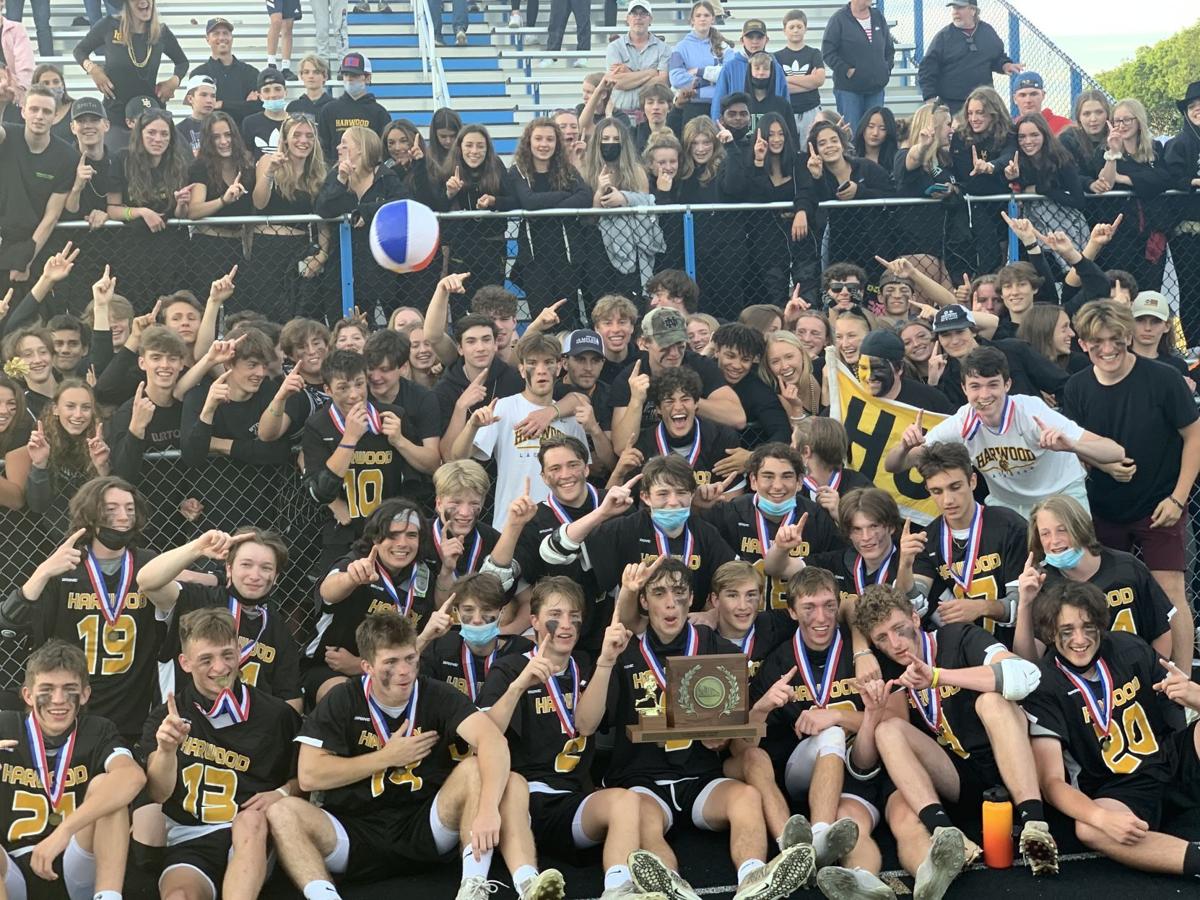 SOUTH BURLINGTON — Losing to Rice late in the regular season may have been the best thing that happened to the Harwood boys lacrosse team.

The Highlanders know a thing or two about being knocked down, and they’re experts at getting right back up.

Hat tricks by Cam Forbes and Jordan Grimaldi combined with 13 saves by goalie Addison Dietz formed the perfect recipe for payback during Friday’s Division II state championship. Second-seeded Harwood (12-2) used a zone defense to build a six-goal halftime cushion and held on for an 11-7 victory over No. 1 Rice (12-1).

“The most dangerous animal is the one that has nothing to lose, and that’s how we approached the game,” Harwood coach Russell Beilke said. “No one really gave us a shot. All the pundits and everyone said it was going to be Rice’s thing: They were undefeated. And granted, they had a great year. With that, we had a chip on our shoulder. We went up there and were beaten before. And we took that — and everything we did, we adapted because of the possibility of playing that team in the finals.”

“It’s great to win and today was really a team effort: We had so many guys step up,” O’Hara said. “Two guys had hat tricks that don’t usually score that often and we just played an all-around great game. Our fourth quarter was sloppy. But when you build a lead like that, you can give up some time and some goals.”

Graham Harris and Ty Samson scored three goals apiece for Rice. Jackson Harris (one goal, three assists) and David Gosselin (two assists) were two more offensive weapons in the loss and teammate Logan Lambrecht made nine saves in front of the cage. The Green Knights trailed 3-1 after the first quarter and faced a 6-2 halftime deficit. Harwood led 9-3 after three quarters.

“We couldn’t have won this game without that first quarter,” Dietz said. “The fact that we were able to only allow one goal there and just shut them down. We came out with a defense they’d never seen and they couldn’t solve it.”

The Highlanders avenged their 14-11 regular-season loss to Green Knights. Switching to a zone defense helped HU catch Rice by surprise at the start. The Green Knights fired home four goals in a four-minute span during the final quarter, but they were still held to their lowest scoring total of the season.

“Gavin Thomsen is easily the best (long) pole in the state,” Dietz said. “To have that guy in front of you is insane. Grant McCracken as a (long-stick middie) is just absolutely ridiculous: The kid doesn’t stop working. And just all of our poles: Jack Lansky, Iyah Lavit, Steve (Valadakis) and Lucas (Wilcox) — we’re all pushing each other to be better.”

The Highlanders captured their third title in program history after going all the way in 2010 and 2018. Friday marked the fourth season in a row that HU played for a boys lacrosse crown.

“I think championship experience is so huge,” O’Hara said. “I know they have a freshman goalie, and he played great. But it’s hard to step up as a freshman in a championship game. It’s a crazy environment. I think the depth we have and the experience we have really played a huge factor tonight.”

The Green Knights grabbed a 1-0 lead with 10:24 left in the first quarter when Garrett Micciche assisted Samson. Rice attempted to double the lead, but Lavit stole the ball to give his team an early jolt of energy. O’Hara cut in front of the goal mouth and tucked away the equalizer 21 seconds later.

Dietz delivered a nice scoop save to spoil Rice’s next offensive charge, and Green made the most of the opportunity by cashing in on attack for a 2-1 lead with 8:07 on the clock.

“I do my best just to get in the way of the ball,” Dietz said. “I’m not the most conventional goalie, but it seems to work when it’s needed.”

Harwood’s Brian Bechtel grabbed a ground ball midway through the quarter and then O’Hara assisted Simmons to cap a series a quick passes. The shot with 5:49 left in the opening quarter was enough for HU to carry a 3-1 lead into the second quarter.

O’Hara set up Forbes on their team’s first possession of the third quarter, extending the lead to 7-2. Jackson Harris found Graham Harris for a close-range shot outside the left post with 9:11 left in the quarter. A stick save by Dietz denied Samson with eight minutes left in the third quarter.

“Addison, this year, has stepped it up like no one else has stepped it up — it’s ridiculous,” O’Hara said. “Our whole defense, we came into this game so prepared. We had zone defense, and in the first three quarters Rice had no answer to it. In the fourth quarter, they finally figured it out. But our offense was clicking. We came prepared and it was a great.”

Forbes scored on a long-range shot from the right side a minute later for an 8-3 advantage. Lavit made a goal-saving block with his long pole while Dietz was out of position to maintain the momentum. Thomsen, Green and McCracken kept up the intensity by using a triple-team to stop Jackson Harris in his tracks on a gritty scoring attempt.

The Green Knights nearly made a routine defensive stop at the other end, but Forbes followed up the play with a hard-charging effort outside the right post as the ball was rolling back toward Lambrecht. Rice made a hurried attempt to clear the threat out of harm’s way, but an opportunistic Grimaldi knocked the ball across the goal line from point-blank range for a 9-3 lead.

O’Hara hit the post with two minutes left in the quarter and HU led 9-3 entering the fourth. Graham Harris deposited the ball into the back of the net with 8:01 remaining, making it 9-4. The Green Knights won the ensuing face-off, preventing Harwood from stalling offensively.

A pass from behind the net by Jackson Harris allowed Samson to score on a bounce shot from in close with 7:16 left to play. The Highlanders called a timeout while nursing a 9-5 advantage.

Jackson Harris assisted Graham Harris with 6:39 on the clock, setting off a chorus of cheers from the home crowd with Harwood leading 9-6. Harwood won the next face-off, but Lambrecht made an easy save on a low-percentage shot in transition.

Simmons assisted Grimaldi for a fast-break goal with 4:09 remaining, but Samson countered with a goal 15 seconds later. O’Hara won a ground ball to stymie the Rice attack and then Lavit made a head’s-up defensive play to dispossess the Green Knights down the stretch.

“We communicate really well and we’ve really bonded as a defensive unit,” Dietz said. “I’m excited to see what we can also bring next year.”

O’Hara scored the final goal with 2:56 left to play, capping a tremendous career at HU. The three-sport standout plans to attend the Holderness School in New Hampshire for his senior year.

“This whole day has been pretty emotional with the last day of school and we had an end-of-the-year assembly,” O’Hara said. “And it just felt like it was a Harwood day. We got it done tonight and there’s no better feeling.”

The championship victory was long-awaited for O’Hara and several of his teammates who also play soccer and hockey. The Highlanders suffered a quarterfinal loss to Montpelier during the soccer quarterfinals following two rounds of penalty kicks. Harwood fell short in the hockey finals against Brattleboro.

“We got it back,” Beilke said. “The last sport to be played for Harwood brings home the ‘Ship.”

“It doesn’t get better than Russ,” O’Hara said. “He brings the humor and character to the team. Lorne Thomsen and Drew Simmons, they stepped up huge this year. At night, they were studying film and going over game plans.They just had us coached up so perfectly. Out of all four (straight) championships we’ve been to, this is the most prepared we’ve ever been. And it shows on the scoreboard.”