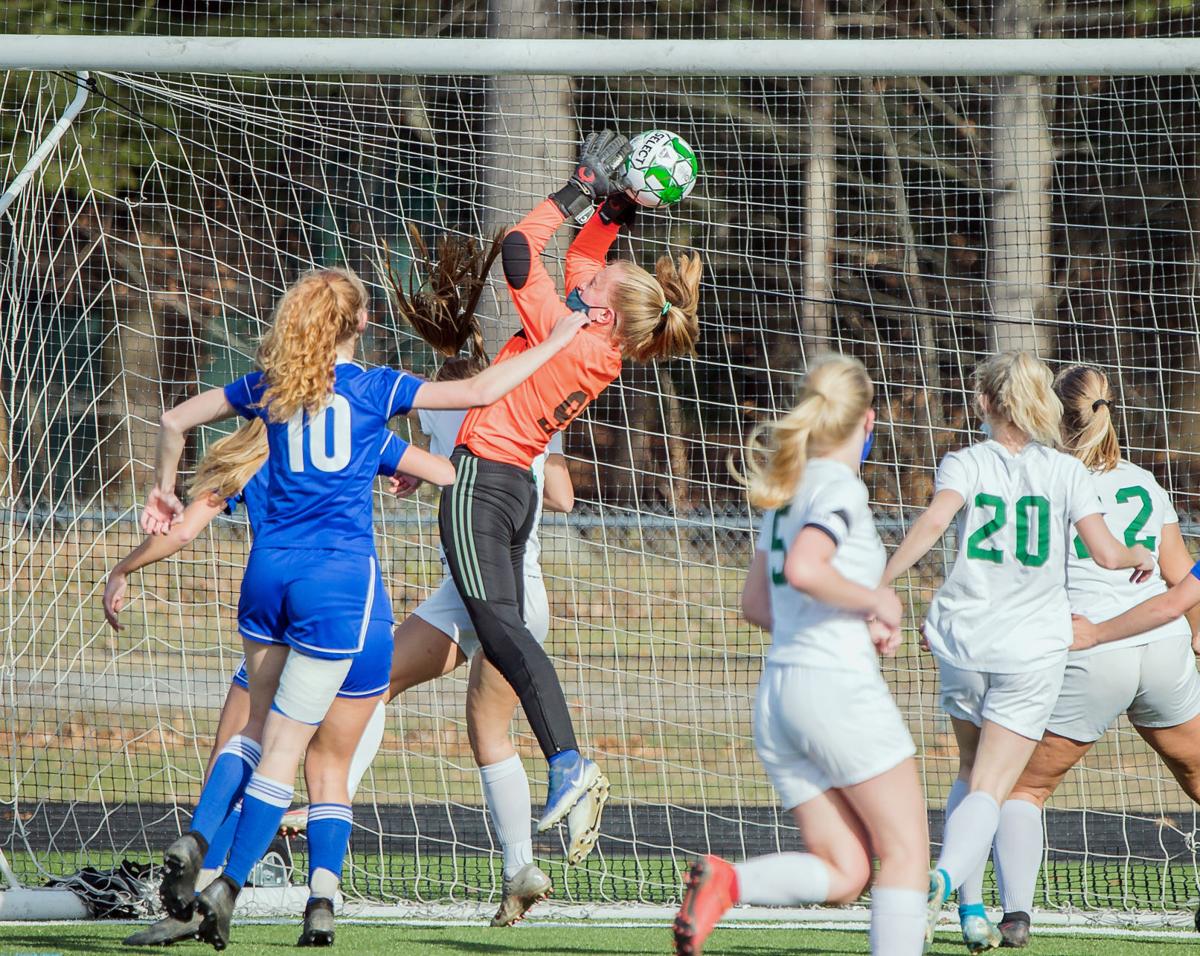 U-32 goalie Evie Moore makes a save while teammate Eliza Garland backs up the play during Saturday’s Division II girls soccer championship victory over Rice. 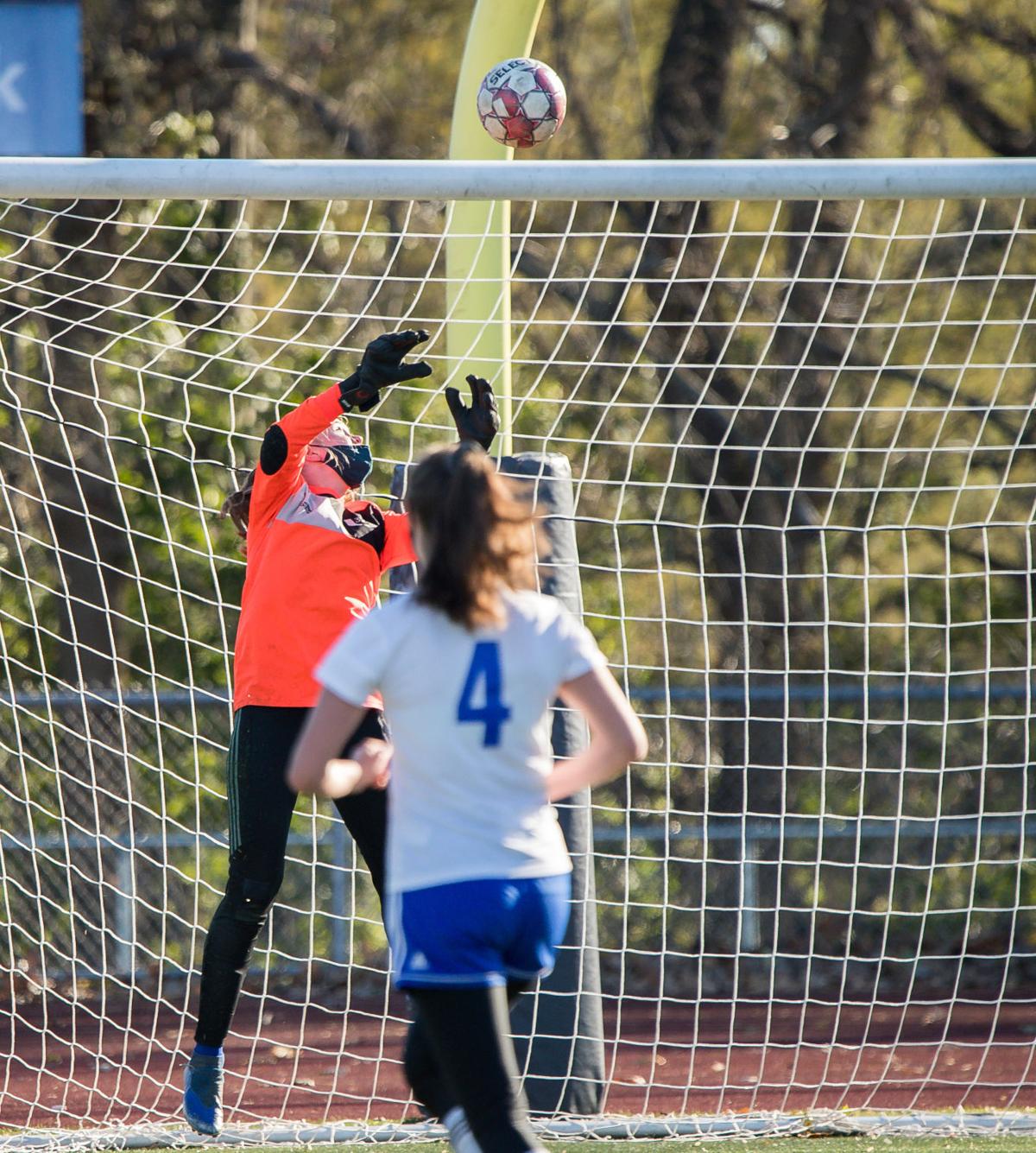 U-32 goalie Evie Moore makes a save while teammate Tovah Williams follows up the play during the Raiders’ 2-0 semifinal victory over Harwood.

U-32 goalie Evie Moore makes a save while teammate Eliza Garland backs up the play during Saturday’s Division II girls soccer championship victory over Rice.

U-32 goalie Evie Moore makes a save while teammate Tovah Williams follows up the play during the Raiders’ 2-0 semifinal victory over Harwood.

EAST MONTPELIER — U-32 has been one of the most consistently successful teams in Division II girls soccer, making 10 semifinal appearances in the past three decades.

For all of the Raiders’ dominance, the program struggled to overcome a post-season rut. U-32 was eliminated by Milton seven times in the playoffs, dating back to championship losses in 1992 and 1993 under coach Bill Deforge.

This year coach Steve Towne could have easily thrown out the playbook in search of a winning formula. As it turns out, the Raiders stuck to what they do best and finally finished the job.

Led by top-notch goaltending and 1-on-1 defensive marks, U-32 captured its first title in program history with a 2-1 victory over defending champ Rice. The Raiders tallied 13 unanswered goals in the playoffs, with keeper Evie Moore recording her eighth shutout during the semifinals.

The Green Knights established a huge territorial advantage early in the final, but Towne’s team relied on its defensive fortress and a counterattacking spirit. The strategy paid off when seniors Caroline Kirby and Sasha Kennedy buried goals against the run of play, sparking a long-awaited victory after too many close calls.

The old saying about defense winning championships finally rang true for U-32.

“Rice possessed until about 30 or 35 yards,” Towne said. “And that’s where the defense stepped and held their line.”

Towne employed a similar method of patiently riding things out while leading the U-32 boys to championships in 2005, 2006 and 2015. He switched back over to the girls’ side in 2018, guiding the Raiders to nine shutout victories and a 12-4-1 record. A semifinal clash with 16-time champ Milton ended with a 2-1 loss following a disputed goal in overtime.

U-32 opened the 2019 season with seven straight victories, including wins over Harwood and Rice. The top-seeded Raiders earned a first-round bye in the playoffs and finished at 12-3 after falling to the No. 9 Green Knights in the quarterfinals. With nine seniors returning for a COVID-shortened 2020 campaign, Towne had an early sense that something special was brewing.

“Last year we were able to get Eliza Garland back out and Jordan Pryce, who are obviously key aspects to this (championship) win,” Towne said. “They’re defensive players and just solid athletes. I love the three-sport athletes. It seems like there’s less and less of them. But they understand angles, they understand defensive responsibilities and it transfers over.”

Caitlin Chevalier, Ireland Hayes, Kallista Parton, Payton Gariboldi and Claire Obeldobel rounded out one of the most talented senior groups in Vermont. Moore and the defense were a year older and a year wiser, but finding cohesion took extra time because school regulations prohibited freshmen and sophomores from practicing with junior and seniors. The Raiders started training and playing games a week later than most schools, with Towne working with separate pods of players at week-to-week intervals.

“It was really hard alternating because we couldn’t work as a team and know what each player was doing,” Gariboldi said. “And then when we practiced on our own, it wasn’t the same level as what we would have with our coach.”

“My defense is incredible — they’re amazing players,” Moore said. “(Gariboldi) knows where to be and she’s always coming in and backing up and adjusting, depending on what’s happening. It’s amazing having her back there.”

U-32 kicked off the season with a 5-1 victory over Northfield-Williamstown and an 8-1 win over Peoples. The Raiders allowed both goals with the game already in hand. A 2-0 victory over eventual D-III champ Stowe set off a string of five straight shutouts. The Raiders buried over 20 unanswered goals during that run, putting a hurt on North Country, Lamoille, Randolph and Lake Region.

“We knew that we could do it, so we were just working toward doing it,” Obeldobel said. “And Evie is so solid in the back this year. She’s just does so well and we trust her so much. She’s incredible and she stops everything.”

The Raiders were in control of their regular-season finale through the first 61 minutes, leading 1-0 after Kirby scored her 21st goal of the season early in the match. But a fast-break goal by Sienna Mills evened things up and Solons striker Melanie Winters scored the game-winner with 10 seconds remaining.

“Losing that Montpelier game is when I started making some shifts,” Towne said. “Ireland had been a central defender with Payton, but I moved her out of there to try and support mid. And, honestly, the best thing I did was separate the two of them. Because defensively they’re both so solid. And Ireland was able to step into mid and do what she did in the back. So it was a huge key.”

U-32 opened playoffs with a 5-0 victory over Mount Abraham. A 4-0 quarterfinal victory over Milton ended the Raiders’ 0-7 winless streak against the Yellowjackets in the post-season. Garland made a goal-line clearance during the first half of the semifinal and Moore held on late to close out a 2-0 victory over Harwood. Garland, Hayes and Knauss had marks at all times during the final, with Garland keeping a close eye on Rice striker Laura Hoak.

“(Hoak) has a monster shot,” Moore said. “And we knew going in that she was going to be a solid player. We were watching her the whole time. Eliza was supposed to mark on her and she did a really good job with that.”

The Raiders also stalked their opponents in the center of the pitch. Obeldobel played multiple positions and took a few shifts shadowing Rice freshman Izzy Bloom.

“We like to mark in the midfield,” Obeldobel said. “It helps us control it better, because we’ve just always got someone on the ball and pressing. That’s one of the things that we’ve always worked on this whole season, so we really wanted to keep that tight so that we could pull out a win. …I was marking (Bloom), and then I was sitting back after they scored so that we could keep getting the ball up the field. So that they wouldn’t have any opportunities.”

Moore finished with six saves in the championship, making her toughest stops early in the match. After thwarting Hoak on a long shot through traffic, the U-32 junior led her defenders during the final minutes like a seasoned pro.

“We had a numbers of chances in the first half and we missed opportunities when we had those counters,” Towne said. “And really the idea there was we weren’t going to possess probably in the midfield, but we don’t want them to possess. It was going to be a back-and-forth game — we knew that coming in. And it was a tough position for Evie when you’re waiting, waiting, waiting — and then shots come in. And you have to hold onto them. She did a great job against Harwood and again today holding onto the ball and not giving them those second-chance opportunities.”

Next fall could be a rebuilding year, but chances are the U-32 players will still be charged up from their 2020 run. Following three decades of progress and near misses, a championship banner will finally hang from the rafters in East Montpelier.

“We overcame a lot to be here,” Moore said.