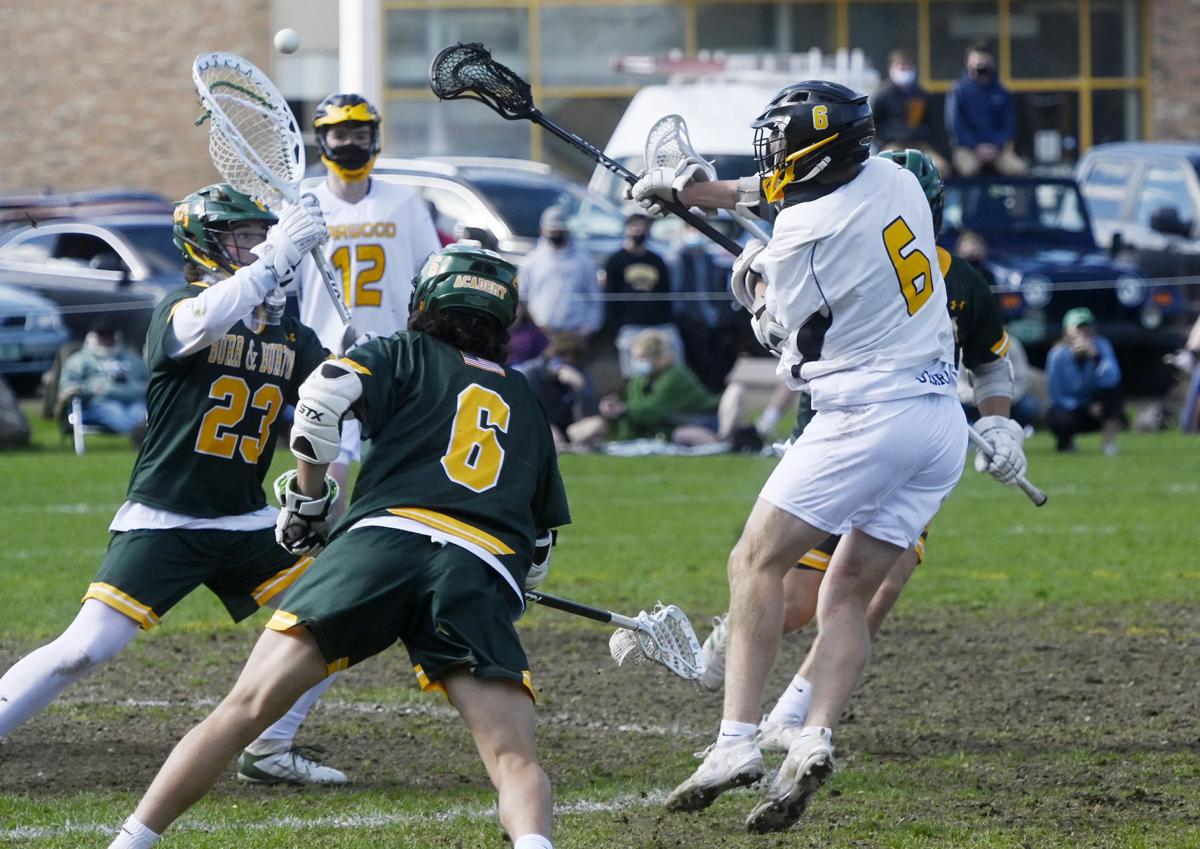 Harwood’s Finn O’Hara fires a shot past the Burr & Burton goalie during the first half of their boys lacrosse game Thursday. 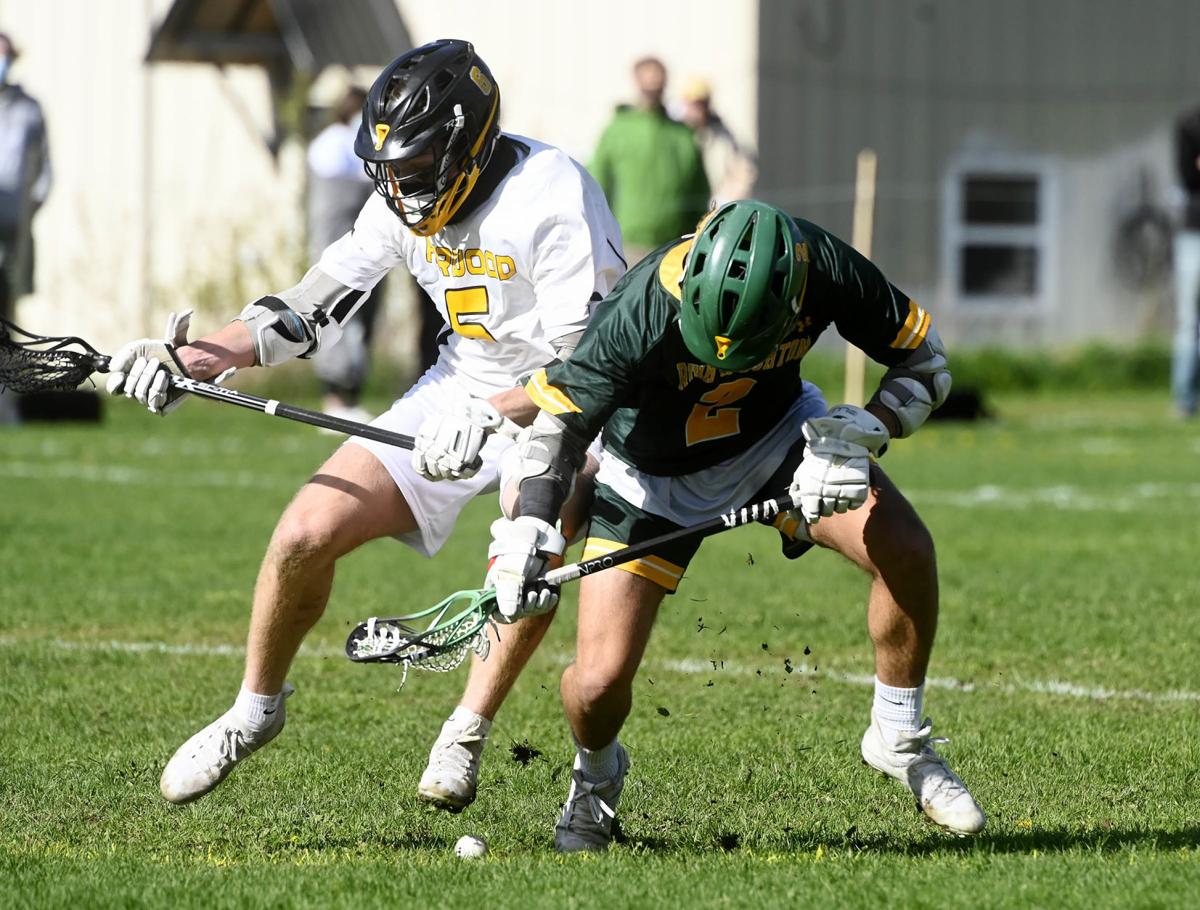 Harwood’s Jackson Wade battles for the ball with Burr & Burton’s Duncan Chamberlain during the first half of their game Thursday. 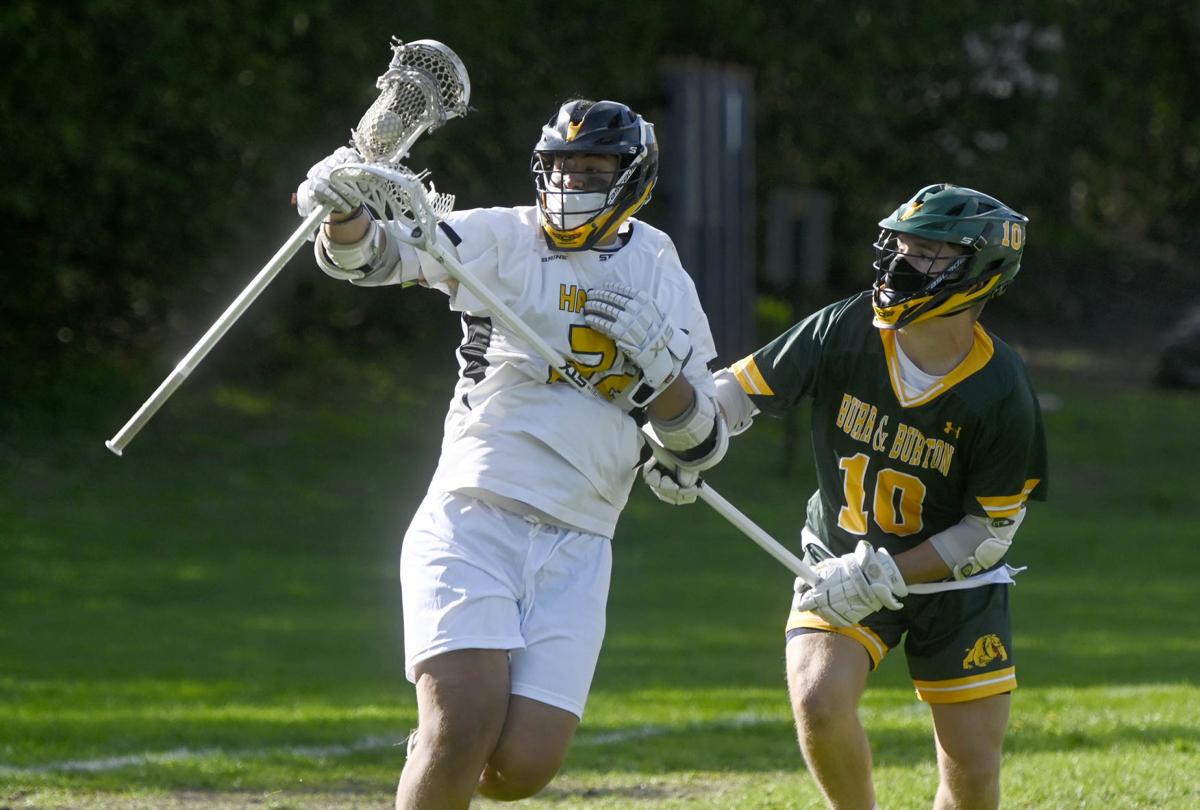 Harwood’s Jordan Grimaldi, left, controls the ball as Burr & Burton’s Judd Gourley defends during the first half of their boys lacrose game Thursday.

Harwood’s Finn O’Hara fires a shot past the Burr & Burton goalie during the first half of their boys lacrosse game Thursday.

Harwood’s Jackson Wade battles for the ball with Burr & Burton’s Duncan Chamberlain during the first half of their game Thursday.

Harwood’s Jordan Grimaldi, left, controls the ball as Burr & Burton’s Judd Gourley defends during the first half of their boys lacrose game Thursday.

DUXBURY — Division I powerhouse Burr & Burton and D-II behemoth Harwood both got the challenge they were looking for during Thursday’s boys lacrosse battle.

The Bulldogs also earned the desired result, prevailing 8-6 to make a round-trip bus ride of four hours worth the effort.

“That’s debatably the best team in D-I,” Harwood junior Finn O’Hara said. “We just lost to them 8-6. And without that first quarter, we held them to five goals in three quarters. So a huge shoutout to our defense. And it was a great game from all of us.”

“They’re a very well-coached team and they gave their defense a break,” O’Hara said of the Bulldogs. “When they got the ball on offense, they held it for a minute, two minutes — even sometimes three. They got the right look and capitalized on it.”

Edwards tallied two goals and one assist in the first quarter to help the Bulldogs open up a 3-0 lead. O’Hara scored twice in the second quarter and Gavin Thomsen also found the back of the cage.

Burr & Burton led 4-3 at halftime before Edwards added two more third-quarter goals. The Highlanders trailed 7-4 entering the final 12 minutes. BBA used a combination of offensive patience and defensive discipline to drain the clock at the end.

“It was a really good game with the way Harwood stuck in there,” BBA coach Thomas Grabher said. “The two-minute locked-in penalty got them right back in it with two goals. There was a stick check at the timeout and the stick was illegal. So it shows the potential they have. Because in the beginning, we were owning possession and they didn’t have many possessions at all. But on the man-up that they had, they had the ball and they knew what to do with it. They scored two goals and that put it right back to 4-2. So they had the momentum and energy on their side. And then it was just scratch and claw the whole way, back and forth, us and them. And fortunately we came out on top.”

“All year-long, we haven’t started off quickly,” Harwood coach Russ Beilke said. “It takes us a quarter. And not to take anything away from those guys. Because if they’re not one of the top three teams in D-I, they’re right up there. They do everything really well, they’re aggressive and they have a lot of bodies. So all those things really help to get up and going. They’ve got more games under their belt, and we’re still in that process.”

Jon O’Brien finished with one goal and one assist for HU. Sawyer Simmons (two assists) and Pacie McGrath (one assist) also contributed to the Highlanders’ attack.

“We’re a young team in a lot of aspects,” Beilke said. “We have some very seasoned players, but we also have some unseasoned players with a lack of experience due to last year’s closure. Obviously that hurt the seniors, and it hurt all players. But it really hurt the freshmen that didn’t get a year playing at the next level. And there’s a big leap between seventh- and eighth-grade lacrosse to varsity and JV lacrosse. But overall we had more positives than we had negatives. So we have to keep working on the positives and tighten up the things we didn’t do as well as we should.”

Timothy Russo and Brian Bechtel were dominant on face-offs for Harwood, which fell behind 8-4 with 3:18 remaining.

“Timmy and Brian are both sophomores and they probably won’t 75 or 80% of those face-offs today, so that was huge,” O’Hara said.

O’Hara scored with 2:57 on the clock, making it 8-5, and then BBA was penalized less than a minute later. The Highlanders closed the gap to 8-6 with 56 seconds left to play, but the Bulldogs called a timeout with 11 seconds remaining and took care of business at the end.

“It’s a good barometer for our team to see how to win games when there’s runs and ebbs and flows,” coach Grabher said. “So I admire the guys for sticking with it and not letting that get out of hand. And the same goes for Harwood: They did the same thing. We’d get ahead, and they’d get back and not let us really bust it open. They’d claw back and kept it close, right up until the last minute after they scored another one. Basically they ran out of time, but it was a great lacrosse game.”

Burr & Burton (5-2) suffered an 8-7 loss two weeks ago against seven-time defending Division I champ CVU. The Bulldogs’ only other blemish was Monday’s 10-9 loss to South Burlington.

“(O’Hara) is obviously a talented player and his reputation precedes him,” coach Grabher said. “We don’t play Harwood normally, but I know two years ago they had a very good team. So we were looking for a challenging opponent, and we found it.”

Harwood (3-1) will travel to play D-II rival Spaulding at 7 p.m. Tuesday. The Highlanders will attempt to earn their fourth straight title berth next month.

“You’re not going to ever hold a good team to zero (goals),” Beilke said. “And goalies have to remember that this game was designed to have people score. Once our defense tightened up, some of our man-up plays worked really well. Our face-offs were better than anticipated and some of our individual play was really stellar.”

Ellie Moriarty (two assists) and Keely Levering-Fisher both recorded hat tricks. Huxley Sky finished with two goals and one assist. Deena Jacunski (one assist) and Belle Brown also scored for Rice and teammate Kat Hoff made eight saves in front of the cage.