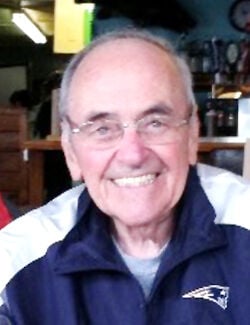 William Harold Atkinson BARRE — William Harold “Bill” Atkinson, 94, of Water Street, Meredith, New Hampshire, formerly of Barre, died Thursday, Jan. 7, 2021, at the Forestview Manor Care Facility in Meredith, after a brief illness. He was born June 29, 1926, in Lawrence, Massachusetts, son of Harold and Sarah (Ogden) Atkinson. Bill attended Lawrence High School (Massachusetts), then Searles High School, Methuen, Massachusetts, Class of 1944, where he was class president, played sports, set a basketball scoring record, and was later inducted into the Athletic Hall of Fame. Bill was a former resident of Fitchburg, Massachusetts; Suffield, Connecticut; Barre, Vermont; he resided in Meredith, New Hampshire, for the past 26 years. Bill was very active in the Episcopal Church since his youth. He attended Grace Church, Lawrence, Massachusetts, then Christ Church in Fitchburg, Massachusetts, where he served as lay youth director. He was ordained a perpetual deacon and served at Calvary Church, Suffield, Connecticut, and at Good Shepherd Church, Barre, Vermont. Upon ordination to full priesthood, “Father Bill” served as the rector of St. Martin’s Church in Fairlee, Vermont, for 17 years. Once retired, he remained active in the parish of Trinity Episcopal Church, Meredith, New Hampshire. He also served as both interim and supply clergy for many other parishes through the years, and as officiant for dozens of weddings, funerals, baptisms, all over New England and the eastern seaboard. Bill served in the U.S. Navy during WWII, as a Signalman 3rd Class on a merchant marine ship mostly in the Pacific Theater. After the Navy, he gave his G.I. Bill housing benefits to his parents so they could buy a home. Bill married Doris “Dot” Uttley in August 1945, and attended Springfield College, Class of 1950. As an educator at Suffield High School (Connecticut) for 17 years, “Mr. A” served in various roles: physical education teacher; coach of soccer, basketball and baseball; and athletic director. He had winning soccer seasons (several conference titles and finally, state champions in 1960). He was involved in creating and running the athletic North Central Connecticut Conference. He was inducted into the Athletic Hall of Fame in 2003. As an educator at Spaulding High School (Barre, Vermont) for 19 years, “Mr. A” was physical education teacher and varsity basketball coach for two years. He then became assistant principal until his retirement; many a Spaulding student will recall the arrangement of furniture in his office. As a coach, Bill was well-known for his vigorous sideline critique of the officials. From his recliner, he showed the same vocal enthusiasm toward players, officials and commentators in games on the TV. Bill was a loyal New England professional sports fan and an avid follower of the UConn women’s basketball program. For the last seven years, Bill waged a solemn and vigorous letter-writing campaign with professional sports teams and media networks to have all attendees at sports venues stand and sing our National Anthem together in traditional style. Bill was a contributor to the success of various summer camps in New England: founding participant for the Bement Camp in Charlton Depot, Massachusetts; director of Christ Church Camp in East Rindge, New Hampshire; program director for Camp Woodbrook basketball clinic in Center Ossipee, New Hampshire, and at Camp Robin Hood boys camp on Lake Ossipee, Freedom, New Hampshire; and then a founding pioneer and director for Camp Robin Hood Basketball Clinic. Bill was also the visionary for Camp Har-Cliff in Owls Head, Maine, owned and operated by the Atkinson family for eight years and now a summer retreat and a source of memories for four generations, where they “keep the journey going” and celebrate "new beginnings," as Bill would often entreat. Bill will be remembered as a man who loved and lived to serve people: a devoted father, grandfather and great-grandfather; passionate sports fan and coach; a patriot; an ecumenical and nurturing pastor; a competitor; an unfailing source of positive spirit and encouragement; and an advocate for forgiveness and second chances. His deep well of spiritual and personal generosity was always full for others to partake. Bill was always there with a card, letter or phone call in times of joy or times of need. His magic smile and welcoming demeanor were engaging and disarming. He loved any music for which he could pretend to be the orchestra conductor. Bill was predeceased by his wife of 60 years, Doris B. (Uttley) Atkinson; and a brother, Robert E. Atkinson of Lawrence, Massachusetts. He is survived by: two sons, Steven B. Atkinson and wife Paula (Atkins) of Royal Oak, Michigan, and Paul W. Atkinson and wife Linda (LaGue) of Conroe, Texas; five grandchildren, Daniel (wife Katie) and Craig Atkinson (partner Laura Hartrick) of Los Angeles, California, grandsons Matthew and Courtney Atkinson (partner Claire Bindler) of Plainfield, Illinois, granddaughter Kelly Atkinson of Oakland, California; two great-grandchildren, Calvin and Natalie Atkinson of Los Angeles, California; a brother, Kenneth A. Atkinson of Methuen, Massachusetts; sister-in-law Mrs. Wilfred (Terry) Uttley of North Andover, Massachusetts; brother-in-law Russell Lane of Sunderland, Massachusetts; also, several nieces and nephews in Massachusetts, New Jersey, Idaho and Alaska. There will be no calling hours or funeral. The family hopes to have a safe in-person “celebration of life” memorial service when the situation allows. Meanwhile, cards of condolence or memories can be sent to: The Atkinson Family, 40 Water St., Meredith, NH 03253. Please include an email address. In lieu of flowers, donations in Bill’s name can be made to the Veterans Honor Flight Network (https://www.honorflight.org/ways-to-donate.html); or to Trinity Episcopal Church in Meredith, New Hampshire (http://www.trinitymeredith.org/Trinity/) – be sure to specify “In Memory of William H. Atkinson of Meredith, New Hampshire.”

A true lose...he was an WONDERFUL man! So sorry to read of his passing. A rare man indeed😊