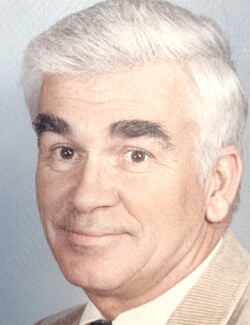 William G. Russell WATERBURY CENTER — William G. Russell of Waterbury Center/St. Cloud, Florida, 83, passed away unexpectedly at his home on Tuesday, Oct. 6, 2020. Born at his family home (The Rock Bridge Cabins) in Moretown, he was the son of the late John M. and Eunice (Lyman) Russell. On July 13, 1963, he married the former L. Chila Brown in Waterbury, Vermont. Bill was a 1955 graduate of Waterbury High School. He borrowed $100 from a local bank to attend Champlain College; it didn't work out for him, he only lasted one day. He served his country for four years as a member of the U.S. Air Force. He worked as a bookkeeper and later moved into heavy equipment sales for Reynolds and Son in Barre. He became involved in a variety of business interests: in 1971, he was the co-founder of the Palisades Corp. of Moretown; and gave birth to his passion in 1974 of the W G Russell Supply Corp., starting in Waterbury out of the local railway station, then moving to South Burlington, where he maintained a semi-retirement position as CEO until his death. While in Florida, he was a mentor in a land development corp. Bill was a member of the York Rite bodies, Winooski Lodge #49 F&AM of Waterbury, Mount Sinai Temple #3 of Montpelier and Elks Club #924 of Montpelier for over 44 years. He also was a lifetime member of the Wesley United Methodist Church of Waterbury. Bill is survived by his wife of 57 years, Chila Russell of Waterbury Center; one brother, John Russell of Finley Lake, New York; as well as nieces, nephews and extended family. Bill was predeceased by one sister, Blanche Shephard, in 2002; and one brother, Richard L. Russell, in 2015. Memorial services will be held in the Maple Street Cemetery in Waterbury Center, Vermont, on Saturday, Oct. 17, at 1 p.m. with burial to follow. Memorial gifts would be appreciated to the Wesley United Methodist Church, P.O. Box 742, Waterbury, VT 05676; or the Shriners Hospitals for Crippled Children, Springfield, MA, C/O of Mount Sinai Temple #3, P.O. Box 742, Montpelier, VT 05602. Assisting the family is the Perkins-Parker Funeral Home and Cremation Service in Waterbury. To send online condolences, please visit www.perkinsparker.com.

So sorry to learn of your loss. May your fond memories help to comfort you in this time of grief. May God bless you and yours. In sympathy, Stephen and Connie Weston