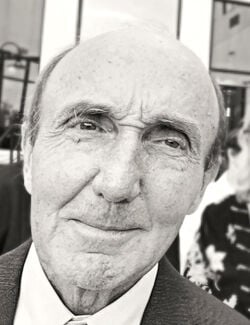 William F. Frantz Jr. BERLIN —William Frederick “Bill” Frantz Jr. passed unexpectedly from this life on April 10, 2021. The only son of Katherine (Pitzonka) and William Frantz Sr., Bill was born on Oct. 2, 1949, in Lancaster, Pennsylvania, and raised in Plymouth Meeting, a suburb of Philadelphia. Bill attended Episcopal Academy in Lower Merion Township, where his lifelong passion for running and being outdoors was first nurtured, and he had the honor of participating in the Penn Relays in recognition of his outstanding mile time. Bill attended Syracuse University, graduating in 1971. At Syracuse, his closest friends included Jon, Marc and Bill Silliman, Ed Shaw, and most importantly, David Lee of Burlington, Vermont. Through David, Bill developed a passion for alpine skiing, an interest in Vermont, and met his future wife, Diana, David’s younger sister. After graduating from Syracuse, Bill served in the National Guard, starting during the Vietnam conflict. Rising to the rank of Sergeant, he specialized in communications, and served most of his time with the Vermont Army National Guard 86th Infantry Brigade, based in Berlin. Bill and Diana were wed in September 1978, in a small ceremony in David and his wife Cheryl’s (Benfield) backyard in East Montpelier, Vermont. They first lived in Pennsylvania, where Bill worked for Harleysville Insurance as an auto claims adjuster and met lifelong friend, Roger Pandel. The young couple tired quickly of suburban life and decided to relocate to Vermont in 1980, ultimately settling in Randolph, along a quiet country road. Bill left his nascent insurance career, and took up work at EJP, an infrastructure supplies company, with an office in Berlin. Instead of having children of their own, they adopted a newborn from India, and became the proud parents of Rajan in 1986. Bill and Diana divorced amicably in 1991, with Bill relocating to Randolph Village, and then to Berlin in 1993. In 1998, Bill bought a modest home on Paul Avenue, which he lived in until his death. Bill and Diana reconciled their differences later in life, and ultimately lived together again as friends, until Diana’s untimely passing from cancer in 2008. Following Diana’s passing, Rajan’s relocation to Boston in 2015, and Bill’s retirement from EJP in 2016, Bill found himself with extra time on his hands. When he wasn’t caring for his widowed mother, who moved to Montpelier for the final years of her life, Bill spent time volunteering throughout his community – dedicating time to Meals on Wheels and the Kellogg Hubbard Library. He developed a companionship with Kathy Nickels of Montpelier, and the two of them spent considerable time sharing their mutual love of the outdoors and the many cultural institutions throughout central and northern Vermont. He found a late life passion for the Boston Red Sox, Boston Celtics and New England Patriots as a way to stay connected to his son. He followed all three teams closely on television, bringing them up as conversation pieces with Rajan on the phone – complaining about the bad times and celebrating the good ones (sometimes in the same breath). Bill carried on Diana’s passion for adopting retired Greyhound racers, most recently adopting a brindle “Jonas” in 2016, who was his other companion up until his death. He was well-known in the central Vermont community as an affable and extremely outgoing man, always appearing with a smile on his face and for want of a conversation, even if just to see how you were doing. Bill will forever hold a special place in the hearts and minds of his surviving family: son Rajan of Quincy, Massachusetts; cousins, Ruth Manning of Rochester, New York, Elizabeth Shaver of Trenton, New Jersey, and Dr. Thomas A. Collier III of Arizona; and of course, surviving dog, Jonas. Those wishing to express online condolences may do so at www.guareandsons.com. In lieu of flowers, please make contributions in Bill’s memory to Northern Greyhound Adoptions, 39 Rocky Ridge Road, Fairfax, VT 05454. Donations can also be made via http://www.northerngreyhoundadoptions.org/donations.php. Memorial services and a celebration of Bill’s life will be arranged through Guare and Sons Funeral Home, Montpelier, Vermont, and held at a future point in 2021 when COVID-19 protocols permit larger gatherings.

Bill was a kind, caring, and compassionate soul. Whenever I'd see him, his smile, greeting, and lightheartedness were filled with a sincerity that said, "I'm really glad to see you. How are you and what's going on in your life?" He'd much rather hear others' stories than tell his own: a rare and admirable quality. Diane and I miss him.

Bill and I were best friends Before the shutdown we would have lunch together once a week striving to reach all of the restaurants in central Vermont. We would have nice conversations about what was going on in our personal lives as well as globally.

Bill was also an enthusiastic bicyclist and would go out with a group of us form central Vermont as we bicycled long difficult trips and shorter ones.

He was always a very thoughtful and caring many and would sometimes call me up when we hadn't seen each other in while just to check in.

His passing brought tears to my eye on several occasions.