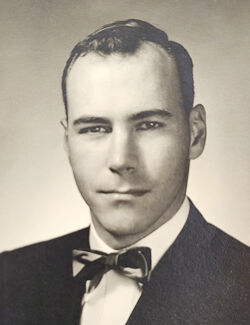 Warren A. Williams CRAFTSBURY — Warren A. Williams, 88, of Craftsbury, Vermont, died on Feb. 15, 2021. He was born on Dec. 20, 1932, in Brooklyn, New York, son of Warren J. and Elsie J. Williams. He graduated from Port Jefferson, New York, High School in 1950 and from Hofstra University, Hempstead, New York, in 1954 with a BBA. At the conclusion of his studies, he accepted an ROTC commission as 2nd Lieutenant in the Army Ordnance and served two years in Füssen, Germany, returning home as a 1st Lieutenant. Warren was employed by Spaulding High School, Barre, Vermont, in business and marketing education. He enrolled in Boston University, earned a master’s degree in School Administration and later completed the CAS degree in School Planning and Administration at the University of Vermont. He was promoted to area guidance coordinator, serving six area high schools, to complete 34 years as an educator. He was seasonally employed with the National Park Service as a park ranger at both Rocky Mountain National Park in Colorado and at Acadia NP, Bar Harbor, Maine, where he married Barbara Wellington in 1962. They were subsequently divorced. Warren enjoyed coaching Little League baseball and midget hockey. An Eagle Boy Scout himself, the first one from his Stony Brook, New York, troop, he was chairman of advancement in central Vermont. He served as deacon and senior deacon both in the Barre Congregational Church and the United Church of Craftsbury. Warren was also active in Masonry, having been raised in Mount Cube Lodge #10 in Orford, New Hampshire and later became a member of Meridian Sun Lodge #20 in Craftsbury, Vermont. He was elected worshipful master on three occasions, including Meridian Sun’s Bicentennial Master in 2000. He was affiliated with the chapter, council and commandry in Barre, as well as Scottish Rite Masonry in Burlington. He was a Shriner and a member of its Cycle Unit, participating in many area parades. He is survived by sons David Williams of Barre, Jeff Williams and his wife, Kristen, of Hillside, New Jersey, and Ian McMurray and his wife, Shannon Moulton, of Monkton, Vermont; and by his grandchildren, Grace and Ryan Williams and Mhairi Anne McMurray. He was recently predeceased by his wife of 41 years, Anne H. Wilson. At Warren’s request, there will be no calling hours. A private burial in the East Craftsbury Cemetery will be held at the convenience of the family. Should friends desire, contributions in his memory may be made to Meridian Sun Lodge #20, Craftsbury, Vermont, c/o Treasurer. Please visit awrfh.com to share your memories and condolences.