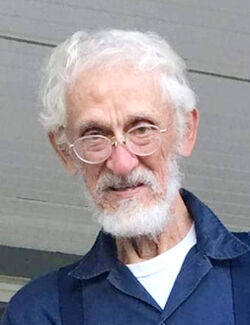 Thomas O. Eckart WORCESTER — Thomas Oliver Eckart, 83, of Worcester, Vermont, passed away peacefully at his home on Feb. 26, 2021, surrounded by his loving family. Tom was born in Collinsville, Illinois, to Oliver and Lena Belle (Whitten) Eckart on Oct. 2, 1937. He served in the United States Army from 1964 until February of 1966. He obtained his bachelor’s degree from Southern Illinois University where he majored in English with a minor in Forestry. He spent time out in California at a ranger station near Yosemite and taught in upstate New York at Lewis-Wadhams before finally settling in Vermont. Though most people know Tom as the quiet man (old curmudgeon) on the mountain, he was so much more than that. He traveled extensively throughout the world and the United States. He rode his motorcycle cross-country, worked on the docks in NYC, spent time opening some of the first Job Corps centers in the South and was a member of CORE (Congress of Racial Equity), just to name a few of his adventures. Tom spent the last 50 years of his life here in Worcester, on land he purchased with his brother. He was a carpenter by trade and used those skills to continually improve upon his property. Tom was known not only for his work ethic, but also for his integrity. He always had a smile and kind word. When he was not working, Tom could be found at Thunder Road in Barre, Vermont; he had a true love and passion for stock car racing and spent many Saturday nights driving the kids of Upper Minister Brook Road over to the races for the evening. As fall would approach, Tom could be found taking his dog, “Buddy,” for walks around the property, many times with his cat following along behind. He enjoyed puttering around on his tractor, working in his garden, and completing projects around the house. When it came time for resting though, Tom could be found sitting on the front porch or at his kitchen table talking with friends and family. Some of his most peaceful times were sitting on his bench, enjoying the sounds of the property and watching the birds as they nested, or the fish as they jumped in the pond. Tom took great pleasure in the simple things: everything from reading books and articles, to listening to his records or starting his morning with the Trading Post and Music to go to the Dump By. Tom was predeceased by his parents, Oliver and Lena Belle. He is survived by his daughter, Natasha (Chris) Eckart Baning; his grandchildren, Juliette and Christopher; and his son, Jesse Eckart. He is also survived by his siblings, Lyle (Al) Schultz, Jim Eckart, Mick (Fran) Eckart and Larry (Kathy) Eckart. There will be no formal services as this was Tom’s wish; but there will be a Celebration of Life held in September out at the farm. The family will provide additional information as the time comes closer. In lieu of flowers, donations can be made to the Humane Society, your public library or public television or radio station. Arrangements are being made through Guare & Sons Funeral Home. Online condolences may be left at www.guareandsons.com.