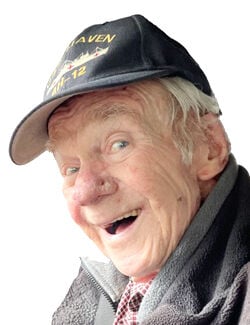 Stanley E. Flink BARRE — Stanley Flink, age 92, passed away peacefully on Tuesday, Nov. 9, 2021, at Woodridge Rehabilitation and Nursing where he had been a resident for the past four months. Born April 19, 1929, in South Portland, Maine, he was the son of Oscar and Doris (Dingley) Flink. He grew up in South Portland, Maine, and received his education in South Portland schools, graduating from South Portland High School. He graduated from Boston University in 1958 with a Bachelor of Music degree and received his Master of Arts degree from the University of Connecticut in 1970. He married Janet Gustafson in the Meeting House Hill Congregational Church, South Portland, Maine, on June 21, 1952. They resided in Roxbury, Massachusetts, South Portland, Maine, and Moretown, Vermont, before moving to Barre in 1958. They met in the Portland Junior Symphony where she played violin and he played trumpet. Stan served in the U.S. Navy as a Hospital Corpsman, 1st Class from February 1951 through February 1955 at several stations, including the Chelsea Massachusetts Naval Hospital, the U.S. Naval Hospital in Yokosuka, Japan, and the USS Haven on its world mercy cruise taking repatriated prisoners of war from Saigon, Indochina, to Oran, North Africa, and Marseilles, France, completing the world cruise in Long Beach, California. He taught instrumental music in South Portland, Maine, and in Vermont at Washington West District and Barre, retiring in 1987 as chair of the Fine Arts Department. He was a life member of the National Association for Music Education, served two terms on the Vermont Certification Review Board for the Education Department. He held numerous offices in Vermont Music Educators and Barre Education Association; was a charter member of the Vermont Philharmonic Orchestra; founded All-State Music Library; and served as chairman of the All-State Music Festival for a number of years. He conducted for the Washington County Orchestra, Barre City Band, and at various music festivals in Vermont. He also played bass violin in the orchestra pit for many plays in the area. He was a member of the Young at Heart Singers at the Barre Senior Center and a member of the choir at the First Congregational Church of Berlin. He was especially fond of spending summers at the family camp on Peacham Pond where he enjoyed fishing, monitoring loons and water quality, kayaking, occasional water fights with family, puttering on a wide range of camp construction projects and spending time with family and friends. He also had many hobbies, including restoring furniture, caning chairs, stenciling, cross stitching, stamp collecting, and was an avid reader. Stan is survived by his two daughters, Laura Gustafson, of Walpole, New Hampshire, and Gretchen Satink and her husband, Fred, of Berlin; his son, Richard Flink and his wife, Christine, of Chesapeake, Virginia; as well as many grandchildren and great-grandchildren. He was predeceased by his brother, Carl and his wife, Sylvia; his mother and father; a grandson, Steven Blair; and his wife of 62 years, Janet. A service of remembrance for family and friends will be conducted on Saturday, Nov. 20, 2021, at 11 a.m. at the First Congregational Church of Berlin, 1808 Scott Hill Road, Berlin, Vermont. For those who are unable to attend in person, a virtual option via Zoom can be obtained by emailing Richard Flink at rflink@cox.net. There will be no calling hours. In lieu of flowers, donations of remembrance may be made to Vermont Institute of Natural Science, VINS Nature Center, P.O. Box 1281, Quechee, VT 05059; or Vermont Philharmonic, P.O. Box 425, Montpelier, VT 05601. Arrangements are by Hooker Whitcomb Funeral Home, locally family owned and operated, 7 Academy St., Barre, Vermont. For a memorial guestbook, please visit www.hookerwhitcomb.com.

RIP, Mr. Flink. Now playing the clarinet part to Glory to Spaulding in my head.

Another great teacher and human being from Spaulding staff has left us. First Jack Delphia and now Stan - both will be missed. Heartfelt regrets to all.