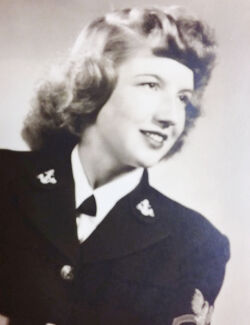 Ruth Morrison WEST TOPSHAM — Ruth Morrison, 96, of Vermont Route 25 passed away on Thursday, July 23, 2020, at her home. Born on March 4, 1924, in Worcester, she was the daughter of Ernest and Nettie (Wilson) Flanders. She and her brother, Dwain, grew up on Pike Hill in Corinth. Her Pike Hill “family” included many who were more like brothers and sisters than neighbors, and continued meeting for annual picnics through 2018. Ruth graduated from Thetford Academy in 1941, meeting her lifelong friend, Joyce Stickney, and was able to continue her friendship with best friend, Margy Linton, as a roommate. She graduated from Vermont College in 1943 where she studied to be a secretary. Ruth used her training immediately as secretary to the dean at Vermont College, then as a secretary to the chief chemist of Fiske Tire Plant in Chicopee, Massachusetts. She joined the WAVES (Navy), training in New York and Oklahoma and serving as a transportation specialist in Washington, DC, for the duration of the war plus six months. After the war, she was hired as a secretary at Bowen-Hunter in East Corinth. She married William “Bill” Morrison in 1947. He passed away in 1992. They raised their five children in the home they built in Waits River. These included her son, William “Bill” Morrison (deceased) and wife Lisa, as well as their children, Teri Simpson, Leslie Condon, Joe Condon, Mary Mitten and husband David, Beth Morrison, Ruth Sewell and husband Sam, and McKenzie Morrison, all of Colorado, as well as Lany Morrison of California; her daughters, Martha Wood and Margy Bruce of Brandon, Vermont; her son, Ralph “Ed” Morrison and fiancée Paula of Mount Olivet, Kentucky; and her daughter, Mary O’Meara and husband Dennis and grandson Trenton of East Orange, Vermont. She also enjoyed several step-grandchildren, 11 great-grandchildren and many great-great-grandchildren. Ruth was a mother, homemaker and craftsperson: she made wooden puzzles featuring towns, counties, states, territories, countries and continents, which she sold to teachers around the world. Later in retirement, she took up beading to create intricate jewelry for family and friends. Dedicated to her children, she served as 4-H leader for 15 years and was involved in Mother’s Club, PTA, swimming lessons and square dance lessons. Her love for the townspeople was shown by her service as town clerk of Topsham for 27 years; town treasurer for 27 years; school clerk for 25 years; school treasurer for 15 years; Topsham School Board for six years; Vermont State School Board for six years; writing a Topsham Town History and Genealogy; and mailing birthday and anniversary cards to over 250 families right up until the week before her death. A remembrance service will be scheduled for Ruth at a later date, due to the current COVID-19 situation. She loved flowers and if you are do inclined, pick a bouquet to enjoy in her memory. In lieu of flowers, memorial contributions may be made to the Tri-Village Fast Squad who served her recently and well, P.O. Box 58, West Topsham, VT 05086; or to the West Topsham Food Shelf, P.O. Box 64, West Topsham, VT 05086; will be greatly appreciated. The family wishes to thank the Veterans Affairs hospital in White River Junction for the amazing care provided by the infusion suite, as well as many other departments. Arrangements are by the Hooker Whitcomb Funeral Home, 7 Academy St., Barre. For a memorial guestbook, visit www.hookerwhitcomb.com.