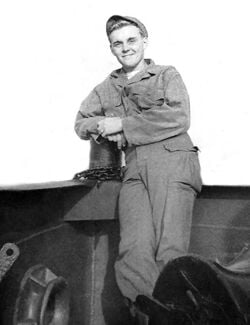 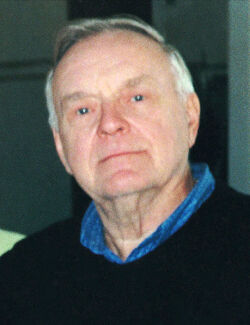 Ronald E.W. Crisman PEACHAM — Ronald Everett William Crisman, a resident of Peacham since 1964, died April 20, 2021, of heart failure at Northern Vermont Regional Hospital, at the age of 93. He was born in Chicago, Illinois, on Nov. 2, 1927, the son of Wilson and Anna (Johnson) Crisman of Oak Park, Illinois. Ron graduated from Lane Technical High School in Chicago and attended Illinois Institute of Technology before enlisting in the U.S. Army. He served in Japan from 1946 to 1947, where he was promoted to Sergeant and earned the occupation forces’ ‘Soldier of the Month’ award. Following his military service, Ron earned a degree in Electrical Engineering at Iowa Wesleyan University where he met and later married the love of his life, JoAnne Elizabeth Frick. “Ron and Jo” settled in New Lenox, Illinois, built their own house, and began a family in 1951. He held a variety of jobs as a young father, including insurance salesman for the agency founded by his father-in-law, Harvey Frick, and as a partner in a small chain of supermarkets. Ron and Jo fell in love with Vermont during a vacation in 1960 and moved to Peacham in 1964. Ron was hired by the State of Vermont in 1965, first as assistant director, and later as the commissioner, of the Department of Budget and Management; he held the latter position for many years under both Republican and Democratic governors. He was president of the National Association of State Budget Officers in 1973. Starting in 1977, Ron served a term as secretary of Vermont’s Agency of Transportation, supervising the completion of Interstate 91 and initiating a federally funded project to restore Vermont’s historic covered bridges. Following his retirement from state government in the mid-1980s, Ron was hired as a consultant by the U.S. government and was an advisor in Palestine, Afghanistan, Armenia, Albania, Macedonia and Morocco, on the best practices for legislative oversight of finances and infrastructure projects. Back home, he was a principal in the establishment of The Vermont National Guard Library & Museum in Colchester, the state’s first military museum. Ron was truly a jack of all trades. He enjoyed restoring his 1830s farmhouse in Peacham, wood and metal working, collecting books on military history, and world travel with JoAnne. He loved good food and was a regular at Sunny Gardens in Woodsville, New Hampshire, and The Creamery in Danville, Vermont. Ron was predeceased by JoAnne in 2019 and his brother, Wilson Crisman Jr., in 1983. He leaves his sons, Jeff of Joliet, Illinois, Kevin and daughter-in-law Ginny West of College Station, Texas; daughter, Candace Crisman of Cicero, Illinois; grandchildren, Claire Volain (and husband David Volain), Leah Crisman, Anna Crisman, Noe Gomez; and great-grandchildren, Ethan and Ella Volain. The family requests that any charitable contributions made in Ron’s name be directed to The Vermont National Guard Library & Museum, 789 Vermont National Guard Road, Colchester, VT 05446. A memorial event is planned for a later date. “Life should not be a journey to the grave with the intention of arriving pretty with a well-preserved body, but rather to skid in broadside in a cloud of smoke, thoroughly used up, totally worn out, and loudly proclaiming “Wow, what a ride!” (Hunter S. Thompson). For more information or to offer an online condolence, please visit www.rickerfh.com.

I remember many times when Ron and Joanne would have dinner with my parents. The 4 of them were very close. I remember well going to Peacham and their beautiful home. Condolences to the family.