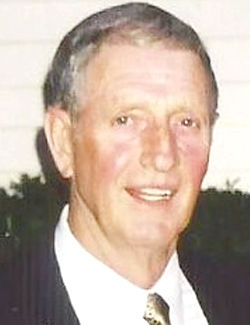 Romeo Paul Bilodeau BARRE CITY — Romeo Paul Bilodeau, 82, has joined his wife, Gloria, in the home of Our Lord on Jan. 25, 2020. He went peacefully with his loving family at his side after a long bout with brain cancer. Romeo was born in Barre, Vermont, on Aug. 8, 1937. He was the son of the late Leo J. Bilodeau and Antoinette (Constant) Bilodeau Dufresne and stepfather, Conrad Dufresne. Romeo grew up in Barre with his brothers, Maurice, Henry, Leopold and Bernard, and his sister, Jeannine. With the strictest mother and father, they were all always up at the crack of dawn each day, no matter what, doing their farm chores, attending school and going to church every Sunday. In their spare time, which was hard to come by, the brothers managed to fit in fighting with each other, dances at school, fighting over girls, swearing, competing with each other on who was the strongest, who’s the most handsome and learning how to sing and yodel. Romeo graduated from St. Monica’s graded school and went on to graduate from Spaulding High School in 1955. After graduation, he joined the Air Force and took basic training at Sampson Air Force Base in Geneva, New York. His first duty station was Magill Air Force Base in Pensacola, Florida, as a Military Police. He was then transferred to England at the Royal Air Force Station, West Draton, for three years 1956–1959 as a Military Police. He was honorably discharged in 1959. After returning home, he joined his family working at his stepfather's business, Conrad H. Dufresne & Sons Farm Machinery, as an accountant and parts man. Romeo then found his girl, Gloria, and they fell madly in love. They were married on Oct. 1, 1960, and had three beautiful children. During this time, he left the family business and went to work as an insurance agent at Prudential Insurance until his retirement in 1999. He also joined the Navy Reserves as a Sea Bee and spent many drill weekends and Act Dutra trips with his oldest son, Jonathan, before retirement after 26 years. Romeo took great pride and joy in everything he did. Romeo was a devoted and loving husband, father, brother and best friend. He loved and was very proud of his grandchildren. Romeo enjoyed gardening with his wife and children, singing in the church choir, canning, cooking, bartending, attending Prudential conferences, family vacations to Cape Cod and Maine. Romeo enjoyed golfing, horseshoes, fishing, hunting, hunting camp, playing pitch, farming with his oldest son, Jonathan, raising chickens, pigs, turkeys, black Angus cattle and spending many nights sugaring with the boys at the 3 B’s Sugarhouse. Romeo and Gloria vacationed in Cape May, enjoying all it had to offer and loved playing the slot machines in Atlantic City, Mohegan Sun, Foxwoods, Montreal Casino and the Akwesasne Mohawk Casino Resort. Romeo loved to visit his grandson Josh’s horse, also named Romeo, and he would bring him treats and watch him in the pasture. Romeo was not one to sit still, even in retirement. Romeo went to the gym every day, oftentimes bringing one of his grandchildren. He worked at Sprague Farm milking cows. He became a Cabot ambassador promoting Cabot cheese traveling all over the United States which was in his words, “The Cat’s Meow!” Most recently, he worked at Aubuchon Hardware where he continued his friendships with the many people whom he came to know through his many years as an insurance agent and a member of the community. Romeo’s Catholic faith was very important to him and he went to church every day. He sang at church every Sunday and also for many weddings and funerals. Romeo loved to laugh, sing, yodel with his wife and anyone who wanted to join him. Romeo was a member of St. Monica’s Parish, Canadian Club and the Mutuo Inc. Survivors include his son, Jonathan and wife Reneè and their children, Tyler, Evan and wife Abbey and Joshua; his daughter, Marie and husband Brice Mugford and their children, Matthew, Gwendolyn and Gavin; his son, Dominic and son Justin and fiancée Minta Pudvah; siblings, Henry and wife Sally Bilodeau, Father Leopold Bilodeau; and in-laws, Lucille Dufresne, Lee and Dick Hubbard, Beverly and Charlie Thygesen, Joyce and Dick Polonski, Doris Town, Gary and Muriel Pletzer, Donna Pletzer, Helen Pletzer; and many beautiful nieces and nephews. He was predeceased by his wife, Gloria; his parents; brothers, Maurice Bilodeau, Bernard Dufresne; sister, Mary Concepta Bilodeau; in-laws, Edgar and Mary Pletzer, Edgar "Peanut" Jr., Leonard and Richard Pletzer, Salvatore Carrubba, Bruce Town, Richard Hubbard, Marilyn Pletzer Alpers, Merry Bilodeau and Jeannine Bilodeau; nieces, Sherry Bilodeau, Anna Pletzer; and nephews, Gregg Thygesen, Scott Bilodeau and Ricky Pletzer. A Catholic memorial Mass at 11 a.m. and Celebration of his Life immediately following, will be held on Feb. 7, in St. Monica Catholic Church in Barre. Extra parking is available at St. Monica parking lot. There are no calling hours; burial with his wife, Gloria, will be at a later date in the Vermont Veterans Memorial Cemetery in Randolph Center. The family would like memorial contributions in his memory made to Gregg Thygesen Memorial Scholarship Fund, c/o Thygesen Sports, 51 Smith St., Barre, VT 05641; Central Vermont Home Health & Hospice, 600 Granger Road, Barre, VT 05641; National Life Cancer Treatment Center (NLCTC), P.O. Box 547, Barre, VT 05641; or to St. Monica’s Catholic Church, 79 Summer St., Barre, VT 05641. Arrangements are in the care of the Pruneau-Polli Funeral Home, 58 Summer St., Barre, Vermont. Those wishing to express online condolences may do so at: www.pruneaupollifuneralhome.com.

Father Leo, and the Bilodeau. Our heartfelt condolences for your loss. May he rest in eternal peace. Lynn Provasi and Sandy MacAulay

My sincere heartfelt condolences to the entire Bilodeau family on their loss of Romeo. I was so blessed to have known this incredible man, full of kindness, humor, integrity, humility & love. I will remember him with great affection, and take comfort that he suffers no longer and has been reunited with Gloria, the love of his life. Rest in everlasting peace, my dear friend. You will be dearly missed.