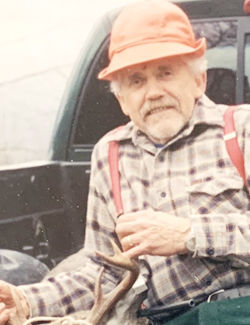 Roger Tibbetts CABOT — Roger Tibbetts of Cabot passed away on June 6, 2020, at the Granville Center Nursing Home in Granville, New York. Roger, born in Barre, was the son of Frank and Mildred (Emery) Tibbetts. He grew up in Marshfield and graduated from high school there. He was a marksman in the Army and he went on to get his associate degree in from the Community College of Vermont. He worked for decades for the State of Vermont. Roger was an avid outdoorsman who loved fishing and hunting, but also watching the wildlife around his home. He also enjoyed collecting antique fishing tackle. He loved to play horseshoes and won several championships. His pride and joy were his pets, especially his Golden Retrievers which he had several of over the years. Roger was predeceased by his parents and his brother, Frankie. He leaves behind his beloved wife, Dorothy; and his dear cousins, Patrick Tibbetts of Plainfield, Pattie Dupuis of Barre and Paula Bettis of Lebanon, New Hampshire. A graveside memorial service will be held on Monday, June 22, at 1 p.m. in the Durant Cemetery in Cabot, Vermont. Contributions may be made to the Central Vermont Humane Society in his memory.