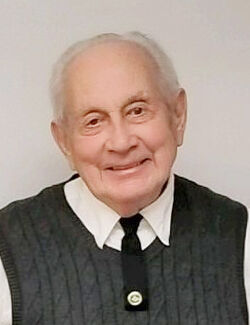 Robert H. Morse MONTPELIER — Robert H. “Bob” Morse, 93, passed away peacefully on Monday, Feb. 15, 2021, with his son at his side. He was born in Waterbury in 1927, the oldest of five children born to Harvey and Grace (Batchelder) Morse. Bob graduated from Waterbury High School on June 13, 1944, and was the last surviving member of that class. He enlisted in the U.S. Navy a week after graduation and served in WWII on the USS Speed. Before joining the Navy, he met Gloria Gray. They married in 1948 and had six children. They later divorced. Bob worked at a sawmill, a furniture factory and as a game warden, where he loved finding remote beaver dams, then trying to re-find them with his brother or friends. He graduated from the Vermont School of Agriculture (now Vermont Technical College), worked as a herdsman at the Vermont State Hospital Farm, as a Department of Agriculture Creamery Inspector, then became head of Vermont’s Dairy Lab. He had a second career of several decades as a rural letter carrier. In his spare time, Bob was an avid and skilled genealogist, serving as Vermont’s Morse Family representative to national efforts, often mentoring other genealogists. For at least 50 years, he explored and documented central Vermont cemeteries, authoring several books on them. In 1982, Bob married Nancy Lilley of Waterbury - for 40 years, he was blessed to add her family to his. They lived his love of outdoors and nature through fishing, hunting and various types of gardening. For more than 50 years, he grew balsam trees for Christmas trees and wreaths. He learned the science and art of maple sugaring, making it a cherished tradition he taught to his descendants. In his 80s, he began painting on sap buckets, with substantial skill and satisfaction. Bob was a man of great faith; he joined the Congregational Church at the age of 12. The church’s 1939 membership guide describes who he became: “He shows his loyalty to his Christ and to his Church vows, by cultivating a spirit of helpfulness and good will wherever he goes.” His memberships included the East Montpelier Old Brick Church for approximately 60 years and the Wyoming Lodge #80 F&AM in Plainfield for 64 years, including being past master of the lodge. From his youth until his 90s, he volunteered, he raised his children to help at church, fraternal and community activities. In his 90s, he was still often the first to arrive at the Twin Valley Senior Center and the Old Brick Church in East Montpelier to set up, and the last to leave after clean-up was done. Survivors include his son, Bruce Morse and his wife, Shirley, of Berlin, Vermont; his daughter, Diane Konrady and her husband, Michael, of Morrison, Tennessee; his grandchildren, Amy Carver and her husband, Ryan, and Karl Martin, all of Tennessee, Elaine Toohey of Montpelier, Vermont, Nathan Bartlett and his wife, Betsy, and Brent Bartlett, all of Lyndonville, Vermont, Tom Bartlett and his wife, Audrey, of Iowa, Mari Huff and her husband, Ryan, of Florida; and by Nancy’s children, Barbara Fielder and her husband, Carl, Randy Lilley, Mark Lilley, Cathie Meyer and her husband, Brad, and Christi Hope; his combined families include 16 grandchildren, 35 great-grandchildren and four great-great-grandchildren; and his brother, Alan Morse of Florida; as well as his dear friend, Joan Fadden. In addition to his parents, he was predeceased by his daughter, Sally Wagner; and three children who passed in infancy, James, Elizabeth and Cynthia Morse; his second wife, Nancy; and by his siblings, Clyde H. Morse, Alice Devine and Harvey Morse. No services are planned at this time. At a later date, he will be interred in the Duxbury Cemetery near his infant children. In lieu of flowers, memorial contributions may be made to the Old Brick Church, P.O. Box 152, East Montpelier, VT 05651; Twin Valley Senior Center, P.O. Box 38, East Montpelier, VT 05651; Heaton Woods Residence, 10 Heaton St., Montpelier, VT 05602; Wyoming Lodge #80, 32 Hollister Hill Road, Plainfield, VT 05667; or to the charity of your choice. Arrangements are by Hooker Whitcomb Funeral Home, 7 Academy St., Barre. For a memorial guest book, please visit www.hookerwhitcomb.com.

I remember Bob as being our mail carrier as i was growing up. One day as i was horseback riding with a family dog tagging along, Bob accidentally hit and killed the dog with his vehicle. He stood there on the side of the road with me, both of us with tears streaming down our faces. As a young adult, my Dad (Romaine Andress) and i would go buy our Christmas trees from Bob. What a great man he was. It was a privilege to have known him. My prayers to his family.

Bruce and families, Our thoughts and prayers are with you, your Dad was a Great Man, loved by all.

Lisa, remembers your Dad, the day he dropped off our mail, she had a severe nosebleed, your Dad, even though he was delivering the mail, stopped, took Lisa and I to CVMC, where we met Darrell. How Special he will always be, Love you all, Judie Farnham and Family

Please accept my deepest condolences for the death of your father. I will always remember his wide smile and jovial laugh. He also had something positive to say when I ran in to him at Uncle Clyde’s house and for many years after that. May your fond memories bring you much warmth in the days ahead.