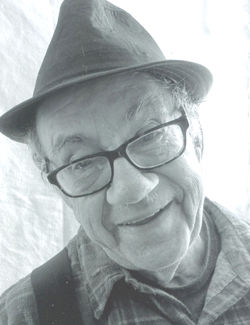 Robert E. Smith EAST MONTPELIER — Robert E. Smith, 87, passed away peacefully on Wednesday, Feb. 12, 2020, at the Woodridge Nursing Home in Berlin with his family at his side. Born on Dec. 17, 1932, on their hilltop farm in Washington, he was the son of Nelson and Sarah “Sadie” (Wood) Smith. Bob was valedictorian of his eighth grade class at Washington Village School, where he gave a speech (in 1947) about “The Importance of Being Weird.” His family moved to East Barre and he graduated from Spaulding High School in 1951. He demonstrated artistic talent and was selected to attend the Barre School of Memorial Art, where he earned a two-year certificate in Commemorative Memorial Design and Delineation in 1952. With this training, he started out as a draftsman at Modern Granite Co. and later at Peerless Granite. He served in the U.S. Army from 1953-1955 as a medic assigned to the 329 Hospital Train in Germany. On the last day of his life, the Vermont Office of Veterans’ Affairs presented him with two medals honoring his service. Bob was married for more than 61 years to Alice (Goulet) Smith, daughter of Eustache and Anna (Giguere) Goulet of Washington. The couple lived in Washington until 1967 before moving to the current family home in East Montpelier. Bob, who lived at Woodridge from September 2018, was known as a jokester. He loved making art, listening to music and dancing. For 33 years, he worked for the Vermont State Highway Department and helped build Interstates 89 and 91. Bob loved traveling around the state and introducing his family to state parks and lakes on weekends. He retired in 1989. While working for the state, Bob had several side gigs. He ran a small business as an Industrial Print Service, making blueprints for the monument industry, and he did freelance drafting for a private engineering firm. In addition to taking correspondence courses in engineering, he also took night and weekend classes to earn an associate degree from Community College of Vermont. He went on to graduate with a Bachelor’s degree in Human Services through the Johnson State College External Degree Program in 1981 at the age of 48. Bob also loved attending auctions and yard sales, buying furniture that he would fix up and sell. He built over 1,400 bookcases and custom furniture pieces that he sold through his retirement business, Tinker ‘n Trade. He hated to see anything go to waste and in 2001, was awarded a grant from the Central Vermont Solid Waste District for his efforts to keep usable materials out of the landfill. He was curious about the world and loved talking with people. As a young man, Bob volunteered as a firefighter in Washington and assisted with the Boy Scouts in East Montpelier. In later years, he volunteered at the Central Vermont Hospital, in the kitchen during Knights of Columbus bingo nights, and gave rides through the Onion River Exchange network. Between 2002 and 2008, he and Alice traveled to all of Vermont’s 251 towns as part of the Vermont 251 Club. During this time, he took painting lessons and became an avid painter. He continued to draw right up to the final week of his life. Survivors include his wife, Alice Smith of East Montpelier; his daughter, Jackie Smith-Nielsen (husband Erik Nielsen) of Brookfield; his son, Michael Smith of Barre; his sister, Barbara Fantoni of East Barre and her sons, Kim (partner Pam Titus) and Aldo (wife Jodie), and their children, Aleta, Daniel, Maria and Gina. A Mass of Christian Burial to honor and celebrate his life will be held on Monday, March 2, 2020, at 11 a.m. in the St. Augustine Catholic Church, 16 Barre St., Montpelier. There are no calling hours. Entombment will be made in the Hooker and Whitcomb Vault pending later interment in the Maple Hill Cemetery in Washington. In lieu of flowers, the family recommends memorial contributions to organizations that have made a difference in Bob’s life: St. Augustine’s Catholic Church, 16 Barre St., Montpelier, VT 05602; Woodridge Nursing Home Activities Fund, 142 Woodridge Drive, Montpelier, VT 05602; National Alliance on Mental Illness (NAMI Vermont), 600 Blair Park Road, Suite 301, Williston, VT 05495; Project Independence, 81 North Main St., Suite 1, Barre, VT 05641; or Hope Lodge-American Cancer Society, 237 East Ave., Burlington, VT 05401. The family wishes to express its deep gratitude to the staff of Woodridge Nursing Home and BAYADA Hospice Services for their excellent and compassionate care. The Hooker and Whitcomb Funeral Home, 7 Academy St., Barre, is in charge of the arrangements. For a memorial guestbook, visit www.hookerwhitcomb.com.