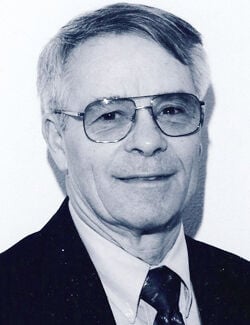 Robert C. Brault BARRE TOWN — Robert C. Brault, 86, of Beckley Hill Road, passed away into eternity on Friday, Oct. 9, 2020, at his home. Born April 5, 1934, in Barre, he was the son of the late Edward and Isabelle (Pillette) Brault. On Dec. 29, 1956, Robert married "the love of his life,” Angela Caslani, at St. Monica’s Church in Barre. They enjoyed 63 years of marriage together. Robert graduated from Spaulding High School, class of 1953. He attended Saint Michael’s College and then to Bentley College of Accounting & Finance and graduated in 1956. In September of 1956, Robert served in the Army in the 3rd Armored Division at Fort Hood, Texas, and Germany. He was honorably discharged in September 1958. Robert was employed by Albert E. Slayton, Public Accountant, in Montpelier and then at Paige & Campbell in Barre. In September 1969, Robert and Mario Lorenzini purchased and operated the Country House Restaurant in Barre which he operated until 1987. Robert was very active in his community and served in several organizations such as: The Barre Area Development, Central Vermont Chamber of Commerce, Vermont Lodging and Restaurant Association, The Barre Lions Club, St. Monica Church, Vermont Basketball Officials Association, and over 50 years at the Vermont Football Officials Association, Barre Youth Sports, Mutuo Soccorso Society, the Knights of Columbus and the American Legion. He enjoyed all sports and enjoyed playing tennis for many years. He was honored with the Barre Joint Service Club Award in 1997. Robert is survived by his loving wife, Angela Brault; his brothers, Leonard and Janice Brault of Westernville, New York, Norman and Colleen Brault of Royal Oak, Michigan, Rev. Bernard Brault of Bay Shore, New York, and Roger and Patricia Brault of Barre, Vermont. He also leaves behind sisters-in-law, Rita V. Caslani of Barre, Vermont, and Bianca C. Duff of Las Vegas, Nevada. He leaves behind many cherished nieces and nephews. Contributions in Robert’s memory can be made to St. Monica Church, 79 Summer St., Barre, VT 05641. Due to COVID-19 restrictions, a Mass of Christian Burial will be celebrated by private invitation, at St. Monica Catholic Church in Barre. Burial will follow in Hope Cemetery. Arrangements are in the care of the Pruneau-Polli Funeral Home, 58 Summer St. in Barre. Those wishing to send online condolences may do so at: www.pruneaupollifuneralhome.com.

Angie, to you and your family I send my deepest sympathy for the loss of Bob. He was a very nice man and certainly did his part being involved in so many organizations in Barre. For that, Barre is a better community. May he Rest In Peace

Bob got me into officiating football about 20 years ago. I always appreciated Bob's direct manner and his guidance. His dedication to the game, as well as the children and young adults that played the should not go unnoticed. Rest in Peace Bob

I was one of Bobby’s tennis buddies over the last few years. Loved playing with him. Always spirited, competitive and smiling. Bob was a true gentleman with a great sense of humor. He brightened our days. He will be very much missed. Lowell VanDerlip

Angie, I am so sorry to hear of Bob's passing. My condolences and prayers to you.🌹

Angie, So very saddened to read of Bob’s passing. I will miss his smiling face. My condolences to you and your family.

Angela, we are so sorry to hear about Bob. Please accept our sincere condolences and our thoughts and prayers are with you and your family. Alan and Sherry Sancibrian

Angela, our sincere sympathies on Bob's passing. He was a wonderful man who was always had a smile and a hello for everyone. Whenever we were at my folks house on Beckley ST (Across from the Mutuo) he would always wave if we were outside. You are in our thoughts and prayers. Joe and MaryAnne (Henry) Cerasoli

Dear Angie Your family is in our thoughts and prayers. Elliott and Florence Morse