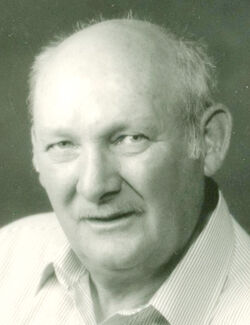 Richard N. Jensen BARRE TOWN — Richard N. “Dick” Jensen, 91, a former longtime resident, passed away on Friday, Nov. 6, 2020, at the Central Vermont Medical Center in Berlin. Born Aug. 6, 1929, in Montpelier, he was the son of Hans C. and Lillian (Beck) Jensen. Dick attended Montpelier elementary schools and graduated from Montpelier High School. After graduation, he worked for his uncle, Carl Jensen, and Vermont Railroad. In 1950, he was drafted into the U.S. Army and served during the Korean conflict. In October of 1955, he married Patricia Batchelder in Plainfield. They made their home in Montpelier for 10 years before moving to Barre Town in 1965. Patricia passed away in 2013. Shortly after that, Dick moved to Heaton Woods in Montpelier. Dick was employed by the Vermont Department of Agriculture as an inspector in the Enforcement Division for 50 years. He served on the Barre Town Board of Selectmen, the Board of Directors of the Vermont State Employees Credit Union (VSECU), and the Board of Directors of the Washington County Community Council. In his spare time, he enjoyed snowmobiling and was a past member of the Barre Sno Bees, attending races at Thunder Road, gardening, antiquing and going to auctions. Survivors include his son, Charles Jensen and his wife, Christine, of Barre Town; his grandson, Samuel “Sam” Jensen and his wife, Melissa, also of Barre Town; his granddaughter, Rebekah “Bekah” Town and her husband, Justin, of Washington; his brothers, David Jensen of Orange Beach, Alabama, and Robert Jensen of Morgan, Vermont; and his sister, Joyce Bourgeois of Prescott, Arizona; as well as several nieces, nephews and cousins. In addition to his parents, he was predeceased by his wife, Patricia (Batchelder) Jensen; his sisters, Patricia Pembroke and Betty Jensen; and his brother, John Jensen. The graveside service to honor and celebrate his life will be held at the convenience of his family in the Spring of 2021. Memorial contributions may be made to the Patient Activity Fund at Heaton Woods, 10 Heaton St., Montpelier, VT 05602. Arrangements are by Hooker Whitcomb Funeral Home, 7 Academy St., Barre. For a memorial guestbook, visit www.hookerwhitcomb.com.