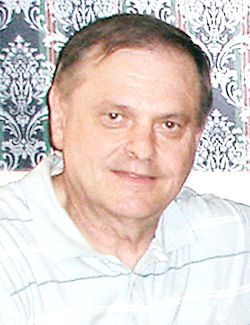 Richard D. LeCours HARDWICK — Richard D. LeCours, attorney, beloved brother, favorite uncle, and loyal friend passed away on June 23, 2020, after a brave battle with cancer. A lifelong resident of Hardwick, Richard entered the world on Nov. 22, 1950. He was the 11th of 13 children born to Anselme and Violette (Dion) LeCours. Within the circle of his large family, Richard’s love of music blossomed. Many good times were spent harmonizing with his siblings in the family kitchen on West Church Street. His beautiful singing voice and folk guitar graced many weddings and church services, as well as family hootenannies and gatherings with friends. Rick’s intellect and humor made him a popular figure at Hardwick Academy. He graduated in 1968 and began his studies at the University of Vermont the following autumn. Three years later, his two younger brothers, the twins, joined him on campus. Close in age and spirit, they became a dynamic trio known for their musical talent and friendly exuberance. He graduated from UVM in 1972 and enlisted in the U.S. Army, serving honorably in Germany. A deep thinker and philosopher, Richard’s time overseas deepened his desire to be of service to others. Upon returning to the States, Richard channeled that ambition into a career in law. He attended Western New England School of Law and passed the bar in 1978, an accomplishment that made his parents very proud. He started his career as a public defender. He practiced general law and served the Hardwick area for over thirty years. A true gentleman, Richard’s sincerity and generosity were gifts that he shared both professionally and personally. He had a truly magnetic personality. His clever wit and extraordinary storytelling skills will be greatly missed. Uncle Rick’s patience and support emboldened his nieces and nephews to express themselves artistically. Even in his final weeks, Rick remained the brightest light in the room. His memory will be forever cherished by his siblings and their spouses, his nieces and nephews, and his devoted friends. Richard was predeceased by his parents; his brothers, Denis and Roger; his brother-in-law, Vincent LeBlanc; his sister-in-law, Madeleine LeCours; and his nephew, Patrick LeCours. He is survived by his siblings and their spouses: Mignonne LeBlanc, Robert, Lawrence (Anita), Leo (Bonnie), Annette Miller (Donald), Jacqueline Borges (Robert), Diane Fournier (Emile), Paulette Bessette (Richard), Dan (Gail), Michael (Leslie O’Neil); sisters-in law, Denise Hark and Patricia LeCours; and many nieces and nephews. The Northern Vermont Funeral Service of Hardwick is in charge of arrangements. Due to current restrictions, a memorial service will be held at a later date. Those who wish may make a donation to the Hardwick Rescue Squad, P.O. Box 837, Hardwick, VT 05843; or to Mary Queen of All Saints Parish, P.O. Box 496, Hardwick, VT 05843. In the meantime, in honor of Rick, we ask that you raise a glass, sing a song, and spread general kindness. Vive la famille!