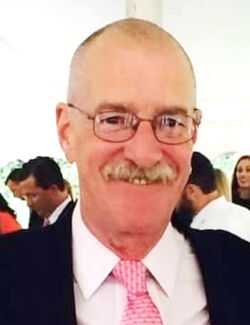 Richard A. Carpenter BARRE — Richard A. Carpenter, 73, formerly of Barre, passed away on Oct. 23, 2021, surrounded by his partner, children and niece. Rick was born on Sept. 5, 1948, in Fort Wayne, Indiana, and grew up in Websterville, Vermont. He graduated from Spaulding High School in Barre, Vermont, in 1966. He then served in the United States Air Force specializing in intelligence and served his country in Taiwan, Korea and Alaska. After his service, Rick returned to Vermont and married Kathryn (King) Matthews in 1974 and they had three sons. In 1983, he married Karen Roy and they had two daughters. Rick loved all five of his children very much. He enjoyed attending their sporting events and was known to travel to upstate New York and Maine to attend away games. As his children grew, he enjoyed having them over for dinner and would not let them leave without a week’s worth of leftovers, various condiments, spices and even cooking utensils. In his later years, he found a life partner in Carol Townsend Penman, of Taylor, Michigan. Rick moved to Michigan with Carol and gained a four-legged best friend, Roxy, along with an extended family in her children and grandchildren. Rick will be remembered by all those who knew him for his love of good food, a good fire, good whiskey, long debates and Tom Petty. He enjoyed spending time watching the Red Sox win and was a diehard Patriots fan. Rick was predeceased by his father (Richard T. Carpenter), mother (Muriel Goyette), and stepfather (Dr. Roderick Goyette). He leaves behind his partner, Carol Townsend Penman; his five children, Jon Carpenter (wife Molly), Nate Carpenter (wife Natasha), James Carpenter (wife Jesse), Leslie Burke (husband Corey) and Chelsea Lever (husband Tyler). Rick was also blessed to have nine grandchildren, Keating, Quin, Sloane, Lydia, Eowyn, Jack, Anthea, Hannah and Ellie. Rick also leaves behind two beloved sisters, Jane Cavazza (husband David), of Rhode Island, and Kathy Carpenter, of New York; along with two loved nieces, Cara and Stacey; and a loved nephew, Timmy. Rick also leaves behind a stepsister, Joni Calcagni (husband Joe) and their children, Joey Calcagni and Vinny Calcagni. Rick also left behind many friends whom he considered family. Per Rick’s wishes, there will not be a viewing or service. A barbecue will be planned with loved ones when warmer weather returns. In lieu of flowers, please make a donation to the local food bank which is a cause that Rick often donated to.