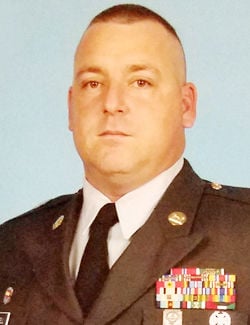 Patrick Benjamin "Mitch" Mitchell July 20, 1972 - March 7, 20202 KNOXVILLE, Tenn. — Patrick Benjamin “Mitch” Mitchell, 47, passed away suddenly at home on March 7, 2020. Pat was born July 20, 1972, in Rutland, Vermont, the son of Martin Donald and Beverly Bagby Mitchell, of Cabot. He graduated from Cabot High School in 1990. Pat married the Love of his Life, Sherri LaVancha, in August 1994. SFC Mitchell retired from the U.S. Army after 27 years, serving during wartime with several tours in the Persian Gulf, Afghanistan and Iraq. Although injured, Pat survived when his truck hit an IED in 2011. He earned 21 medals and many commendations for his military service. Pat was remembered as a down-to-earth NCO who supported the men he supervised. Pat volunteered in his children’s sporting activities and in his sons’ Boy Scout troops. He enjoyed motorcycling, fishing, listening to music, telling captivating stories but most of all, spending time with his family. Pat’s father, Don, cherishes the summer he spent working with him at home in Cabot after retirement from the Army. Pat was a force of nature with a giant personality, and left a lasting impression on all who met him. Survivors include his wife, Sherri; three children, Patrick (fiancée Jackie), Jacob, Mariah, along with two grandchildren, all of Knoxville; three sisters, Sheri Graber (Richard) of Jacksonville, Florida, Kristie Jordan of Dimondale, Michigan, Cathie Martino (Scott) of Lilburn, Georgia; and brother Michael Vandenburg of Cabot, Vermont. Pat was predeceased by his sister, Mischelle Vandenburg, in 2017. Military graveside services were held in the East Tennessee State Veterans Cemetery on March 16, 2020. A flag presentation was made to Pat’s widow, Sherri Mitchell. Since this was at the beginning of pandemic border closures, SFC Mitchell’s battle buddies overcame great obstacles to come from as far away as Germany to pay their last respects to him and his family. A celebration of Pat’s life is planned at Maplecrest Farm (2325 Route 215 South, Cabot, Vermont) for friends to drop by on Saturday or Sunday, July 18-19, from 3 p.m. to 6 p.m. RSVP P.O. Box 23, Cabot VT 05647. We will gather around Pat’s Pond and remember the humor, joy and love this great man brought into our lives. Memorial contributions may be made to a scholarship fund for Pat’s children.

So very sorry for your loss. Thank you and your family for sharing him to serve our country. God Bless.