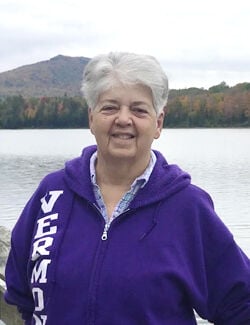 Pamela J. LaVanway MONTPELIER — Pamela J. LaVanway passed from this life to be with her Lord and Savior on March 10, 2021. Pam was born to John and Anita (Lumbra) LaVanway on April 12, 1943. Pam served in the U.S. military until her honorable discharge and served in the Franciscan Order. She would later become a journeyman draftsman for designing monuments throughout the state of Vermont. Pam’s passion was serving God and doing all that she could to bring others to know the love of Jesus Christ. She served as a missionary in Cyprus, Mongolia, and was also an ordained missionary for missionary service. She had been an active member of the Lighthouse Christian Church for many years, with oversight of evangelism. Pam was an exceedingly generous, loving, compassionate and caring woman of God. Her love for her community and nations around the world were seen and felt by all who had the privilege of knowing her. Pam was predeceased by her parents, John and Anita LaVanway. She is survived by her sister, Brenda LaVanway of Morrisville, Vermont; as well as her half-brother, John LaVanway of Florida. There will be no calling hours. A memorial service will be held at “The Lighthouse Christian Church” on 3 St. Paul St., Montpelier, VT 05602, on March 18, 2021, at 10 a.m. Arrangements are being held through Guare & Sons Funeral Home. Online condolences may be left at www.guareandsons.com.

Brenda, I am so sorry to see that Pam passed away. I worked with her at Cetrangolo’s in Northfield for a few years. Wonderful lady. I send my deepest sympathy to you and the family. Rita Bassett🙏