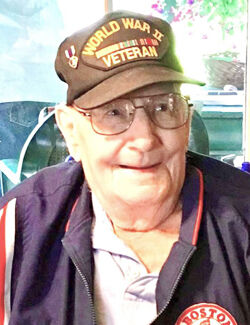 Otis D. Corrow HARDWICK — Otis Dean Corrow, 96, of Piermont, New Hampshire, formerly of Hardwick, died Sunday, Oct. 31, 2021, at Veterans Affairs Medical Center in White River Junction. He was born March 23, 1925, in Hardwick, the son of Clayton D. Sr. and Nina Marshall Corrow. He attended Hardwick Academy and at age 87, graduated from Hazen Union School in Hardwick through a State of Vermont school program.. Mr. Corrow served in the U.S. Army during WWII in Europe, Africa and the Middle East. One of the few survivors of the first wave of solders onto Anzio Beach in Italy, he received several awards, including a double Purple Heart. He was honorably discharged in 1946. He married Joyce Bidwell, April 13, 1946, in Morrisville. He was employed by the University of Massachusetts Amherst Agricultural Department for 21 years. He later drove truck, carrying agricultural products. He retired in 1978 due to acute health reasons. Mr. Corrow enjoyed hunting and fishing. Survivors include four children, Denise Griffith, of Bushnell, Florida, Jeannine Erpelding, of Piermont, New Hampshire, Carlton Corrow, of Lyndonville, Dan Corrow, of Charlottesville, Virginia; 11 grandchildren, 17 great-grandchildren; many nieces, nephews and cousins. He was predeceased by his wife of 53 years; and all his siblings, twin sister Ona Miller, Gertrude DePaolo, Archie, Clayton “Junie” Jr., Maylo and Irene Corrow. The graveside service in Fairview Cemetery in Hardwick will be announced at a later date. In lieu of flowers, memorial contributions may be made to help a veteran at: Voluntary Services, VA Medical Center, 215 North Main St., White River Junction, VT 05001. Arrangements are by Northern Vermont Funeral Service, Hardwick. For online condolences, visit northernvermontfuneralservice.com