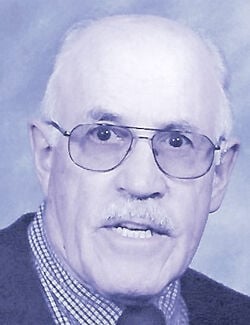 Manuel A. Piro EAST MONTPELIER — Manuel A. Piro, age 95, of Williamstown and East Montpelier, died on Feb. 15, 2021, at the Barre Gardens, surrounded by his family. He was born on Dec. 5, 1925, in Williamstown, Vermont, the son of Felix and Hijinia (Pascual) Piro. He was orphaned at an early age and attended Kurn Hattin Homes in Westminster. He was also raised by his sister, Anita Piro (later Fernandez), graduating from Montpelier High School and UVM with a degree in agriculture. He was one of seven children and is survived by his twin brother, Stephen. He sold agricultural machinery and was interested in agriculture and farmers. He served in the U.S. Navy during World War II. On May 26, 1951, he married Marilyn Ormsbee in East Montpelier Center and they had three children: Ronda Lepene (Glenn) of Rochester, New Hampshire; Edward Piro (Donna) of East Montpelier; and Ronald Piro (Jeanne) of Essex. He had four grandchildren and seven great- grandchildren. Mr. Piro enjoyed fishing, hunting rabbits with beagles, gardening and watching football. For years, he and Marilyn raised dairy goats. He sang in the choir at the First Presbyterian Church of Barre and had sung in other area groups over the years. He was predeceased by his parents and his siblings, including Anita Fernandez, Antonio Piro, Felix Piro, Mary Carpenter and Joseph Piro. Arrangements are being handled by Guare and Sons Funeral Home and Cremation Service. Online condolences may be left at www.guareandsons.com. A graveside service will be conducted at a later date to be announced.

Eddie.. Sorry to read of your dad's passing. He was always nice ot us kids. Dana Barber

Marilyn, Please accept my condolences on the death of your husband. I know how close you were, and how much he will be missed. If and when the Paletteers finally get going with real shows we will miss his presence by your side. Bob Murphy