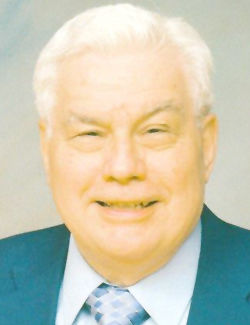 Leonard Normandeau BARRE — Leonard Normandeau of Barre, Vermont, passed away Sunday, Feb. 9, 2020. Born in Montpelier, Vermont, on May 8, 1935, the son of Maurice and Clara Anna Normandeau, he was 84 years of age. He attended Saint Michael’s High School, graduating in 1953. There, he met his wife of 58 years, Rosemary White Normandeau. Leonard attended UVM for a short time before enlisting in the Navy for four years. It was there he began his life career as a mechanical engineer. Upon leaving the Navy, Leonard went to work for the National Cash Register Co. After years of service, and learning the trade to a level of expertise, he and a colleague started their own business, Point of Sales Systems. Leonard took the skill one step further by opening his own business, Cashtronics, in the heart of Barre for 35 years. He would still be tinkering “down at the office” if his health had remained. Leonard and Rosemary raised six children. They spent most summer vacations camping throughout New England and Canada with family and friends until they could no longer pack the trailer and passed the tradition onto their children. Leonard grew up on Lake Champlain, calling South Hero his second home. There, he learned to love the water and was an avid water skier, fisherman and snorkeler. He also enjoyed spending time in the fall at hunting camp in Tunbridge. He may not have been the best hunter, but Leonard could fix just about anything and kept the camp going for many years. Leonard was very active in his community, including a term as a Barre alderman. He also was a proud member of several local clubs, including The Elks, The Canadian Club, Mutuo, VFW, and American Legion Post #10 of Barre, Vermont. He served in The Elks as Exalted Ruler, County Commander and Elk of the Year. His roles at the American Legion included Post Commander, District Commander and their Finance Officer. Leonard was also a big fan of the dinners served at the Mutuo! He will miss, and be missed by, friends he had come to know being part of these civic groups. Leonard was predeceased by his wife, Rosemary, and their infant son, Phillip. He is survived by his sisters, Annette Safford of South Hero, Vermont, and Vero Beach, Florida, Teresa Orr and husband Bill of Barre, Vermont, and a brother, Andrew Normandeau and wife Cindy of Palonminas, Arizona; his six children, Carl Normandeau and wife Lauri of Yorktown, Virginia, Carol Breen of Kirby, Vermont, Nancy Clough and husband Jonathan of Dalton Gardens, Idaho, Kevin Normandeau and wife Jamie of Hopkinton, Massachusetts, Ellen Bowen and husband Russell of Derby Line, Vermont, Daniel Normandeau of Barre, Vermont; his seven grandchildren, Sean, Chelsea, Meghan, Aimee, Joshua, Rose, Justin, and two great-grandchildren, Oliviah and Castleman; as well as, many wonderful cousins, aunts, uncles and in-laws. There will be no calling hours. A memorial will take place on Saturday, March 14, at the American Legion Post #10 in Barre, Vermont, from 12-4 p.m. Charitable donations can be made in Leonard’s name to the American Legion supporting the Boys State Program, The Law Cadet Training Program and the 40 & 8 Nurses Training Program. Send donations in care of Melvin McKnight, Voiture Locale 646 Barre Post #10, P.O. Box 198, Barre, VT 05641. Memories and condolences may be shared with family at ceanbreen@gmail.com.

To the Normandeau family please except my deepest sympathies on your fathers passing. He and I worked side by side for many years at Post 10. Shared many trips to Legion functions. I will miss him.